Colorectal cancer (CRC) is the third most commonly diagnosed cancer and the fourth leading cause of cancer-related death worldwide[1]. More than 50% of patients with CRC experience recurrence or metastases despite of curative operations[2]. Cytotoxic drugs applied as monotherapy or combined with monoclonal antibodies targeting proangiogenic vascular endothelial growth factor (VEGF) and epidermal growth factor receptor (EGFR) have been shown to prolong survival[3,4]. However, a proportion of patients gain little or even no benefit from these therapeutic regimens[5]. These facts underline the need to increase knowledge about special phenotypes, somatic genetic alterations and signaling pathways, which can be translated into prognostic markers or new molecularly defined targets for therapy of CRC.

Enteroendocrine cells comprise approximately 1% of epithelial cells in the gastrointestinal system and represent the largest population of hormone-producing cells in the body[9].

Detailed investigation revealed that enteroendocrine precursor cells differentiate immediately from self-renewing Lgr5+ intestinal stem cells[10]. This lineage differentiation depends on a regulatory cascade involving Notch signaling[10], the hairy enhancer of split (HES) transcription repressor and proendocrine basic helix-loop-helix (bHLH) transcription factors[11]. Expression of proendocrine bHLH factors, which is positively influenced by inactivation of Notch signaling[11], enables cells to differentiate toward divergent subsets of mature hormone-producing endocrine cells[12,13]. Several key transcription factors are involved in the regulation of enteroendocrine cell differentiation[14], which takes place within the crypts. Completely differentiated enteroendocrine cells are mainly determined to migrate upward along the villus as mature hormone-producing cells[12,13]. However, a small population of enteroendocrine cells migrates downwards to the bottom of the crypt or stays localized at the crypt base[15], where they reside in a Wnt signaling active zone and express both stem and postmitotic mature endocrine cell markers[16]. In both, intestinal and enteroendorine cell populations, expression of stem cell markers and continuous exposure to Wnt signaling could be hallmarks of cells, which are susceptible to neoplastic transformation[16,17].

However, data from a mouse model indicate that probably not these terminally differentiated enteroendocrine cells, but their early precursors respond to abnormal Wnt signaling by developing serotonin-expressing adenomas of the small intestine[18]. The concept that exocrine and endocrine components of CRC have the same cellular origin is supported by studies on mixed adenoneuroendocrine carcinomas (MANEC) and neuroendocrine carcinomas with minor associated exocrine components, which could demonstrate that both components share somatic mutations in several genes as APC, TP53, DCC, KRAS, BRAF, ATM, CTNNB1, ERBB4, JAK3, KDR, RB1, BCL9, FOXP1[19-22] and display identical LOH pattern on different chromosome loci as 5q, 17p, 18q[23]. Evidence of an additional mutation (SMARCA4)[22] or LOH involving 6q, 11p, 18q, APC marker and chromosome 3[23] in the endocrine tumor cell population could indicate that this component corresponds to a higher grade transformation of the tumor[20].

According to these data from mouse and human models, higher grade tumor transformation via development of neuroendocrine compartments can occur in every stage of intestinal or colorectal carcinogenesis and, furthermore, it could be even therapy-related. Probably both, pre- and postoperative as well as cytotoxic and radiation therapy could induce trans-differentiation in carcinomas with completely developed phenotype as indicated by the finding of increased neuroendocrine cells in a subset of distant metastatic compared to primary colorectal carcinomas[24] and in neoadjuvant treated compared to untreated rectal carcinomas[25]. This trans-differentiation from non-neuroendocrine to neuroendocrine tumor cells has already been proven for prostate cancer in an androgen-deprived environment[26,27] and is essentially associated with the phosphatidylinositol 3-kinase-Akt-mammalian target of rapamycin (PI3K-Akt-mTOR) pathway[28]. Studies on both experimental and human sporadic neuroendocrine tumors (NETs) and on familial syndromes, in which NETs arise, point to the involvement of mTOR pathway components in neuroendocrine tumorigenesis in general[29]. Proven or putative activators of the mTOR pathway are mutations in upstream regulators of mTOR (PTEN and TSC2) and overexpression of a microRNA (miR-21) that targets PTEN and reduces its expression[29-31] as displayed in Figure 1 (modified according to Cingarlini et al[29] and McCubrey et al[32]). The association between neuroendocrine trans-differentiation and mTOR pathway could be important for new targeted therapy regimens as discussed later in this review. 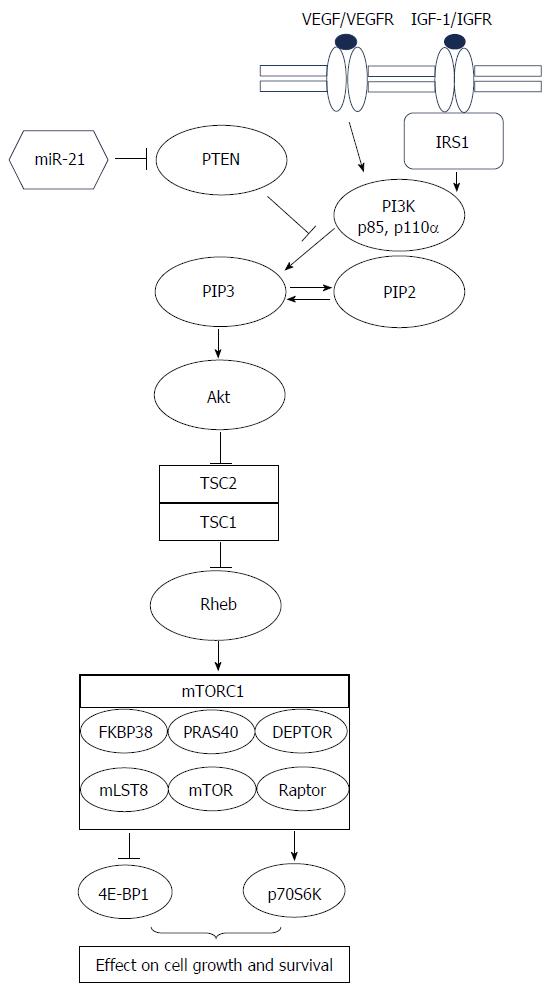 Neuroendocrine cells in non-neoplastic and neoplastic tissue of the gastrointestinal tract and nerve elements express a panel of identical antigens, which are used as neuroendocrine markers[33]. The markers synaptophysin, chromogranin A, B and C, HISL-19, neuron-specific enolase (NSE), the proprotein convertases PC2 and PC3, the lymphoreticular epitope Leu-7, and the neural cell adhesion molecule (or CD56) are sufficient to reveal neuroendocrine differentiation[33,34] independent of hormone production[35]. An example for synaptophysin expression in a colorectal adenocarcinoma is displayed in Figure 2. In addition, syntaxin1, VAMP2, SNAP25, alpha/beta-SNAP[36] and L-dopa decarboxylase (DDC)[37] have been used as neuroendocrine markers. In the pre-immunohistochemistry era, the Churukian-Schenk argyrophil stain[38] and the Grimelius stain[39] were applied to demonstrate neuroendocrine cells, which are argyrophilic. The currently known 15 neuroendocrine cell types of the gastrointestinal tract and pancreas produce different hormones, but all of them express the general neuroendocrine marker synaptophysin[40]. 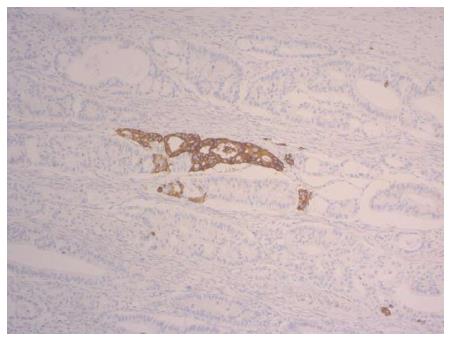 In accordance with the consensus guidelines of the European Neuroendocrine Tumor Society (ENETS)[41,42], the current WHO classification for gastrointestinal neuroendocrine tumors[43] applies a grading system based on mitotic activity and the percentage of Ki-67 labeled proliferating cells: Grade 1, grade 2 and grade 3 (= neuroendocrine carcinoma) are defined by mitotic counts of < 2/10 high power fields (HPF), 2-20/10 HPF and > 20/10 HPF, respectively, and/or by Ki-67 indices of ≤ 2%, 3%-20% and > 20%, respectively. A fourth group, mixed adenoneuroendocrine carcinoma (MANEC) is morphologically recognizable as both gland-forming epithelial and neuroendocrine phenotype, with each component representing at least 30% of the lesion[43]. An additional category considering neuroendocrine differentiation less than 30%, but above the level reported for normal colorectal epithelium (> 1 cell/mm2[44,45], > 2%[36]) similar to that proposed previously by Jansson et al[46] has not been defined by the current WHO classification[43]. However, a detailed study on colorectal tumors with mixed glandular-neuroendocrine differentiation[47] revealed that also neuroendocrine tumor components comprising less than the currently used 30% cut off could have negative impact on the clinical course and patient outcome, which sets the occasional finding of isolated neuroendocrine cells in colorectal cancer into a new focus.

Chromogranin A and synaptophysin are the most frequently used markers to study the link between neuroendocrine differentiation and clinicopathological characteristics. These markers are expressed in divergent patterns: Co-expression of chromogranin A and synaptophysin[63,65] occurs as well as predominance of one marker concomitant with absence of the other marker[65,66].

The assumption of a causal relationship between neuroendocrine differentiation and tumor differentiation is growing stronger after introduction of a new histologic grading system based on the number of poorly differentiated cell clusters (PDC) in CRC[72,73]. In a study of 20 consecutive CRCs with high grade PDCs (≥ 10 clusters, grade III CRCs), the PDCs, but not the glandular part expressed synaptophysin[74]. This could be the morphologic correlate for the previously discussed “trans-differentiation”, which initiates the development of a more aggressive tumor[20].

The presence of neuroendocrine cells in the proliferative compartments of gastrointestinal adenocarcinomas is well-documented[38,63]. Moreover, according to recent knowledge obtained from an adult Drosophila midgut model, enteroendocrine cells could function as local regulators of intestinal stem cell proliferation through modulation of the mesenchymal stem cell niche[75]. These findings could hint at the importance of neuroendocrine cells for both, maintenance and progression of tumors, thus contributing to the development of CRC with high survival potential and aggressiveness.

Further evidence for an indirect impact of neuroendocrine cells on the clinical outcome of CRC is given by the previously published link between chromogranin A/antioxidant enzyme co-expressing CRC cells and unfavorable prognosis, probably due to activated antioxidant defense and higher metabolic activity of the tumors[76]. In addition, high expression of MTOR or its downstream targets p-RPS6KB1, p-RPS6 and p-EIF4EBP1 is associated with adverse clinical outcomes in neuroendocrine tumors[77], but this link has not been investigated for neuroendocrine foci within sporadic CRC.

Neuroendocrine differentiation has been recognized as result of therapy and is getting into the focus of oncologist as target for new treatment approaches.

Shia et al[25] demonstrated an increased frequency and density of cells with an endocrine phenotype in rectal adenocarcinomas treated with neoadjuvant radiochemotherapy and found that the extent of endocrine cells appeared proportional to the degree of treatment response. This therapy-related endocrine differentiation of tumor cells could be induced by cytotoxic insult[25].

The approval of new drugs for the treatment of advanced pancreatic neuroendocrine tumors[6-8] harbored the possibility to extend the therapeutic spectrum also for neuroendocrine differentiated tumors beyond the pancreaticobiliary tract. Everolimus plus octreotide long-acting repeatable (LAR) showed significant benefits and improved outcomes for patients with advanced colorectal neuroendocrine tumors[78]. Phase I trials including CRC patients demonstrated a positive effect on stable disease for one of these drugs, everolimus, when it was combined with cetuximab[79] or with 5-fluorouracil/leucovorin (5-FU/LV) or with mFOLFOX6 (5-FU/LV + oxaliplatin)[80]. Everolimus inhibits the PI3K/PTEN/Akt pathway by connecting to the FK-506 binding protein 12 to block mTOR (mammalian target of rapamycin) activation[79]. Considering a possible importance of the PI3K-Akt-mTOR pathway for neuroendocrine differentiation[28], neuroendocrine cells within sporadic CRC could be the putative target for mTOR-inhibitor therapy (for example everolimus). The published pharmacodynamics trials[79,80] did not consider special CRC phenotypes. However, according to new insights into genotype-phenotype correlations, pretreatment histomorphological characterization of CRC could possibly help to increase efficacy of mTOR-inhibitor therapy.

A possible role of neuroendocrine differentiation as prognostic marker and therapeutic target in sporadic colorectal cancer should be further elucidated by large cohort studies.