Homocysteine is an amino acid generated metabolically by the S-adenosylmethionine-dependent transmethylation pathway. In addition to being a well-known independent risk factor for coronary heart disease, is also a risk factor for cancer. Patients suffering from inflammatory bowel diseases (IBD) including ulcerative colitis and Crohn’s disease are at increased risk of developing colorectal cancer in comparison to healthy individuals. Furthermore, the risk of hyperhomocysteinaemia is significantly higher in IBD patients when compared with controls. In the present article, we review the mechanisms in which hyperhomocysteinemia may contribute to increased risk of colorectal cancer in IBD patients.

Core tip: There is growing evidence suggesting hyperhomocysteinemia to be associated with increased colorectal cancer risk. Taking this into account that hyperhomocysteinemia and its related contributors are prevalent among patients with inflammatory bowel disease, we suggest performing well designed epidemiological, experimental, and clinical trial studies to investigate such association in these patients.

Inflammatory bowel disease (IBD) is a chronic relapsing-remitting immune disorder of unknown etiology that afflicts millions of individuals throughout the world with debilitating symptoms, which impair performance and quality of life[1]. IBD is precipitated by a complex interaction of environmental, genetic, and immunoregulatory factors. Higher rates of IBD are seen in northern, industrialized countries[2]. Recurrent inflammation with ulceration and tissue restitution confers an increased risk of colorectal cancer in both ulcerative colitis (UC) and Crohn’s disease (CD)[3]. Although colorectal cancer occurs in a minority of IBD patients (1%), it carries a high mortality and accounts for 20% of IBD-related mortality[4].

Homocysteine is a sulfur-containing amino acid derived from the metabolism of methionine via methyl group metabolism[5]. There is little doubt that hyperhomocysteinemia plays a role in the development of cardiovascular disease. This is not only supported by human population studies identifying it as an independent risk factor, but strong evidence resides in animal models, as well[5]. More recently, a relationship between hyperhomocysteinemia and increased risk of different cancers has been indicated[6-11]. In the present article, we review the association between hyperhomocysteinemia and increased risk of colorectal cancer in IBD and the possible mechanisms.

IBD, including UC and CD, is characterized by chronic inflammation of the gastrointestinal tract in genetically susceptible individuals that are exposed to environmental risk factors[12]. CD may affect all parts of the gastrointestinal tract, from mouth to anus, but most commonly involves the distal part of the small intestine or ileum, and colon. UC results in colonic inflammation that can affect the rectum only (proctitis) or can cause continuous disease from the rectum proximally, to involve part of or the entire colon. Clinical symptoms include diarrhea, abdominal pain, gastrointestinal bleeding, and weight loss[13]. IBD has become one of the most common chronic inflammatory conditions worldwide[14]. The incidence and prevalence of IBD are increasing with time and in different regions around the world, indicating its emergence as a global disease[12]. In Canada, there are approximately 280000 patients with medically diagnosed IBD, which accounts for 0.8% of the population[15]. Although IBD has long been considered a disease that affects predominantly Western populations, recent data have shown significantly higher rates in Asians and time trend studies have shown an increase in its incidence across Asia[16]. IBD is mostly prevalent in young adults and currently is not curable, with patients usually requiring lifelong medication and may undergo devastating surgeries[17].

Homocysteine is a non-protein-forming, sulfur amino acid whose metabolism is at the intersection of two metabolic pathways[24]: remethylation and transsulfuration (Figure 1). In remethylation, homocysteine acquires a methyl group from N-5-methyl-tetrahydrofolate (MTHF) or from betaine to form methionine. The reaction with MTHF occurs in all tissues and is vitamin B12-dependent, while the reaction with betaine is confined mainly to the liver and is vitamin B12-independent. ATP then activates a considerable proportion of methionine to form S-adenosylmethionine (SAM). SAM serves primarily as a universal methyl donor to a variety of acceptors including guanidinoacetate, nucleic acids, neurotransmitters, phospholipids, and hormones. S-adenosylhomocysteine (SAH), the by-product of these methylation reactions, is subsequently hydrolyzed, thus regenerating homocysteine, which then becomes available to start a new cycle of methyl-group transfer. In the transsulfuration pathway, homocysteine condenses with serine to form cystathionine in an irreversible reaction catalyzed by the pyridoxal-5’-phosphate (PLP)-containing enzyme, cystathionine β-synthase (CBS). Cystathionine is hydrolyzed by a second PLP-containing enzyme, gamma-cystathionase, to form cysteine and alpha-ketobutyrate. Excess cysteine is oxidized to taurine and inorganic sulfates or excreted in the urine. Thus, in addition to the synthesis of cysteine, this transsulfuration pathway effectively catabolizes excess homocysteine which is not required for methyltransfer, and delivers sulfate for the synthesis of heparin, heparan sulfate, dermatan sulfate, and chondroitin sulfate. It is important to note that since homocysteine is not a normal dietary constituent, the only source of homocysteine is methionine[25]. 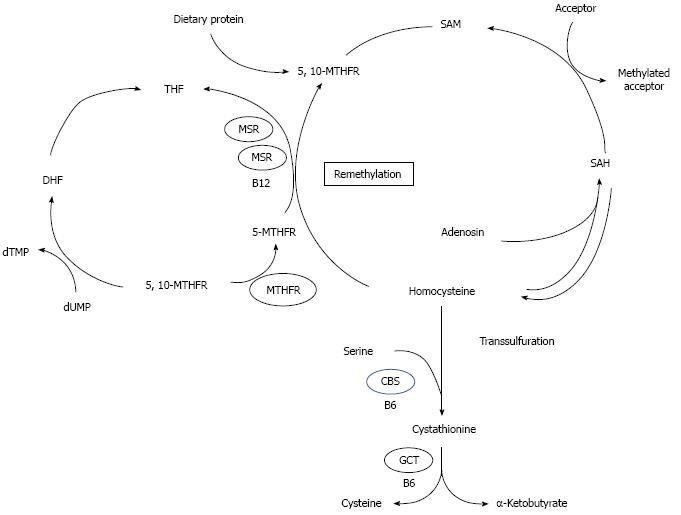 Two enzymes and three vitamins play a key role in the regulation of circulating homocysteine levels. Of the enzymes, cystathionine-β-synthase controls the breakdown of homocysteine to cystathionine in the transsulfuration pathway, while methylene tetrahydrofolate reductase (MTHFR) is involved in the remethylation pathway, in which homocysteine is converted back to methionine. Folic acid, vitamin B6 and vitamin B12 are essential cofactors in homocysteine metabolism and a lack of them due to a deficient diet or disease can produce elevated plasma homocysteine[26]. In addition, a genetic defect in one of the enzymes of homocysteine metabolism can lead to metabolic disruption and potentially to hyperhomocysteinemia[24]. Of the gene defects, the most common is the C-to-T substitution at nucleotide 677 in the coding region of the gene for MTHFR, the so-called thermolabile variant. There is an elevated homocysteine concentration and a decreased plasma folate concentration in the homozygous mutant genotype of C677TMTHFR gene[26].

It should be noted that in addition to the above mentioned key enzymes and vitamins, a variety of other factors affect the regulation and function of these enzymes, including diet, age, physiological state, and hormonal imbalance. Moreover, and in addition to the MTHFR C677T polymorphisms, the majority of these enzymes exhibit polymorphic forms that certainly have the potential to influence homocysteine balance for specific individuals, as has been discussed[27].

ROLE OF HYPERHOMOCYSTEINEMIA IN CANCER DEVELOPMENT

Many malignant cells are methionine dependent, resulting from the inability of malignant cells to convert homocysteine to methionine[28]. Elevated total homocysteine could be an early marker of carcinogenesis and a sensitive marker for detecting recurrence. The change of serum levels of homocysteine paralleled that of different tumor markers in cases of ovarian, breast, pancreatic and colon cancer suggesting that serum total homocysteine level, like tumor markers, reflected the tumor cell activity or the rapid proliferation rate of tumor cells. In addition, hyperhomocysteinemia caused by the proliferation of tumor cells was also demonstrated from the study of cell tissue cultures[28].

Several biochemical changes indicate that elevated homocysteine in blood creates a risk for cancer, and it is likely that hyperhomocysteinemia is a risk factor for carcinogenesis. Hyperhomocysteinemia is frequently associated with folate deficiency. In fact, homocysteine has become a sensitive marker for the deficiency of folate and the majority of the cancer risk derived from hyperhomocysteinemia is likely to be related to folate status. Polymorphism of MTHFR may reduce the production of its product, 5-MTHF, and increase the risk for cancer. 5-MTHF is the major form of folate in serum that provides the methyl group for DNA methylation. Reduction of 5-MTHF results in global genomic hypomethylation[28], which is an early and consistent event in carcinogenesis. Global hypomethylation of the coding and noncoding regions and demethylation of repetitive DNA sequences may contribute to the development of cancer through the following mechanisms: chromosomal instability, increased mutations, reactivation of intragenomic parasitic sequences that could be transcribed and moved to other sites, where they could disrupt normal cellular genes mitotic recombination leading to loss of heterozygosity and promotion of rearrangements, aneuploidy, loss of imprinting, and up-regulation of proto-oncogeneses[29]. Hyperhomocysteinemia has been shown to be a potential oxidative stress indicator via its impact on folate status. The overproduction of oxygen free radicals generated from the oxidation of homocysteine causes of endothelial injury and DNA damage. As reduced free homocysteine contains a free sulfhydryl group, free radicals including hydrogen peroxide can be generated upon oxidation of homocysteine, forming a disulfide linkage with free sulfhydryl group of albumin, cysteine or homocysteine. Actually, the plasma level of reduced free homocysteine affects and enhances oxidative stress. The endogenous attack on DNA by hydrogen peroxide and oxygen free radicals may cause gene mutations such as P53 and ras gene, and eventually lead to carcinogenesis[28,30,31]. However, a recent case-control study by Chiang et al[32] indicated that that increased homocysteine concentration is strongly associated with the risk of colorectal cancer independently of oxidative stress indicators and antioxidant capacities.

Another mechanism by which homocysteine might predispose to cancer is the activation of proinflammatory genes due to region-specific hypomethylation. Results of in vitro and in vivo experiments have suggested that homocysteine might provoke intestinal mucosal injury by modulating TNF-α-mediated cytotoxicity. Indeed, plasma homocysteine has been regarded as a determinant of TNF-α in pathological conditions characterized by low-grade inflammation and targeting the TNF pathway can significantly reduce homocysteine, suggesting a role for this cytokine in homocysteine metabolism[33]. Finding out the biological mechanisms in which hyperhomocysteinemia plays its carcinogenic effects requires further investigations including well-designed experimental studies.

HYPERHOMOCYSTEINEMIA IN THE PATHOGENESIS OF COLORECTAL CANCER

It has been shown that homocysteine enhances growth of colon cancer cells in culture and the growth-promoting effect of homocysteine is reversed by folate[42]. In 1999, Kato et al[43] published the first epidemiological study showing the relationship between biological markers for folate status and colorectal cancer risk among women. Since 1999, different studies that have investigated the potential role of homocysteine status in the pathogenesis of colorectal cancer reported controversial results.

One of the most promising molecular markers of outcome that have been investigated in colorectal cancer is microsatellite instability (MSI). Approximately 15% of colorectal cancers are characterized by MSI, reflecting inactivation of the mismatch repair genes. The remaining 85% of colorectal cancers develop from the chromosomal-instability (microsatellite-stable) pathway. In comparison to patients with microsatellite stable tumors, those with tumors having a high degree of MSI (MSI-H) have a significantly better prognosis[59]. A strong association between sporadic MSI-H and plasma homocysteine has been indicated in Danish patients with colorectal cancer[57]. In addition, the authors indicated that systemic folate did not reflect the level of folate in tumor tissue and systemic homocysteine but not systemic folate found to be a biomarker for MSI-H[60]. Hyperhomocysteinemia has also been suggested as the missing link between type 2 diabetes mellitus and colorectal cancer risk[61].

We wish to thank Dr. Paula Robson for her constructive input during darfting this manuscript.