METHODS: Fifty CHB patients with genotypic resistance to ETV at 13 medical centers in South Korea were included for the analysis. All the patients received rescue therapy with the combination of ADV plus ETV (ADV/ETV, n = 23) or ADV plus lamivudine (LMV) (ADV/LMV, n = 27) for more than 12 mo. Patients were monitored at least every 3-4 mo during ADV-based combination therapy by clinical examination as well as biochemical and virological assessments. Hepatitis B virus (HBV) DNA levels were measured by real-time PCR and logarithmically transformed for analysis. Cumulative rates of virologic response (VR; HBV DNA < 20 IU/mL) were calculated using the Kaplan-Meier method, and the difference was determined by a log-rank test. Multivariate logistic regression and Cox proportional hazards models were used to identify independent risk factors significantly associated with short-term and long-term VR, respectively.

CONCLUSION: If tenofovir is not available, ADV/ETV combination could be considered in ETV-resistant patients with low HBV DNA titers, and may be continued if IVR-3 is achieved.

Core tip: Studies regarding optimal treatment strategies for entecavir-resistant chronic hepatitis B are sparse. Tenofovir may be the best option, but it is still not available in many countries. Where tenofovir is not available, adefovir plus entecavir can be considered an alternative treatment option in patients with favorable predictive factors. These factors included lower baseline hepatitis B virus (HBV) DNA levels (< 5.2 log10 IU/mL) and reduction of HBV DNA < 3.3 log10 IU/mL after 3 mo of treatment in our study. The present study will guide the treatment of entecavir-resistant chronic hepatitis B.

Chronic hepatitis B virus (HBV) infection remains an important global health problem, and 15%-40% of infected patients may develop cirrhosis-related complications and/or hepatocellular carcinoma (HCC)[1]. Over the past decades, there have been great advances in the management of chronic hepatitis B (CHB) owing to the development of oral nucleos(t)ide analogues (NAs)[2]. The sustained suppression of serum HBV DNA by these agents has been associated with the prevention of liver disease progression and inhibition of HCC development[3,4]. However, a major shortcoming of these NAs is the high rate of virological relapse when treatment is discontinued[5,6]. Therefore, long-term or indefinite treatment with NAs is needed. Unfortunately, the risk of drug resistance increases in proportion to the duration of NAs therapy[7]. For example, cumulative lamivudine (LMV) resistance rates were reported to be 23% and 71% after 1 and 4 years of LMV therapy, respectively[8,9]. Moreover, NAs discontinuation sometimes results in hepatitis flares that may lead to fulminant hepatic failure and death[10]. Thus, the benefits of therapy are attenuated and subsequent therapeutic options may be limited.

Of the NAs, entecavir (ETV) is one of the most potent and safest antiviral agents for HBV infection, with a superior potency to LMV and adefovir (ADV)[11-13]. A previous study showed that the cumulative probability of ETV resistance in treatment naïve patients remained at only 1.2% after up to 5 years of treatment[14]. However, the rate is higher in LMV-resistant patients[15,16], and it may increase to 51% after 5 years of ETV therapy[14]. Resistance to ETV appears to occur through a two-hit mechanism with an initial selection of the M204V/I mutation followed by amino acid substitutions at rtT184, rtS202, or rtM250[17]. Consequently, for CHB patients with LMV resistance, current international guidelines recommend switching to tenofovir disoproxil fumarate (TDF), adding on TDF, or adding on ADV, but not switching to ETV monotherapy[18,19]. However, earlier international guidelines had recommended switching to 1 mg of ETV per day as a treatment option for CHB patients infected with HBV resistant to LMV due to insufficient clinical data[2,20]. As a result of sequential ETV monotherapy in LMV-resistant patients, resistance to ETV developed in a substantial number of patients currently.

Although there have been few reports on the short-term effects of ADV combination therapy for ETV-resistant HBV infection, especially for that developed after LMV-ETV sequential monotherapy[23,24,27], there is little available clinical information regarding the long-term effects of ADV combination therapy in such patients. Therefore, this study aimed to evaluate the long-term efficacy of combined ADV regimens over 48 wk in CHB patients with ETV resistance.

The study was approved by the Institutional Review Boards of each institution, and informed written consent was obtained from all study participants, or their legal guardian. The protocol conforms to the ethical guidelines of the Declaration of Helsinki.

HBV DNA levels were logarithmically transformed for analysis. Continuous variables were analyzed using the Mann-Whitney U-test, whereas categorical variables were analyzed using the χ2 test. A repeated measure analysis was used to compare HBV DNA level reductions according to ADV combination regimens. Cumulative rates of VR and VBT were calculated using the Kaplan-Meier method, and the difference was determined by a log-rank test. Multivariate logistic regression and Cox proportional hazards models were used to identify independent risk factors significantly associated with short-term and long-term VR, respectively. Candidate variables with a P-value < 0.1 on univariate analysis were entered into the regression analysis. A P-value < 0.05 was considered significant. Statistical analyses were performed using SPSS, version 16 (SPSS Inc., Chicago, IL, United States) and the statistical review of the study was performed by a biomedical statistician.

RESULTS
Baseline characteristics of the patients

A total of 50 patients who met the inclusion criteria were analyzed. The patients’ baseline characteristics are summarized in Table 1. Thirty-seven (74%) patients were men and the median age was 46.5 (22-74) years. Twelve patients (24%) had liver cirrhosis and 47 patients (94%) were positive for HBeAg. The median HBV DNA level was 5.53 (2.81-7.63) log10 IU/mL and 18 patients had elevated serum ALT levels above the upper limit of normal (40 IU/L). The most commonly observed ETV genotypic mutation sites were rt184 and rt202. The median duration of ETV therapy was 24 (13-58) mo. Out of the total 50 patients, 27 received ADV/LMV combination therapy and 23 received ADV/ETV combination therapy. The median duration of ADV combination therapy was 27 (12-45) mo.

Figure 1 shows the changes in mean HBV DNA levels during the first 12 mo of treatment. After the start of ADV combination therapy, serum HBV DNA levels declined continuously with overall mean changes of -2.14 log10 IU/mL, -2.37 log10 IU/mL, and -2.67 log10 IU/mL at months 3, 6, and 12, respectively. The mean reduction in serum HBV DNA levels from baseline to month 12 was significantly greater in the ADV/ETV combination group than in the ADV/LMV combination group (-2.77 vs -2.57 log10 IU/mL, P = 0.028) by repeated measure analysis (Figure 1). During the first year of treatment, VR (HBV DNA levels < 20 IU/mL) and primary non-response were observed in 18 (36%) and 9 (18%) patients, respectively. Eight of the 18 patients who showed elevated serum ALT levels at baseline experienced normalization of serum ALT levels (44.4%). During the first year of ADV combination therapy, HBeAg loss occurred in 6 (12.8%) of the 47 HBeAg positive patients. Of these, one patient experienced HBeAg seroconversion. 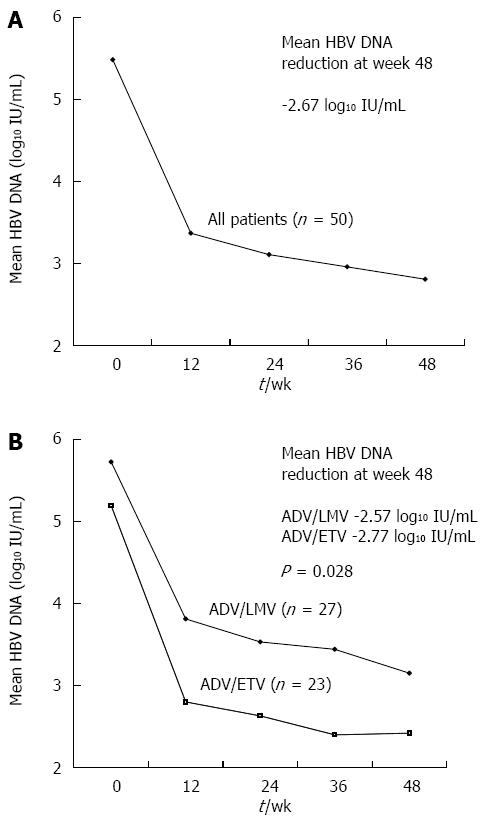 During the long-term treatment period that lasted a median of 27 mo, VR, HBeAg loss, and biochemical response were achieved in an additional 9, 3, and 6 patients, respectively.

A Cox proportional hazards model was used to identify independent risk factors significantly associated with long-term VR. The results were similar to the 1-year results detailed above (Table 4).

Impact of predictive factors on the long-term efficacy of ETV 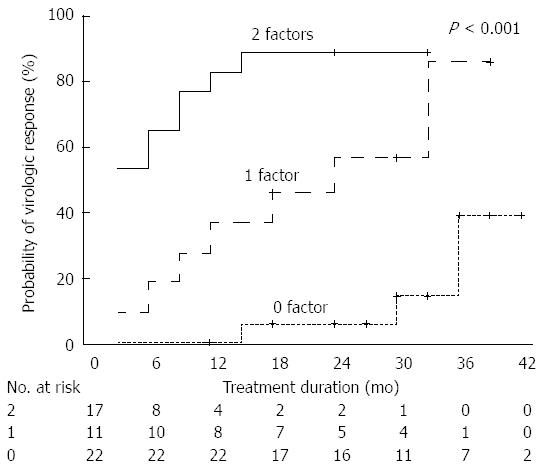 Figure 4 Virologic responses according to the number of predictive factors. Cumulative virologic response rates in patients with 2, 1, and 0 favorable factors are presented (P < 0.001).
Virological breakthrough 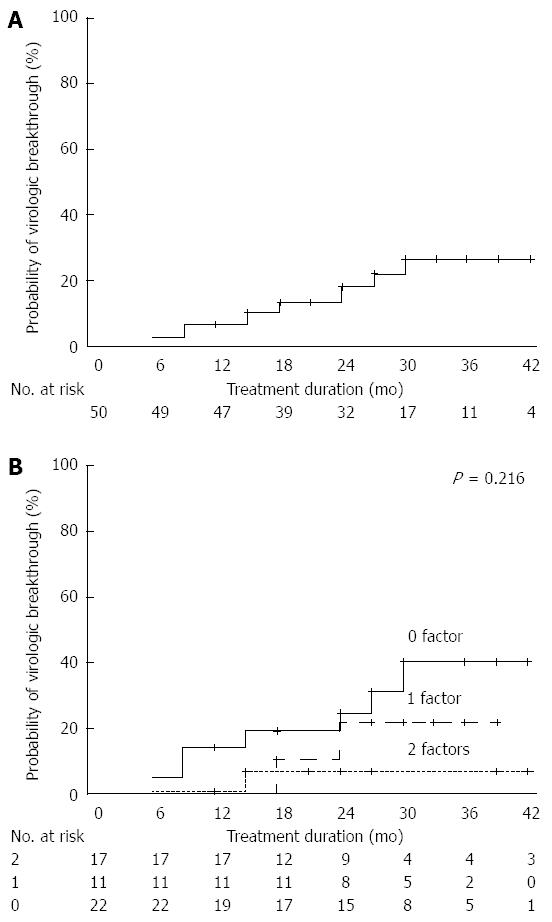 Although highly potent NAs with optimal genetic resistance profiles (ETV and TDF) have been introduced, prior NAs with lower genetic barriers continue to cause drug resistance, which is an important clinical problem. In particular, sequential monotherapy leads to the emergence of multi-drug resistant mutants, a matter of great concern in the management of CHB patients. So far, few studies have evaluated the efficacy of ADV combination therapy for ETV-resistant HBV infection. However, previous studies included small numbers of patients and/or patients with concurrent ADV resistance[21,23,27]. To our knowledge, this is one of the largest studies and the first long-term follow-up study (up to 4 years) of the efficacy of ADV-based combination therapy in ETV-resistant CHB patients.

Previous studies showed VR rates of about 50% to ADV/ETV combination therapy in patients with LMV- and ETV-resistant HBV infection[21,23,24]. In the present study, however, 27 of 50 (54%) patients showed a VR with respective cumulative VR rates of 36% and 68% at 12 and 36 mo. The reason for the relatively high VR in our study may be due to the difference in the study population and follow-up duration compared to previous studies. Our study excluded patients with prior ADV exposure in order to accurately evaluate the antiviral efficacy of ADV-based regimens in those with resistance to ETV, and the patients were followed up for a median of 27 mo (up to 4 years).

In conclusion, an ADV/ETV combination was superior to an ADV/LMV combination, and ADV-based combination therapy was effective in patients with favorable predictors.

In countries where tenofovir is not available, the ADV/ETV combination could be considered an alternative treatment option in ETV-resistant patients with a low HBV DNA titer, and may be continued if IVR-3 is achieved.

Antiviral resistance to hepatitis B virus (HBV) leads to attenuation of the therapeutic benefits and limits subsequent treatment options. Entecavir (ETV) is one of the most potent and the safest antiviral agents with high genetic barrier. Studies regarding optimal treatment strategies ETV-resistant chronic hepatitis B (CHB) are sparse.

Both adefovir (ADV) and tenofovir (TDF) are active against ETV-resistant HBV infection in vitro, but clinical data on the efficacy of ADV or TDF in those patients are lacking. Therefore, additional study is needed to determine optimal treatment strategies in ETV-resistant CHB patients.

Previous few studies regarding the efficacy of ADV combination therapy for ETV-resistant CHB were conducted in small numbers of patients and evaluated short- term efficacy. This study is one of the largest studies and the first long-term follow-up study (up to 4 years). Furthermore, it shows predictive factors for virologic response (VR), which will be useful for guidance of the treatment strategy.

This study results suggest the ADV/ETV combination therapy could be considered an alternative treatment option in ETV-resistant CHB patients, especially in those with favorable predictive factors.

Initial virologic response at 3 mo (IVR-3) is defined as an HBV DNA level < 3.3 log10 IU/mL after 3 mo of treatment and demonstrated as a predictive factor for VR.

Here the authors report original data on long term efficacy of ADV-based combination therapies, i.e., ADV/ETV and ADV/LMV, on 50 CHB patients with genotypic resistance to ETV. They find higher rates of virological response in patients treated with ADV/ETV vs ADV/LMV and they identify low baseline HBV DNA levels and IVR-3 as independent predictive factor for VR. Although its interest is limited to countries where TDF is not available or not reimbursed, this study will be the largest one on this topic, hence worthy of attention and consideration.