Addiction to synthetic cannabinoids (SCs) is a growing social and health problem worldwide. Chronic use of SCs may cause adverse effects in the gastrointestinal system. We describe a very rare case of acute gastric dilatation (AGD) and hepatic portal venous gas (HPVG), with findings of acute abdomen resulting from chronic use of a SC, Bonzai. AGD and HPVG were detected by computerized tomography examination. Patchy mucosal ischemia was seen in endoscopic examination. Despite the findings of an acute abdomen, a non-surgical approach with nasogastric decompression, antibiotic therapy, and close radiologic and endoscopic follow-up was preferred in the presented case. Clinical and radiologic findings decreased dramatically on the first day, and endoscopic findings gradually disappeared over 7 d. In conclusion, this case shows that chronic use of a SC may cause AGD and accompanying HPVG, which can be managed non-surgically despite the findings of acute abdomen.

Core tip: This is the first case of acute gastric dilatation and accompanying hepatic portal venous gas presenting as acute abdomen as a result of chronic use of a synthetic cannabinoid, Bonzai. Despite the findings of acute abdomen, this type of patient can be managed non-surgically with wide spectrum antibiotic therapy and close radiologic and endoscopic follow-up.

Despite the presence of some therapeutic effects of cannabinoids (also called cannabis), addiction to these substances has been known for many decades, and it is a common health problem worldwide[1]. Chronic use of cannabinoids or synthetic derivatives have many negative effects on human health, such as pulmonary, endocrine, and cardiovascular pathologies, as well as cognitive and behavioral disorders[1,2]. The gastrointestinal tract is another target of cannabinoids. Their effects on the gastrointestinal system are mediated by specific receptors in the brain and intestinal tract[3]. Delayed gastric emptying and hyperemesis are defined gastric pathologies of chronic cannabinoid use[2,4], but the extent of gastric effects of cannabinoids are not predictable. We describe an extraordinary case of a young man and his interesting clinical course after being admitted to the emergency room with the signs of acute abdomen.

A 29-year-old man was admitted to the emergency room with abdominal distension and gradually increasing pain over the previous 2 d. In his history, he had been using Bonzai regularly over the last 5 years and was undergoing treatment for addiction. Physical examination revealed abdominal distension, tenderness, defense, rebound, nausea and vomiting. At admission, the laboratory findings were as follows: white blood cell count 18200/mm3, hemoglobin 14.2 g/dL, platelet count 208000/mm3, glucose 240 mg/dL, amylase 382 U/L, aspartate transaminase 25 IU/L, alanine transaminase 17 IU/L, lactate dehydrogenase 224 U/L, and C-reactive protein 27.7 mg/L. An abdominal X-ray showed a very large amount of gas in the fundus. Nasogastric decompression was applied and approximately 6 L of brownish black fluid was discharged. Computerized tomography (CT) examination revealed a huge stomach, elongated towards the pelvis, and accompanying hepatic portal venous gas (HPVG) was detected (Figure 1). There was no evidence of perforation of the luminal organs. Emergency upper gastrointestinal endoscopy was performed immediately. Endoscopic examination showed severe mucosal edema and patchy ischemic areas all around the stomach (Figure 2). The patient was hospitalized and followed up with close radiologic and endoscopic surveillance under wide-spectrum antibiotic therapy, despite the presence of findings of acute abdomen. 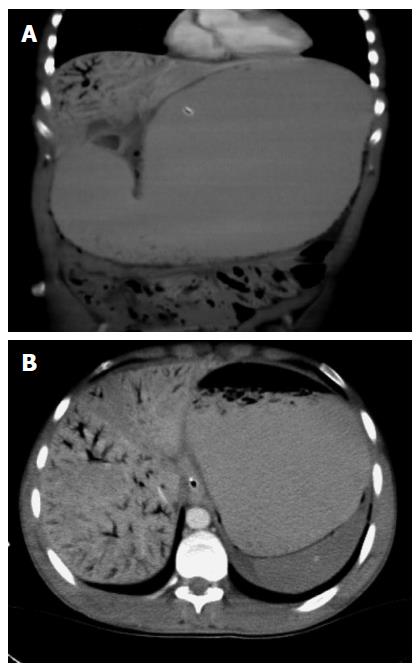 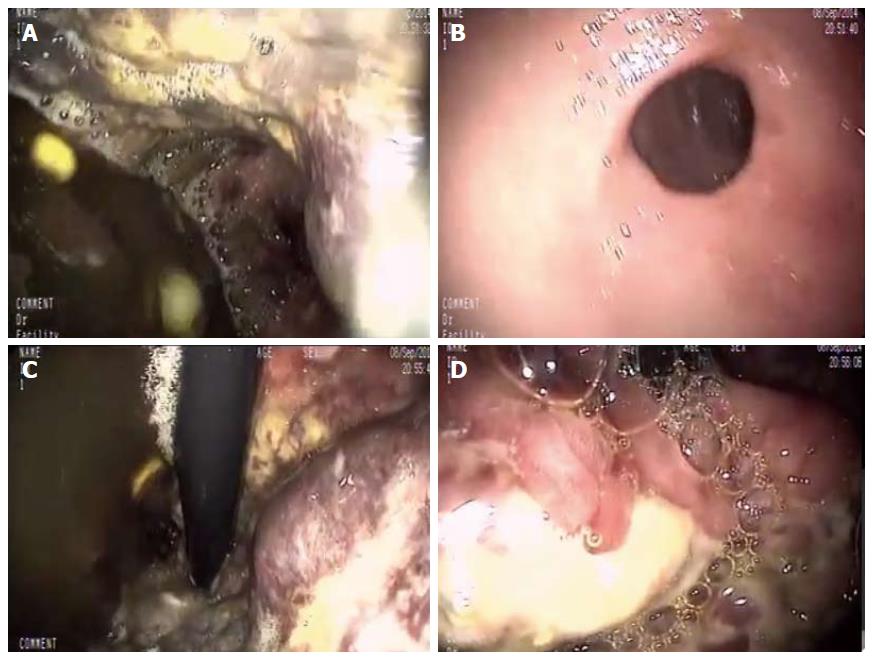 After 24 h, endoscopic findings were almost the same, but clinical findings and HPVG in CT were dramatically decreased (Figure 3). There was a small amount of free peritoneal fluid. A sample was taken from this fluid, with guidance of ultrasonography, and there was no growth in culture. 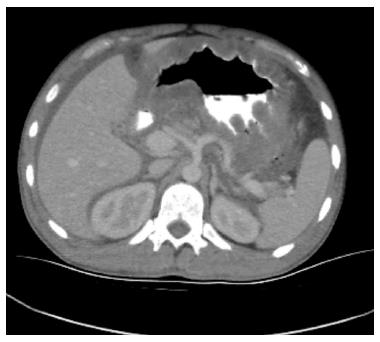 Nasogastric decompression, antibiotic therapy and serial upper gastrointestinal endoscopy were continued, and all the clinical, radiological, and endoscopic findings regressed completely by the 7th d. The patient was discharged on the 8th d.

Although cannabinoids have some therapeutic features, chronic use can cause addiction and many deleterious effects[1]. More than 10 different products are available containing SCs, such as Bonzai aromatic potpourri, Bonzai plant growth regulator, Bonzai Cuba, Bonzai black diamond, Spice, K2, Jamaican gold, and Yucatan fire[5]. Addiction to this type of product has been growing in young adults. According to the World Drug Report from the United Nations Office on Drugs and Crime, SCs have been the leading new psychoactive substances worldwide[6]. SCs were introduced into Turkey in 2010, and these products have become increasingly common in the country[5].

SCs mimic the effects of natural cannabinoids by binding to the cannabinoid binding (CB) receptors. Although CB1 and CB2 receptors are found mainly in neurons and immune cells, respectively, there is evidence for the presence of these receptors along the gastrointestinal tract[3]. The inhibitory effect of cannabinoids and CB1 receptor agonists on gastric motility and contractility has been shown in animal studies[7,8]. Clinically, cannabinoids have been used to treat hyperemesis in patients undergoing chemotherapy, and this effect is mediated by CB1 receptors[9]. Paradoxically, Choung et al[10] and Allen et al[4] have reported an association between chronic cannabinoid use and cyclical hyperemesis. Additionally, cannabinoids can affect the lower esophageal sphincter by binding to CB1 receptors within the nucleus tractus solitarius[11]. As shown, there are different aspects of the effects of cannabinoids on the stomach. In the present case, we saw an extraordinary presentation of chronic SC use. According to our knowledge, this is the first case of acute gastric dilatation and hepatic portal venous gas resulting from SC use. Although, the pathogenesis of AGD is generally not clear, we thought that, in our case, this process should be mediated by binding to CB1 receptors.

HPVG is recognized, not as a specific disease entity, but rather as a diagnostic clue in patients with underlying acute abdominal pathology. The diagnostic features of HPVG on CT imaging include: branching lucencies extending to within 2 cm of the liver capsule, predominantly in the anterior-superior aspect of the left lobe[12,13]. An association of AGD and HPVG is extremely rare; there are few cases reported in the literature. In 1985, Radin et al[13] reviewed very early reported cases. Of four AGD-HPVG cases, conservative treatment with nasogastric decompression was successful in three cases[13]. In more recent reports, surgical exploration was associated with successful results[14-16]. The pathogenesis of HPVG is also not clear. There are two hypotheses regarding its cause; microbe-derived gas production and absorbed intraluminal air[17]. We could not determine the precise cause of HPVG in our case. In the literature, necrotizing enterocolitis, bowel necrosis, digestive tract dilatation, inflammatory bowel disease, gastric ulcer, cholangitis, pancreatitis, and endoscopic interventions have been reported as a cause of HPVG[18,19]. Whatever the mechanism, it is now clearly known that the prognosis is related to the primary pathology and is not influenced by the presence of HPVG[19].

The stomach is resistant to ischemia and necrosis due to the rich collateral blood flow. However, if a sudden increase in gastric pressure occurs, gastric ischemia, necrosis, and perforation can occur[20]. In our case, we endoscopically detected mucosal ischemia, which was an indicator of impaired perfusion of the stomach. However, there was no evidence of vascular pathology (thrombus or embolus) or obstruction of the tract. There are some challenges in deciding to perform surgery or follow-up due to the chronic use of SC, which has deleterious effects on other organs[1,21]. We finally opted for close clinical, radiologic, and endoscopic follow-up.

In conclusion, this is an extraordinary case of AGD with gastric mucosal ischemia and HPVG resulting from chronic use of a SC. Although the patient’s clinical diagnosis included acute abdomen, which is a specific indication for surgical exploration, a conservative approach of nasogastric decompression, wide spectrum antibiotic therapy, and daily endoscopic follow-up was successful. In patients with AGD without vascular or obstructive pathologies, the presence of HPVG and even gastric mucosal ischemia should not be considered as a particular indication for emergency surgery.

A 29-year-old male patient presented with severe abdominal pain; the most striking feature in his medical history was chronic use of a synthetic cannabinoid, Bonazi.

Upon physical examination, there were findings of acute abdomen.

Nasogastric decompression, antibiotic therapy, and serial upper gastrointestinal endoscopy were performed, and all the clinical, radiological, and endoscopic findings regressed completely by the 7th d.

The effects of cannabinoids on the gastrointestinal system show great variation. The combination of acute gastric dilatation (AGD) and HPVG is a very rare entity. HPVG is not a sign of a poor prognosis.

Bonzai is a trademark of a synthetic cannabinoid which is commercially available in Turkey.

This case report presents an extraordinary result of chronic use of synthetic cannabinoid. AGD and HPVG can be seen in such a situation. The authors recommend that abdominal CT and upper GI endoscopy should be first-line modalities for diagnosis, and conservative therapy with close endoscopic follow-up should be considered as first choice for treatment.

The case is very interesting for readers. In the manuscript they describe a rare case of AGD accompanied by HPVG, presenting as acute abdomen in a 29-year-old man resulting from chronic use of synthetic cannabinoids. The clinical history and diagnostic test are well described and it is easy to follow the flow of the case.