Splenic arteriovenous fistulas (SAVFs) with splenic vein aneurysms are extremely rare entities. There have been no prior reports of SAVFs developing after laparoscopic pancreatectomy. Here, we report the first case. A 40-year-old man underwent a laparoscopic, spleen-preserving, distal pancreatectomy for an endocrine neoplasm of the pancreatic tail. Three months after surgery, a computed tomography (CT) scan demonstrated an SAVF with a dilated splenic vein. The SAVF, together with the splenic vein aneurysm, was successfully treated using percutaneous transarterial coil embolization of the splenic artery, including the SAVF and drainage vein. After the endovascular treatment, the patient’s recovery was uneventful. He was discharged on postoperative day 6 and continues to be well 3 mo after discharge. An abdominal CT scan performed at his 3-mo follow-up demonstrated complete thrombosis of the splenic vein aneurysm, which had decreased to a 40 mm diameter. This is the first reported case of SAVF following a laparoscopic pancreatectomy and demonstrates the usefulness of endovascular treatment for this type of complication.

Core tip: This is the first reported case of a splenic arteriovenous fistula occurring after laparoscopic pancreatectomy and demonstrates the usefulness of endovascular treatment for these fistulas, especially when are associated with splenic venous aneurysms.

Splenic arteriovenous fistulas (SAVFs) with splenic vein aneurysms are extremely rare[1,2] and may be either congenital or acquired. The majority of SAVFs occur after the rupture of a splenic artery aneurysm[2]. Other less common causes include splenectomies, gunshot injuries, congenital development, mycotic infections, and splenoportography[2]. However, to our knowledge, there have been no reports of SAVFs occurring after laparoscopic pancreatectomy. We report the first case of SAVF, which was successfully treated using percutaneous, transarterial embolization of the splenic artery, including the SAVF and drainage vein.

A 40-year-old man underwent a laparoscopic, spleen-preserving, distal pancreatectomy for an endocrine neoplasm of the pancreatic tail. The surgery was performed uneventfully, and there were no complications such as bleeding, pancreatic leakage or infections during the hospitalization. The patient was discharged on postoperative day 7. Three months after surgery, a computed tomography (CT) scan demonstrated an SAVF with a dilated splenic vein measuring 56 mm × 64 mm (Figure 1). The patient’s medical history included diabetes mellitus but no history of splenic artery aneurysm, splenectomy, or trauma. He was asymptomatic, and his blood test results were normal. Because of the rapid enlargement of the splenic vein aneurysm, after consultation with a surgeon, we decided to perform endovascular treatment of the SAVF. 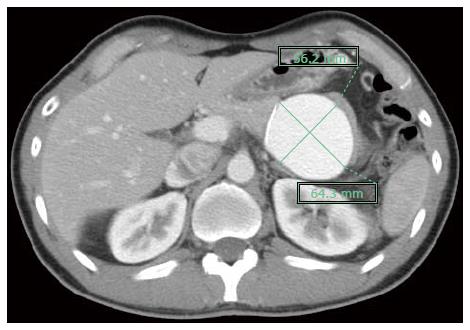 Under local anesthesia, the Seldinger technique was used to place a 5-F sheath (Medikit, Tokyo, Japan) into the right femoral artery. Selective celiac angiography and selective splenic arteriography were performed using a 4-F shepherd-type catheter (Medikit). The angiograms revealed a fistula between the proximal splenic artery and the aneurysm-like, dilated splenic vein (Figure 2A). Contrast medium from the splenic vein aneurysm flowed into the portal vein through the collateral vessels that had developed; the splenic vein main trunk was occluded on the portal vein side (Figure 2B). The flow to the fistula was controlled with a 5-F balloon catheter (Terumo, Tokyo, Japan) placed in the splenic artery. A micro-catheter was advanced to the drainage vein through the aneurysm, and the drainage vein was embolized using 7 detachable coils (Boston Scientific, Tokyo, Japan) (Figure 2C and D). Embolization of the splenic artery, including the SAVF, was then performed successfully using 8 detachable coils (Figure 2E and F). 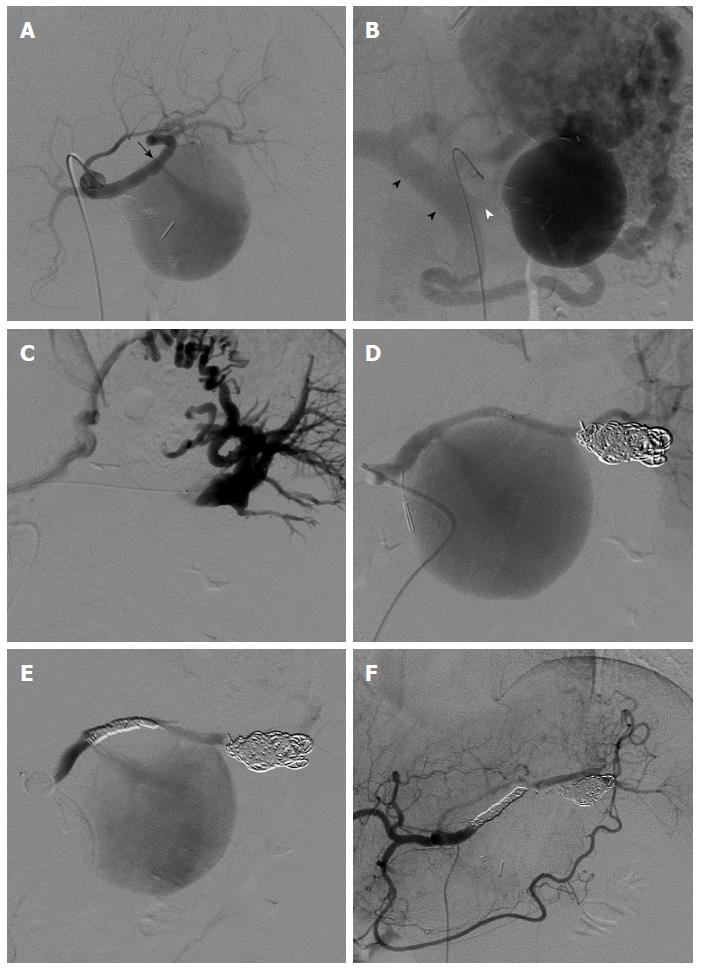 SAVFs are rare, and the most occur after the rupture of a splenic artery aneurysm into the corresponding vein. However, their origins can also be congenital, traumatic (iatrogenic or accidental) or through infection[2-4]. Here, we described the first case of an SAVF with a splenic vein aneurysmal dilatation that occurred after a laparoscopic pancreatectomy. Laparoscopic partial pancreatectomies for pancreatic endocrine tumors were first reported in 1996 by Gagner et al[5] and are now considered to be indicated for that condition[6]. One of the most common complications after a pancreatectomy is pancreatic leakage, which may result in massive hemorrhage. In the present case, a pancreatic leak was considered to be one of the possible causes of the SAVF. SAVFs can be asymptomatic or may result in a variety of portal vein hypertension symptoms, i.e., upper abdominal pain, ascites (35%), esophageal or gastric varices (52%), or splenomegaly (55%)[2,7,8]. Diarrhea, due to abrupt elevation of mesenteric venous pressure, and congestive heart failure have also been described[4,9].

SAVFs can be diagnosed using contrast-enhanced CT and confirmed using celiac or splenic arteriography. An elongated, tortuous splenic artery; early filling of the splenic vein during the arterial phase; dense opacification of the splenoportal venous system; and an aneurysm-like splenic vein are the characteristic findings of SAVFs[2]. Rapid development of an aneurysmal dilatation in the splenic vein, as in our case, is uncommon and may suggest occlusion of the main trunk of the vein on the portal vein side. In the present case, the occlusion may have been caused during the laparoscopic pancreatectomy. The shunt flow from the SAVF could not flow directly to the portal vein due to the splenic vein occlusion; therefore, the pressure in the drainage vein was elevated causing it to enlarge. SAVFs should be promptly treated in high-risk patients with symptomatic or expanding aneurysms.

Traditionally, surgery is used to treat SAVFs[8,10], but the surgical approach often presents technical challenges because of the distal lesion site, adhesion formation, and the presence of numerous portal collaterals[1]. Non-surgical, endovascular treatment of SAVFs has recently been described, particularly for patients with a high risk of surgical complications and for patients with lesions that are difficult to treat surgically[1-3,9,10]. Compared to surgery, endovascular treatment is a less invasive, relatively low-risk, and rapid procedure, regardless of the SAVF location. These advantages (over surgery) strongly support its use for the safe and efficacious treatment of patients with SAVFs.

Aneurysmal exclusion using a stent graft is an option for patients who do not have a tortuous splenic artery. Embolization using an Amplatzer™ vascular plug (AVP; St. Jude Medical, St. Paul, MN, United States) is another option. The AVP can be used safely in high-flow, short-segment arteriovenous fistulas where it is difficult to release coils accurately. The device can be retrieved and repositioned if the initial location is unsatisfactory. In this case, however, we initially controlled the blood flow using a balloon catheter to avoid hemorrhage due to rupture of the fragile splenic artery.

In conclusion, this is the first report of an SAVF occurring after a laparoscopic pancreatectomy and demonstrates the usefulness of endovascular treatment of SAVFs with splenic vein aneurysms.

A 40-year-old man undergoing a laparoscopic, spleen-preserving, distal pancreatectomy presented with no symptoms.

The patient demonstrated a splenic arteriovenous fistula (SAVF) with a dilated splenic vein.

The SAVF, together with a splenic vein aneurysm, was successfully treated using percutaneous, transarterial, coil embolization of the splenic artery, including the SAVF and drainage vein.

SAVFs with splenic vein aneurysms are extremely rare entities. There are no prior reports of SAVFs developing after laparoscopic pancreatectomy.

This is the first report of an SAVF occurring after laparoscopic pancreatectomy and demonstrates the usefulness of endovascular treatment of SAVFs with splenic vein aneurysms.

This is a well-written and adequately documented report of a postoperative arteriovenous fistula, following laparoscopic distal pancreatic resection. The authors complete their report with a comprehensive review of relevant literature evidence. The subject of this case report is relevant to multiple disciplines, including surgeons, gastroenterologists, and interventional radiologists. The differential diagnosis, which might define the therapeutic approach, is of outmost importance.