METHODS: Patients with mid- and low rectal carcinoma (magnetic resonance imaging - based clinical stage II or III) between 2000 and 2009 and treated with curative radical resection were identified. Patients were divided into two groups: PCRT and No-PCRT. Recurrence-free survival (RFS) was examined according to pathologic stage and addition of adjuvant treatment.

Core tip: Strictly speaking, there is no common objective guideline to predict prognosis and give adjuvant treatment according to risk stratification. Patients who show good response were thought to have good prognosis. However, expected value of recurrence-free survival or recurrence rate was not suggested especially in patients who did not show good response to patients receiving preoperative chemoradiotherapy (PCRT). In addition, how to measure the response level was variable. The present study suggests impression of prognosis based on pathologic stage, which is objective, after PCRT and radical resection and show stage-by-stage comparison with those without PCRT to give impression of prognosis by using familiar stage-based prognosis.

Pathologic staging is used to select high-risk patients for adjuvant treatment to reduce disease recurrence and improve survival[1]. Preoperative chemoradiotherapy (PCRT) followed by radical resection is the standard treatment for patients with clinical stage II-III rectal cancer. A tumor down-staging rate of 40%-80% and a pathologic complete response (pCR) rate of 10%-25% can be achieved after PCRT[2-6]. Patients achieving tumor down-staging after preoperative therapy tend to have better local control and increased survival. Conversely, patients with persistent nodal disease after chemoradiation have a very poor prognosis[7-9]. However, there is uncertainty concerning the difference in prognosis according to pathologic stage for patients treated with PCRT. In addition, although several studies have shown that pathologic stage after PCRT (yp stage) followed by radical resection is a significant prognostic indicator, prognostic information is not usually used to inform post-surgical clinical practice for PCRT patients in contrast to patients with rectal cancer who are not treated with PCRT[10-12].

The National Comprehensive Cancer Network guidelines recommend that all patients undergoing PCRT receive postoperative chemotherapy regardless of the pathologic results[13]. This recommendation is based on preoperative clinical staging. Although adjuvant chemotherapy is regarded as the standard treatment[11,14-17] irrespective of the final pathologic stage[11,14-17], evidence supporting the routine use of adjuvant chemotherapy (according to pretreatment clinical stage) for patients with advanced rectal cancer after PCRT is lacking.

In addition, though it has been suggested that patients who do not respond to PCRT have a poor prognosis, the extent of this effect is not clear.

Some studies have indicated that the final pathologic stage is more predictive of long-term outcome (e.g., disease-free survival) than the preoperative clinical stage or degree of down-staging[7,11,18-20]. Thus, it appears plausible to use pathologic stage as a criterion for adjuvant chemotherapy and for formulating a prognosis.

In the present study we compared the prognosis (based on pathologic stage) of patients with advanced rectal cancer who received PCRT with that of patients not treated with PCRT, and evaluated the usefulness of yp stage as an outcome predictor and guideline for adjuvant treatment.

Preoperative clinical staging was based on magnetic resonance imaging (MRI). MRI diagnosis of T3 lesions was based on the presence of an tumor signal intensity extending through the muscle layers into the perirectal fat, with a broad-based bulging configuration, and continuous with the intramural portion of the tumor. A clinical T4 lesion was defined as direct invasion to an adjacent organ. Positive lymph node (LN) status was ascertained from signal intensity, border characteristics, irregular contour, or heterogeneous texture. In addition, diameter larger than 5 mm was used as a predictor of LN positivity. Upfront resection was recommended for patients with obstructive lesion. For patients with cT3-4 and/or N+, tumor involvement to mesorectal fascia was checked using MRI or CT. When it is possible to get clear mesorectal margin by upfront surgery, the current disease status, possible advantage of PCRT, and expected response rate was explained to patient, and patient involve in selection of treatment plan. If mesorectal fascia involvement was suspected, PCRT was recommended primarily. The PCRT regimen comprised pelvic external beam radiation (45 Gy given in 25 fractions over 5 wk) followed, in most cases, by a boost of 5.4 Gy (in 5 fractions) applied directly to the tumor. This boost was delivered as a second daily fraction during the final week of treatment, taking the cumulative radiation dose to 50.4 Gy. Most of the patients were treated with concurrent chemotherapy comprising 5-fluorouracil and leucovorin (FL) and capecitabine and were included in the PCRT group. FL was delivered via two intravenous bolus injections of 5-fluorouracil (375 mg/m2 per day) and leucovorin (20 mg/m2 per day) for 3 d during the first and fifth weeks of radiotherapy. Capecitabine (825 mg/m2) was given twice daily (orally) during radiotherapy. Surgery was performed 6-8 wk after the completion of radiotherapy according to principle of total mesorectal excision.

Adjuvant chemotherapy is recommended for all No-PCRT patients with pathologic stage III disease and those with stage II with risk factors such as lymphovascular invasion, perineural invasion, preoperative obstruction, and perforation. Adjuvant chemotherapy followed by radical resection is recommended for all medically-fit PCRT patients. The usual adjuvant treatment comprised FL for 4 cycles monthly or capecitabine for 6 cycles. Oxaliplatin regimens were delivered at the discretion of the attending physician. In some cases protocol-based concurrent chemotherapy included the addition of irinotecan or bevacizumab. Postoperative follow-up comprised routine physical examination and carcinoembryonic antigen (CEA) assays every 3-6 mo, and cross-sectional imaging every 6-12 mo over a period of 5 years. Colonoscopy was performed at 6-12 mo after surgery and then every 2-3 years thereafter.

A total of 894 patients who underwent curative resection for cT3-4 or N+ (MRI based) mid- and low-rectal cancer during the study period were eligible. Of these, 500 (55.9%) received PCRT. The median patient age was 59 [interquartile range (IQR): 50-66] years, and the majority (63.9%) was male. The median distance of the tumor from the anal verge was 5 (IQR: 3-8) cm, and 49.4% of the patients had low rectal cancer. The median radiation dose was 50.4 (IQR: 45-52.5) Gy. Sphincter-preserving resection was performed for 730 (81.7%) of the patients. The patients in the PCRT group were younger than those in the No-PCRT group, there were more males, and most had a low rectum tumor (Table 1). Sphincter-sparing surgery was performed more frequently in the No-PCRT group. Taking into account only those patients with a low rectal tumor, the sphincter-sparing surgery rates were 62.5% for the PCRT group and 70.9% for the No-PCRT group (P = 0.05; Table 1). Fewer lymph nodes were excised from patients in the PCRT group than from those in the No-PCRT group (median, 13 vs 16, P < 0.001). 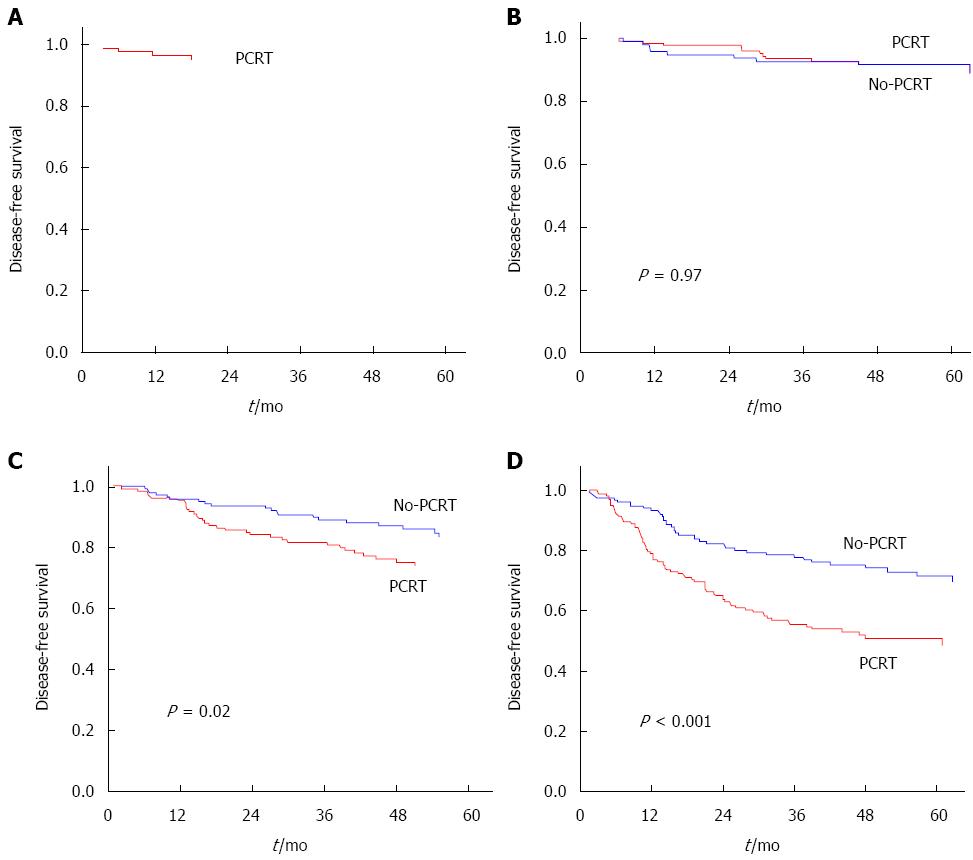 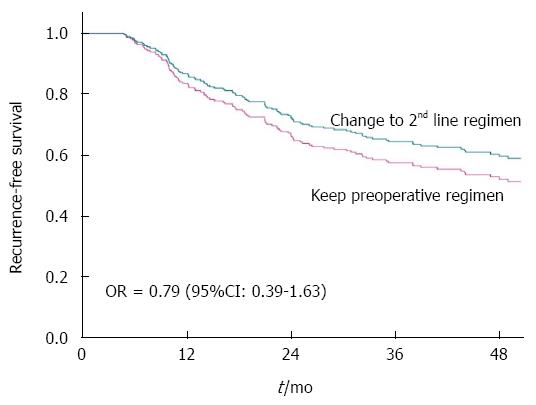 Some studies have found that patients showing a good response after PCRT have a more favorable prognosis, even in those patients with initially clinically node-positive disease[7-9,15,18]. On the other hand, patients with persistent nodal disease after chemoradiation have a poorer prognosis[7-9]. Thus, it is important to ascertain whether the use of postoperative chemotherapy should be decided by clinical stage, or by the definitive pathological surgical stage (ypTNM) following chemoradiotherapy.

The risk of recurrence is high for patients with clinical stage II or III rectal cancer; however, theoretically at least, the risk is not influenced by PCRT because the latter is a local treatment. However, data from this and other studies suggest that the risk of distant and local failure is, in fact, closely associated with the final pathologic stage. Typically a full course of adjuvant chemotherapy is recommended, regardless of the final pathologic stage. There are several reasons for this: preoperative chemotherapy uses a radiosensitizing agent rather than a definitive chemotherapy drug; the seminal randomized trials conducted for PCRT therapy included the use of routine adjuvant chemotherapy; and there may be a presumption that pathological stage is an unreliable prognostic indicator in patients treated with chemoradiotherapy. However, several studies show that pathological stage is in fact a reliable prognostic indicator, and that it may be more accurate than the preoperative clinical stage[7,18-20].

The 5-year RFS for patients showing complete remission after PCRT was comparable to that for patients with tumors confined within the rectal mucosa, which can be successfully treated by endoscopic resection or local excision. Therefore, organ-preserving treatments may be useful for patients showing complete remission after PCRT. In the present study, however, 90.2% of the latter received adjuvant chemotherapy, and all underwent radical resection. Great care should be taken when adopting an organ-preserving strategy in clinical practice.

The present study has several limitations. First, it was retrospective in nature, which may cause a bias towards the identification of metastasis/recurrence. However, we chose RFS as the outcome measure as it is less likely to be subject to selection bias or to be confounded by other parameters. We also used multivariate regression to adjust for other potential confounders. In addition, we included patients diagnosed as cT3-4 or N+ based only on MRI in order to compensate for selection bias because of the variable accuracy of imaging modalities in the local staging of rectal cancer.

Second, very few of the patients treated with PCRT followed by radical resection received an altered second-line adjuvant chemotherapy regimen. Because of this (and the retrospective nature of this study) it would be inappropriate to conclude that using the same adjuvant chemotherapy with concurrent preoperative chemotherapeutic regimen based on clinical stage conferred no survival benefit. In addition, oxaliplatin was used as the adjuvant chemotherapeutic regimen since 2007. The number of patients receiving oxaliplatin, along with the shorter follow-up times for these patients, may have affected the final oncologic outcomes.

In conclusion, the final pathologic stage of patients with advanced rectal cancer treated by PCRT can be used to predict oncologic outcome. Thus, we suggest that intensive adjuvant chemotherapy might be considered for patients showing much poorer outcomes than those who are not treated with PCRT. Further large-scale studies should be performed to examine the reliability of pathologic stage as a prognostic indicator and guideline for adjuvant treatment in patients with rectal cancer treated by PCRT based on pathologic stage. It will be important to establish a standard to compare prognoses and to conduct clinical trials with the hope of influencing prognosis.

Recurrence-risk stratification is necessary to make evidence for adjuvant treatment to reduce disease recurrence and improve survival. Pathologic stage has been used for this purpose. Although preoperative chemoradiotherapy (PCRT) is established as a standard treatment for locally advanced rectal cancer, method for risk-stratification which is useful for post-surgical clinical practice was not settled. In addition the authors did not have overview impression for prognosis for PCRT patients. To give overview impression for prognosis of PCRT, the present study used prognosis based on pathologic stage in patient who did not receive PCRT because it is already well known in setting of clinical practice.

Risk of recurrence was well stratified based on pathologic stage in PCRT patients. In case of nodal metastasis after PCRT showed much worse prognosis than those with node metastasis without PCRT. In these cases, there was a tendency of improvement of recurrence-free survival when 2nd-line chemotherapy was given. Future investigation is required to decide on clinical suitability of pathologic stage in PCRT patients.