Core tip: Insulin resistance activates development of nonalcoholic fatty liver disease (NAFLD), however, the molecular mechanism is not fully understood. We determined fasting plasma glucose, fasting insulin, triglyceride (TG) and the levels of miRNA-103 (miR-103) in the serum of patients with NAFLD. We found that higher levels of miR-103 were expressed in the serum of patients with NAFLD. miR-103 was positively correlated with homeostasis model assessment and was used to evaluate basal insulin resistance (HOMA-IR), TG and BMI, respectively. miR-103 was an independent factor for HOMA-IR and a risk factor for NAFLD. We conclude that miR-103 is involved in insulin resistance and NAFLD.

Nonalcoholic fatty liver disease (NAFLD) is a clinical syndrome characterized by hepatic steatosis and fat deposition in hepatocytes in the absence of significant alcohol use. The incidence of NAFLD in the general Chinese population has almost doubled over the last 10-15 years and is highly prevalent in obese populations[1]. Obesity-associated insulin resistance is regarded as a factor that critically contributes to the development of NAFLD[2]. Insulin resistance resulting in a hyperinsulinemic state increases de novo lipogenesis, which further exacerbates hepatic lipid deposition and boosts the development of the disease.

miRNAs are potent intracellular post-transcriptional regulators and are also selectively secreted into the circulation in a cell-specific fashion. miRNAs are now known to be stably expressed in serum[3], blood[4,5] and plasma[6]. Moreover, the unique expression patterns of these circulating miRNAs are related to specific human diseases[7]. miRNA-103 (miR-103) regulates insulin sensitivity and glucose homeostasis and is highly expressed in the liver of patients with NAFLD. Furthermore, there is a positive correlation between the patient’s homeostatic model assessment (HOMA) index and miR-103 expression levels[8].

The clinical spectrum of NAFLD varies between steatosis with a benign clinical course and cirrhosis with serious complications, including hepatocellular carcinoma and liver failure, therefore, it is important to identify the molecular mechanisms and therapeutic targets of NAFLD. A “two-hit” mechanism has been proposed, however, the underlying molecular mechanism is not fully understood. In this study, we aimed to determine the levels of miR-103 expressed in the serum of patients with NAFLD to explore the associations between miR-103 and insulin resistance and NAFLD in order to identify new molecular therapeutic targets for these disorders.

This study enrolled a cohort of 50 patients with NAFLD who were treated at the Department of Endocrinology of the Second Affiliated Hospital of Medical College of Qingdao University, China from November 2011 to April 2013. Thirty age-matched healthy subjects were selected as controls. Blood pressure and electrocardiogram findings were normal in all patients. Patients with NAFLD were newly diagnosed and had not received any treatment. The diagnosis of NAFLD was based on the presence of an ultrasonographic pattern consistent with ‘‘bright liver’’ (brightness and posterior attenuation) with stronger echoes in the hepatic parenchyma than in the renal parenchyma, vessel blurring, and narrowing of the lumen of the hepatic veins in the absence of findings suggestive of other chronic liver disease. All cases of fatty liver were in accordance with the Chinese diagnostic criteria for NAFLD (alcohol consumption < 40 g per week and without consideration of alteration in liver enzymes). Body mass index (BMI) was calculated based on the following formula: BMI = weight/height2. The study was approved by the Ethics Committee of the Second Affiliated Hospital of Medical College of Qingdao University.

A total of 80 cases were included in this study. With the exception of age and gender (P > 0.05), BMI, HOMA-IR, Fins, TG, total cholesterol (TC), FPG, and alanine aminotransferase (ALT) in patients with NAFLD were higher than those in healthy controls (P < 0.05) (Table 1). 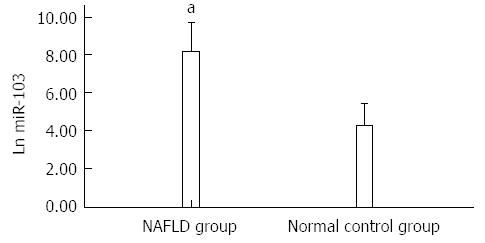 In this study, we found that HOMA-IR, Fins, TG, and FPG levels in patients with NAFLD were higher than those in healthy controls. These results suggest that these higher levels exist in patients with insulin resistance, and lipid and glucose abnormalities. To date, despite significant efforts, the accurate pathogenesis of NAFLD is not fully understood.

NAFLD, the prevalence of which is increasing in obesity, is one of the most frequent causes of chronic liver diseases and is characterized by the accumulation of lipids in hepatic cells. It is closely associated with hypertriglyceridemia, insulin resistance and intestinal microbiota changes[10,11]. More specifically, the input of lipid exceeds the output of lipid from the liver, which induces storage of lipid in the liver contributing to the development of hepatic steatosis. According to the two-hit hypothesis, insulin resistance results in increased intrahepatic triglyceride accumulation and this is the first hit, followed by the second step. The latter likely involves cytochrome P450 activation, oxidative stress, increased inflammatory cytokine production, lipid peroxidation, activation of hepatic stellate cells, and apoptosis. França et al[12] found that hypertriglyceridemia and liver steatosis were associated with increased microsomal triglyceride transfer protein expression. Another study reported that phospholipid ω-3 polyunsaturated fatty acids may play an important role in the development of NAFLD[13]. Therefore, many of the mechanisms underlying this association are still unclear.

Insulin resistance, described as the inability of insulin to stimulate glucose uptake, is a risk factor for the development of NAFLD[14]. Insulin resistance results in a reduction in lipolysis inhibition by insulin, which leads to fatty acid accumulation contributing to altered mitochondrial function, increased lipid intermediates and hepatic steatosis[15]. Insulin activates sterol regulatory element-binding protein (SREBP)1c, a master regulatory transcription factor in lipid synthesis, through stimulation of the mammalian target of rapamycin complex 1, which leads to increased lipogenesis[16]. Therefore, insulin resistance characterized by a hyperinsulinemic state as observed in patients with NAFLD increases de novo lipogenesis, which further exacerbates hepatic lipid deposition and accelerates development of the disease.

Recent studies have indicated that miRNAs are involved in the development of NAFLD, and serum levels of miRNAs are correlated with the severity of liver steatosis[17,18] and may represent novel, noninvasive biomarkers of diagnosis and histological disease severity in patients with NAFLD[19,20]. Hoekstra et al[21] reported that fatty liver development in low-density lipoprotein receptor knockout mice was associated with a significant change in the hepatocyte miRNA profile, a fivefold decrease in miR-302a expression was reported, which predisposed the liver to insulin resistance.

Increased hepatic expression of miR-103 is directly involved in the development of NAFLD. NAFLD is highly associated with obesity and insulin resistance and is accompanied by hypertriglyceridemia, histologically characterized by hepatic TG accumulation of > 5%, resulting in steatosis. Xie et al[24] reported that miR-103 accelerates adipogenesis when expressed ectopically. miR-103 was increased in the liver of patients with NAFLD[8]. Our results showed that NAFLD patients had higher levels of miR-103 expression in serum compared with normal controls, and miR-103 was positively correlated with TG. Taken together, these results indicate that high expression of miR-103 may be directly involved in the development of NAFLD by increasing adipogenesis in hepatocytes leading to ectopic lipid deposition, thus contributing to hepatic steatosis.

miR-103 links insulin resistance and NAFLD. It has been reported that BMI and TG are the main factors related to the severity of NAFLD[25] and TG is regarded as an independent parameter associated with NAFLD[26]. Our results showed that miR-103 was positively correlated with HOMA-IR, TG and BMI, respectively, and miR-103, TG and BMI were all independent factors associated with HOMA-IR. MiR-103, TG, BMI and HOMA-IR were all risk factors for NAFLD. Therefore, miR-103 may be a potential molecular link between insulin resistance and NAFLD.

In conclusion, our results indicated that high expression of miR-103 directly increases adipogenesis in hepatocytes and indirectly results in hypertriglyceridemia due to insulin resistance, thus contributing to the development of NAFLD. Therefore, miR-103 is involved in insulin resistance and NAFLD, and may be regarded as a potential molecular link between them and a therapeutic target of these disorders. However, miR-103 as the bridge between insulin resistance and NAFLD requires further evidence. As our study included a small sample size and no liver biopsies were obtained, the above results require to be confirmed in a larger study which includes liver biopsies.

The pathogenesis of nonalcoholic fatty liver disease (NAFLD) remains obscure. Insulin resistance activates the development of NAFLD, however, the molecular mechanisms involved are not fully understood. miRNAs are involved in the development of NAFLD, and are known to be stably expressed in serum, blood and plasma. Moreover, the unique expression patterns of these circulating miRNAs are correlated with specific human diseases. miRNA-103 (miR-103) regulates insulin and glucose homeostasis and is highly expressed in the liver of patients with NAFLD.

Previous studies have shown that miR-103 regulates insulin sensitivity in obese mice and is increased in the liver of patients with NAFLD. In this study, the authors determined fasting plasma glucose, fasting insulin, triglyceride (TG) and expressed miR-103 levels in the serum of patients with NAFLD. The levels of miR-103 expressed in serum were higher in patients with NAFLD than in controls. miR-103 was positively correlated with homeostasis model assessment-insulin resistance (HOMA-IR), TG and body mass index (BMI), respectively. miR-103 was an independent factor of HOMA-IR and a risk factor for NAFLD. Therefore, miR-103 is involved in insulin resistance and NAFLD and may be regarded as the link between them and a therapeutic target in both disorders.

The study results suggest that high expression of miR-103 directly increases adipogenesis in hepatocytes and indirectly results in hypertriglyceridemia due to insulin resistance, thus contributing to the development of NAFLD. miR-103 is involved in insulin resistance and NAFLD, and may be regarded as a potential molecular link between them and a therapeutic target in both disorders.

Insulin resistance is a physiological condition in which cells fail to respond to the normal actions of the hormone insulin. The body produces insulin, but the cells in the body become resistant to insulin and are unable to use it effectively, leading to hyperglycemia. Pancreatic β cells subsequently increase their production of insulin, further contributing to hyperinsulinemia, which is involved in the development of type 2 diabetes, hypertension, NAFLD and cancer. miR-103 belongs to the family of miRNAs, which are noncoding, highly conserved regulatory RNAs, which help to regulate gene expression at the post-transcription level. miR-103 is involved in the development of insulin resistance, cancer, and other diseases.