METHODS: Thirty-six Sprague-Dawley rats were randomly divided into a sham operation group, an obstructive jaundice group, and a GLP-2 group; each group consisted of 12 rats. The GLP-2 group was treated with GLP-2 after the day of surgery, whereas the other two groups were treated with the same concentration of normal saline. Alanine aminotransferase (ALT), total bilirubin, and endotoxin levels were recorded at 1, 3, 7, 10 and 14 d. Furthermore, on the 14th day, body weight, the wet weight of the small intestine, pathological changes of the small intestine and the immunoglobulin A (IgA) expressed by plasma cells located in the small intestinal lamina propria were recorded for each group.

CONCLUSION: GLP-2 reduces intestinal mucosal injuries in obstructive jaundice rats, which might be attributed to increased intestinal IgA and reduced bilirubin and endotoxin.

Core tip: It has recently been demonstrated that glucagon-like peptide-2 (GLP-2) has a highly tissue-specific trophic effect on the small intestine. However, whether GLP-2 also functions as an adapter for rats with obstructive jaundice is unknown. Studies on this topic are rare, and our research clearly illustrates that exogenous GLP-2 reduces intestinal mucosal injuries in an obstructive jaundice rat model. The next step of our study is to continue focusing on the details of this research as further studies are needed.

Glucagon-like peptide-2 (GLP-2) is a 33-amino acid peptide encoded by the carboxy terminal of GLP-1 in proglucagon. It was first reported and introduced as a specific adapter of the intestinal mucosa by Drucker et al[1] in 1996. GLP-2 is co-secreted with GLP-1, oxyntomodulin and glicentin from enteroendocrine L cells, which are primarily located in the ileum and proximal colon. It has recently been demonstrated that GLP-2 has a highly tissue-specific trophic effect on the small intestine and augments the adaptive response to intestinal resection in the rat. Additionally, GLP-2 inhibits gastric acid secretion, enhances intestinal sugar transport and slows gastric emptying[2-5]. Halaçlar et al[6] reported that bacterial translocation in samples of the liver, spleen, mesenteric lymph nodes and portal and systemic blood obtained from the GLP-2 treated group was reduced compared with samples obtained from the colitis group. In addition, the Chinese scholars Li et al[7] discovered that the rate of bacterial translocation and the level of endotoxin in rats with gut ischemia-reperfusion injury were significantly increased compared with those treated by GLP-2. Above all, the most important property of GLP-2 in the gastrointestinal (GI) tract is its enterotrophic effect[1,8-10]. Therefore, its potential therapeutic role in patients with intestinal insufficiency secondary to extensive disease or resection of the small bowel is of interest[4,9].

Male Sprague-Dawley rats, weighing 200-250 g, were housed under controlled temperature, humidity and 12-h dark/light cycles; the rats were housed in stainless-steel cages and provided free access to water and rat chow before and after the operation. The rats were randomized into three groups (n = 12 in each group). Group 1 (Control; C) underwent sham operation, whereas Group 2 [obstructive jaundice (OB)] underwent common bile duct ligation. Both of the groups were given simultaneous treatment with the same amount of normal saline after the surgeries. Group 3 [obstructive jaundice with GLP-2 (OBGLP-2)] underwent common bile duct ligation and simultaneous treatment with GLP-2 [0.2 μg/(g•d)]. Either normal saline or GLP-2 was administered by peritoneal injection daily.

Using sterile techniques, a midline incision was created. The common bile duct was identified, double ligated with 5-0 silk and divided between the two ligatures. In sham-operated animals, the common bile duct was freed from the surrounding soft tissue without ligation and transection. The operation was performed using 100 g/L chloral hydrate (3 mL/kg) for intraperitoneal anesthesia.

Serum samples were obtained and analyzed on postoperative days 1, 3, 7, 10 and 14. All serum samples were measured using a Hitachi 7600 modular chemistry analyzer (Hitachi High-Technologies Corporation, Tokyo, Japan) to determine the levels of alanine aminotransferase (ALT) and total bilirubin (Tbil) using kits from Jiancheng Bioengineering Institute. The endotoxin levels in plasma were measured according to the manufacturer’s instructions with the kits (Horseshoe Crab Reagent, Xiamen, China).

After 2 wk, the animals were anesthetized, and repeat laparotomy was performed. Segments of the small bowel, approximately 3 cm long, were harvested from the terminal ileum, embedded in Optimal Cutting Temperature (OCT) compound (Sakura Finetechnical, Tokyo, Japan) and immediately snap-frozen in liquid nitrogen for immunohistochemistry. Then, the samples were fixed in 400 g/L of paraformaldehyde solution. Sections of 5 μm were cut and stained with hematoxylin and eosin (HE). The pathological changes and injuries to the intestinal mucosa were evaluated under a light microscope by an independent observer who was blinded to the experimental protocol. Additionally, secretory immunoglobulin A (sIgA) expression in the tissue samples was assessed by immunohistochemical analysis.

Experimental data were analyzed with the SPSS 13.0 statistical program (statistical product and service solutions, © 1999 to 2003; SPSS Institute Inc., Armonk, NY, United States). The results are expressed as mean ± SD. The differences among groups were evaluated by the homogeneity test of variance analysis. The means of independent samples were analyzed and compared with the independent sample t-test. Differences were considered significant at P < 0.05.

Two to three days after bile duct ligation, the ears and tails started to exhibit jaundice, and the urine turned yellow. After 4-6 d, the jaundice was obvious, the stools were pale, and the activity of the rats decreased. Four rats (1 in group C, 1 in group OBGLP-2 and 2 in group OB) died of complications, including abdominal infection, malnutrition, liver function failure and water and electrolyte disorders. The remaining rats survived until they were sacrificed at the end of the experiments.

Unlike the sham group, the organ serosa of the jaundiced rats exhibited yellow discoloration, and the root mesenteric lymph nodes displayed beadlike enlargement. However, on the 14th day, the GLP-2 group exhibited no parietal peritoneum changes (Figure 1A). The mean body weight and wet intestinal weight were reduced in the jaundiced group compared with the sham group (Figure 1B and C); however, GLP-2 reduced the reduction in both body weight and wet intestinal weight, indicating that GLP-2 protects the intestinal mucosa from damage. 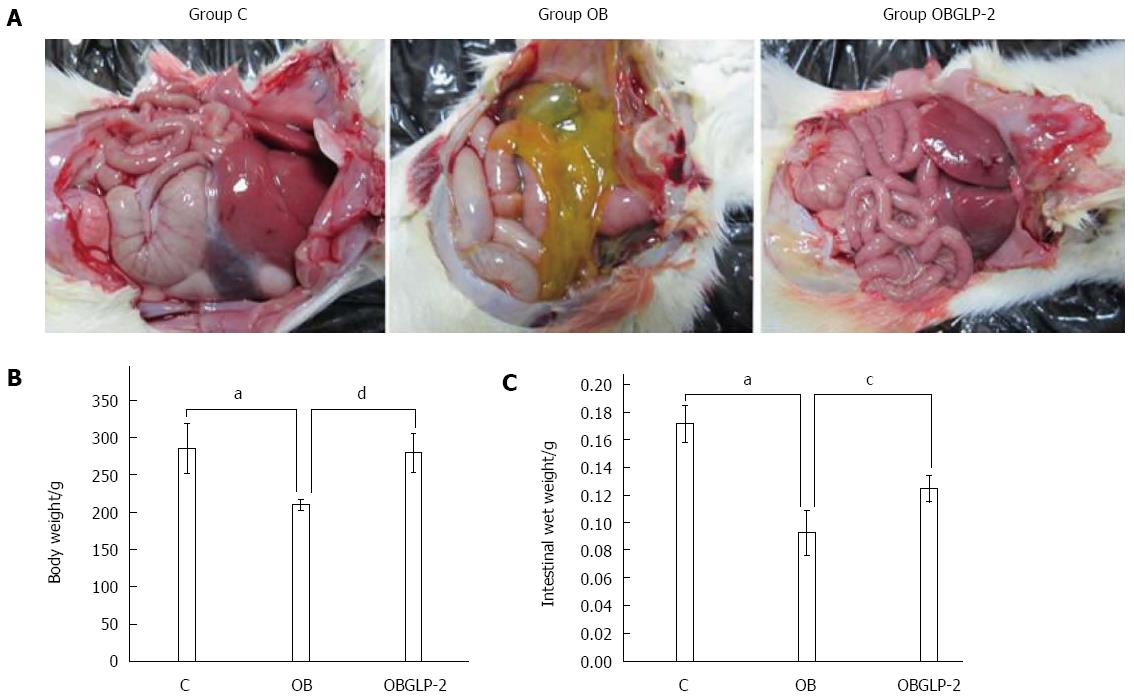 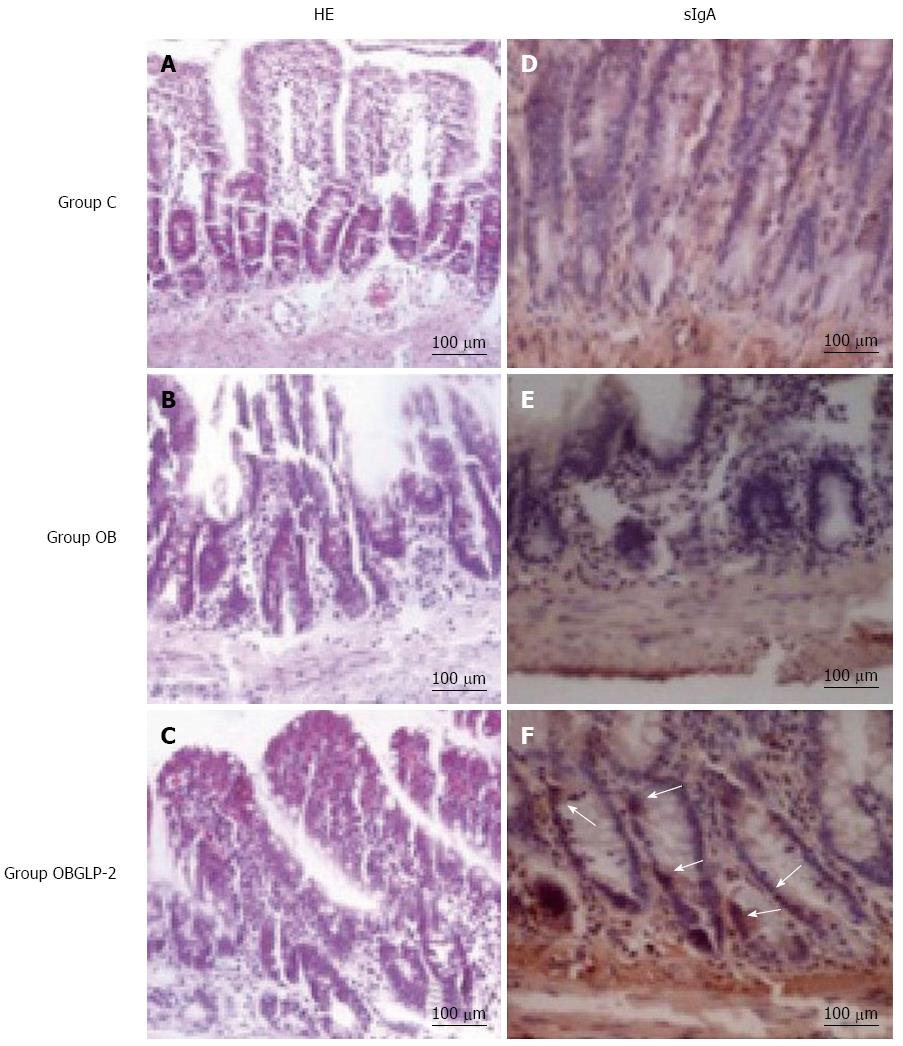 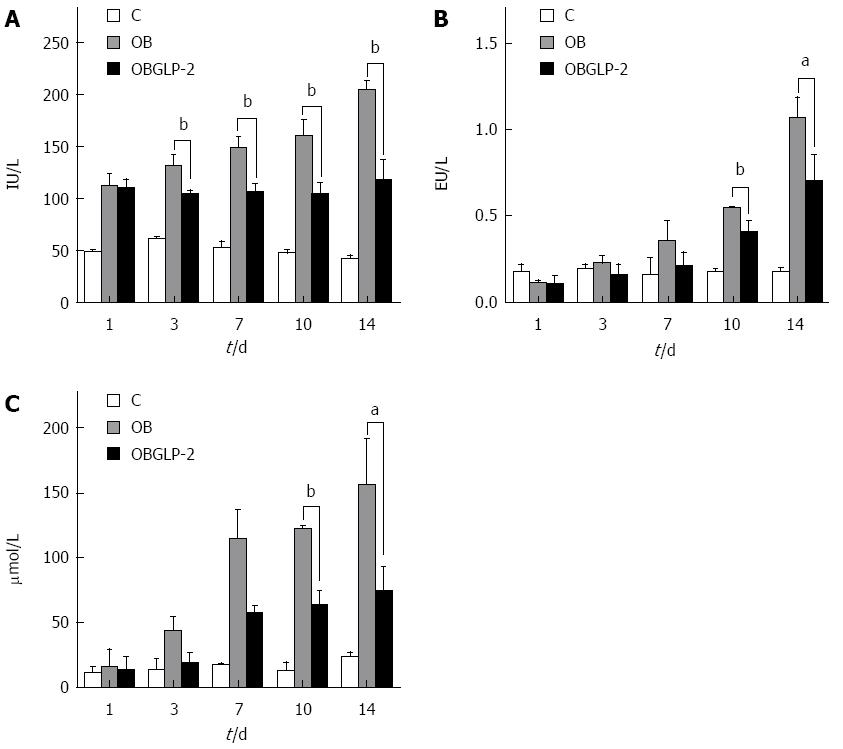 Obstructive jaundice can cause a host of complex and severe pathological and physiological changes to various organs. Intestinal mucosal barrier dysfunction and intestinal immune function decline might result in endotoxemia and intestinal bacterial translocation, which are important contributors to disease progression or death in patients[11-13]. Under normal circumstances, the large number of bacteria in the intestinal tract cannot enter the body tissue or blood circulation due to the mechanical, biological, chemical and immunological barriers of the intestine. When the intestinal mechanical barrier is damaged, endotoxins enter the blood circulation, causing endotoxemia. Then, the intestinal bacteria can migrate into the intestinal lymph nodes, blood, liver or spleen, causing bacterial translocation[14-20].

With respect to its mechanism of action on the intestinal mucosa, a large number of studies have demonstrated that GLP-2 exerts its actions via a G protein-coupled receptor (GLP-2R). The human GLP-2R gene is located on chromosome 17p13.3[28,29]. GLP-2R is a member of the G protein-coupled receptor superfamily and has 7 transmembrane domains. GLP-2R and glucagon as well as GLP-1 and the glucose-dependent insulinotropic polypeptide receptor are highly homologous. GLP-2R is widely distributed in intestinal epithelial cells, gastric epithelial cells, enteric neurons, intestinal endocrine cells[29], intestinal submucosal myofibroblasts, islet A cells, the brain and lungs[30,31]. New research findings demonstrate that GLP-2 promotes the growth of normal small bowel and the recovery of pathologic intestinal mucosa through multiple pathways. On one hand, GLP-2 promotes proliferation of the intestinal mucosa by binding to GLP-2R, which is distributed in intestinal epithelial cells. On the other hand, GLP-2 protects the intestinal function indirectly by binding to the GLP-2R, which is distributed in other regions. The effects of GLP-2 involve many cell signal transduction pathways, mainly the cAMP/PKA, PI3K/Akt and Wnt/β-catenin pathways, of which the cAMP/PKA pathway is the main one. These pathways coordinate and regulate intestinal epithelial cells, promoting steady development and intestinal adaptation. However, the mechanism(s) by which these pathways coordinate and integrate key control points and feedback inhibition are not entirely clear, and further studies are required[32-35].

Above all, GLP-2 has widely been accepted as an adapter of the intestinal mucosa. In this study, we also observed its protective function in an obstructive jaundice rat model. This effect might be attributed to increased intestinal IgA and reduced bilirubin and endotoxin. In December 2012, the United States Food and Drug Administration approved the use of Teduglutide, a GLP-2 analog, to treat adults with short bowel syndrome who need additional nutrition from intravenous feeding (parenteral nutrition). Will the drug’s application expand if more experiments clarify the protection of the intestinal mucosa in rats or humans with obstructive jaundice?

The authors would like to thank Dr. Ying Zhou and Lei Yu from Zhongshan Hospital of Fudan University for their contributions to this research as well as Dr. Ru-Chuan Shen from the University of Queensland Australia for critical review of and language revisions to the manuscript.

Obstructive jaundice can cause a host of complex and severe pathological injuries to the intestinal mucosal barrier and result in intestinal immune function decline, endotoxemia and intestinal bacterial translocation, which are important factors in disease progression or death in patients. Many recent studies have demonstrated that glucagon-like peptide-2 (GLP-2) can help protect and improve intestinal mechanical barrier function in rats. However, few direct studies on whether GLP-2 has a protective role in obstructive jaundice animal models are available.

Many researchers have discussed the mechanism by which GLP-2 acts on the intestinal mucosa and signal pathways. Many scientists are attempting to determine whether GLP-2 is related to neoplastic development. In addition, the new GLP-2 analog Teduglutide was approved by the United States Food and Drug Administration to treat adults with short bowel syndrome. Unfortunately, to date, few studies have discussed the relationship between GLP-2 and injuries caused by obstructive jaundice.

Recent reports have highlighted the function of GLP-2 as an adapter of intestinal mucosa. Almost no direct studies evaluating whether GLP-2 has a protective function on obstructive jaundice rats were identified from a PubMed search. This study is the first to report that GLP-2 efficiently prevents intestinal mucosa injury after bile duct ligation operations in a rat model. These effects might be attributed to an increase in intestinal IgA, reduced bilirubin and endotoxin and improved liver function.

Due to its specific protective function in the intestinal mucosa, GLP-2 can be widely used in patients with intestinal barrier injury despite the cause.

GLP-2 is a pleiotropic hormone that affects multiple facets of intestinal physiology, including growth, barrier function, digestion, absorption, motility and blood flow. The mechanisms through which GLP-2 produces these actions are complex, involving unique signaling mechanisms and multiple indirect mediators. However, few studies have investigated its function in rats or humans with obstructive jaundice. This study was designed to fill this gap in knowledge.

This paper demonstrates the usefulness of GLP-2 in rats with obstructive jaundice. The study is well designed, and the manuscript is interesting and clearly described.