Core tip: Post-gastrectomy anastomosis site obstruction is a relatively rare complication in patients following gastric surgery; however, it could cause serious discomfort and carries a risk of deterioration of the condition of the patient if a re-operation is required. We report successful management for post-gastrectomy anastomosis site obstruction with temporary placement of a self-expandable metallic stent.

Post-gastrectomy anastomosis site obstruction is a relatively rare complication following gastric surgery; it can cause serious discomfort and carries a risk of deterioration of the condition of the patient resulting from a re-operation. We present a case of post-gastrectomy anastomosis site obstruction after a truncal vagotomy, omental patch, gastrojejunostomy, and Braun anastomosis, and successful management with temporary placement of a self-expandable metallic stent (SEMS).

A 75-year-old man was referred to our hospital with hematemesis with epigastric pain the previous day. He had been admitted to our hospital several times for a gastric ulcer, duodenal ulcer, and gastric outlet obstruction. He had a history of smoking and daily alcohol use. On this admission, the physical examination revealed whole abdominal tenderness and rebound tenderness with rigidity. The patient presented with a fever (38.3 °C), tachycardia (100 beats/min), and an elevated white blood cell count (12100/μL). The serum glucose was 222 mg/dL (normal range: 70-110 mg/dL), and the levels of total protein, albumin, and C-reactive protein were 5.5 g/dL (normal range: 6.4-8.3 g/dL), 3.0 g/dL (normal range: 3.4-4.8 g/dL), and 242 mg/L (normal range: 0-5 mg/L), respectively; there were no remarkable abnormalities in the other biochemical tests including the renal and hepatic function tests. The abdominal CT scans demonstrated fluid collection and pneumoperitoneum around the pylorus.

The patient underwent an emergency operation (truncal vagotomy, omental patch, gastrojejunostomy, and small-size Braun anastomosis) for the duodenal ulcer perforation and gastric outlet obstruction (Figure 1). After the 5th postoperative day, he began to eat. However, after the 10th postoperative day, he complained of abdominal discomfort and vomiting without bilious. An upper gastrointestinal series (UGIS) showed decreased peristalsis and severe distension of the stomach with no visible contrast passage to the gastrojejunostomy, and an endoscopy was performed (Figure 2). The endoscopy revealed extensive food material and anastomosis site obstruction. We diagnosed anastomosis site stricture of the gastrojejunostomy from postoperative stricture or torsion of the efferent loop of the gastrojejunostomy. We inserted a SEMS (a duodenal/pyloric non-covered stent; Sewoon Medical Co., Ltd., Chungcheongnam-Do, South Korea) at the anastomosis site (Figure 3A and B). Because the patient was older and did not have good general health, a reoperation was not advisable. The stent was introduced and inserted over a guide wire. The length of the stent body was 60 mm, with a diameter of 20 mm. The stent was fully expanded after deployment (Figure 3C). The UGIS showed good passage of the contrast material from the esophagus to the jejunum and no evidence of leakage at the anastomosis site (Figure 3D). On the day following the stent insertion, the patient began to eat, and his abdominal discomfort was resolved. The patient subsequently recovered, and there were no abdominal pain episodes. At the one-year follow-up, the stent had migrated into the stomach and was removed using alligator forceps with endoscopy. The UGIS revealed that the contrast dye passed the anastomosis site well. The patient survived, without other complications (Figure 4). 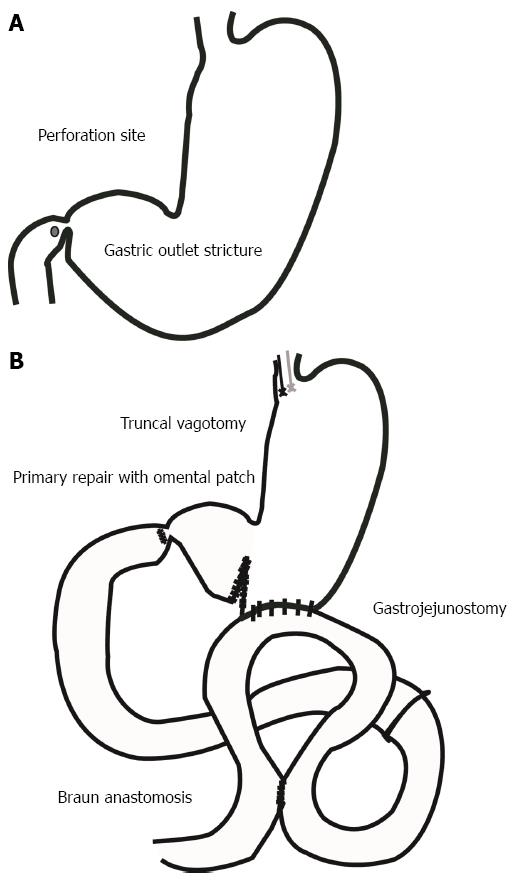 Figure 1 Schematic model of the operation. A: Before the operation; B: The primary repair and omental patch, truncal vagotomy, gastrojejunostomy, and Braun anastomosis for the duodenal ulcer perforation and gastric outlet stricture. 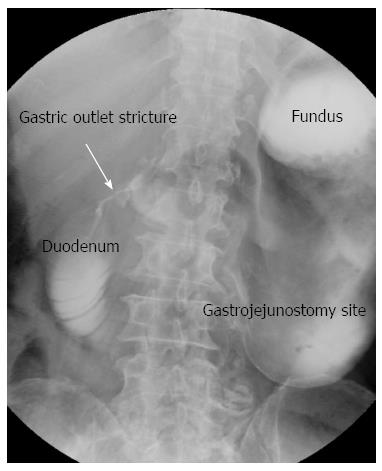 Figure 2 Upper gastrointestinal series finding on the 10th postoperative day. Decreased peristalsis and severe distension of the stomach were observed as well as stricture on the duodenal perforation site. There was no visible contrast passage to the gastrojejunostomy. 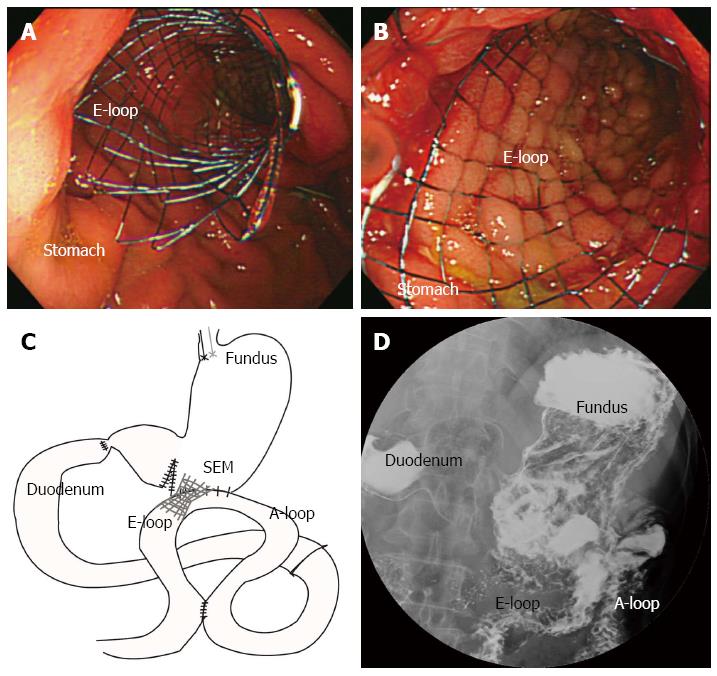 Figure 3 Endoscopic findings. A, B: A Self-expandable metallic stent was inserted at the gastrojejunostomy anastomosis site over a guide wire; C: Schematic model of the post-insertion state; D: The upper gastrointestinal series finding after the stent insertion showing good passage of the contrast material from the esophagus to the jejunum, with no evidence of leakage at the anastomosis site. A-loop: Afferent loop; E-loop: Efferent loop.

Post-gastrectomy anastomosis site obstruction is a rare complication (approximately 0.3%-1.0%)[1], and a re-operation is typically performed to resolve a gastric outlet obstruction; however, re-operations cause deterioration of the patient’s condition, and can be limited in elderly patients.

Two mechanical problems in post-gastric surgery complications are leakage and obstruction. First, anastomotic leakage is a life-threatening complication that requires prompt recognition and treatment[2]. Recent reports of successful endoscopic closure of anastomotic leakage suggest that endoscopic techniques might be a feasible alternative to surgical approaches[3]. Second, two loop syndromes of obstruction might occur after certain types of gastrectomies. Afferent or efferent loop syndrome is a purely mechanical problem caused by the obstruction of gastric emptying at or near the site of a gastrectomy[4]. Less invasive non-surgical procedures, such as insertion of gastrointestinal stents under endoscopy, percutaneous transhepatic biliary drainage, and percutaneous enterostomies have been used as a palliative option for post-gastrectomy obstruction[5,6].

In conclusion, placement of SEMS in selected patients with post-gastrectomy anastomosis site obstruction is a technically feasible and clinically effective procedure.

A 75-year-old man who underwent a truncal vagotomy, omental patch, gastrojejunostomy, and Braun anastomosis for duodenal ulcer perforation and a gastric outlet obstruction.

Anastomosis site torsion of the efferent loop of the gastrojejunostomy.

Anastomosis site stricture of the gastrojejunostomy from postoperative stricture.

An upper gastrointestinal series showed decreased peristalsis and severe distension of the stomach, with no visible contrast passage to the gastrojejunostomy, and an endoscopy revealed extensive food material and anastomosis site obstruction.

The authors inserted a self-expandable metallic stent (SEMS) at the anastomosis site.

Insertion of SEMSs has been used for palliative treatment of malignant gastric and duodenal obstructions.

Placement of SEMSs in selected patients with post-gastrectomy anastomosis site obstruction is a technically feasible and clinically effective procedure.