Antiphospholipid syndrome is a multi-system disease characterized by the formation of thromboembolic complications and/or pregnancy morbidity, and with persistently increased titers of antiphospholipid antibodies. We report the case of a 50-year-old, previously healthy man who presented with fever and new-onset, dull abdominal pain. A contrast-enhanced computed tomography scan showed segmental small bowel obstruction, for which an emergency laparotomy was performed. Histopathologic examination of resected tissues revealed multiple intestinal and mesenteric thromboses of small vessels. Laboratory tests for serum antiphospholipid (anticardiolipin IgM) and anti-β2-glycoprotein I antibodies were positive. Despite proactive implementation of anticoagulation, steroid, and antibiotic therapies, the patient’s condition rapidly deteriorated, and he died 22 d after admission. This case highlights that antiphospholipid syndrome should be suspected in patients with unexplainable ischemic bowel and intestinal necrosis presenting with insidious clinical features that may be secondary to the disease, as early diagnosis is critical to implement timely treatments in order to ameliorate the disease course.

Core tip: Antiphospholipid syndrome is a multi-organ disease characterized by the presence of thromboembolic complications and/or pregnancy morbidity, and with persistently increased titers of antiphospholipid antibodies. This case report demonstrates that antiphospholipid syndrome should be suspected for cases of unexplainable ischemic bowel and intestinal necrosis with insidious clinical features that may be secondary to the disease, as early diagnosis is critical to amelioration of the disease course.

Antiphospholipid syndrome (APS) is an autoimmune disease characterized by thrombotic microangiopathy, recurrent fetal loss, and moderate thrombocytopenia[1]. APS can affect any organ system, thus the manifestations vary greatly[2]. Hepatic manifestations, such as Budd-Chiari syndrome, small hepatic vein thrombosis, infarction (spleen, pancreas, gallbladder, intestine, etc.), ascites, esophageal perforation, and ischemic colitis, are often caused by vascular occlusion[1,3]. However, abdominal manifestations of APS are rare, representing only 1.5% of APS cases[3]. In this report, we describe an unusual case of segmental small bowel necrosis with insidious onset and atypical clinical features that may have been secondary to APS.

A 50-year-old, previously healthy man was admitted to our hospital due to fever, dull left lower quadrant pain, and vomiting that had persisted for four days. The fever had first developed three months earlier, reaching 39.0 °C, and was resolved with antibiotics. The patient worked as a driver and denied alcohol abuse and addiction to drugs, but had a 30-year history of cigarette smoking. He had no family history of autoimmune diseases.

Upon physical examination, the patient had a blood pressure of 210/62 mmHg, 124 beats/min pulse rate, a respiratory rate of 22 breaths/min, and body temperature of 38.6 °C. The abdomen was soft and mildly tender in the left lower abdomen without organomegaly or abnormal masses. Bowel sounds were hypoactive. There was no malar rash, livedo reticularis, or cardiac murmurs. Laboratory tests showed a leukocyte count of 22.1 × 109/L with 92% neutrophils, 127 g/L hemoglobin, and a platelet count of 52 × 109/L. His liver enzyme levels, creatinine, uric acid, amylase, lipase, electrolytes, coagulation tests, protein C, protein S and Venereal Disease Research Laboratory tests were within normal ranges.

Contrast-enhanced computed tomography (CT) of the abdomen revealed segmental dilated small bowel loops with wall thickening and contrast weakening, which indicated small bowel necrosis (Figure 1). No intestinal perforation or thrombosis was observed in the mesenteric arteries. The patient’s working diagnosis was thus considered as segmental small bowel obstruction and necrosis, and an emergency laparotomy was performed. The superior and inferior mesenteric and celiac arteries appeared normal and pulsatile, however, a 20 cm section of the small bowel that was 60 cm from the ligament of Treitz was entirely necrotic (Figure 2). The necrotic segment was resected, and an end-to-end anastomosis of the small bowel was performed. Histologic examination of resected tissues revealed extensive intestinal and mesenteric mucosal necrosis, congestion, and multiple small vessel thromboses (Figure 3). 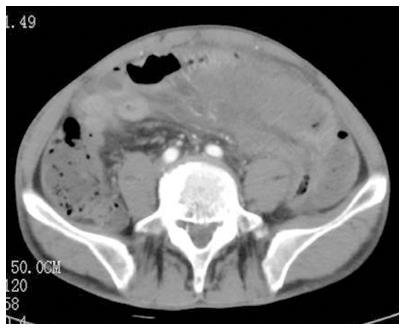 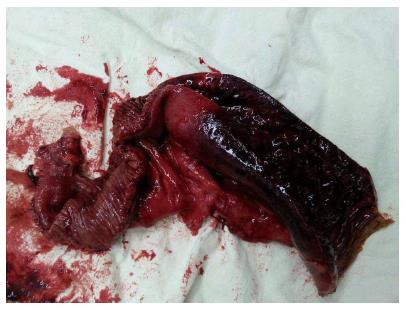 Figure 3 Pathologic findings. Hematoxylin-eosin staining showed necrosis of the mucosae, congestion, and thrombosis of small vessels in the small bowel (A) and mesentery (B).

The diagnosis for APS is based on the presence of at least one clinical and one laboratory criterion according to the Sapporo statement[4-7], and requires the presence of vascular thrombosis or fetal loss/premature birth associated with a positive lupus anticoagulant or anticardiolipin or anti-β2-glycoprotein I antibodies. For a positive diagnosis, laboratory tests must be verified after at least 12 wk. Catastrophic APS is the most severe form of the disease, for which the diagnostic criteria include multiple-organ system involvement, aggravation of manifestations within a week, small vessel occlusion in at least one organ or tissue, and presence of antiphospholipid antibodies[8]. As the patient in the case reported here did not survive past 12 wk, a definitive diagnosis of APS could not be obtained. However, the available clinical and laboratory evidence and the rapid progression of the patient’s condition indicate APS. Moreover, multiple organs were involved (small bowel, lung, and heart), indicating a fulminant form of APS. A biopsy was not obtained from the lung because of the patient’s rapid deterioration.

Bowel involvement is the second most frequently observed condition in APS with abdominal manifestation[9]. Although visceral ischemia occurs from arterial thrombosis in APS, only a few cases of intestinal ischemia have been described in detail[2,10-16]. Consequently, the incidence of ischemic bowel and infarction in APS is likely underestimated. Intestinal ischemia results from reduced flow in the superior and inferior mesenteric and celiac arteries, caused by emboli, atherosclerotic obstruction, thrombosis, or vasospasm. CT is considered a first-line investigation in APS patients with abdominal symptoms[17], which revealed no sign of thrombosis in the large vessels of our patient, but rather segmental small bowel obstruction and necrosis. An emergency laparotomy indicated that the underlying cause for the obstruction was thromboses in the small vessels of the intestine and mesentery, which is typical in cases of APS[18,19]. Moreover, other possible etiologies for thrombosis were excluded (Table 1).

Treatment of APS, which includes anticoagulants and corticosteroids, was administered to our patient at an advanced stage, and thus did not provide significant improvement. Recent expert recommendations suggest that plasma exchange should be initiated in patients with catastrophic APS who do not respond well to these treatments[20]. However, our patient’s circulatory condition precluded plasma exchange. The insidious onset of thrombosis combined with mild clinical symptoms delayed a diagnosis of APS[12,21], which may have facilitated further progression of vascular occlusion and organ involvement.

The presentation of venous or arterial intestinal thromboses can be non-specific, thus a high index of suspicion is needed for any signs of abdominal involvement in similar cases. In the case presented here, we believe that the dull abdominal pain and fever were due to bowel ischemia that was secondary to APS. Subsequently, the patient developed segmental small bowel necrosis, pulmonary infection, and hydropericardium. This case report highlights that a high level of suspicion for APS is required when patients present with unexplained abdominal pain and fever, as early diagnosis is critical to slow the course of the disease.

The abdomen was soft and mildly tender in the left lower abdomen and bowel sounds were hypoactive.

The patient was treated with anticoagulation, steroids, and antibiotics (piperacillin/tazobactam, levofloxacin, and imipenem).

Gastrointestinal manifestations are observed in only 1.5% of antiphospholipid syndrome (APS) cases.

Acinetobacter baumannii is an emerging nosocomial pathogen that is responsible for infection outbreaks worldwide.

Unexplainable ischemic bowel and intestinal necrosis with insidious clinical features may be secondary to APS, and therefore a high level of suspicion is required, as early diagnosis may ameliorate the course of the disease.

This article suggests that APS should be suspected in cases presenting with unexplained abdominal symptoms, including ischemic bowel and intestinal necrosis.