A 65-year-old male suffering from acute spinal cord injury leading to incomplete tetraplegia presented with severe recurrent Clostridium difficile (C. difficile) infection subsequent to antibiotic treatment for pneumonia. After a history of ineffective antimicrobial therapies, including metronidazole, vancomycin, fidaxomicin, rifaximin and tigecycline, leading to several relapses, the patient underwent colonoscopic fecal microbiota transplantation from his healthy son. Four days subsequent to the procedure, the patient showed a systemic inflammation response syndrome. Without detecting an infectious cause, the patient received antimicrobial treatment, including tigecycline, metronidazole, vancomycin via polyethylene glycol and an additional enema for a period of seven days, leading to a prompt recovery and no reported C. difficile infection relapse during a 12 wk follow up.

Core tip: A 65-year-old male suffering from incomplete tetraplegia presented with severe recurrent Clostridium difficile (C. difficile) infection subsequent to antibiotic treatment of pneumonia. After several antimicrobial therapies with subsequent relapses, the patient underwent colonoscopic fecal microbiota transplantation from his healthy son. Four days later, the patient showed a systemic inflammation response syndrome. Without detecting an infectious cause, the patient received antimicrobial treatment, including tigecycline, metronidazole, vancomycin via polyethylene glycol and an additional enema, for a period of seven days, leading to prompt recovery and no reported C. difficile infection relapse during a 12 wk follow up.

The recurrence rate of Clostridium difficile (C. difficile) infections (CDI) after adequate antibiotic treatment remains high and is even more frequent in patients who once relapsed[1]. Data analysis of CDI in spinal cord injured (SCI) patients is insufficient but recurrence rates seem to be equivalent to the non-SCI population[2]. A recent systematic review provides evidence that fecal microbiota transfer (FMT) seems to be a useful adjunct in the treatment of CDI relapses[3]. Out of 536 patients enrolled and treated with FMT, 467 (87%) succeeded in showing no further symptoms. However, success rates vary depending on the site of administration: 81% (stomach); 86% (duodenum and jejunum); 93% (cecum and ascending colon); and 84% for the distal colon. No severe adverse events occurred due to the procedure.

Patients with SCI present with special characteristics in the course of gastrointestinal diseases[4-6] and therefore the management and treatment is challenging[7,8]. For example, impaired colonic motility leads to decreased large bowel transport, frequently leading to constipation or megacolon[9,10]. Furthermore, high level tetraplegic patients (C4 or higher), with more frequent administration of antibiotics due to permanent or intermittent dependency on assisted ventilation following ventilator associated pneumonia, are more susceptible to colonization with multi resistant bacteria or C. difficile infections[11].

Yet, no special protocols for the treatment of CDI in tetraplegic patients have been published, so general regimens are applied. Until now, no FMT procedure in SCI patients has been described in the available literature.

A 65-year-old male was admitted to our hospital after ventral spondylodesis of C3 to C5 due to traumatic fracture. However, high level incomplete tetraplegia (American Spinal Injury Association impairment scale C) persisted so that intermittent mechanical ventilation via tracheostoma and enteral feeding via gastric tube [polyethylene glycol (PEG)] became necessary. After several weeks of intensive care treatment, transfer to a general ward was possible. The patient received antibiotic treatment (co-trimoxazole and imipenem) because of a ventilator-associated pneumonia. As a consequence of this, 10 wk post trauma, he presented with watery diarrhea. An Elisa immunoassay detected C. difficile toxin A and B and polymerase chain reaction as a nucleic acid amplification method distinguished C. difficile ribotype 027.

Several therapeutic protocols including metronidazole, vancomycin, fidaxomicin, rifaximin and tigecycline in different forms of applications and combinations were administered (Table 1). Treatment was initiated with vancomycin via PEG 250 mg 4 times a day and via clyster. Metronidazole was added via PEG 400 mg 3 times a day. No vancomycin tapering was done. Fidaxomicin was given using 200 mg via PEG two times a day for 10 d. Due to the next relapse, the patient was treated with rifaximin 400 mg three times a day via PEG for 2 wk. After the next relapse, he was treated with tigecycline intravenously for 10 d combined with vancomycin 2 g via clyster.

None of the above succeeded in resolving the symptoms. A total of six relapses occurred, four of which were confirmed by toxin testing in a stool sample. Two episodes without microbiological proof were highly probable by clinical evaluation. Two of the recurrences matched the criteria of severe CDI.

In order to prepare the patient for the FMT procedure, we omitted antibiotic treatment over a period of one week and bowel lavage and enema was performed on the 7th day. Fresh donor stool was immediately transferred to the laboratory in an airtight container. A portion of 160 g was weighed and homogenized with isotonic sodium chloride in a sterile flask. Afterwards, the homogenate was filtered repeatedly through a sterile gauze pad to remove as much particulate matter as possible[12]. The finished stool slurry was immediately transferred to the endoscopy unit and administered into the terminal ileum and colon during colonoscopy. The endoscopic findings showed severe pseudomembranous colitis with destruction of large areas of the colonic surface (see Figure 1). 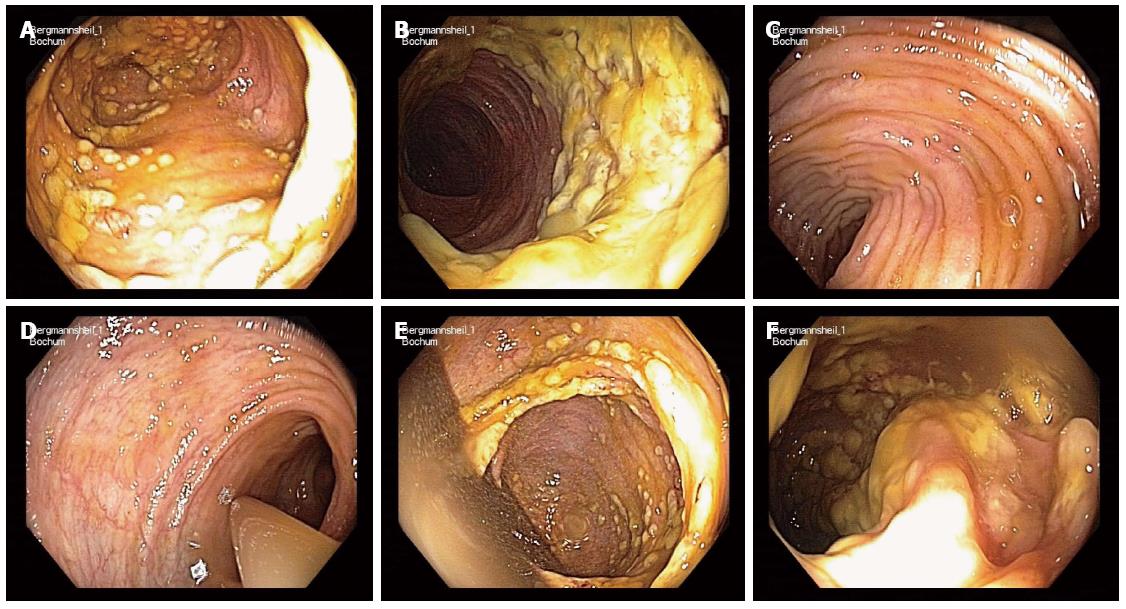 Four days subsequent to the FMT, the patient experienced fever as part of a severe systemic inflammatory response syndrome with shock. Stool consistency was pulpy but not watery as seen before. Due to respiratory failure and vasoplegia which required immediate mechanical ventilation and high-dose vasopressor therapy, the patient was transferred from the intermediate care to the intensive care unit. Extensive work-up did not reveal any infectious cause. Whole body CT scan did not show a focus despite the persistent colitis, especially no signs of pneumonia, empyema or soft tissue infection. Microbiological testing did not detect C. difficile in the stool sample and blood and urine cultures did not detect any bacteria or mycosis. There was no sign of catheter-associated blood stream infection. Echocardiographic examination did not show endocarditis.

We initiated calculated intravenous antibiotic therapy, including tigecycline and metronidazole as well as vancomycin via PEG and an enema, for a period of seven days. The respiratory and cardiovascular situation improved shortly after initiation of the treatment. In the following weeks, the patient did not receive any further antibiotic therapy. Weaning from ventilation was successful within the next weeks, enabling transfer of the patient to a specialized rehabilitation clinic. No recurrence of watery diarrhea or CDI-like symptoms occurred in the following twelve weeks subsequent to the FMT procedure.

Only very few adverse events associated with FMT have been described in the available literature so far, focussing on general population[13]. In more than 200 fecal transplantation procedures at the Academic Medical Centre of Amsterdam, The Netherlands, and more than 3000 at the Centre for Digestive Diseases in Sydney, Australia, no serious adverse event have been reported. Most patients treated with FMT experienced diarrhea on the day of the procedure and only a minority of the patients reported belching, abdominal cramping or constipation. These observations coincide with published case reports and series of FMT for CDI[14,15]; adverse events were reported for only 3 of 317 patients (upper gastrointestinal tract bleeding, peritonitis or enteritis). In another case report, nasoduodenal FMT for Crohn’s disease resulted in transient adverse effects, such as fever and abdominal tenderness in three out of four patients. However, the symptoms were temporary and ceased spontaneously in the following two days post FMT[16]. A case report by Borody et al[17], in which FMT was administered during colonoscopy, does not describe any side effects due to the procedure. Substantially, long-term follow up studies state FMT as a safe and feasible procedure without major adverse events[18].

Due to impaired bowel function, among other characteristics, patients with spinal cord injury are a challenging population. In particular, CDI in SCI-patients seems to take a more severe clinical course[19]. Furthermore, bowel preparation as the initial step of FMT is less effective[8], which may lead to deterioration of the FMT outcome.

This case emphasizes that FMT is feasible and effective in the treatment of CDI in tetraplegic patients; however, possible adverse and even severe adverse events have to be taken into consideration. In a population of ninety-nine immunosuppressed patients, severe adverse events occurred in 15% of the patients, including one procedure-associated and one non procedure-associated death[20]. Astonishingly, infection has not been the leading problem. Although our patient showed symptoms of systemic inflammation response syndrome, an infectious cause was not identified during the extensive diagnostic work-up. We hypothesize that some bacteria, possibly C. difficile, might have passed the severely destroyed mucosal layer during colonoscopy of the insufficiently prepared large bowel. The assumed transient bacteremia may be avoidable by performing FMT using a nasojejunal tube.

Although the cause remained uncertain, the treatment for septic CDI using metronidazole, vancomycin and tigecycline was initiated. With the absence of diarrhea 12 wk after the FMT procedure, the enterocolitis is considered to be in remission, emphasizing that antibiotic treatment after FMT did not lead to a relapse of CDI in the sense of the international definition[21,22].

To our knowledge, this is the first case reporting successful fecal microbiota transfer in a SCI-patient with recurrent CDI. Severe adverse events, although rarely described in literature, have to be considered subsequent to FMT, especially in patients with further impairments of bowel function. In cases of tetraplegic patients, oral administration of the stool suspension might be more feasible than through a colonoscope due to the impaired bowel cleansing prior to the procedure and therefore a higher microbial load. However, antibiotic treatment after FMT does not necessarily deteriorate the outcome of fecal microbiota transplantation.

There is an increasing interest in the literature in FMT but descriptions of complications are scarce. Furthermore, several special groups of patients have been treated with FMT but no tetraplegic patient with functional abnormalities of the gastrointestinal and colonic tract has been described so far.

The authors report the first case of FMT in a tetraplegic patient and describe a possible, procedure related serious adverse event.

This is an interesting case report of CDD treated with FMT in a patient with acute spinal cord injury who had been previously treated with antibiotics. The paper is well written and the case is interesting and potentially useful for readers.