We report a patient with small intestinal metastasis from lung squamous cell carcinoma. A 66-year-old man who underwent radical lung cancer surgery was admitted to our hospital. Before starting his fifth cycle of chemotherapy, he was found to have a positive fecal occult blood test. Abdominal computed tomography scan revealed an ileal tumor with mesenteric lymph node enlargement. He underwent laparoscopic resection of the involved small intestine and mesentery. Histopathological analysis confirmed metastasis from lung cancer. We conducted a review of the literature and 64 documented cases of small intestinal metastasis from lung cancer were found. The pathologic diagnosis, clinical presentation, site of metastasis, and survival time in these cases were reviewed.

Core tip: Gastrointestinal tract metastases from lung cancer are relatively rare. We describe a patient with melena due to small intestinal metastasis from lung squamous cell carcinoma. We collected 64 similar documented cases from 2000 to date, and reviewed the pathologic diagnosis, clinical presentation, site of metastasis, treatment, and survival time.

Lung cancer is a malignant tumor with high incidence and mortality[1]. The prognosis of lung cancer is poor as metastases are often present at the time of diagnosis. Distant metastases are usually found in the adrenal glands, bone, liver, brain, and kidney, however, metastases in the gastrointestinal tract are relatively rare[2]. In this report, we present a patient with gastrointestinal bleeding due to ileal metastasis from primary lung carcinoma.

A 66-year-old male patient who presented with shortness of breath and hemoptysis for 1 wk was admitted to our hospital on May 8, 2013. On chest computed tomography (CT), a mass was seen in the right lower lobe. He underwent a right lower lobectomy with lymph node dissection on May 10, 2013. At surgery, a 3.5 cm mass was found in the right upper lobe near the right lung hilum. In addition, hilum, carina, and mediastinum lymphadenopathy were found. The pathological study confirmed moderately differentiated squamous cell carcinoma with lymph node metastasis (1+/38) (T2N1M0). The patient received four cycles of adjuvant chemotherapy with docetaxel/nedaplatin from June 2013 to September 2013. Just before the fifth cycle of chemotherapy (January 3, 2014), the patient complained of melena. The stool examination for occult blood was strongly positive. On abdominal examination, no abnormalities were found. Colonoscopy also revealed no abnormalities. An abdominal CT scan revealed ileal wall thickening and nearby mesenteric lymph node enlargement, indicating a malignant ileal tumor (Figure 1). Tumor markers were within normal ranges, including CEA which was 2.75 ng/mL. A complete blood count showed anemia with a hemoglobin (Hb) level of 9.6 g/dL. The patient then underwent laparoscopic exploration. A 4.5 cm × 3.0 cm small intestinal tumor with serosal infiltration was found 150 cm from the cecum (Figure 2). Lymph node enlargement was seen near the mesenteric root. The involved small bowel and mesentery were resected. Histopathological analysis confirmed that the tumor was a moderately differentiated squamous cell carcinoma (Figure 3). Immunohistochemically, tumor cells were positive for CKH and P63, but negative for CK20 and CK7 (Figure 4), indicating a metastasis from primary lung carcinoma. One of the two resected mesenteric lymph nodes contained metastasis, and the surgical margins were negative. The patient had no postoperative complications and was discharged 5 days after surgery. Postoperatively, he underwent four cycles of chemotherapy with gemcitabine/nedaplatin. Brain magnetic resonance imaging and SPECT/CT during chemotherapy revealed no other metastasis. The patient is still alive with no recurrence. 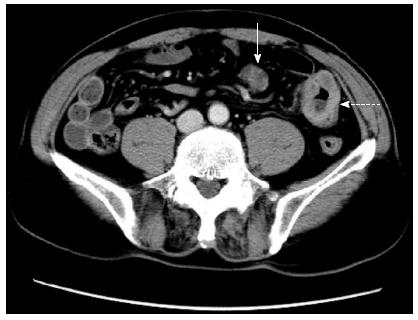 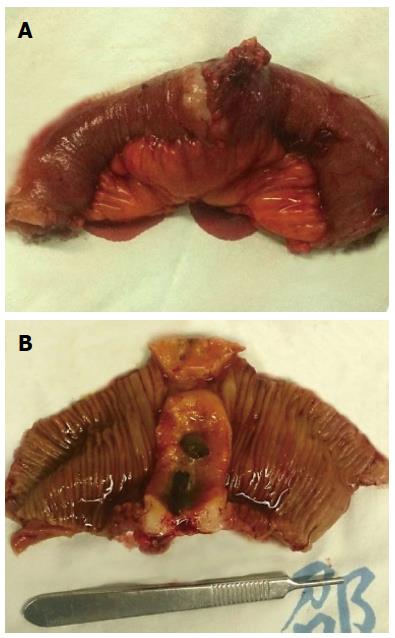 Figure 2 Intraoperative imaging of the resected tumor of the ileum. The tumor was 4.5 cm × 3.0 cm in size, with a clear margin and ulceration on the intraluminal surface. 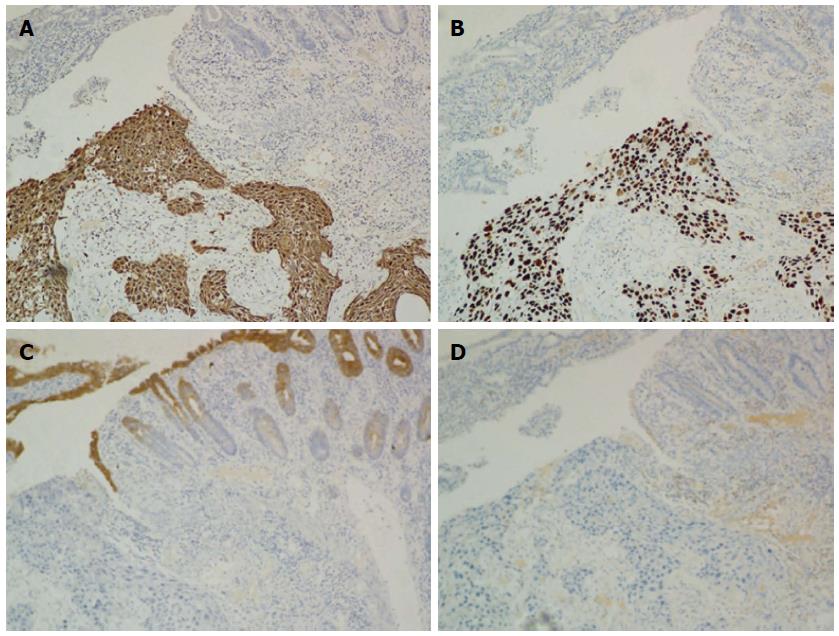 Figure 4 By immunohistochemistry, the tumor cells were found to be positive for CKH (A) and P63 (B), but negative for CK20 (C) and CK7 (D).
DISCUSSION

We searched the PubMed database for relevant English language publications from 2000 to June 2014 using the MeSH terms “Gastrointestinal Neoplasms/complications”, “Gastrointestinal Neoplasms/secondary”, and “Lung Neoplasms/pathology”. The age and sex of patients, pathologic diagnosis, clinical presentation, site of metastasis, and the survival time of the reported cases were reviewed and analyzed. In total, 64 cases were identified and reviewed[3-33], including 58 (90.6%) male and 6 (9.4%) female patients. The mean age of these patients was 61.4 years (ranging from 36 years to 88 years).

In lung cancer, metastases to the gastrointestinal tract are quite rare and mostly found in the advanced stages of the disease. Yang et al[21] reported that the incidence of symptomatic gastrointestinal metastasis from primary lung cancer was 1.77%. However, the prevalence at autopsy is much higher, ranging from 4.7% to 14%[34,35]. This can be explained by the fact that most patients with small bowel metastases have no specific symptoms. In the 64 documented cases, 59 patients had certain clinical presentations, of whom 22 (37.3%) had perforation, 19 (32.2%) had obstruction, 10 (16.9%) had hemorrhage and 8 (13.6%) had intussusception. Perforation was the most common symptom in patients with bowel metastases. The toxicity of chemotherapy is likely to be the etiology of bowel perforation[30].

In the 64 documented cases, 57 patients had metastatic sites. The jejunum was the most common site in 50.9% (29/57) of patients, followed by the ileum in 33.3% (19/57), and the duodenum in 15.8% (9/57). The general route of gastrointestinal metastasis has been suggested to be hematogenous metastasis through the spinal veins or lymphogenous metastasis from the mediastinum through the retroperitoneum and mesentery[9]. The difference in incidence between these metastatic sites may be because the jejunum and ileum have a more abundant blood supply and lymphoid tissues.

Due to the unclear clinical symptoms in patients with small bowel metastases, early diagnosis and treatment are difficult. CT plays an important role in identifying the exact cause of abdominal symptoms in patients with lung cancer[36]. The metastatic lesions were seen on CT scans as wall thickening, an intraluminal polypoid mass or an exophytic mass. PET-CT may be more accurate than CT or other conventional imaging methods for the diagnosis of metastatic malignant sites. However, due to the high cost and the lack of clinical cases, the role of PET-CT in the diagnosis of lung cancer gastrointestinal metastasis is still controversial. Capsule endoscopy has the capability of providing visual images of the bowel and is superior in many aspects of gastrointestinal disease evaluation and management. It can provide help in identifying the presence of small intestinal metastasis when a patient with lung cancer presents with suspected small intestinal bleeding. However, it may have a limited role in patients with bowel perforation and obstruction.

As most lung cancer patients with gastrointestinal metastasis exhibit bowel perforation or an acute abdomen, surgical intervention is required. Dabaja et al[37] showed that the 5-year overall survival rate was signiﬁcantly higher for patients who underwent surgery compared with patients who did not. Laparoscopic surgery not only has the advantages of less trauma, less blood loss and quicker recovery, but also has huge potential in diagnosis. Postoperative chemotherapy and individualized treatment may improve the survival rate for these lung cancer patients. For the lung cancer patient with distant metastasis, the guideline indicates that cisplatin/pemetrexed is recommended for patients with non-squamous non-small cell lung cancer; for patients with squamous cell carcinoma, cisplatin/gemcitabine is an option[38]. The chemotherapy regimen should be changed when there are other metastases present.

A 66-year-old man with a history of radical lung cancer surgery presented with melena.

Tumor markers were within normal ranges, including CEA which was 2.75 ng/mL. A complete blood count showed anemia with an Hb level of 9.6 g/dL.

The patient underwent resection of the involved small bowel and mesentery. Postoperatively, he received four cycles of chemotherapy with gemcitabine/nedaplatin.

Gastrointestinal tract metastases from lung cancer are relatively rare, and the clinical symptoms are unclear. The general route of gastrointestinal metastasis and the prognosis are also unclear.

When abdominal symptoms are present or persistent positive occult blood tests are found in patient with lung cancer, bowel metastases should be considered