We report a 51-year-old female patient with a solitary lymphangioma located in the upper splenic pole which was managed successfully with laparoscopic partial splenectomy. Surgery lasted 170 min and did not require blood transfusions. The patient recovered well post-operatively and was asymptomatic at the 3-mo follow-up. She had a normal platelet count and no recurrence on ultrasonography or computed tomography. Laparoscopic partial splenectomy is a safe, minimally invasive technique for the treatment of solitary splenic lymphangiomas in the splenic pole. We performed the procedure using the HabibTM 4X device. This laparoscopic bipolar radiofrequency device ensured a “bloodless” splenic parenchymal resection.

Primary splenic tumors are relatively uncommon, but are occasionally found during routine physical examinations or elective abdominal imaging studies, with no symptoms[1]. Splenic lymphangiomas are rare, benign, primary splenic tumors resulting from congenital malformations of the lymphatic system, which are mainly found in children, but occasionally in adults[2]. Laparoscopic total splenectomy was traditionally recommended for the treatment of splenic neoplasms. However, with the better understanding of the importance of the splenic immune functions in both children and adults, changes have taken place regarding the surgical management and approach to splenic lesions. Laparoscopic partial splenectomy is minimally invasive and has become an elective procedure for preserving the splenic immune functions[3]. But the procedure is technically difficult. We herein report a rare case of a solitary splenic lymphangioma located at the upper pole of the spleen which was successfully managed by laparoscopic partial splenectomy using a HabibTM 4X laparoscopic bipolar radiofrequency device.

A 51-year-old female patient presented with a 2-year history of left upper abdominal discomfort. She was admitted to the Department of General Surgery at The First People’s Hospital of Shunde in December 12, 2013. The patient had previously undergone a hysterectomy via laparotomy because of hysteromyoma. She had no history of trauma, no weight loss, and no family history of cancer. Physical examination yielded no remarkable findings. Laboratory tests were normal. Gastroscopy revealed chronic superficial gastritis and enteroscopy detected no abnormalities. Ultrasonography showed a mildly hyperechoic splenic mass with no blood flow on Doppler images and with a clear boundary. A hemangioma was diagnosed based on the ultrasonographic findings. A computed tomography (CT) scan revealed the size of spleen to be approximately 8.9 cm × 7.9 cm × 3.5 cm and confirmed a hypo-dense ellipse mass, measuring 1.5 cm × 1.0 cm, occupying the upper pole of the spleen (Figure 1). The mass was differentiated from an angioma and a metastatic tumor. Magnetic resonance imaging (MRI) showed a single, well-defined, heterogeneous ellipse with high T2 and low T1 signals in the spleen with no centripetal fill-in of contrast on delayed images. MRI findings were suggestive of a splenic cyst. 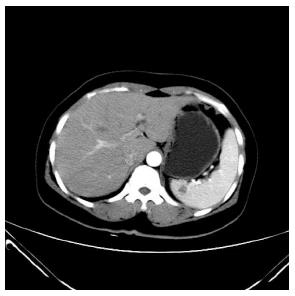 Under general anesthesia, the patient underwent a four-trocar laparoscopic upper pole splenectomy in a semi-lateral position. A 10-mm port was placed sub-umbilically for a 30-degree telescope. Two 12-mm trocars were placed at the middle point of the line between the appendix ensiformis and the umbilicus, and parallel to the umbilicus in the left anterior axillary line, respectively. A 5-mm port was placed parallel to the umbilicus in the left mid-clavicular line. The surgeon stood at the right of the patient. The first assistant, who handled the laparoscope, stood to the right of the surgeon.

The procedure began with a thorough search of the abdominal cavity. The left side of the gastrocolic ligament and the splenogastric ligament including the short gastric vessel were divided to expose the splenic vascular pedicle. The branches of the splenic artery and vein that supply the upper half of the spleen were separated and divided after ligation with a hem-o-lok vascular clip, resulting in an ischemic demarcation line (Figure 2). Laparoscopic ultrasound was used to identify the tumor location. A bipolar radiofrequency device, the HabibTM 4X (Generator 1500X, RITA Medical Systems, Inc., California, United States), was inserted into the parenchyma of the spleen along the well-defined demarcation line for coagulating and closing blood vessels (Figure 3). The radiofrequency power was set at 80 W. The coagulated spleen tissue was divided bloodlessly using an Ultracision Harmonic Scalpel (Ethicon Endo-Surgery Inc., Cincinnati, United States) (Figure 4). Thick ducts were clamped with the hem-o-lok vascular clip and cut off for safety. After the splenophrenic ligaments were divided, the whole upper pole of the spleen containing the tumor, was separated completely. After surgery, the specimen was placed in a bag first and then removed from an enlarged sub-umbilical port. 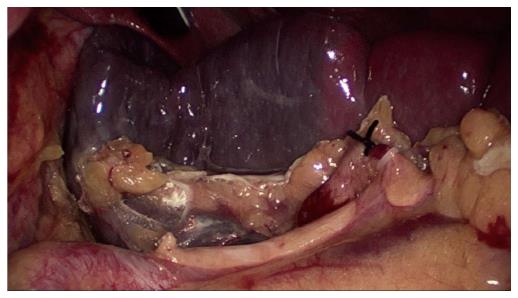 Figure 2 After ligating the upper branches of the splenic artery, an ischemic demarcation line on the splenic surface is pronounced. 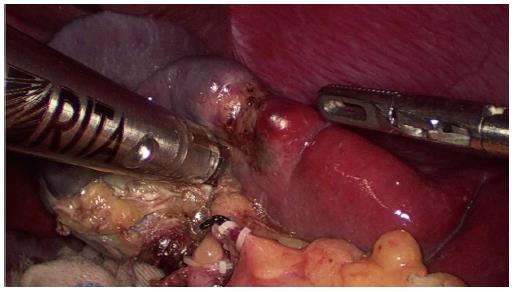 Figure 3 HabibTM 4X was inserted into the splenic parenchyma along the well-defined ischemic demarcation line for coagulating and sealing blood vessels. 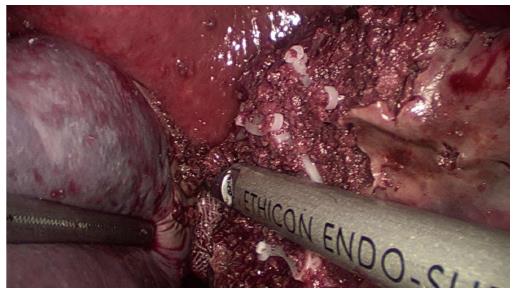 The duration of the operation was 170 min, and the estimated blood loss was minimal (approximately 30 mL). The patient was discharged on day 7 post-operatively with no complications. Histological diagnosis was splenic lymphangioma (Figure 5). At the 3-mo follow-up visit, CT scan showed that the remnant lower pole of the spleen was normal (the size of spleen was approximately 6.1 cm × 4.1 cm × 3.1 cm). The patient was asymptomatic with no recurrence and had a normal platelet count. 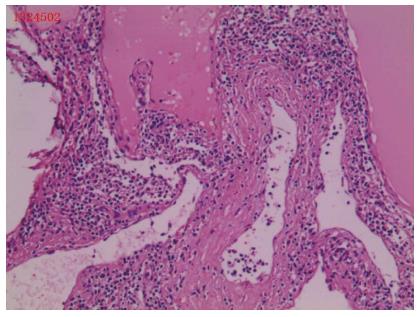 Splenic lymphangioma presents as a cystic, solid, or honeycomb mass that is either solitary or multifocal. The main clinical symptoms are typically associated with large cysts and include vague abdominal pain and symptoms due to compression of adjacent organs. Cystic lymphangioma is the most common type and is characterized by a honeycomb of large and small thin-walled cysts containing lymph-like clear ﬂuid. Solid lymphangiomas have also been described with sclerotic changes and papillary endothelial proliferation[4]. Solitary splenic lymphangioma is extremely rare and appears as a cystic lesion. Imaging characteristics are hypo- or anechoic lesions detected by ultrasound, low attenuation and non-enhancing masses detected by CT, and high T2 and low T1 signal intensity on MRI[5]. Different imaging characteristics of splenic lymphangiomas, such as a solid-cystic mass, mildly increased echogenicity on ultrasound, and fill-in contrast enhancement on delayed CT images and MRI, are also described in some cases[6-8]. Nevertheless, a solitary splenic lymphangioma is difficult to differentiate from a splenic cyst/angioma or a metastatic tumor. In this report, the imaging characteristics were not compatible with the commonly published form of lymphangioma, making it difficult to diagnose preoperatively.

Currently, laparoscopic splenectomy, which leads to a good short-term outcome and is minimally invasive, is still the most widely accepted standard surgical treatment for splenic disorders. However, with the better understanding of the important role of the spleen in immune defense, changes have taken place in the surgical strategy for splenic surgery. Several studies have indicated that total splenectomy could increase the risks of postoperative infection, secondary atherosclerosis events, pulmonary hypertension, and thrombocytic events[9,10]. Therefore, splenectomy should be avoided if possible. Partial splenectomy can preserve the immune function of the spleen if at least 25% of the normal splenic tissue by weight is preserved[11,12]. Since Uranüs et al[13] reported the first case of laparoscopic partial splenectomy in 1995, showing the benefits of a splenic parenchyma-preserving procedure with minimally invasive surgery, it has become an elective procedure for focal splenic disorders[3,14]. Uranues et al[14] reported 38 patients who underwent laparoscopic partial splenectomy with a median operating time of 110 min and with no post-operative mortality. However, laparoscopic partial splenectomy still remains a challenging procedure as bleeding from the cut edge of the spleen is difficult to control and can result in death.

In this report, the perioperative bleeding risk was limited, and there were no complications. We found that laparoscopic partial splenectomy is safe for treatment of splenic lymphangiomas located in the pole of the spleen. To succeed in this technique, the surgeon should be skilled at the procedure. The spleen has a segmental blood supply, and tearing the splenic peplos or splenic hilum often results in uncontrolled bleeding. The surgeon must therefore move the spleen gently when dividing the splenic ligaments. Targeted segmental devascularization of the spleen plays a key role in partial splenectomy. The splenic artery is divided into two or three groups of branches that provide blood supply to the upper and lower poles and an intermediate segment. In some patients, the number of segments ranges from three to seven[15]. The surgeon should isolate and ligate the segmental vessel and make a clear ischemic demarcation line, as shown in our case, to significantly reduce bleeding from the splenic parenchymal section. An advanced laparoscopic instrument ensures a safe transsection of the splenic parenchyma. Currently, important technical advances for a safe laparoscopic partial splenectomy have been made using argon beams, ultrasound scalpels and ligature devices, staplers, or radiofrequency ablative devices[16,17]. In our case, we used a new bipolar radiofrequency device, the HabibTM 4X, which offers an ideal “bloodless” parenchymal resection in the liver[18], resulting in coagulation necrosis of the splenic tissue and sealing of blood vessels prior to transsection. To the best of our knowledge, there are no published data about using this device for a laparoscopic partial splenectomy.

A 51-year-old female with a history of hysterectomy via laparotomy presented with left upper abdominal discomfort.

A benign lesion located at the upper pole of the spleen.

Ultrasonography revealed a mildly hyperechoic splenic mass with no blood flow and with a clear boundary. Computed tomography confirmed a hypo-dense ellipse mass (1.5 cm × 1.0 cm) occupying the upper pole of the spleen. Magnetic resonance imaging showed a single, well-defined, heterogeneous ellipse with high T2 and low T1 signals in the spleen with no centripetal fill-in of contrast on delayed images.

HabibTM 4X, a bipolar radiofrequency device causing coagulation necrosis of the liver tissue and sealing of blood vessels and bile duct, offers an ideal “bloodless” parenchymal resection in the liver.

This case report represents not only a rare case of a solitary splenic lymphangioma, but also shares the skills of laparoscopic partial splenectomy using HabibTM 4X, which ensured a “bloodless” splenic parenchymal resection.

This article presents the recent progress in laparoscopic partial splenectomy.