CONCLUSION: Hepatectomy is better than RFA for the treatment of CRLM. However, RFA might be suitable for selected patients with single, small (≤ 2 cm) CRLM.

Core tip: Previous studies reported that hepatectomy is better than radiofrequency ablation (RFA) to improve survival outcomes in the patients with colorectal liver metastasis (CRLM). However, there is still controversy that RFA is beneficial in selected patients. In this study, hepatectomy was better than RFA for the treatment of CRLM. However, RFA might be suitable for selected patients with single, small CRLM (≤ 2 cm).

Hepatectomy is the standard treatment for colorectal liver metastasis (CRLM). Estimated 5-year overall survival (OS) rates are between 27% and 58%[1]. However, hepatectomy is difficult to perform and has a high complication rate. To reduce morbidity, radiofrequency ablation (RFA) has been used for decades to treat patients with CRLM[2,3].

Numerous studies have reported that RFA is a safe and feasible treatment option for a limited population of patients with CRLM[4]. RFA has a low risk of complications and is an effective treatment[3,5-8]. Recent studies, however, demonstrated that hepatectomy is superior to RFA and that RFA should be used only in patients unsuitable for hepatectomy[9-11]. However, outcomes after RFA to treat CRLM have rarely been evaluated according to location, number, and synchronicity of metastases even though these are important considerations in a treatment plan. Moreover, a recent study reported that survival was comparable for CRLM patients who underwent RFA or hepatectomy, despite the high local recurrence rate observed after RFA[2].

We reviewed 1189 colorectal cancer patients with liver metastasis between January 2000 and December 2009. We identified 408 patients who underwent curative intent hepatectomy or intraoperative RFA to treat CRLM. Exclusion criteria were CRLM size > 3 cm, number ≥ 5, percutaneous RFA, follow-up period < 12 mo, double primary cancer, hereditary nonpolyposis colorectal cancer (HNPCC), or treatment by both RFA and hepatectomy. Based on these criteria, 174 patients were excluded: 100 for CRLM size > 3 cm, 6 for CRLM number ≥ 5, 4 for percutaneous RFA, 11 for follow-up < 12 mo, 11 for double primary cancer, 3 for HNPCC, and 39 for both RFA and hepatectomy.

We calculated propensity scores using a multivariable logistic model considering the variables sex; age; preoperative carcinoembryonic antigen (CEA) level; location of the primary colon cancer; number, location and maximal size of CRLM; tumor node metastasis (TNM) stage; lymphatic invasion; vascular invasion; neoadjuvant chemotherapy; adjuvant chemotherapy; and cell differentiation. Using the logit of the estimated propensity score, one case from the RFA group was matched to two cases from the hepatectomy group using a caliper of 0.2. Covariate balance and surgical outcomes between the matched groups were evaluated after matching. We could not take indocyanine green (ICG) clearance test for calculating propensity score because we did not performed ICG retention test in every patients with colorectal liver metastasis. We routinely checked ICG retention rate in selected patients with chronic liver disease. 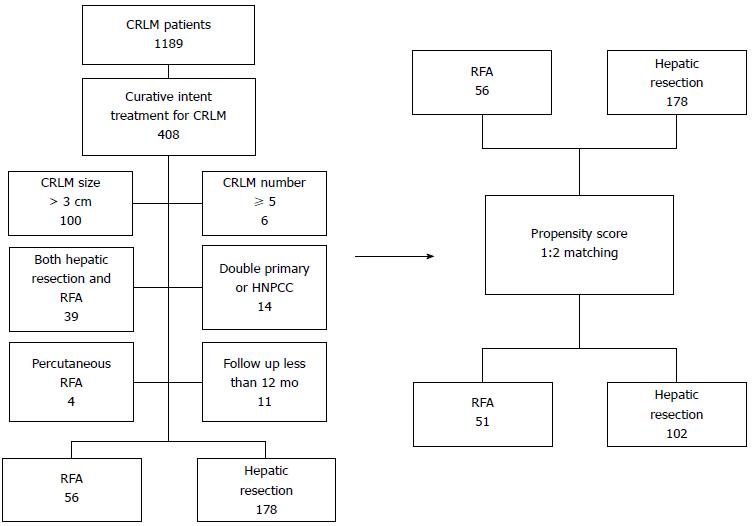 We investigated extrahepatic metastases preoperatively using computed tomography (CT) and positron emission tomography images. All patients underwent prior surgical excision of a primary colorectal cancer. In the RFA group, an interventional radiologist performed RFA using open surgical or laparoscopic approaches with a 460 KHz generator expendable needle radiofrequency system (model 500 or 1500; RITA Medical Systems, Mountain View, CA; Cool Tip, Radionics Corporation, Burlington, MA). For lesions at the liver surface or adjacent to the intestine, patients were treated by laparoscopic or intraoperative RFA. For all patients who underwent RFA, complete necrosis of liver metastases was confirmed by intraoperative ultrasonography and CT or magnetic resonance imaging within 1 week of the procedure.

To prevent recurrence, we recommended adjuvant chemotherapy based on fluorouracil (5-FU) for all patients. Postoperative surveillance for recurrence was performed every 3 to 6 mo for the first 3 years and annually thereafter; this included physical examination, chest X-ray, and abdominal CT scanning. Local recurrence was defined as recurrence at the RFA-ablated area or resection margin of the hepatectomy. In addition to medical records, Roentgen images were reviewed retrospectively to identify recurrence patterns. Endpoints were time to tumor recurrence and time to death.

Postoperative complications (CD score ≥ 2) developed in 28 patients (27%) after hepatectomy and 5 (10%) after RFA (P = 0.012). However, no significant differences were noted in complication rates for treatment of CRLM. Perihepatic fluid collection or hepatic abscess were seen in 5 patients (5%) in the hepatic resection group and 2 (4%) in the RFA group (P = 0.99) with no postoperative mortality. 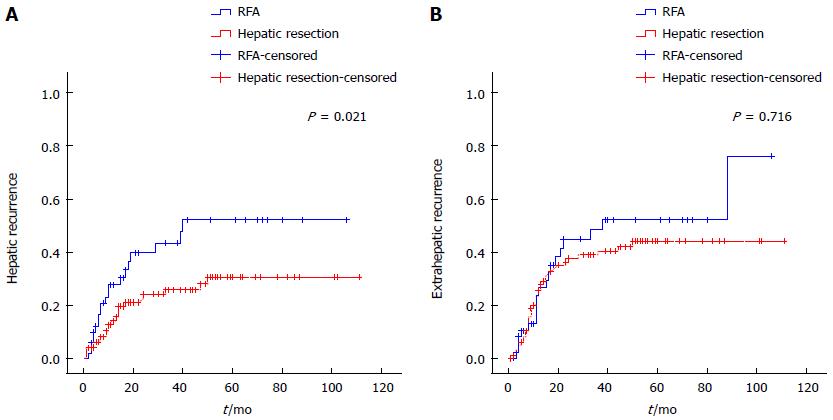 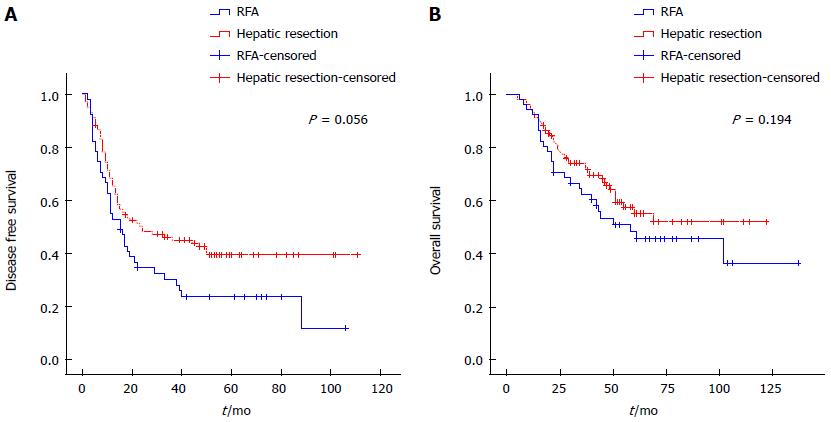 We performed subgroup analysis according to CRLM number, size, and location. Survival curves were similar between the two groups for single or small (≤ 2 cm) CRLM (P = 0.714 and P = 0.740). However, the trend was that survival curves for the hepatectomy group were better than for the RFA group for multiple, large (> 2 cm) CRLM (P = 0.034) (Figure 4). No significant differences were seen by tumor distribution. 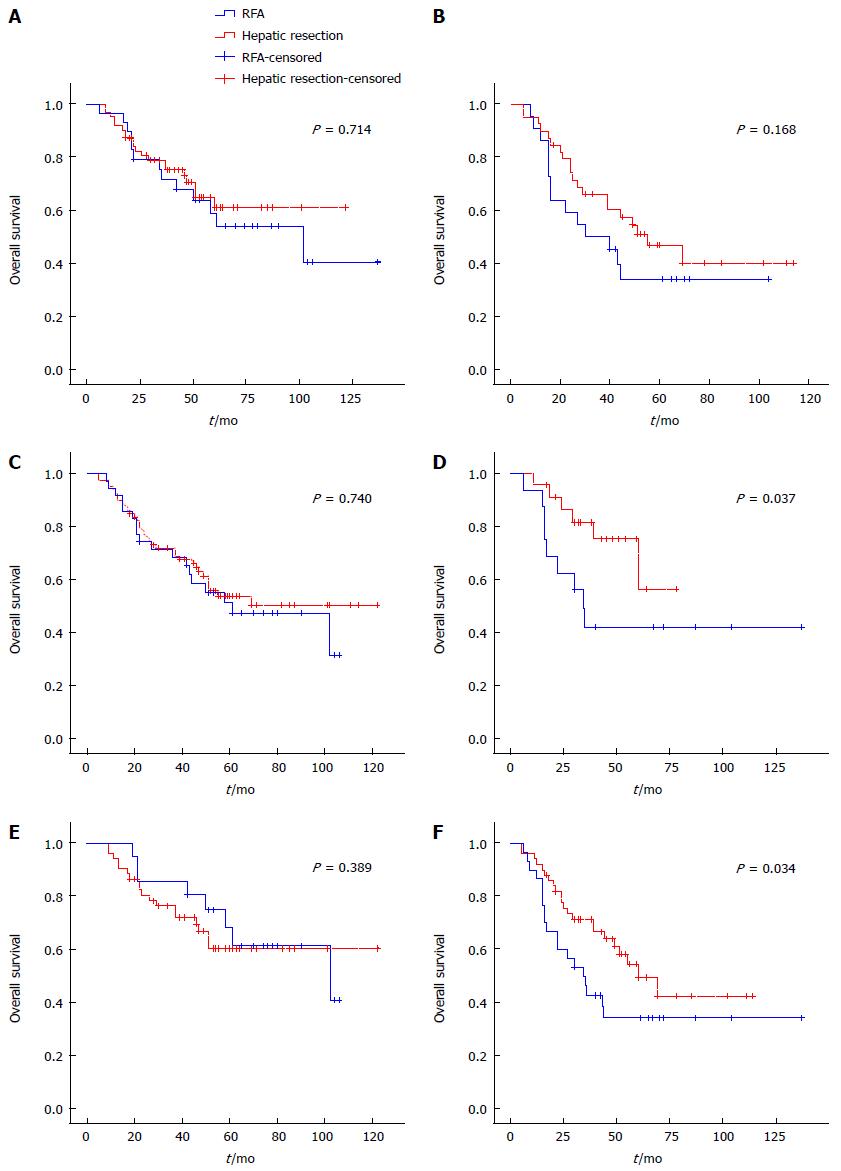 Survival of colorectal cancer patients has improved over the last decades, largely due to newly developed surgical techniques and chemotherapeutic agents. In addition, techniques such as RFA have also been developed. We found that, by Cox regression multivariate analysis, RFA for CRLM was associated with a high recurrence rate. The hepatic recurrence rate was significantly higher after RFA than after hepatectomy by recurrence pattern analysis. However, oncologic outcomes were similar after RFA and hepatectomy for single or small (≤ 2 cm) CRLM.

We found significant differences in complication rates between the hepatectomy and RFA groups although the overall complication rate was low in both RFA and hepatectomy groups. Other studies also reported that RFA is less invasive than hepatectomy[5-8]. However, RFA should be considered as only an alternative treatment for patients not indicated for hepatectomy[2,9-11,17-21].

Hepatectomy is not always possible, however. A sufficient volume of remnant liver must be present before hepatectomy to reduce surgical risk. Portal blood pressure and biliary drainage are also important factors. If the estimated volume of the remnant liver is too small, portal vein embolization is useful to decrease surgical risk[22].

In our study, survival outcomes were similar in the RFA and hepatectomy groups, in particular for patients with single or small CRLM. However, the location of CRLM was not a significant factor for survival outcomes. Therefore, RFA might be substitute treatment for selected patients with single, small CRLM. The optimum diameter of CRLM for RFA has been controversial. Some studies suggest that RFA is acceptable if the CRLM are less than 3 cm in diameter[18,20,23,24]. However, other studies showed that RFA is associated with higher local recurrence rates, even for CRLMs less than 3 cm[19,25,26]. In this study, survival curves for the hepatic resection group were higher than for the RFA group for tumor size > 2 cm, although the difference was not significant.

A study reported that OS of an RFA group was comparable to OS for a hepatectomy group despite a high rate of local recurrence after RFA. This finding might be due to similar rates of extrahepatic recurrence, a crucial survival factor[2]. In our study, we verified RFA using a variety of criteria. RFA was associated not only with high local recurrence, but also poor OS. Cluster of differentiation 95 (CD95) is thought to affect the recurrence of cancer after RFA because of the potential of RFA to cause hypoxic damage. CD95 can induce apoptosis, but can also promote tumorigenesis in apoptosis-resistant tumor cells[27].

To overcome the shortcomings of RFA, microwave ablation was developed to treat hepatic neoplasms[29-32]. Recent studies reported that microwave ablation is safe and has a low complication rate, even for tumors located near major vessels. Patients who underwent microwave ablation showed enhanced survival relative to a conventional hepatectomy group based on short-term follow-up results[32,33]. However, few published studies have examined a large number of patients followed for a long period of time.

This study has several limitations that should be considered. The major drawback was that it was neither randomized nor prospective. However, conducting randomization for RFA is difficult so we reduced bias using propensity score matching. Although we could not evaluate ICG clearance test and comorbidity rate to calculate propensity score, it does not seem an essential component to evaluate oncologic outcomes. Moreover, the comorbidity rate was not significantly different between the two groups.

In conclusion, our long-term follow-up survival analysis revealed that hepatectomy was superior to RFA for treating CRLM. RFA was associated with hepatic recurrence and was a poor prognostic factor. However, RFA might be an option for selected patients with single, small (≤ 2 cm) CRLM.

Numerous studies have reported that radiofrequency ablation (RFA) is a safe and feasible treatment option for a limited population of patients with colorectal liver metastasis (CRLM). Recent studies, however, demonstrated that hepatectomy is superior to RFA and that RFA should be used only in patients unsuitable for hepatectomy. However, outcomes after RFA to treat CRLM have rarely been evaluated according to location, number, and synchronicity of metastases even though these are important considerations in a treatment plan. Moreover, randomized controlled trial is difficult to do to compare the outcomes after hepatectomy and RFA.

A randomized controlled trial to compare the outcomes of radiofrequency ablation (RFA) and hepatectomy would be difficult. Instead, propensity score matching analysis has been used to minimize bias in evaluating the effectiveness of RFA in patients with hepatocellular carcinoma. However, no propensity score analysis for patients with CRLM has been published.

The long-term follow-up survival analysis revealed that hepatectomy was superior to RFA for treating CRLM. RFA was associated with hepatic recurrence and was a poor prognostic factor. However, RFA might be an option for selected patients with single, small (≤ 2 cm) CRLM.

This is a good descriptive study and the methodology was so good. The particular point of this article is “propensity score analysis”. The authors used this method to match patients between these two groups and tried to overcome bias resulting from retrospective study.