There are 33 human tetraspanin proteins, emerging as key players in malignancy, the immune system, fertilization, cellular signaling, adhesion, morphology, motility, proliferation, and tumor invasion. CD9, a member of the tetraspanin family, associates with and influences a variety of cell-surface molecules. Through these interactions, CD9 modifies multiple cellular events, including adhesion, migration, proliferation, and survival. CD9 is therefore considered to play a role in several stages during cancer development. Reduced CD9 expression is generally related to venous vessel invasion and metastasis as well as poor prognosis. We found that treatment of mice bearing human gastric cancer cells with anti-CD9 antibody successfully inhibited tumor progression via antiproliferative, proapoptotic, and antiangiogenic effects, strongly indicating that CD9 is a possible therapeutic target in patients with gastric cancer. Here, we describe the possibility of CD9 manipulation as a novel therapeutic strategy in gastric cancer, which still shows poor prognosis.

Core tip: Tetraspanin CD9 is a cell-surface protein with four transmembrane domains and is found in several organs. Although CD9 was primarily identified as a tumor suppressor, it exhibits diverse functions through its association with various partner proteins. CD9 relates to tumor proliferation, apoptosis, migration, adhesion, and angiogenesis, therefore involving several steps of tumor formation: communication with the environment, dissemination, and metastasis. In this review, we describe the possibility of CD9 manipulation as a novel therapeutic strategy to improve clinical outcome in gastric cancer.

Gastric cancer is one of the most common malignancies, remaining a major public health issue as the fourth most common cancer and the second leading cause of cancer death worldwide[1], with a particularly high incidence in Japan, China, South Korea, Chile and Costa Rica. The large regional incidence variations possibly reflect different prevalences of Helicobacter pylori infection, which is responsible for > 60% of gastric cancer globally. Advanced gastric cancer is an aggressive disease, and the prognosis remains poor. The 5-year survival rate for locoregional disease is 25%-35%[2-4] and the median survival ranges from 10 to 14 mo in advanced disease[5,6]. Although various treatment modalities have been developed and the mortality rate of gastric cancer has gradually decreased over recent decades[7], many of them have failed to eliminate gastric cancer cells curatively[8]. Therefore, a novel therapeutic strategy is clinically desired.

CD9, a member of the tetraspanin family, has been reported to relate to growth and invasion of tumor cells. There are many reports of the relationship between CD9 expression and disease prognosis. In addition, molecular mechanisms of CD9 functions have been gradually clarified. In this field, we also reported apoptotic signals after CD9 ligation in gastric cancer cells, as well as the treatment of gastric-cancer-bearing mice with anti-CD9 antibody.

We review the characteristics of CD9 and discuss the possibility of CD9 as a novel therapeutic target in gastric cancer.

Tetraspanins, which have four putative membrane-spanning domains, are integral membrane proteins including at least 33 distinct family members, such as CD9,CD37, CD53, CD63, CD81, CD82, and CD151[9-11]. Members of this family are involved in many physiological and pathological processes, such as fertilization, cellular adhesion, motility, and tumor invasion[9-12]. To date, tetraspanins are believed to act as molecular facilitators or adaptors, which form a network of interaction among the cell-surface molecules, known as the “tetraspanin web” or tetraspan-enriched microdomains[12,13]. Notably, some tetraspanin proteins have key roles in tumor initiation, promotion, metastasis, and angiogenesis.

CD9, which was identified as a suppressor of cancer spread[14], belongs to the tetraspanin family. Like other tetraspanins, CD9 has four putative transmembrane domains, which provide the short N- and C-terminal cytoplasmic domains, a small intracellular loop, and two extracellular loops[11,12] (Figure 1). CD9 is widely expressed on the surface of several types of cells, including many malignant tumor cells as well as normal hematopoietic, endothelial and epithelial cells[11,12]. 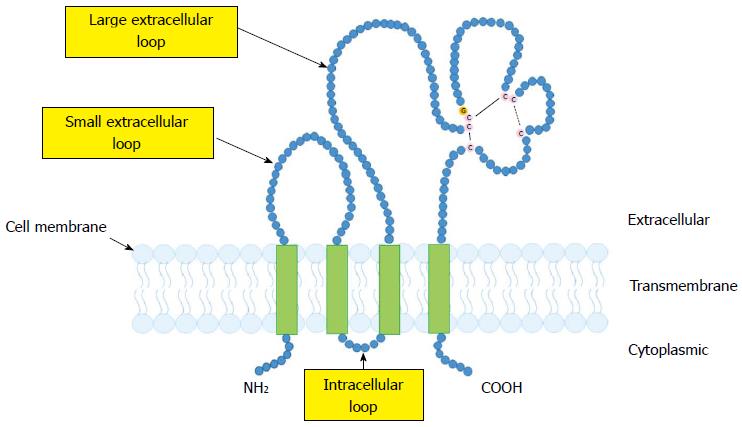 CD9 interacts with a number of transmembrane proteins, including integrins, immunoglobulin superfamily member EWI proteins (EWI-2 and EWI-F) and other tetraspanins (e.g., CD81 and CD151)[10-13], Claudin-1[15], epidermal growth factor receptor (EGFR)[16], and membrane-bound ligands for EGFR[17-19] (Table 1). These interactions form functional complexes, which facilitate cell adhesion, motility, and signaling[10,20-24]. For examples, antibody (Ab) ligation of CD9 induces homotypic aggregation of pre-B cells and augments their adhesion to bone marrow fibroblasts through the modification of integrins[10]. Treatment with anti-CD9 Ab can induce strong adhesion between stromal and hematopoietic cells[25,26] as well as inhibit the migration of malignant cells[27]. In addition, CD9 acts as a co-receptor for diphtheria toxin. CD9 does not bind directly to the toxin, but interacts with the diphtheria toxin receptor (transmembrane precursor of heparin-binding epidermal-growth-factor-like growth factor; HB-EGF), leading to the elevation of juxtacrine activity of HB-EGF[28,29]. Also, CD9 functionally associates with Fcγ receptors, and co-cross-linking of CD9-Fcγ receptors modifies signals for phagocytosis and inflammatory responses on macrophages[30].

From experiments manipulating CD9 in tumor cell lines, CD9 has been demonstrated to be primarily a suppressor of metastasis[27,37-40]. Several clinical studies have also shown an important prognostic value of CD9. The reduced CD9 expression is associated with poor prognosis in melanoma[41], non-small-cell lung cancer[28], and breast[37,42], colon[43], pancreatic[44], ovarian[45] and prostate[46] cancer. Expression of CD9 is also related to metastasis of the gastrointestinal carcinoma[43,44,47,48]. For example, reduced CD9 expression is significantly associated with more venous vessel invasion and liver metastasis in patients with colon cancer[27,43]. Although diverse physiological functions (clinical data) of CD9 have been suggested[49,50], we and others have found that the amount of CD9 is inversely correlated with lymph node status in gastric cancer[48] and in esophageal squamous cell carcinoma[47]. Moreover, expression of CD9 protein in gastric cancer tissues was significantly stronger in patients without regional lymph node or distant metastasis than in those with metastasis[51]. Furthermore, the reduction of CD9 protein was associated with distant metastasis of gastric cancer. Thus, decreased levels of CD9 are strongly associated with an increased risk of recurrence, especially in patients with N0 nodal status and M0 metastatic status. Low levels of CD9 expression are related to poor prognosis. These findings are consistent with previous reports. Therefore, reduced CD9 expression is generally related to more venous vessel invasion and metastasis as well as poor prognosis in most common types of cancer.

As mentioned above, many investigators believe that CD9 is a suppressor of tumor development. 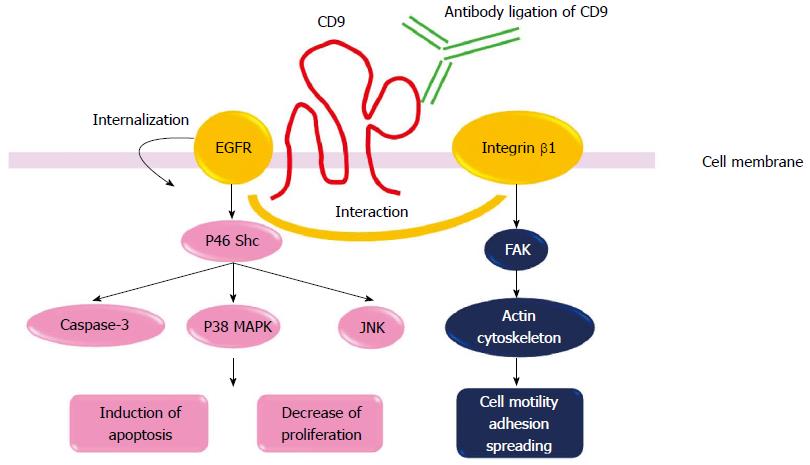 Therefore, TNF-α partly mediates the antiproliferative effects of CD9 in this case.

With regard to interactions between CD9 and integrins, CD9 seems to positively and/or negatively involve tumor development through functional modification of integrins. Indeed, the enhancement of integrin-mediated cell adhesion by CD9 inhibits metastasis and invasion of tumor cells and contributes to cell-adhesion-mediated drug resistance[56].

Improving molecular characterization has translated into better survival in select patients with advanced gastric and esophageal cancer. Trastuzumab, an antibody targeting the anti-human epidermal growth factor receptor 2 (HER2) extracellular domain, induces antibody-dependent cellular cytotoxicity and inhibits the HER2 downstream signals. In the ToGA study, standard chemotherapy regimens (capecitabine plus cisplatin or fluorouracil plus cisplatin) combined with trastuzumab resulted in a longer survival time than standard regimens without trastuzumab in patients with HER2-positive gastric cancer[57,58]. In addition, ramucirumab, an mAb targeting vascular endothelial growth factor receptor (VEGFR)-2, is the first biological treatment that showed survival benefits as a single-agent therapy for the second-line chemotherapy (REGARD trial) in patients with advanced gastric cancer who progressed after first-line chemotherapy[59]. An early report of the phase III RAINBOW trial, testing ramucirumab in combination with paclitaxel for the second-line therapy after platinum-fluoropyrimidine failure, also demonstrated an overall survival benefit of 9.6 mo vs 7.4 mo as compared with paclitaxel alone[60]. With recent success of ramucirumab, investigations with several other antiangiogenic agents have begun. These include the VEGFR-2 inhibitor, apatinib, and the multi-targeted tyrosine kinase receptor inhibitors, axitinib and pazopanib[60]. In addition to the HER family and VEGFRs, the phosphatidylinositol 3-kinase-AKT-mammalian target of rapamycin (mTOR) and the c-MET signaling pathways are promising candidates, and some molecular targeting agents are now in clinical investigation[61].

A number of recent reports have suggested that tetraspanin targeting by Abs, soluble large-loop proteins, RNAi technology, or adenoviral transduction methods could be therapeutically beneficial[62]. In the case of CD9, we and others have proposed that CD9 ligation is likely to be useful to treat malignancies. Ectopic expression of CD9 in small-cell lung carcinoma cells inhibited their proliferation[63], and adenoviral transduction of CD9 inhibited lymph node metastasis in an orthotopic lung cancer model[40]. With cDNA expression microarray experiments, CD9 was reported to be one of the genes upregulated in gastric cancer[64]. Thus, CD9 expression in non-cancerous tissues is lower than that in gastric cancer tissues, indicating that adverse effects of anti-CD9 treatment on normal gastrointestinal tissues might be tolerable.

Tumor growth is dependent on angiogenesis, which forms new blood vessels[65]. Targeting tumor vessels provides several advantages over traditional anti-tumor approaches. CD9 enhancement contributes to tumor angiogenesis, presumably by affecting endothelial cell function, although their contributions to angiogenesis have not been shown using de novo tumor models. It was previously reported that CD9 gene transduction could downregulate VEGF-A expression, which is essential for angiogenesis[36]. Therefore, enhancement of CD9 functions may also be worthwhile in particular circumstances.

With regard to tumor metastasis, CD9 is involved in cell adhesion via enhancing integrin functions. In addition, associations of CD9 with EWI-2[10,11,13,66,67], EWI-F[68,69], EPCAM[70], Claudin-1[10] or HB-EGF[23,24] could have different effects on tumor cell invasion and metastasis. Indeed, the CD9 partners EWI-F[71] and EWI-2 can markedly affect cell migration[72], and EWI-2 influences the association of CD9 with membrane-type 1 matrix metalloproteinase (MT1-MMP; also known as MMP14) and MMP2[73], which could alter proteolysis during invasion. Thus, CD9 acts on multiple steps of tumorigenesis, and because CD9 function is dependent on its associating proteins, efficacy of the CD9-targeting therapy may be determined by expression of these associating molecules as well as CD9 itself.

Molecular mechanisms for CD9 functions have been understood through identification of CD9-associating proteins. Ab ligation of CD9 is a powerful tool to change CD9 functions, and we showed apoptotic signals after CD9 ligation in gastric cancer cells as well as successful treatment of gastric-cancer-bearing mice with anti-CD9 Ab. CD9 influences intracellular signals, cell adhesion, and cell proliferation, and is involved in several events during development of gastric cancer. Taken together with evidence from clinical data, the manipulation of CD9 is likely to have the potential to improve clinical results of therapy for gastric cancer. When implementing CD9-targeted therapy in gastric cancer, we should come up with various ideas to enhance CD9 functions.