Prostatic brachytherapy with permanent seed implants is a recent and safe radiation therapy technique associated with radiation-induced digestive disease. Argon plasma coagulation procedure is a validated modality in the management of haemorrhagic radiation proctitis, which is known to occasionally induce chronic rectal ulcers. We report here an original case report of an acute painful rectal ulcer as a consequence of the combination of short-term therapy with non-steroidal anti-inflammatory drugs therapy, prostatic brachytherapy with malposition of seed implants and argon plasma coagulation procedure in a patient with haemorrhagic radiation proctitis. The description of this clinical observation is essential to recommend the discontinuation of non-steroidal anti-inflammatory drugs therapy and the control of the position of seed implants in case of prostatic brachytherapy before argon plasma coagulation for radiation-induced proctitis.

Core tip: Endoscopist should be made aware of the potential dramatic outcome when treating patients with argon plasma coagulation when they are on non-steroidal anti-inflammatory drugs and previously treated for prostate cancer with prostatic brachytherapy.

Prostatic brachytherapy with permanent seed implants is a recent and safe prostatic radiation therapy technique which is associated with radiation-induced digestive diseases like external beam radiotherapy[1]. Argon plasma coagulation (APC) procedure is a validated modality in the management of haemorrhagic radiation proctitis but may be rarely associated with chronic rectal ulcers[2]. Finally, non-steroidal anti-inflammatory drugs (NSAIDs) are known to occasionally induce colitis with parietal ulceration of lower gastrointestinal tract[3]. Chronic NSAIDs therapy has been recently reported as a possible risk factor of chronic ulcer formation after external beam radiotherapy and APC procedure[4]. We report here an original case report of an acute rectal ulcer as a consequence of the combination of short-term therapy with NSAIDs, prostatic brachytherapy with the malposition of seed implants and APC procedure.

A 69-year-old man was referred to our institution for management of rectal bleeding. His previous medical history included chronic migraine treated with NSAIDs in case of acute migraine headache, and T2aN0 prostatic cancer treated fourteen months earlier with prostatic brachytherapy and permanent 125Iodine seed implants. He reported the occurrence of blood in his stool for three months without other digestive symptoms and without concomitant anticoagulant or antiplatelet therapy. The patient underwent an initial colonoscopy which revealed a focal haemorrhagic radiation proctitis. He began daily corticosteroid enemas with a suspension containing 100 mg of hydrocortisone acetate. The persistence of rectal bleeding after 2 mo of sequential medical therapy led us to propose a new endoscopic evaluation (revealing no new digestive lesions) with a single APC procedure. Two weeks later, the patient reported self-medication with a high dose of oral ketoprofen (600 mg daily) for severe migraine headaches during one week followed by intense proctalgia requiring opioid medication with a maximal dose of 60 mg of morphine sulphate daily. He also complained of rectal emission of mucus viscosity without recurrence of bleeding. A new rectosigmoidoscopy revealed a 2 cm long ulcer of anterior circumference of the low rectum (Figure 1). A complementary radiologic exam with pelvic magnetic resonance imaging (MRI) confirmed, on the axial T1-weighted after injection of gadolinium chelate (Figure 2A) and T2-weighted (Figure 2B), the presence of a large ulceration with regular edges sitting without local infectious complication or digestive fistula. The occurrence of this digestive complication led us to analyse a pelvic MRI performed 6 mo before the endoscopic APC procedure and to observe the presence of 125Iodine seed implants in an abnormal position, sitting in the outer part of the anterior rectal wall instead of the large ulceration on an axial T1-weighted after injection of gadolinium chelate (Figure 3). A decrease of proctalgia was observed after 3 mo with progressive reduction of opioid analgesic dosage. After 6 and 12 mo, a rectosigmoidoscopy and a pelvic MRI revealed a persistent rectal ulcer with the same initial characteristics. Analgesic treatment was stopped 12 mo after the diagnosis of the rectal ulcer and a definitive withdrawal of NSAIDs was recommended. 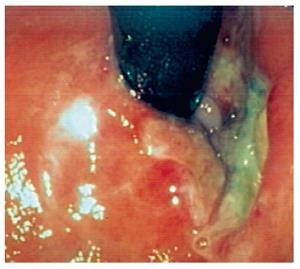 Figure 1 Ulcer located at the anterior part of the low rectum in retroflex examination with rectosigmoidoscopy. 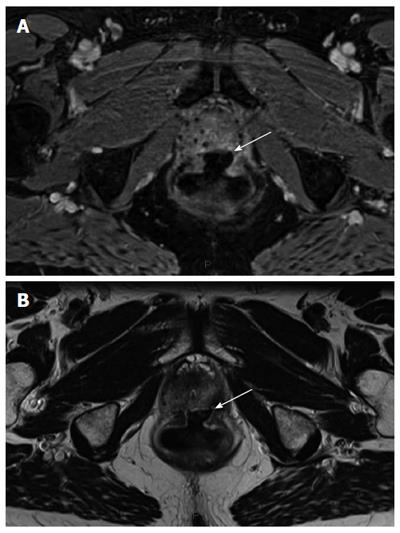 The prostatic brachytherapy with malposition of seed implants is known to generate rectal ulcers with such possible dramatic complications as rectourethral fistulas and the necessity of complex surgery with digestive and urinary derivation[5]. In this case, the initial endoscopy confirmed only active haemorrhagic radiation proctitis without initial digestive ulcerative lesions, and therefore allowed us the possibility of performing an APC procedure. The endoscopic diagnosis of the rectal ulcer after the APC procedure led us to discover the recent self-medication of the patient with a high dose of oral ketoprofen (600 mg daily). Pelvic MRI analysis without the detection of rectourethral fistulas led us to propose a symptomatic medical treatment. Comparative analysis of previous MRI data identified the malposition of seed implants in the anterior rectal wall. However, no clinical report with similar results has ever been published. Therefore, no medical recommendations are available in the context of rectal malposition of seed implants with a medical requirement of an APC procedure. We can suggest that NSAIDs therapy probably contributed to the development of this ulcer formation after the APC procedure. Thus, in the context of increasing use of prostatic brachytherapy, and in order to decrease the likelihood of a dramatic outcome following an APC procedure for radiation-induced proctitis, it seems necessary for endoscopists to advise the discontinuation of NSAIDs therapy and the control of the position of seed implants in case of prostatic brachytherapy.

A 69-year-old man with a history of prostatic brachytherapy presented a painful acute rectal ulcer after non-steroidal anti-inflammatory drugs (NSAIDs) treatment and a plasma argon procedure.

Combined digestive toxicity of NSAIDs and plasma argon procedure in the context of radiation induced proctitis due to rectal malposition of seed implants after prostatic brachytherapy.

No biological inflammatory and infectious syndrome.

Rectosigmoidoscopy (retroflex examination) showed ulcer located at the anterior part of the low rectum and a pelvic magnetic resonance imaging showed presence of 125Iodine seed implants in an abnormal position, sitting in the outer part of the anterior rectal wall instead of the large ulceration.

Inflammatory and necrotic ulcer due to the toxicity of NSAIDs and plasma argon procedure.

Discontinuation of NSAIDs and opioid analgesy.

Radiation-induced proctitis is known to be a local pelvic complication of prostatic brachytherapy, but to date no case has reported the toxic combination of NSAIDs and plasma argon procedure in the context of malposition of seed implants.

Argon plasma coagulation is an endoscopic procedure used primarily to control bleeding from certain lesions in the gastrointestinal tract and brachytherapy is a type of radiation treatment using radioactive seed implants inserted directly into the tumour with the delivery of high doses of radiation to the tumour.

Endoscopist must control the position of seed implants (in the context of prostatic brachytherapy) before each argon plasma procedure for haemorrhagic radiation proctitis and the information to discontinue NSAIDs must be given to the patient in any case of coagulation therapy of the digestive tract.

This article applies retrospective radiological analysis to identify the origin of potential dramatic toxicity of plasma argon therapy in context of NSAIDs treatment and prostatic brachytherapy.