Article-Type of This Article
Research Report

AIM: To investigate if azathioprine could reduce adenoma formation in ApcMin/+, a mouse model of sporadic intestinal tumorigenesis.

METHODS: Azathioprine was administered via drinking water (estimated 6-20 mg/kg body weight per day) to ApcMin/+ and wildtype mice. Control animals received vehicle only (DMSO) dissolved in drinking water. At 15 wk of age all mice were sacrificed and intestines of ApcMin/+ were harvested for evaluation of polyp number. Azathioprine induced toxicity was investigated by immunohistochemical analysis on spleens.

RESULTS: All azathioprine treated mice showed signs of drug-associated toxicity such as weight loss and development of splenic T-cell lymphomas. Although this suggests that the thiopurine concentration was clearly in the therapeutic range, it did not reduce tumor formation (48 ± 3.1 adenomas vs 59 ± 5.7 adenomas, P = 0.148).

CONCLUSION: We conclude that in the absence of inflammation, azathioprine does not affect intestinal tumorigenesis.

The thiopurines azathioprine and 6-mercaptopurine are widely used to induce and maintain remission of inflammatory bowel disease (IBD)[1-4]. In addition to their immunosuppressive effects, exposure to thiopurines is associated with a substantially reduced risk of developing colorectal cancer in patients with IBD[2,5].

The presumed mechanism of action of thiopurines is through selective inhibition of the GTPase RAC1[6,7]. This member of the Rho family of GTPases acts as a key-component in diverse signaling pathways and plays a critical role in many cellular processes such as proliferation, apoptosis and migration[8]. It has recently been shown that Rac1 signaling plays a key role in intestinal adenoma formation downstream of the mutation in Apc[9]. The Apc gene is frequently mutated in intestinal adenomas and carcinomas and patients with familial adenomatous polyposis (FAP) carry a germline mutation in one copy of the APC gene[10]. ApcMin/+ mice carry a germ line mutation in Apc similar to patients with FAP and can be used to model FAP specifically or Apc dependent adenoma development more in general[11].

The protocol of this study was approved by the animal ethics committee of the University of Amsterdam (permit number ALC102806). ApcMin/+[11] and littermate wild type C57B/6J mice of five weeks old (12 males and 12 females of each genotype) were ordered at the Jacksons Laboratory. Upon arrival animals were given drinking water in which azathioprine (Sigma Aldrich A4638) was dissolved at 0.04 mg/mL as previously described by others[12]. The estimated dose was 6-20 mg/kg body weight per day, given that a mouse weighs approximately 20-30 g and drinks approximately 4-8 mL of water per day[12]. Control animals received vehicle only (DMSO) dissolved in drinking water. We expected mice to develop a mean of 60 polyps (with 10% standard deviation) and reasoned that azathioprine could only be clinically applicable if the polyp number would be reduced by at least 25%. At a P of 0.05 (alpha 0.025) and power of 0.8, the sample size was calculated for 6 animals by group.

All data are presented as mean ± SE. For animal experiments, the Mann-Whitney test was used. For the analysis of adenoma size distribution, a two-way ANOVA was used.

RESULTS
Treatment with azathioprine results in severe toxicity in mice

Two weeks after the start of azathioprine administration (dissolved in the drinking water at 0.04 mg/mL), ApcMin/+ and wild type female mice started to lose weight and became moribund whereas female control mice treated with solvent only continued to gain weight (Figure 1A and B). According to local animal research guidelines we euthanized mice losing more than 15% of initial weight, resulting in termination of the entire group of 12 female mice receiving azathioprine by the end of the fourth week of treatment. In contrast, male mice did not show any symptoms of drug-associated toxicity at this time point. Post mortem investigation showed signs of profound anemia with discoloration of extremities and internal organs of all azathioprine treated female mice. Upon examination of the intestines, we did not identify polyps in these 9-wk-old animals.

In order to reduce potential drug toxicity in the remaining male animals, we lowered the azathioprine dose to 0.02 mg/mL at four weeks after the start of treatment. Although the body weight of male mice remained stable at first, we eventually observed weight loss in male animals. To prevent further deterioration of the mice, we terminated the experiment at fifteen weeks of age (Figure 1C).

Azathioprine treatment results in the development of splenic T-cell lymphomas

We observed enlargement of the spleen in all azathioprine treated mice (both controls and ApcMin/+ mice), but in none of the control animals (Figure 2A). The development of splenic lymphomas is a known adverse effect of azathioprine treatment in both humans and mice[14]. We therefore performed further histological evaluation of samples of azathioprine treated control and ApcMin/+ mice. All spleens of azathioprine treated animals showed an expanded red pulp with a pleomorphic population of lymphocytic blasts that displayed prominent variation in nuclear size, contour and atypical mitoses (Figure 2B). This is diagnostic of a diffuse lymphoproliferative disease. We performed immunohistochemical staining to further analyze the composition of these infiltrates. This showed that the pre-existent peri-arteriolar B- and T-cell areas were preserved while the red pulp was diffusely infiltrated by Cd3 positive atypical lymphocytes (Figure 2C). Analysis of proliferation using Ki67 showed that proliferative activity in germinal centers was retained as expected, whereas splenic T-cell lymphomas exhibited a near 100% proliferative index (Figure 2D). β-catenin did not show nuclear labeling in either ApcMin/+ or wild type mice (Figure 2D). This suggests that the lymphomas developed in an Apc independent manner. This is consistent with the fact that no difference was observed in the severity of lymphoma development between control and ApcMin/+ mice. 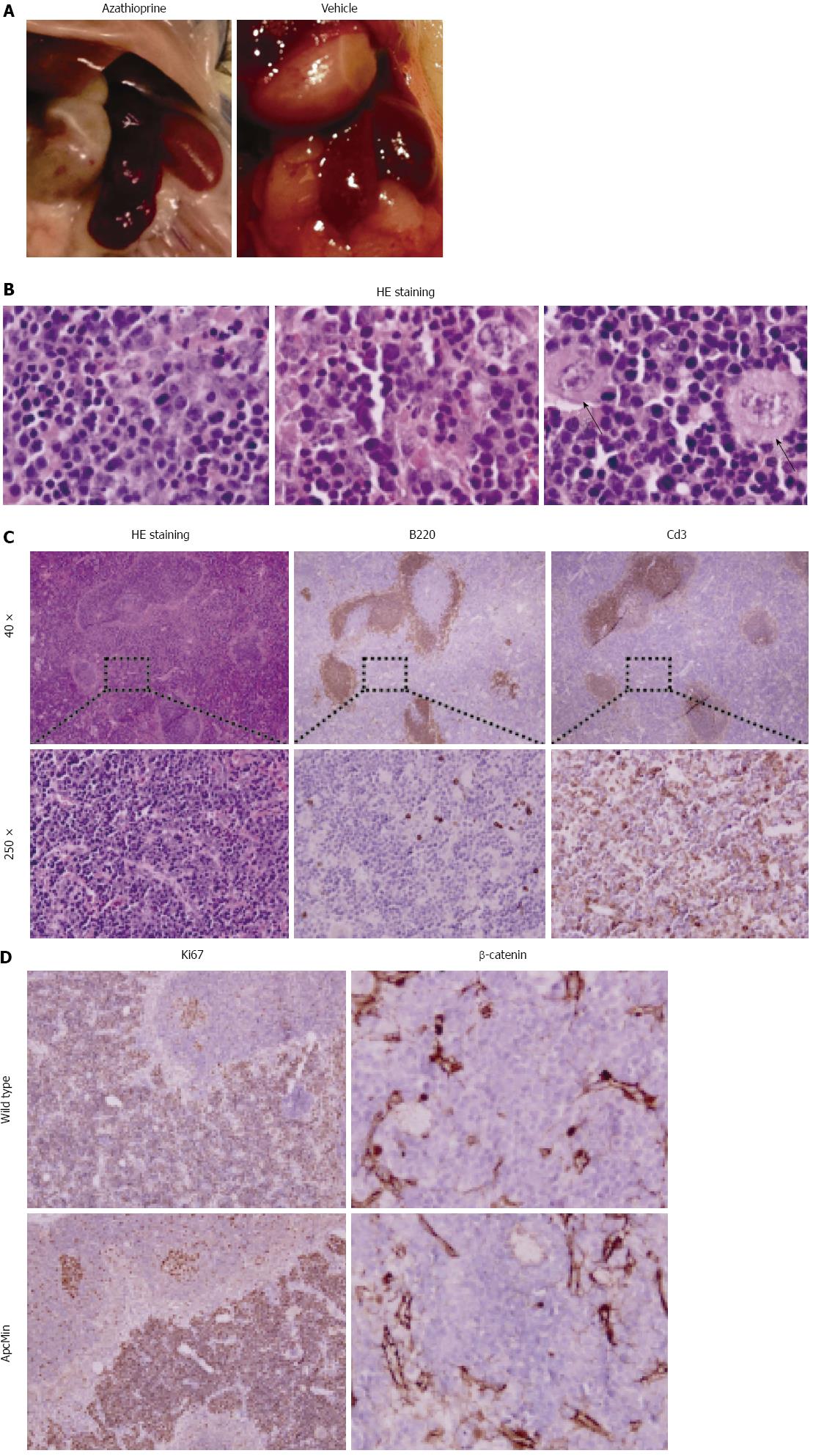 We next assessed if intestinal adenoma development was affected by the administration of azathioprine. Animals that had received azathioprine (n = 6) did not exhibit a significant decrease in polyp numbers compared to ApcMin/+ mice that had received vehicle only (n = 6) (48 ± 3.1 adenomas vs 59 ± 5.7 adenomas respectively, P = 0.148, Figure 3A). Furthermore, analysis of adenoma localization and size did not show any difference between azathioprine and vehicle treated animals (Figure 3B and C). Based on these results we concluded that azathioprine treatment did not affect the incidence or progression of adenoma development in ApcMin/+ animals. 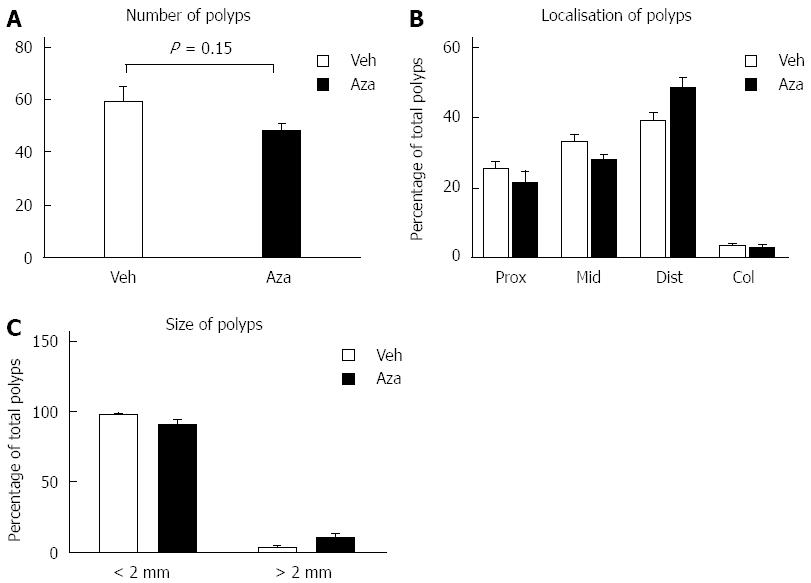 Use of thiopurines is associated with a reduced risk of developing colorectal cancer in patients with IBD but their role in sporadic tumor formation has thus far not been investigated. In our study, treatment of mice with the highest tolerable azathioprine dose, results in severe drug associated toxicity both in ApcMin/+ and wild type mice. Azathioprine treated animals suffered from profound weight loss and displayed development of splenic lymphomas. Nonetheless, even at this high dose, azathioprine treatment did not affect Apc dependent intestinal adenoma development in mice.

In humans, the major side effects of treatment with azathioprine are gastrointestinal complaints such as nausea and abdominal pain[15], hepatotoxicity[16], pancreatitis[17] and bone marrow depression[18]. We observed substantial toxicity in all azathioprine treated mice. Surprisingly, this resulted in significant more morbidity in female mice compared to males. Azathioprine induced toxicity is related to activity of the enzyme thiopurine S-methyltransferase (TPMT)[19,20]. Therefore the deficiency of TPMT enzyme activity may cause increased sensitivity to azathioprine induced toxicity[21,22]. In accordance to this it was recently shown that TPMT enzyme activity was lower in females than compared to males[23]. Although we did not assess TPMT activity in our experiments, this may explain why female mice were more vulnerable to azathioprine than males.

Thiopurine use is also associated with an increased relative risk but small absolute risk in development of lymphomas[24-26]. Also in our hands mice display a remarkable susceptibility to develop azathioprine-induced lymphomas. This suggests that the azathioprine may have been overdosed in our experiment or that mice have an increased susceptibility to lymphoma development. Unfortunately we have so far been unable to determine drug levels in mouse blood in our institute. However, since overdosing would more likely result in overestimation of the protective effect of azathioprine, it is unlikely to explain the lack of effect on adenoma development.

The lack of effect of azathioprine on adenoma development in our experiments could be due to pleiotropic effects on cellular signaling by azathioprine. Another potential difference between the genetic loss of Rac1 signaling as investigated by Myant et al[9] and treatment with azathioprine is that genetic deletion of Rac1 occurred concurrent with loss of Apc whereas the ApcMin/+ mice in our experiments carried a germline Apc mutation. The effect of Rac1 inhibition could be mediated at the earliest stages of adenoma development. Since we started azathioprine treatment at the age of five weeks, it may be that precursor lesions were already established before the initiation of azathioprine treatment. Although azathioprine is known to reduce Rac1 signaling in humans, we can not formally exclude that in mice Rac1 signaling remains unaltered during azathioprine treatment. The reduced risk of developing colorectal cancer in patients with IBD treated with thiopurines was observed in a retrospective analysis of 2578 patients in which 1% developed advanced neoplasia (high grade dysplasia or colorectal cancer). Whether this association is the result of a better control of inflammation in thiopurine treated patients, a direct effect on inflammation driven carcinogenesis or potential confounding factors will be hard to elucidate. The results from our current study suggest that azathioprine may not prevent Apc dependent sporadic intestinal tumorigenesis.

Treatment with thiopurines is associated with a reduced risk of developing colorectal cancer in patients with inflammatory bowel disease. If thiopurines can also reduce adenoma formation in the absence of inflammation remains thus far unknown.

The presumed mechanism of action of thiopurines is through selective inhibition of the GTPase RAC1. It has recently been shown that Rac1 signaling also plays a key role in sporadic intestinal adenoma formation downstream of the mutation in Apc. The Apc gene is frequently mutated in intestinal adenomas and carcinomas and patients with familial adenomatous polyposis (FAP).

The role of azathioprine in inflammation and inflammation associated cancer has been studied extensively. In the current manuscript the authors report for the first time that in the absence of inflammation, azathioprine does not reduce adenoma formation in a mouse model of sporadic intestinal tumorigenesis.

The molecular target of azathioprine, RAC1 has recently been implicated as a critical player during sporadic intestinal tumorigenesis. Given the extensive clinical experience with thiopurines, this may thus be a candidate for chemoprevention of colorectal cancer in patients that have increased risk for developing this disease. Here the authors tested this hypothesis by treating ApcMin/+ mice with azathioprine and found that azathioprine does not reduce adenoma formation.

Rac1 is a member of the Rho family of GTPases and acts as a key-component in diverse signaling pathways and plays a critical role in many cellular processes such as proliferation, apoptosis and migration. ApcMin/+ mice carry a germ line mutation in Apc similar to patients with FAP and can be used to model FAP specifically or Apc dependent adenoma development more in general.

In this experimental study some evidence is given that azathioprine does not reduce adenoma formation in the Apcmin/+ mouse model of sporadic intestinal tumorigenesis.