The known factors that have contributed to the decline of Helicobacter pylori (H. pylori) eradication rate include antibiotic resistance, poor compliance, high gastric acidity, high bacterial load, and cytochrome P450 2C19 (CYP2C19) polymorphism. Proton pump inhibitor (PPI) is important in the eradication regimen. The principal enzyme implicated in the metabolism of PPIs is CYP2C19. The effects of PPI depend on metabolic enzyme, cytochrome P450 enzymes, and CYP2C19 with genetic differences in the activity of this enzyme (the homozygous EM, heterozygous EM (HetEM), and poor metabolizer). The frequency of the CYP2C19 polymorphism is highly varied among different ethnic populations. The CYP2C19 genotype is a cardinal factor of H. pylori eradication in patients taking omeprazole- based or lansoprazole-based triple therapies. In contrast, the CYP2C19 polymorphism has no significant effect on the rabeprazole-based or esomeprazole-based triple therapies. The efficacy of levofloxacin-based rescue triple therapy might be also affected by the CYP2C19 polymorphism, but CYP2C19 genotypes did not show obvious impact on other levofloxacin-based rescue therapies. Choice of different PPIs and/or increasing doses of PPIs should be individualized based on the pharmacogenetics background of each patient and pharmacological profile of each drug. Other possible factors influencing gastric acid secretion (e.g., IL-1β- 511 polymorphism) would be also under consideration.

Core tip: This manuscript outlines the impact of cytochrome P450 2C19 (CYP2C19) polymorphism on eradication of Helicobacter pylori (H. pylori), including the influences on first line triple therapies, rescue therapies and levofloxacin- based therapies. We suggest that the strategy of eradicating H. pylori should include the examination of CYP2C19 polymorphism, especially for patients receiving rescue therapies or with drug resistances.

According to Maastricht IV Consensus Report, indications for anti-Helicobacter pylori (H. pylori) therapy include gastroduodenal ulcer disease, gastric low-grade mucosa-associated lymphoid tissue lymphoma, atrophic gastritis, and early gastric cancer following endoscopic resection[1]. The first-line regimen for H. pylori eradication includes proton pump inhibitor (PPI), clarithromycin (CAM), and amoxicillin (AMX), or metronidazole. However, the failure rate of triple anti-H. pylori therapies has increased up to 30%[2,3]. The known factors include antibiotic resistance, poor compliance, high gastric acidity, high bacterial load, and cytochrome P450 2C19 (CYP2C19) polymorphism that contribute to the decline of H. pylori eradication rate[4] So the triple regimen should be abandoned when the CAM-resistance rate in the region is more than 15%-20%, because many studies published recently have demonstrated that the intention to treatment eradication rate is falling short of 80%[5-7]. The same consideration should be also suitable for high levofloxacin resistance area.

According to the recommendation of the Asian Pacific Helicobacter pylori meeting 2012 in Singapore: (1) in areas with low clarithromycin resistance rates, standard triple therapy should be the primary choice, while bismuth-containing quadruple, sequential therapy and concomitant therapy could be alternative first-line therapies; and (2) in areas with high clarithromycin resistance, regimens including bismuth-containing quadruple, sequential therapy and concomitance should be the better choice for first-line regimens. So the antibiotics resistance should be analyzed in the high clarithromycin and/or levofloxacin resistant rate area.

PPI is important in the eradication regimen. Except for the anti-secretory effect, PPI can also increase the efficacy of the antibiotics by decreasing antibiotic decay in the gastric juices, and also possesses direct anti-H. pylori activity[8-11]. The mechanisms whereby PPIs influence the efficacy of eradicating H. pylori include (1) PPIs make acid-labile antibiotics more stable by increasing gastric PH value, especially clarithromycin, thereby increasing concentration and H. pylori sensitivity to antibiotics; and (2) PPIs may alter transport of antibiotics from plasma to gastric juices, increasing luminal concentrations and elevating the success rate of eradication[12]. The importance of potent acid inhibition during eradication therapy has recently been demonstrated[13-17]. 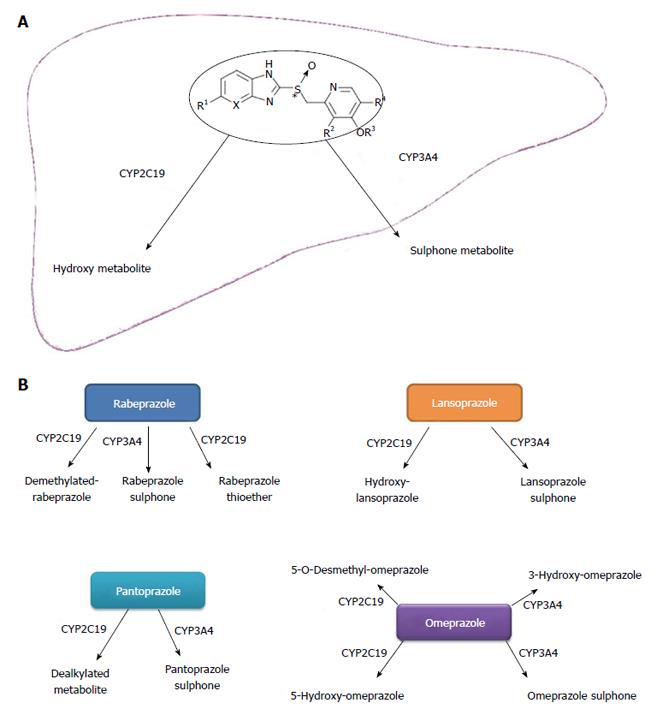 HomEM produces abundance of the enzyme, and metabolizes PPI at high rates. HetEM, with one wild-type and one mutation-type, compromises the rates of PPI metabolism (Table 1).

Several trials have been published concerning the effect of the CYP2C19 genotype on eradication of H. pylori by various PPIs-based therapies[24-29]. Cure rates of standard triple therapy depend on the availability of PPI, which itself depends on the CYP2C19 and MDR polymorphisms[1]. Besides these, we would point out the impact of CYP2C19 genotypes on levofloxacin-based first-line and rescue therapies. This was seldom emphasized in previous articles.

For analysis of CYP2C19 genotypes, all enrolled patients’ peripheral blood leukocytes were obtained before the eradication therapy was begun. DNA was extracted from the leukocytes with a commercially available kit (QIAGEN K.K., Tokyo, Japan) and stored until use. Genotyping procedures for identifying the CYP2C19 wild type (wt) gene and two mutated alleles, CYP2C19 m1 and CYP2C19 m2, were performed by a polymerase chain reaction-restriction fragment length polymorphism method with allele-specific primers[30]. However, this technique is expensive and not all medical unit can carry out it. This is one of the limitations for managing H. pylori infection.

The frequency of the CYP2C19 polymorphism is highly varied among different ethnic populations. According to previous reports, Asian people have a higher proportion of poor metabolizers compared to whites[14]. Approximately 2%-6% of Caucasians and 1% of African-Americans have been identified as PM, but this reaches more than 14.0% in Asian populations[31-33]. For example, the frequency of PM in Japanese (19%-23%) is much highe[34-36].

On the other hand, the prevalence rate of HomEM is about 70% for Caucasians, but only 30%-40% for Asians[37]. Since the CYP2C19 genotype is related to different abilities of PPIs to inhibit gastric acid secretion, genotyping of CYP2C19 gene would be a useful tool in the optimization of H. pylori eradication therapy. Therefore, differences of geographic distribution should be taken into consideration in selecting kinds or doses of PPIs for eradication.

PPIs were introduced in 1989; they targeted the gastric H+/ K+-ATPase. PPIs result in a major medical therapeutic advance in the treatment of peptic ulcers and GERD due to more rapid healing of the mucosal lesions and symptom relief.

PPIs are inactive in their native form and are rapidly metabolized by the liver. They are acid-activated prodrugs, and the plasma level of PPIs at the time point of the gastric acid secretion would influent the efficacy of PPIs. The rate of the metabolism is dependent on the character of the cytochrome P450 system, especially S-mephenytoin 4’-hydroxylase (CYP2C19)[38]. CYP3A4 is also an important factor for this[39]. The genetic polymorphisms of CYP2C19 may bring about differences in pharmacokinetics (PK), pharmacodynamics and clinical efficacy of PPIs.

The PK properties of PPIs (area under the plasmic concentration curve (AUC), Cmax and clearance) have significant difference between CYP2C19 PM and HomEM. The ratios of the mean AUC values in PM vs HomEM for omeprazole, pantoprazole, lansoprazole and rabeprazole are 6.3, 6, 4.3 and 1.8 respectively[40]. PM exhibits a 3- to 10-fold higher AUC than HomEM, while HetEM exhibits a 2- to 3-fold higher AUC[32,41].

Omeprazole is converted to hydroxyl and 5-O-demethyl metabolites by CYP2C19, and to the sulfone by CYP3A4[38]. The other PPIs also are extensively metabolized by CYP2C19 and CYP3A4. It has been shown that the mean intragastric pH values were higher in PM than in EMs for both omeprazole and lansoprazole[23]. Rabeprazole showed the least difference, and this is probably due to the metabolism of rabeprazole, which involves a non-enzymatic reduction[40]. Rabeprazole is metabolized to thioether-rabeprazole mainly via a non-enzymatic pathway, with minor involvement of CYP2C19[42]. Esomeprazole is a pure S-isomer of omeprazole, which is different from omeprazole composed of the equal amount of R- and S-isomer. R-omeprazole is more sensitive to CYP2C19 while S-omeprazole is less sensitive[43,44]; therefore, S-omeprazole provides better plasma level of the drug. Besides this, Esomeprazole has minimal first pass metabolism, undergoes less hydroxylation via CYP2C19, and has been shown to have greater gastric acid suppression effect than omeprazole[45,46]. So rabeprazole and esomeprazole appear less influenced by polymorphism of CYP2C19[12,14].

Furuta et al[47] first reported that mutations in exon 4[*3] and exon 5[*2] of CYP2C19 may affect the eradication rates in H. pylori-positive patients using a 1-week triple-therapy regimen with omeprazole, amoxicillin, and clarithromycin in 1998. A previous meta-analysis of 17 studies in Asian patients about the effects of CYP2C19 polymorphisms on the efficacy of PPI-based dual and triple therapy for H. pylori eradication was reported by Padol et al[48]. They found that omeprazole-based regimens were affected by CYP2C19 genotype status, whereas rabeprazole- and lansoprazole-based therapies were not. It also demonstrated significantly lower H. pylori eradication rates in HomEM compared to PM exposed to standard triple or dual therapies.

A meta-analysis showed a significant difference in H. pylori eradication rates between wild-type individuals and carriers of at least one LOF allele (OR = 2.26; 95%CI: 1.58-2.96; P < 0.0001). The difference was also obvious when HomEM and HetEM were compared (OR = 2.79; 95%CI: 1.77-4.41; P < 0.0001). However, when individual agents were analyzed separately, a significant difference was observed for omeprazole and lansoprazole only, whereas no difference between all genotypes was observed for rabeprazole[49].

It is reasonable that increasing dosage might overcome the effect of CYP2C19 polymorphism. One study in China demonstrated that increasing the dosage of omeprazole (20-40 mg) would improve the efficacy of eradication[56]. However, other studies did not find a similar dose-dependent effect by use of omeprazole, rabeprazole, and lansoprazole[57,58]; therefore, this strategy needs further survey.

A previous study reported that fluoroquinolone antibiotics decreased CYP3A- and CYP1A-mediated biotransformation by competitive inhibition, indicating a potential to interact with agents such as PPIs that are metabolized by these enzymes[60]. Thus, it can be reasonable that levofloxacin may inhibit the activity of CYP3A4 and/or CYP2C19, decreasing the metabolism of PPIs, and resulting in higher concentrations of PPIs. However, this hypothesis requires further investigation.

Empirically modified sequential therapy containing levofloxacin and high-dose esomeprazole showed different findings. The eradication rates were not affected by the CYP2C19 polymorphism. The use of a higher dose of esomeprazole could probably overcome the influence of CYP2C19 polymorphisms on the eradication rate of the modified sequential therapy[62]. Besides these, one study showed that the polymorphism of CYP2C19 did not influence quadruple therapy[63].

There might be some factors other than CYP2C19 also influencing the eradication results. Some studies suggest that the interleukin (IL)-1β-511 polymorphism affects eradication therapy through gastric acid inhibition[25,66,67]. This also disclosed that the cure rate of 1-week standard triple therapy with omeprazole in different IL-1β-511 genotypes ( especially in the IL-1β-511 C/C genotype) was influenced by CYP2C19 genotype status. Other studies have shown that IL-1β-511 genotype-dependent different cure rates of H. pylori infection are observed only in patients with HomEM of CYP2C19, but not in those with HetEM or PM genotype status[26,68]. On the other hand, CYP2C19 genotype-dependent differences in the cure rates of H. pylori infection are observed in patients with the IL-1β- 511 C/C genotype[25,26,68]. Nevertheless, previous studies did not find statistically significant difference of the cure rate among the CYP2C19 genotype subgroups in the IL-1β- 511 C/T and T/T groups. This evidence reveals that IL-1β-511 polymorphism has an impact on CYP2C19 polymorphism influencing eradication of H. pylori.

The possible best method might be to perform examination of CYP2C19 genotypes before starting eradication. Practically, routine examination of CYP2C19 genotype is not applicable and expensive. A meta-analysis showed that high-dose PPIs increase cure rates by around 6%-10% in comparison with standard doses. Increasing the dose of PPI from twice daily from 20 mg to 40 mg of esomeprazole or rabeprazole twice daily may increase cure rates by 8%-12%[1]. We suggest the following strategies to avoid the influence of CYP2C19 genotype after failure of eradication: (1) select PPI metabolized by the non-enzymatic pathway; and (2) consider increasing dose of CYP2C19 sensitive PPI.

Choice of different PPIs and/or increasing doses of PPIs should be individualized based on the pharmacogenetics background of each patient and pharmacological profile of each drug.