A 24-year-old man was referred for management of rectal cancer. Initially, he had visited another hospital with a complaint of abdominal pain and tenesmus, and an upper rectal tumor measuring 100 mm in diameter, without invagination, was diagnosed by colonoscopy (Figure 1). He had a family history of gastrointestinal cancer; his maternal uncle and grandmother had died of colorectal cancer, and his paternal grandfather had died of gastric cancer. At the time of his transfer to our hospital, laboratory tests were within the normal range, including a carcino-embryonic antigen level of 0.83 ng/mL and a carbohydrate antigen 19-9 (CA19-9) level of 9.2 U/mL. Computed tomography (CT) and magnetic resonance imaging showed intussusception caused by a large tumor in the pelvis and absence of distant metastases (Figure 2). Locally advanced upper rectal cancer causing intussusception was diagnosed, and a low anterior resection with complete removal of all regional lymph nodes and total mesorectal excision was performed. Intraoperatively, the invagination could not be repaired easily; therefore, the repair was abandoned. Instead, the tumor was removed en bloc to avoid dissemination of the cancer. After the proctectomy, coloproctostomy with a temporary diverting ileostomy was performed. Histopathologically, the surgical margin was negative for cancer, and based on the classification of the seventh edition of the Union for International Cancer Control (UICC), the tumor was diagnosed as a poorly differentiated adenocarcinoma, pStage IIA (T3, N0, M0) (Figures 3 and 4)[14]. To exclude Lynch syndrome, microsatellite status and immunohistochemistry of four deoxyribonucleic acid (DNA) mismatch repair proteins, including mutL homolog 1, postmeiotic segregation increased 2, mutS homologue 2 and mutS homologue 6, were checked; the tumor was microsatellite stable and retained expression of all mismatch repair proteins on immunohistochemistry. 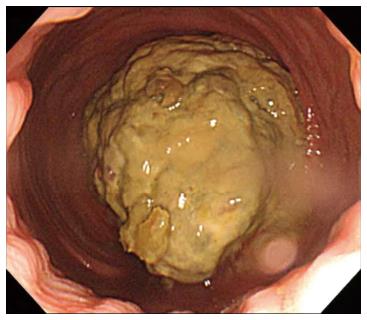 Figure 1 Colonoscopy showing a huge tumor at the upper rectum. The tumor, measuring 100 mm in diameter, does not show invagination on colonoscopy. 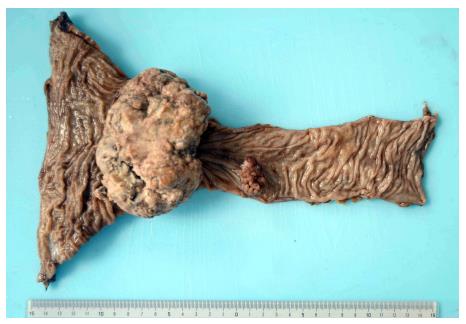 Figure 3 Specimen resected in en bloc fashion. The tumor is located at the upper rectum, and the margin is negative for cancer. Pathological staging is pStage IIA (T3, N0, M0). 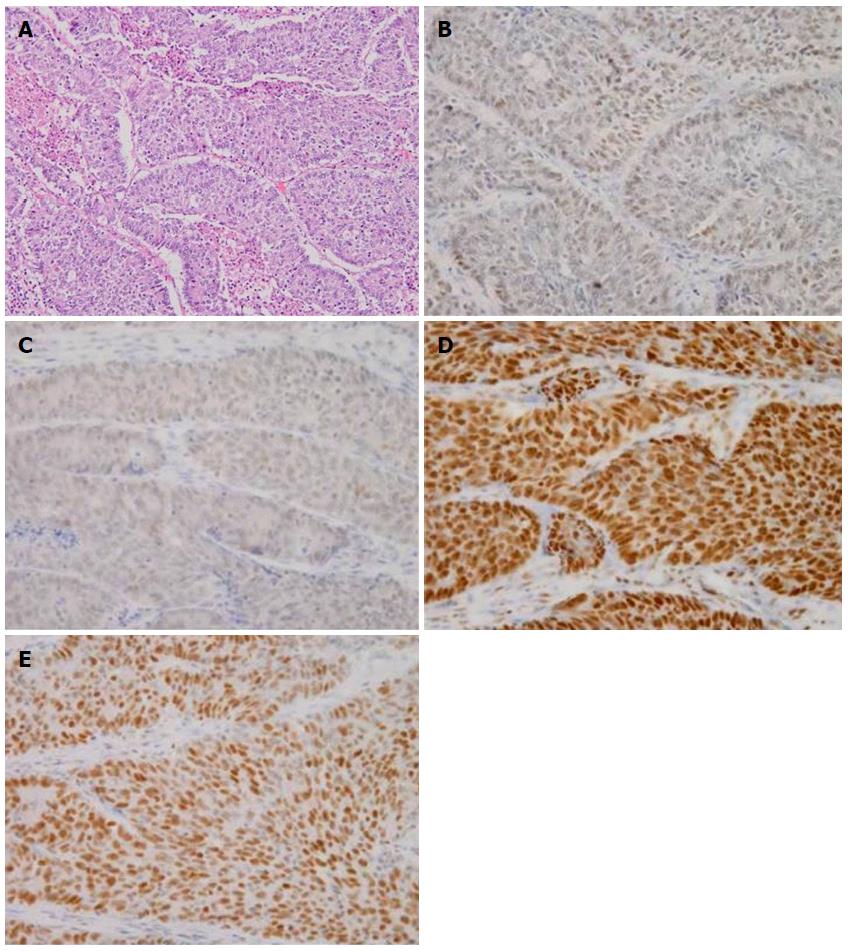 The patient underwent adjuvant XELOX (capecitabine plus oxaliplatin) for 6 mo, and 9 mo after the low anterior resection, he was alive without evidence of recurrence.

In the present case, the patient was diagnosed as having rectal cancer at a young age. Young patients with colorectal cancers are sometimes encountered, and they more frequently have Lynch syndrome, which is caused by germline mutations of DNA mismatch repair genes[15]. Microsatellite status and immunohistochemistry for DNA mismatch repair proteins were examined for the present tumor, but the patient did not have Lynch syndrome.

In conclusion, an extremely rare case of a young man with a sporadic rectal adenocarcinoma causing intussusception was reported.

The authors would like to thank Dr Hiroko Toda and Hiroyuki Yanai for help in making the pathological diagnosis.

A 24-year-old man with a family history of gastroenterological cancers.

Colonoscopy showed an upper rectal tumor, and computed tomography showed intussusception caused by a large tumor in the pelvis and absence of distant metastases.

The tumor was diagnosed as a poorly differentiated adenocarcinoma, pStage IIA.

The patient underwent a low anterior resection with complete removal of all regional lymph nodes and total mesorectal excision and adjuvant XELOX (capecitabine plus oxaliplatin).

Reports of intussusception due to rectal adenocarcinoma are extremely rare.

If the invagination cannot be repaired easily, we should abandon the repair and remove the tumor en bloc to avoid dissemination of the cancer.

The authors described an extremely rare case of a young man with a sporadic rectal adenocarcinoma causing intussusception in this manuscript.