METHODS: A search was performed on Pubmed/Embase to identify studies reporting the outcomes of the pit pattern classification in colorectal polyps. Retrieved records were evaluated and selected by two independent investigators. The number of patients, polyps and diagnostic performance of Kudo’s pit pattern classification were retrieved from suitable studies. Pooled sensitivities and specificities were calculated using fixed or random effect models according to their heterogeneity. Publication bias was evaluated using funnel plot, Egger’s test, and Begg’s test. Sensitivity analysis was performed by omitting one study at a time and selecting a subgroup consisting of 11 magnifying chromoendoscopy studies.

CONCLUSION: Kudo’s pit pattern classification is an accurate diagnostic method for the differentiation of neoplastic colorectal lesions. Publication bias is significant in the current available literature.

Core tip: According to the current available evidence, Kudo’s pit pattern classification is an accurate diagnostic method for the differentiation of neoplastic and non-neoplastic colorectal lesions. The risk of potential publication bias should be noted.

Colorectal cancer (CRC) is a major disease worldwide and is responsible for numerous deaths. There is clear-cut evidence that the prognosis of patients with CRC is strictly dependent on early detection and therapy of premalignant and malignant lesions[1]. The majority of CRCs arise from neoplastic polyps which have been proved to be premalignant lesions[2,3]. Histologically, colorectal polyps are classified as neoplastic (adenoma, adenocarcinoma) or non-neoplastic (hyperplastic, inflammatory, hamartomatous, etc.). The ideal endoscopic management of colorectal polyps involves two steps. First, any mucosal lesions need to be detected. Second, the lesions require to be characterized based on mucosal surface architecture and vessel changes; which lead to an endoscopic judgment of whether the lesion is neoplastic or non-neoplastic. However, conventional white-light endoscopy is inadequate in the real-time characterization of detected lesions. Magnifying endoscopy was introduced for the diagnosis of gastrointestinal diseases with magnified observations. Endoscopists can visualize fine details of mucosal surface pattern and vascular architecture. In 1980, chromoendoscopy was introduced into the field of endoscopy which improved the identification of mucosal pit pattern[4]. Magnification endoscopy combined with narrow band imaging (NBI) is widely used in the area of advanced endoscopy.

Recently, several studies proposed that the pit pattern analysis of colorectal lesions by magnifying colonoscopy is a useful and objective tool for differentiating neoplastic from non-neoplastic lesions[6]. The aim of this study was to meta-analyze the data of existing magnifying endoscopy trials using Kudo’s pit pattern classification for colorectal polyp characterization.

An extensive English-language literature search of the PubMed/MEDLINE and Embase databases for human studies was performed to identify relevant publications on the performance of Kudo’s classification in diagnosing neoplastic colonic polyps. The following search terms were used: magnifying endoscopy, sensitivity, specificity, chromoendoscopy, colorectal polyp and Kudo’s classification. No initial date limit was used. The search was updated until the end of March 2014. To expand our search, we also used public search engines, such as Google, to identify potentially suitable references. In addition, we searched English abstracts of the non-English literature in PubMed. References from the extracted articles, reviews, and previous meta-analyses were also consulted to complete the data bank. Two authors (Ali SM and Umm-a-OmarahGilani S) contributed to the data search.

Before commencement of the literature search, the inclusion criteria were defined as follow: (1) papers with full-text or abstract written in the English language; and (2) papers providing sufficient data for authors to construct a 2 × 2 contingency table to calculate sensitivity and specificity. When two articles were reported from the same study, the more informative publication was selected. In studies comparing Kudo’s classification to other criteria, only the data from the arm using Kudo’s classification were included. Exclusion criteria included: case reports or case series, reviews, duplicate reports, insufficient data in the article, and criteria other than Kudo’s classification were used in the article.

For manuscripts and abstracts which met our predefined eligibility criteria, two independent investigators (Ali SM and Liu J) independently selected data using a standard form from each study. Disagreements, if any, were resolved by a third reviewer (Li M). The flowchart of literature selection is shown in Figure 1. 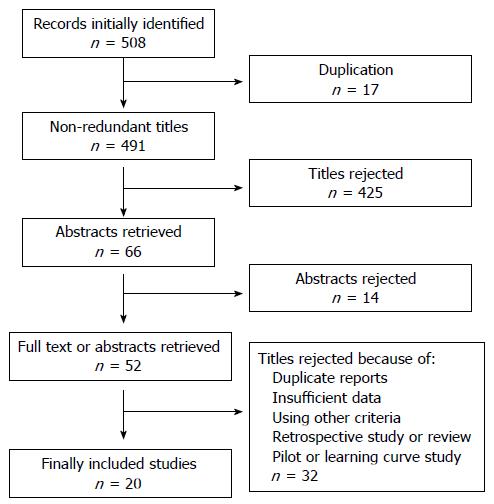 Figure 1 Flow chart describing the process of study selection.
Characteristics of the studies

For each included study, the following information was extracted: year of publication, country, type of endoscope, number of included patients, number of polyps examined, number of neoplastic polyps confirmed by histology, number of polyps truly positive and truly negative diagnosed according to Kudo’s classification. If one study had more than one arm using magnifying endoscopy in combination with a different imaging mode (i.e., staining and NBI), these arms were treated as individual studies.

For each study, the sensitivity and specificity of Kudo’s classification in comparison to histology were calculated from the original numbers given in the included studies by constructing 2 × 2 contingency tables. They were further calculated in the pooled results (with corresponding 95%CI). When significant heterogeneity was present, the random effects model (Dersimonian and Laird method) was used. Otherwise, the fixed effects model (Mantel and Haenszel method[7]) was used. Forest plots were constructed for visual presentation of the individual studies and the pooled results. A weighted symmetric summary receiver operating curve was plotted and the area under the curve (AUC) was calculated. An AUC of 1 indicated perfect performance and an AUC close to 0.5 indicated poor performance. The Cochran Q test and the inconsistency index (I2) were performed to evaluate the heterogeneity between studies[8]. Significant heterogeneity was deemed present if the P value was less than 0.1.

To evaluate publication bias, the funnel plot, Egger’s test, and Begg’s test were carried out. For the sensitivity analysis, we investigated the pooled sensitivity and specificity by removing one study each time. We also investigated a subgroup consisting of 11 magnifying chromoendoscopy studies.

A flow chart describing the process of study selection is shown in Figure 1. A total of 507 titles were retrieved during the literature search, and 20 studies were finally included in the meta-analysis. These studies were all published as full-texts. The main characteristics of the studies eligible for the meta-analysis are shown in Table 1. The studies were conducted in Germany, Brazil, United States, United Kingdom, Netherlands, Japan, and China. All studies used Kudo’s classification as the diagnostic criteria, where Type I and Type II indicated non-neoplastic polyps, and Type III to V indicated neoplastic polyps. 10 studies used magnifying chromoendoscopy[9-18], and the other studies used chromoendoscopy[19,20] (n = 2), narrow band imaging (NBI)[21,22] (n = 2), NBI magnifying endoscopy[23,24] (n = 2), and i-SCAN[25] (n = 1). Three studies[26-28] used a mixture of imaging modalities. 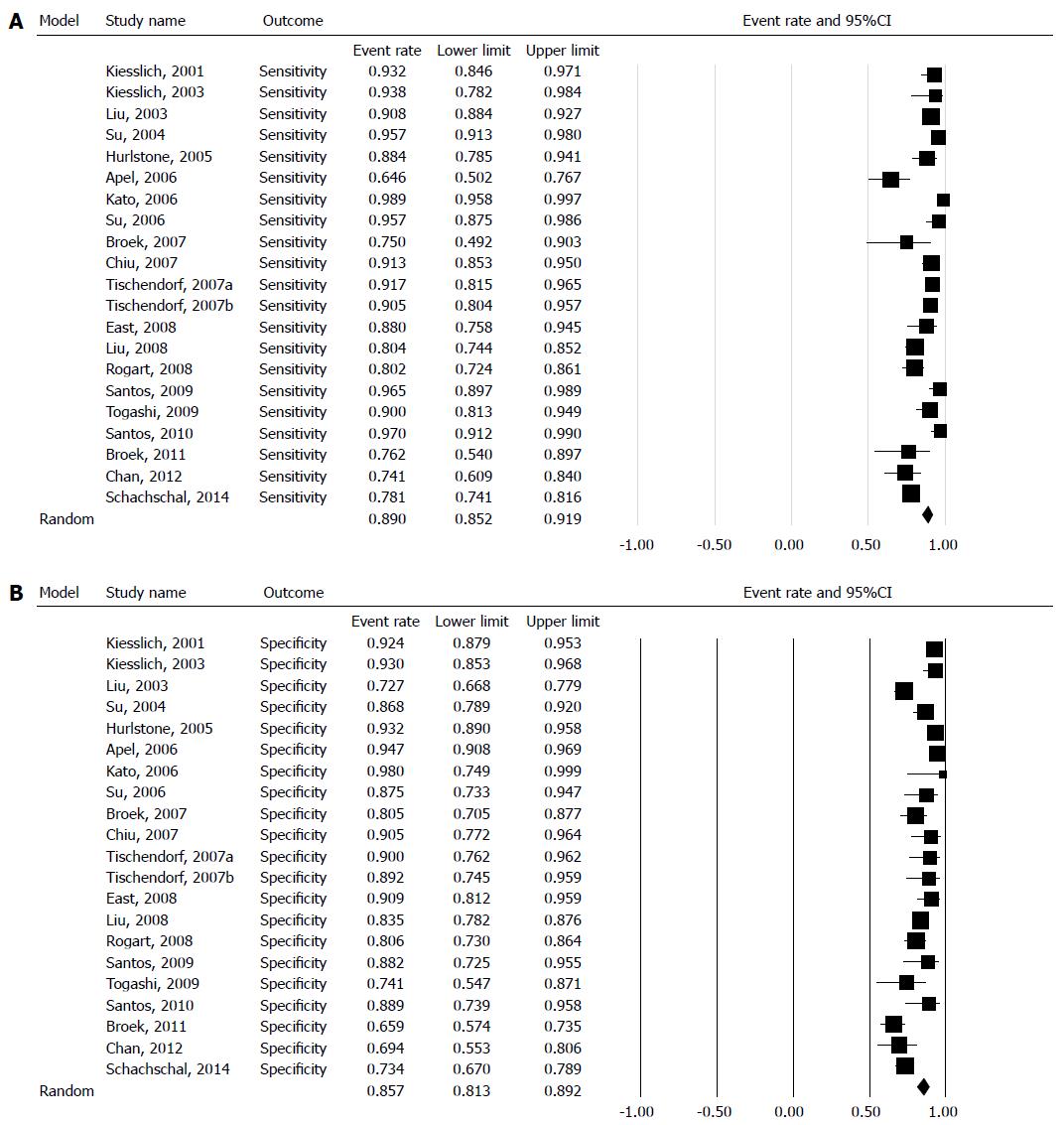 Figure 2 Forest plot showing the sensitivity (A) and specificity (B), with 95%CI, for diagnosing neoplastic polyps. 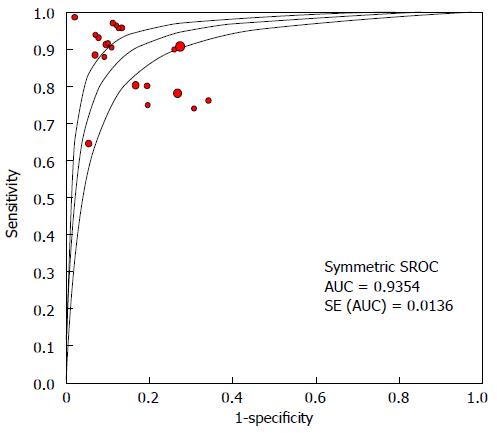 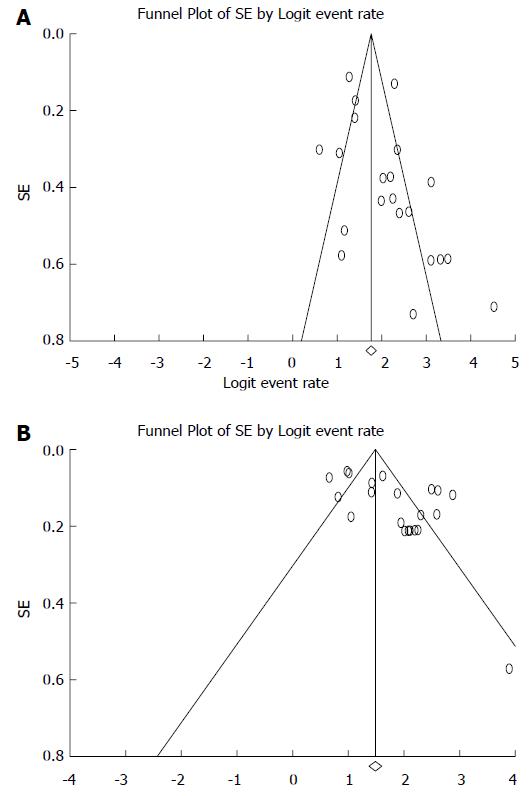 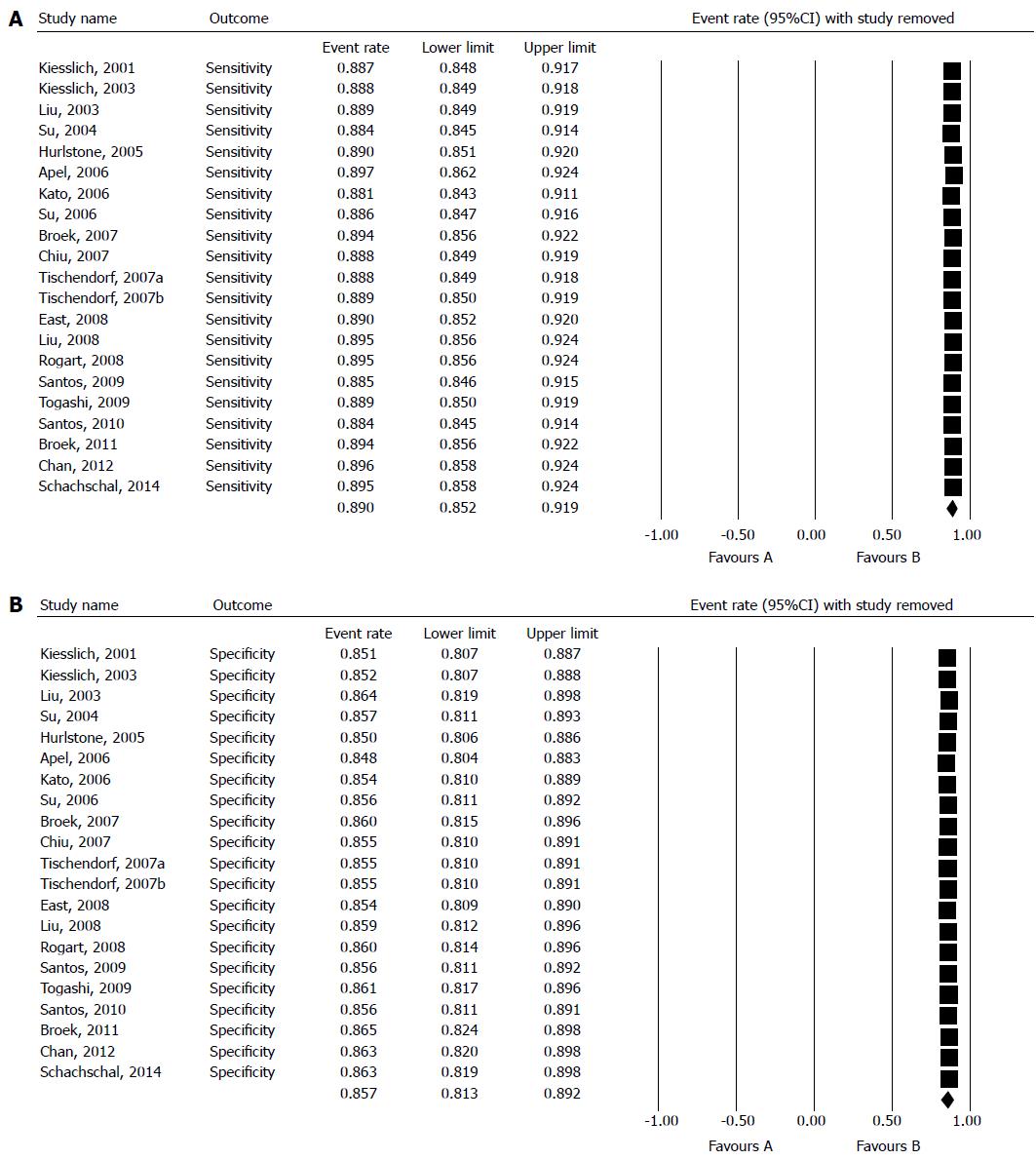 Figure 5 Forest plot omitting one study each time to determine sensitivity (A) and specificity (B). The pooled result was not significantly affected by any of the individual studies, suggesting that the pooled results were stable.
DISCUSSION

The goal of colonoscopy is the early diagnosis of malignant and premalignant changes in the mucosa[29]. Magnifying endoscopy was invented in the 1990s to visualize the fine details of the mucosa[30]. Currently, there are two ways in which magnifying endoscopy is used in practice: Magnifying chromoendoscopy, where indigo carmine was originally used to delineate the mucosa pattern[17,30], and magnifying virtual chromoendoscopy, where a NBI is used to enhance the mucosa pattern[4]. Both modalities frequently use Kudo’s classification as the diagnostic criteria to diagnose neoplasia. The present study suggests that Type I (roundish pits) and Type II (stellar or papillary pits) represent hyperplastic or inflammation polyps and Type III to V represent neoplastic polyps with a high sensitivity and specificity. This provided the basis for real-time decisions during ongoing colonoscopy. During real-time diagnosis, endoscopists can use the recognize-and-discharge strategy thus preventing unnecessary biopsy and pathological costs.

Besides the Kudo’s pit pattern system, there are other endoscopic diagnostic criteria for the classification and staging of lesions: Sano’s capillary pattern which shows the relationship between capillary thickness and lesions, where invisible capillaries are more common in hyperplastic polyps, thin capillaries are more common in low-grade adenomas and thick capillaries are present in neoplastic lesions[16]. The vascular pattern intensity (VPI) is also used, where strong VPI indicates neoplasia and normal or weak VPI indicates non-neoplastic polyp. Combining the pit pattern and VPI may improve the diagnostic yield in the prediction of dysplasia[24].

The present study has several limitations: First, publication bias was statistically significant in the included studies. Thus, it remains a challenge to evaluate Kudo’s pit pattern classification in a comprehensive and unbiased manner. The diagnostic yield of Kudo’s pit pattern was not stratified by polyp size. A previous report documented that larger polyps were associated with a higher risk of neoplasia[31]. Furthermore, the learning curve, the extra time needed, and diagnostic performance in combination with other imaging modalities (such as the i-Scan system) require further investigation.

In conclusion, current evidence indicates that Kudo’s pit pattern classification is a highly accurate method for differentiating between non-neoplastic and neoplastic polyps. Publication bias is significant in the current available literature.

Magnifying endoscopy is a technique which permits the visualization of mucosal details that cannot be seen with standard endoscopy. The aim of this study was to meta-analyze the currently available evidence on Kudo’s pit pattern classification for diagnosing colorectal neoplasms.

The early detection and removal of precancerous lesions plays a critical role in the prevention of gastrointestinal cancer death. Magnifying endoscopy may benefit patients by supporting real-time decisions and saving unnecessary biopsies.