A 77-year-old man with inflammatory bowel disease (IBD) and who was treated with anti-tumor necrosis factor (TNF), 6-mercaptopurine and corticosteroids, presented with primary effusion lymphoma-like lymphoma (PEL-like lymphoma) with massive ascites. The patient’s clinical course was complicated by acute renal insufficiency and hypotension, which led to death within 2 wk. In general, patients with IBD may have an increased risk for development of lymphoma, which is frequently associated with immunosuppressive and/or anti-TNF antibody therapies. PEL is a rare subset of lymphoma localized to serous body cavities, lacks tumor mass or nodal involvement, and is associated with infection by human herpes virus 8 (HHV-8). Primary neoplastic effusion may also be present in patients with large B-cell lymphoma without evidence of human immunodeficiency virus or HHV-8 infections. This type of lymphoma is classified as PEL-like lymphoma. Both PEL and PEL-like lymphoma types have been reported in patients undergoing immunosuppressive therapy, but to the best of our knowledge, the case described herein represents the first PEL-like lymphoma occurring in a patient with IBD.

Primary effusion lymphoma (PEL) and PEL-like lymphoma are rare subsets of B cell lymphoma. The infrequent cases described in the literature have involved immunodeficient individuals [including patients positive for human immunodeficiency virus (HIV), who underwent transplant, or were undergoing immunosuppressive treatment][1,2], individuals with concomitant infection [including Epstein-Barr virus (EBV)[2-5] or hepatitis C virus (HCV)][2,4-10], cirrhotic[4,6,11] and elderly[4,6,12] individuals. To date however, no case of these rare lymphomas has involved a patient with inflammatory bowel disease (IBD).

Since its initial description as a distinct clinical entity in 1996[13], PEL has been classified as a subtype of lymphoma and characterized as strongly associated with human herpes virus 8 (HHV-8) infection. In contrast, the PEL-like lymphoma subtype, first described in 2008, appears unrelated to HHV-8 infection[1]. Lymphoma is a recognized complication of IBD, most frequently occurring in the form of diffuse large B cell lymphoma. Yet, according to cohort population studies it is debatable whether IBD patients have an increased risk of lymphoma compared with the general population[14-27]. Thiopurine immunosuppressive therapy alone or in combination with anti-tumor necrosis factor (TNF) antibody has rarely been associated with the development of lymphoma in IBD[18-20,26-33]. In young IBD patients, anti-TNF treatment may be associated with rare forms of T cell lymphoma, such as hepatosplenic lymphoma and natural killer T cell lymphoma[34-37].

A 77-year-old man with a 3-year history of IBD presented with fever (peak at 39.5 °C) and dyspnea. The on-going IBD condition had been originally diagnosed following a sustained bout of severe and frequent bloody diarrhea. The patient’s medical history included ischemic heart disease and mitral valve annuloplasty due to mitral valve thickening with myxomatous changes and significant regurgitation. At the initial admission, the patient’s serum C-reactive protein (CRP) levels were markedly elevated (78 mg/dL) and the hemoglobin level was slightly below the normal range (13.1 g/dL; normal: 13.8-17.2 g/dL). Colonoscopy showed active left-sided colitis and diverticulosis, and the colonoscopic biopsies showed chronic ulcerative colitis.

An initial treatment of 5-aminosalicylate (4 g/d) had been administered, but the patient showed no response and oral corticosteroid therapy was initiated and provided good results. However, steroid dependency was observed. A tuberculin test was normal and serological tests for hepatitis C antibodies and hepatitis B surface antigen were negative. Anti-TNF therapy (infliximab) had then been initiated but produced only a moderate response and was discontinued after the third dose due to an allergic reaction and only a moderate response.

A second colonoscopy performed 1 year after the initial diagnosis and treatment of IBD showed no signs of active endoscopic colitis, although diverticulosis of the left colon and two small sporadic adenomas of the right colon were observed, together with normal terminal ileum. Histopathological analysis of current biopsies taken from the hepatic flexure to the rectum showed chronic inflammation, crypt abscesses, and multinucleated giant cells. Two years after the initial diagnosis of IBD (and 1 year before the most recent admission), treatment with 6-mercaptopurine (6-MP; 50 mg/d) was administered. 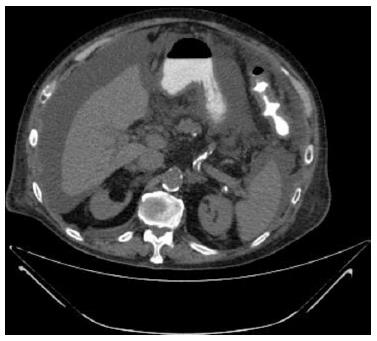 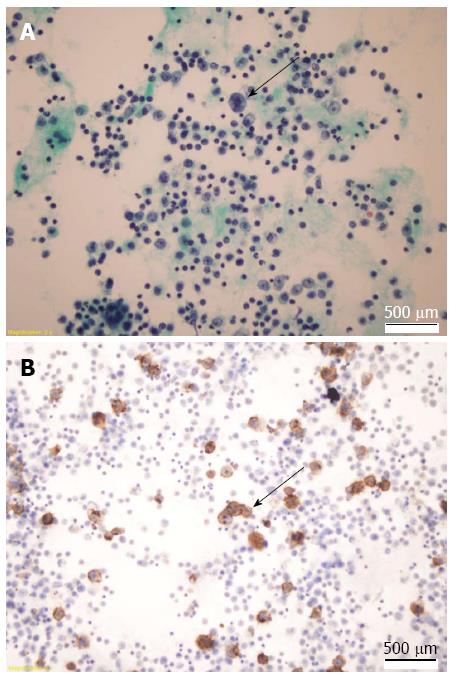 Collectively, these data were consistent with a diagnosis of large B cell lymphoma. After 10 d of admission the patient developed hypotension with acute renal failure, which was attributed to the gentamicin treatment. Despite treatment with intravenous norepinephrine and ascites fluid drainage with intravenous albumin infusion the renal failure became aggravated. The patient underwent hemodialysis but succumbed to the lethal disease course at 14 d after the most recent admission.

PEL is a relatively rare subtype of B cell lymphoma, accounting for approximately 0.3% of non-Hodgkin’s lymphoma in HIV-negative individuals and approximately 4% of non-Hodgkin’s lymphoma in HIV-positive patients. Generally, PEL develops in HHV-8-positive patients and may be associated with HIV infection[40]. It is characterized by the involvement of serous body cavities and presents as pleural, peritoneal, and pericardial effusion with no tumor mass or nodal involvement[2,11]. Its phenotypic characterization includes negative expression of B cell- and T cell-associated antigens (such as the classic B-cell markers CD20 and BCL-2[1,41,42]) and positive expression of activation markers (such as CD30, CD38 and CD71) and epithelial membrane antigen and plasma cell markers (such as CD138)[2,5]. However, immunophenotyping studies have shown that it is represented by a monoclonal B cell population[42].

EBV may also induce B cell proliferation and post-transplantation lymphoproliferative disorder through the EBV-associated protein latent membrane protein-1, which causes cell growth and transformation[45,46]. While EBV-related lymphoma has been described in IBD patients treated with thiopurines[46,47] and the majority of PEL cases in the literature show evidence of EBV infection, the precise role of this virus in PEL oncogenesis remains unclear.

According to the World Health Organization, PEL is only related to HHV-8-positive primary lymphomatous effusion[1]. However, primary neoplastic effusion has also been demonstrated in cases of Burkitt’s lymphoma (CD10-positive) and of large B cell lymphoma (HIV-negative and HHV-8-independent)[1]. In the present case, the lymphomatous effusion cells were found to be devoid of HHV-8 infection and displayed morphological and immunophenotypic features of large B cell lymphoma, consistent with the diagnosis of PEL-like lymphoma[1,41].

The majority of PEL-like lymphoma cases reported in the literature mainly involve elderly or immunocompromised patients[1,2,11,40]. Those cases involving immunocompetent patients show a trend of concomitant HCV or EBV infection (19%-42% of patients)[1,2,5,7-11]. HCV infection may cause PEL-like lymphoma by involvement of the CD81 antigen on the cell surface of B cells, which binds to HCV and triggers polyclonal B cell expansion. Subsequent genetic changes may contribute to the development of B cell lymphoma; for example, overexpression of BCL-2 (an anti-apoptotic factor) and HCV-induced translocation can result in deregulation of PAX5 gene transcription (which encodes the B cell specific antigen)[4,7-10,48]. However, the present case showed no evidence of infection with HCV or EBV.

PEL-like lymphoma accounts for 20% of PEL cases[12]. The definite molecular pathways that underlie the development of malignant lymphomatous effusion in PEL-like lymphoma are still unknown, but are probably similar to those of B cell lymphoma and may include genetic changes such as immunoglobulin and cMYC gene rearrangement (translocations), mutations in the BCL-6 and P53 genes (pro-apoptotic factor)[2,49-51], and trisomy 8[2,4].

The outcome of HIV-negative, HHV-8-unrelated PEL-like lymphoma is better (median survival: 6-10 mo; 1-year survival rate: 35%) than that of HIV-positive PEL (median survival: 4 mo; 1-year survival rate: 17%)[2]. Treatment for PEL includes combination chemotherapy with cyclophosphamide, doxorubicin, vincristine and prednisone, to which adjunctive treatment with rituximab (anti-CD20 antibody) may be added for PEL-like lymphoma to achieve improved outcomes[3,52,53]. Our patient did not receive chemotherapy because he was critically ill with hypotension and renal failure at the time of diagnosis, which was established only a few days before his death.