After Helicobacter pylori (H. pylori) was discovered in 1982, it was considered to be the cause of a large number of peptic ulcers (90%-95% of duodenal and 70%-90% of gastric ulcers)[1]. H. pylori, aspirin, and other non-steroidal anti-inflammatory drugs (NSAIDs) comprise the causes of a large proportion of peptic ulcers. A subsequent rise in global NSAID use and a relative increase in the proportion of NSAID-caused ulcers[2,3] led to wide acceptance that H. pylori infection and NSAID use are the 2 main causes of peptic ulcers[4]. Other causes include Zollinger-Ellison syndrome, Crohn’s disease, and viral infections such as cytomegalovirus and herpes.

However, there have been recent reports of an increase in the proportion of peptic ulcers without these known risk factors; these are termed idiopathic peptic ulcers. By the 1990s, several studies reported that idiopathic ulcers comprised 20%-40% of all peptic ulcers in North America[5-7]. In this region, 20% of H. pylori-positive ulcers recurred after bacterial elimination[8], a markedly higher percentage than that reported in other areas. This finding indicated that a large number of “bystander” cases existed, wherein a patient is positive for H. pylori but the bacteria are not directly involved in causing the ulcer. In the 2000s, increases in the proportion of idiopathic ulcers were also reported in Europe and Asia (Table 1). However, a few studies still report low idiopathic ulcer proportions (4%), including a recent report from Italy[6].

Various methods are used to diagnose H. pylori infection, none of which is 100% accurate alone. Thus, the absence of H. pylori can be determined only when several tests are combined and the results of all are found to be negative[38]. Diagnostic methods that use endoscopic biopsy specimens-histology, culture, and rapid urease tests (RUT)-can show false negatives due to sampling errors caused by non-uniform distribution of H. pylori inside the stomach[39]. Therefore, biopsies must be obtained from several locations. Further, these methods can show false negatives immediately after acute upper digestive tract hemorrhage[40]. In these situations, other diagnostic methods must be used in combination. The urea breath test (UBT) examines urease activity throughout the stomach due to H. pylori, and is used to compensate for sampling errors in tests using biopsy specimens. However, care is needed when using UBT, as false negatives can result when bacterial concentrations decrease during administration of proton pump inhibitors (PPIs)[41], similar to other tests using biopsies. The serum antibody method is not affected by PPI administration or acute upper digestive tract hemorrhage; therefore, it is useful for diagnosing H. pylori infection in these situations. However, this method continues to show positive results for some time after bacterial elimination[42], making it difficult to differentiate between current and past infections. Nevertheless, it is a useful test because it provides a precise diagnosis of idiopathic ulcer (as few false negatives as possible). There are several tests for even more precise diagnosis of H. pylori-negative patients; although these tests do not directly confirm the presence of H. pylori, they eliminate the diagnosis of idiopathic ulcer based on tissue findings associated with infection, such as neutrophil infiltration into the gastric mucosa or atrophy of the gastric mucosa[28,30].

Another important factor in diagnosing idiopathic ulcers is careful elimination of NSAID users. Aspirin and other NSAIDs can be purchased without a doctor’s prescription in many countries. A large number of surreptitious NSAID users likely exist; therefore, patients must be questioned scrupulously about their drug history. Indeed, several previous studies have clarified the existence of surreptitious NSAIDs users. Lanas et al[43] examined patients with gastrointestinal perforation using platelet cyclooxygenase activity in the blood as an objective marker of aspirin usage. They identified 13% more aspirin users with this method than were found through investigation of medical history. Moreover, based on measurements of blood salicylic acid concentrations, Hirschowitz et al[44] reported that 50% of intractable peptic ulcer patients who denied using aspirin were in fact aspirin users. These findings underscore the necessity of carefully eliminating NSAID users when diagnosing idiopathic ulcers. Retrospective studies, which can only determine NSAID usage from past medical records, would be inevitably too lenient in eliminating NSAID users. The result would be a tendency to report higher rates of idiopathic ulcers; therefore, care must be taken when interpreting such data.

A study from Taiwan based on data from 2003-2004 reported an idiopathic ulcer frequency of 8%[32]. Another report based on 2007-2008 data reported a 17% frequency[34], indicating that the proportion of idiopathic ulcers has been rising in recent years. The cause of this trend is also thought to be a decline in H. pylori infection rates in Taiwan[33].

A study of 1999-2000 patient data from Pakistan reported that 29% of ulcers were idiopathic[27]. Although this developing country was thought to have a high H. pylori infection rate at the time[51], the study reported a large proportion of idiopathic ulcers. However, problems with the methods used to diagnose H. pylori infection and issues with the retrospective study design, which did not allow a precise idiopathic ulcer diagnosis, possibly led to this apparently high proportion.

Patient data from India from 2008-2009 showed an extremely high proportion of idiopathic ulcers at 37%[33], on par with rates in North America. This study diagnosed H. pylori using RUT and UBT, thus having a certain level of precision. Although the H. pylori infection rates in India have traditionally been high[53,54], recent studies have reported a decline in infection rates[55], and the high frequency of idiopathic ulcers may be a reflection of this. However, since this study involved only a single institution and a relatively small number of ulcer patients, further investigation is needed.

Although a clear cause of idiopathic ulcers hasn’t yet to be shown, several factors related to the condition have been proposed.

Numerous studies in Europe, the United States, and Asia have shown that idiopathic ulcer patients are significantly older than those with simple H. pylori ulcers or H. pylori/NSAID ulcers[11,23,24,28,29,56], although older age may be a mere confounder of the following risk factors such as systemic complications or psychological stress. Aging has been shown to be accompanied by a decline in the defense functions of the gastric mucosa owing to a variety of mechanisms, particularly a lower prostaglandin concentration in the gastric mucosa as a person ages[57], which may be a potential cause for gastric ulcers but not for duodenal ulcers. Prostaglandin plays a central role in the gastric mucosa defense structure by increasing gastric mucus secretions, bicarbonate secretions, and blood flow[58]. Thus, the diminished prostaglandin concentration in elderly individuals renders the gastric mucosa more fragile, creating an environment in which ulcers are more likely to occur.

Many studies, primarily from Asia, have reported that a wide variety[22,24,26,29] of serious[35] systemic complications are risk factors for idiopathic ulcers. This finding is possibly related to reports stating that peptic ulcers that occur in intensive care units or against a background of serious underlying disease are unrelated to H. pylori infection[59,60]. Physical or psychological (see below) stress caused by an underlying disease might be related to ulcer incidence.

A link between psychological stress and peptic ulcers has long been suggested[65], but once H. pylori infection and damage from NSAID use were identified as the 2 main causes of peptic ulcers, it became unclear whether psychological stress should be considered an independent cause of peptic ulcer[4,21]. However, there have been reports of ulcer formation in the victims of the Great East Japan Earthquake that struck in 2011[67,68]. Kanno et al[67] compared the ulcer incidence 3 mo after the disaster with the ulcer incidence in the same period during the previous year; they found a 1.5-fold rise in ulcer cases after the disaster. Further, the proportion of H. pylori- and NSAID-negative (that is, idiopathic) ulcers rose significantly from 13% in 2010 to 24% after the disaster in 2011 (Figure 1)[67]. This study excluded cases complicated by severe trauma due to the disaster, showing indirectly that psychological stress can be an independent cause of peptic ulcers among disaster victims. Interestingly, the H. pylori-, NSAID-negative ulcers that arose after the disaster were in patients who were significantly older than those with other ulcer types[67]; this finding is consistent with the characteristic of idiopathic ulcers described above. 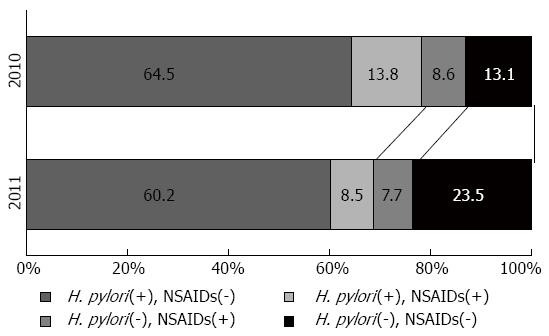 Figure 1 Changing pattern of the etiology of peptic ulcers before (2010) and after (2011) the Great East Japan earthquake. In the analysis of etiologic factors of the ulcers, cases from each year were classified into four groups according to the Helicobacter pylori (H. pylori) status and non-steroidal anti-inflammatory drugs (NSAIDs) intake. The proportion of H. pylori-negative non-NSAIDs takers among PU patients after the earthquake (2011) was significantly higher than in the previous year (13% in 2010 vs 24% in 2011, P < 0.05). The date available from reference[67].
MANAGEMENT OF IDIOPATHIC ULCERS

Bacterial elimination therapy is often effective for preventing the recurrence of H. pylori-positive ulcers and does not require subsequent maintenance therapy with acid-suppressive agents[4]. In NSAID-induced ulcers, changing therapy to COX-2-selective NSAIDs or other alternative medications that do not cause as much damage to the gastrointestinal mucosa can be expected to suppress recurrences[4]. However, for idiopathic ulcers, although acid-suppressive agents can produce temporary relief, they are not an effective preventative measure against recurrence. It has been shown that recurrence rates are high when patients remain unmedicated after such temporary cures. A study from Denmark observed 32 unmedicated patients with H. pylori-negative duodenal ulcers for 2 years, and reported a 35% recurrence rate[12]. Additionally, a prospective study from Hong Kong that observed unmedicated patients with idiopathic, hemorrhagic gastroduodenal ulcers for 7 years found that 42% experienced a relapse of ulcer hemorrhage. This is 4 times the percentage found while observing patients with H. pylori-positive ulcers who were unmedicated after bacterial elimination[69]. Further, a recent report from South Korea found that compared to H. pylori-positive ulcers and NSAID-induced ulcers, idiopathic ulcers showed more recurrences, which led to increased medical costs[36].

Although it has been shown that recurrences can easily occur when patients with idiopathic ulcer are not treated, there is no consensus on whether maintenance therapy with acid-suppressive agents can effectively prevent these recurrences. In the aforementioned study from Denmark, PPI administration was found to have an effect on preventing the recurrence of H. pylori-negative duodenal ulcers[12]. However, a recent major follow-up study from Hong Kong that examined 663 patients with idiopathic hemorrhagic gastroduodenal ulcers did not find H2-blocker or PPI administration to be effective in preventing ulcer hemorrhage relapse[35]. Around 50% of the cases in the Hong Kong study were gastric ulcers[35], and it was found that gastric ulcers, even idiopathic cases, might show different reactivity to acid-suppressive agents than duodenal ulcers. Until it is determined which medications can effectively prevent the recurrence of idiopathic ulcers, the most realistic choice appears to be continuous PPI therapy.