Ghrelin, the ligand of growth hormone secretagogue receptor 1a, takes part in several functions of the digestive system, including regulation of appetite, energy homeostasis, gastric acid secretion and motility. Ghrelin has also immunoregulatory properties and is supposed to inhibit some inflammatory pathways that can mediate gastric damage. Interestingly, ghrelin synthesis is reduced in the gastric mucosa of patients with Helicobacter pylori (H. pylori) infection, a worldwide condition inducing a T helper (Th)1/Th17 cell response-driven gastritis, which may evolve towards gastric atrophy and cancer. In this article, we review the available data on the expression of ghrelin in H. pylori infection and discuss how the defective ghrelin synthesis may contribute to sustain the ongoing inflammatory response in this disease.

GHRELIN, A HORMONE WITH IMMUNOREGULATORY FUNCTIONS

Initially described as a ligand of growth hormone secretagogue receptor 1a (GHS-R1a) expressed by growth hormone-secreting pituitary cells[1], ghrelin is a potent stimulator of growth hormone secretion[2]. Ghrelin is largely produced in the alimentary tract, mainly in the stomach, by gastric X/A-like endocrine cells in rodents and fundic P/D1 cells in humans, while its synthesis gradually diminishes from duodenum to the colon[3]. The large synthesis of ghrelin and expression of GHS-R in the stomach and in other organs and tissues suggested additional effects other than stimulation of growth hormone in the pituitary. Indeed, it is now known that ghrelin takes part in several functions (Figure 1), including the regulation of appetite and energy homeostasis, which could favour adiposity and obesity[4-6]. Ghrelin is also produced in pancreas, lung, kidney, testis, placenta and by immune cells[7]. Ghrelin circulates in two major forms, acyl and desacyl ghrelin[8]. Acyl ghrelin has an octanoyl group essential to activate GHS-R1a[9,10-13]. Desacyl ghrelin lacks this octanoyl group and it was early thought to be an inactive form of ghrelin since it does not activate GHS-R1a. Indeed, desacyl ghrelin has been demonstrated to counteract acyl ghrelin and inhibit the stimulation of food intake, gastric and bowel emptying[14,15] and to be involved in several other biological functions (e.g., in the reproductive system, bone metabolism, cardiovascular protection)[16-18]. Ghrelin has been also found to stimulate neurogenesis[19], improve central memory[20], influence sleep-wake cycle[21]. 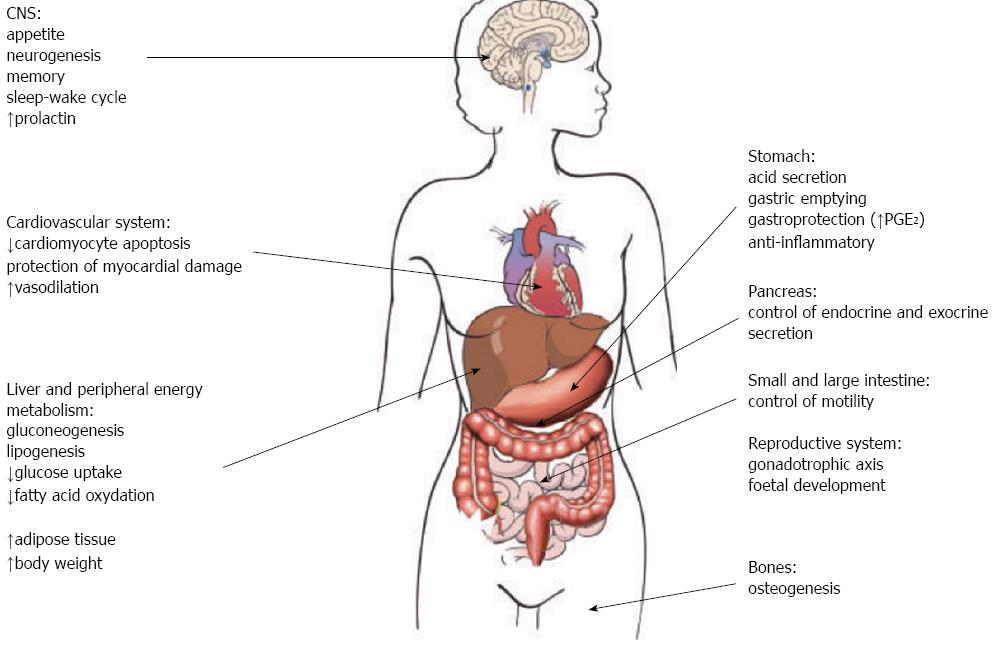 Acylation of ghrelin is mediated by ghrelin-O-acyltransferase (GOAT) in both mice and humans[22,23], an enzyme expressed by several tissues, including the stomach and pancreas[15]. Although GOAT expression is high in the stomach, a direct quantitative correlation with the expression of ghrelin mRNA has not been demonstrated[24]. GOAT is also present in the plasma and varies in relationship with the fasting or feeding status[25]. As acylated ghrelin has a short in vivo half-life (about 9-13 min)[26], desacyl ghrelin accounts for > 90% of the circulating ghrelin[8] with a ratio of acyl/desacyl ghrelin varying from 1:15 to 1:55[8,27].

Besides physiologic activities, ghrelin exerts a gastro-protective effect during pathological conditions. Indeed, in vivo in rats administration of ghrelin attenuates the gastric mucosal lesions induced by detrimental agents, such as ethanol and indomethacin, through an increase of mucosal generation of prostaglandins prostaglandin E2 (PGE2)[28,29]. Ghrelin is also an important regulator of NOS and cyclooxygenase (COX) enzyme systems[1,30-33]. Moreover, studies in different animal models revealed that ghrelin reduces the release of pro-inflammatory cytokines, such as interleukin (IL)-1β, TNF-α, IL-6[34-37] and stimulates the expression of the anti-inflammatory cytokine IL-10[38,39] by T lymphocytes and macrophages in different mechanical or chemical-induced inflammatory conditions. Treatment of human T lymphocytes and monocytes with exogenous ghrelin inhibits the release of pro-inflammatory cytokines such as IL-1β, TNF-α and IL-6[40,41].

Altogether these data underline the gastroprotective functions and the anti-inflammatory role of ghrelin.

Helicobacter pylori (H. pylori) is a Gram negative microorganism, which colonizes the stomach and causes a chronic gastritis, with the downstream effect of promoting peptic ulcer and cancer[42]. H. pylori-related gastritis may progress to atrophy with loss of pyloric and oxyntic glands which, in turn, may negatively affect secretory functions in the stomach. This gastritis related-damage may interfere with ghrelin expression through a loss of P/D1 cells in the fundus and body of the stomach. On the other hand, H. pylori could directly act on mechanisms controlling ghrelin production through the release of cytotoxins, lipopolysaccharide (LPS) and other noxious agents[43]. Indeed, ghrelin expression is reduced in gastric biopsies of H. pylori uninfected subjects following a 24 h incubation with H. pylori-derived culture broth[44]. This evidence is in keeping with the observation[45] that LPS originating from Gram negative bacteria wall, such as H. pylori, intraperitoneally administered in rats reduces plasma ghrelin levels during the first three hours post-injection, probably through an interleukin-1-stimulated release of prostacyclin, which acts directly on PGI2 receptor-expressing ghrelin-producing cells of the gastric oxyntic mucosa.

Many researchers compared circulating values of ghrelin in infected and non-infected patients with inconsistent results. The majority of these studies[46-66] found lower levels of circulating ghrelin in H. pylori positive subjects in Asia and Europe but not in United States. Conflicting results were also obtained when the effect of H. pylori eradication on ghrelin plasma levels was evaluated[46,56-58,67-72]. A metanalysis by Nweneka and Prentice concluded that circulating ghrelin is significantly lower in H. pylori-positive than negative subjects but H. pylori eradication does not significantly modify plasma ghrelin levels[73]. Several factors could explain discrepancy in the results, such as gender[53,74], age[75,76], gastric-related diseases (higher levels in gastritis and peptic ulcer[77] than in gastric cancer[78]), H. pylori strain differences (different expression of cytotoxyns)[43], extent and severity of gastritis (presence or not of atrophy)[60,79,80] and different immunoassays used to measure ghrelin.

Ghrelin expression in the stomach was also assessed by quantification of the gastric ghrelin peptide content or ghrelin mRNA expression in endoscopic biopsies[44,51,52,58,59,62,65,70,71,80-83]. In all studies but three[51,59,65] lower amounts of ghrelin peptide were found in H. pylori infected in respect to non-infected subjects. In contrast to circulating ghrelin, ghrelin mRNA[61,71] and ghrelin immunoreactive cells[83] increased after H. pylori eradication.

IMPACT OF GHRELIN DOWN-REGULATION ON THE GASTRIC INFLAMMATORY RESPONSE TO H. PYLORI

The mechanisms by which H. pylori drives the tissue damaging inflammatory response in the stomach have been largely investigated. It is known that the response to H. pylori infection and the variable mucosal damage are probably influenced by bacterial and host factors[89,90]. Gastric epithelial cells infected by H. pylori exhibit hyperactivation of nuclear factor κB (NF-κB) and produce elevated levels of chemokines, such as IL-8, which contribute to recruit neutrophils into the inflamed tissue[91,92]. H. pylori-driven gastritis is associated with a strong activation of T helper (Th)-type 1 cells, which release large amounts of interferon (IFN)-γ[93,94] and express high T-bet, a Th1-inducing transcription factor[95]. Consistently, H. pylori-infected biopsies contain elevated levels of IL-12, the main Th1 inducing factor in human beings[96]. The large release of INF-γ leads to several inflammatory responses, including the induction of Smad7[97], a strong inhibitor of transforming growth factor (TGF)-β1 activity[98,99]. The defective TGF-β1 activity documented in H. pylori-infected biopsies fits with the demonstration that loss of TGF-β1 in mice associates with a severe gastric inflammation and mucosal damage[100]. Restoring TGF-β1/Smad3 activity with a specific SMAD7 antisense oligonucleotide markedly inhibits Th1 inflammatory cytokine response[97], thus highlighting the importance of the impaired TGF-β1 activity in maintaining the H. pylori-driven pathological response. Recently, H. pylori-associated gastritis has been demonstrated to be characterised by elevated levels of another subset of Th cells, termed Th17 and producing IL-17A, IL-17F, IL-21, IL-22 and IL-26[101-105]. Collectively these data, together with the demonstration that both Th1 and Th17 cells can be pathogenic in mice infected with Helicobacter species, suggest that H. pylori infection may elicit Th1- and Th17-cell immune response in the gastric mucosa thereby contributing to amplify the ongoing mucosal inflammation and favouring the development of gastric lesions. How H. pylori infection induces Th1 and TH17 cell response is not, however, fully understood. It is possible that factors released by H. pylori stimulate macrophages and dendritic cells which, in turn, produce factors driving Th1 and Th17 responses. This is supported by the evidence that the H. pylori neutrophil-activating protein (H. pylori-NAP) is able in vitro to stimulate IL-12 production via agonistic interaction with toll-like receptor 2 and promote Th1 cell polarization[105]. H. pylori-NAP enhances also IL-23, a cytokine involved in the expansion/maintenance of Th17 cell responses. H. pylori infection may also down-regulate factors involved in the negative regulation of Th1 and Th17 cell responses.

The H. pylori-related impairment of ghrelin synthesis in the stomach could represent another step in the damaging process caused by the microorganism (Figure 2). We have recently shown that treatment of H. pylori-infected human gastric biopsies and lamina propria mononuclear cells isolated from H. pylori-colonized gastric biopsies with exogenous ghrelin down-regulated the expression of IFN-γ and IL-12[44]. In contrast, no change in IL-4 was seen following ghrelin treatment, thus indicating that action of ghrelin is confined to Th1 cell immune response. These finding are in line with previous studies showing that ghrelin counteracts other H. pylori-induced pathogenic signals, such apoptosis of gastric epithelial cells[33] and activation of important transcription factors, such NF-κB and MAP kinases[106]. 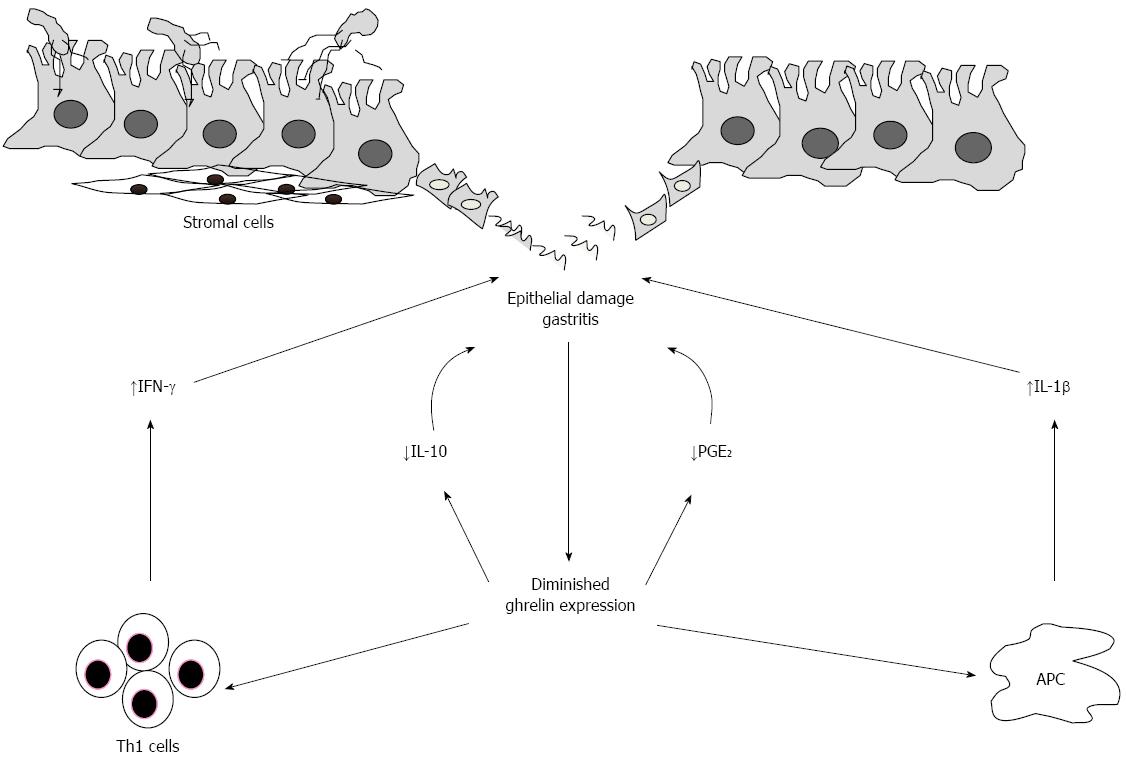 Figure 2 Downregulation of ghrelin expression in the stomach during Helicobacter pylori infection. Epithelial damage and gastritis induced by Helicobacter pylori determine a diminished expression of ghrelin which, in turn, sustains the ongoing T helper (Th) 1 cells response. Down regulation of ghrelin is also followed by a reduced release of Prostaglandin E2 (PGE2) and interleukin (IL)-10 which, together with pro-inflammatory factors as IL-1β, contribute to the detrimental immune response and damage in the stomach. APC: Antigen presenting cell.

Ghrelin, a hormone with anti-inflammatory and anti-apoptotic properties, is supposed to play an important gastroprotective role. The findings described in this article indicate that H. pylori infection associates with a marked down-regulation of ghrelin synthesis, thus delineating a scenario in which such a defect contributes to sustain the H. pylori-driven pathogenic response. Further experimentation would be, however, necessary to ascertain the basic mechanism underlying the negative regulation of ghrelin synthesis by H. pylori as well as to evaluate whether there are inflammatory pathways which rely strongly on ghrelin down-regulation. Studies are also needed to determine the contribution of the diminished ghrelin production in the evolution of H. pylori-associated pathology, as ghrelin can increase the production of PGE2, a protective factor for the gastric mucosa, which has been also implicated in the pathogenesis of cancer[80,109].