Spontaneous splenorenal shunts in the absence of cirrhosis have rarely been reported as a cause hyperammonemia with encephalopathy. Several closure techniques of such lesions have been described. Here we report a case of a patient with no history of liver disease who developed significant confusion. After an extensive workup, he was found to have hyperammonemia and encephalopathy due to formation of a spontaneous splenorenal shunt. There was no evidence of cirrhosis on biopsy or imaging and no portal hypertension when directly measured. The shunt was 18 mm and too large for embolization so the segment of the splenic vein between the portal vein and the shunt was occluded using an Amplatzer plug. Thus, the superior mesenteric flow was directed entirely to the liver. After interventional radiology closure of the shunt using this technique there was complete resolution of symptoms. The case represents the first report of a successful closure of splenorenal shunt via percutaneous embolization of the splenic vein with an amplatzer plug using a common femoral vein approach.

Core tip: This is the first reported case of non-portal hypertension associated hepatic encephalopathy related to a large splenorenal shunt that was successfully closed percutaneously with an Amplatzer plug applied to the splenic vein.

Splenorenal shunts are a rare cause of hyperammonemia and encephalopathy in the absence of cirrhosis[1]. This vascular phenomenon has mostly been reported in patients with cirrhosis and is thought to be due to elevations in levels of angiogenic factors[2]. Most reported cases of splenorenal shunts have been treated with either surgery or, rarely, percutaneous transhepatic embolization[1,3]. This case represents the first report of the successful closure of a spleno-renal shunt via percutaneous embolization of the splenic vein with an Amplatzer plug.

A 58-year-old man with a history of gastric bypass surgery presented to the Veterans Affairs Medical Center with 4 mo of confusion. The confusion was described as episodic, worst in the mornings, and lasting up to 24-48 h. The episodes were severe and associated with violent behavior, resulting in the loss of his job. His initial workup at another hospital was significant only for hyperammonemia, so he was prescribed lactulose and rifaximin. He reported 4 bowel movements per day on this regimen, but despite adherence he continued to have episodes of confusion with 5 hospitalizations in 3 mo.

His past medical history was notable for obesity for which he underwent Roux-en-Y gastric bypass in 2006 with weight decrease from 356 to 180 pounds. He had been recently diagnosed with schizoaffective disorder and panic disorder due to his episodes of confusion. He also had diet-controlled diabetes, and hypothyroidism. He had undergone a cholecystectomy, panniculectomy, and mastopexy. He took no over-the-counter medications or herbal medications and had no known drug allergies. He lived with his wife and had 4 children. He had no history of alcohol, tobacco, or drug use. He had no history of travel, tattoos, or prior transfusions. His family history was notable for a mother with obesity and diabetes but no hepatic, gastrointestinal, or psychiatric illnesses.

On physical exam he was afebrile with a heart rate of 80 beats per minute, blood pressure of 110/75 mmHg, respiratory rate of 16 breaths per minute, and oxygen saturation of 100% on room air. He weighed 180 pounds and stood 5 foot 11 inches tall, giving him a body mass index of 25. His exam was notable for a calm demeanor, normal cardiopulmonary exam, and abdomen without hepatosplenomegaly, tenderness, distention, caput medusae, or dullness at the flanks. He had no peripheral edema. He was alert and oriented to person, place, date, and situation and had no asterixis. His skin exam was without spider angiomata or palmar erythema.

His brain MRI did not demonstrate any intracranial abnormalities. An EEG during one episode demonstrated diffuse generalized slowing suggestive of minimal encephalopathy. A liver biopsy demonstrated no abnormalities. CT of his abdomen demonstrated a normal appearing liver and a large splenorenal shunt adjacent to clips from the prior abdominal surgery. There was no radiographic evidence of portal hypertension. An upper endoscopy revealed no gastric or esophageal varices and no portal hypertensive gastropathy. 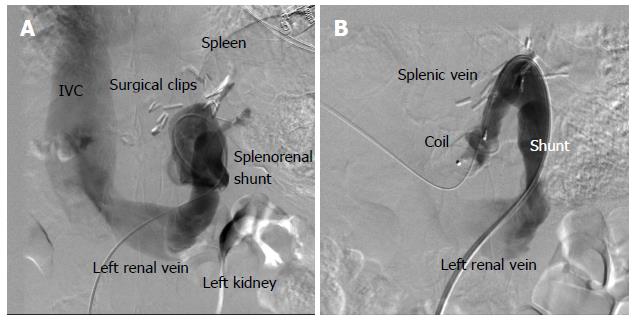 Figure 1 Angiographic images of the splenorenal shunt before (panel A) and after (panel B) intervention. 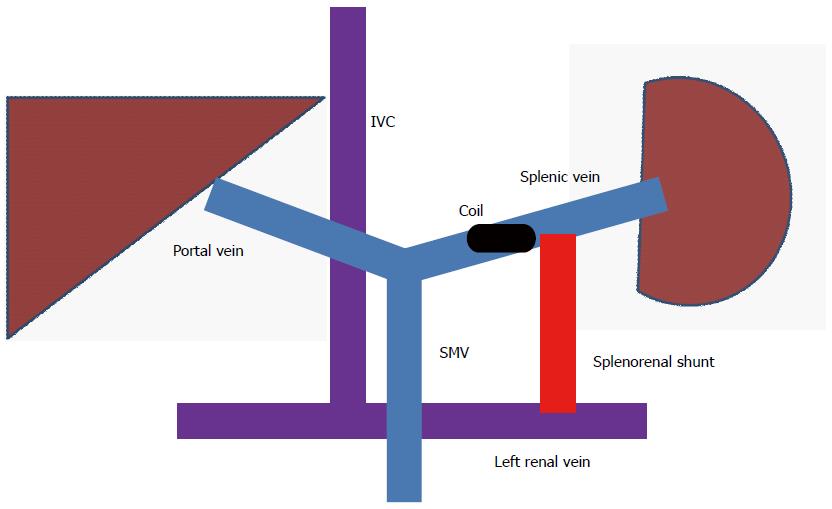 This is a case of a 58 year old non-cirrhotic man who developed severe confusion and hyperammonemia in the setting of a spontaneous splenorenal shunt. This was successfully treated with using percutaneous closure with an Amplatzer plug via femoral approach in a non-cirrhotic patient. This case is novel in that it presents a novel therapy for a debilitating problem.

The pressure gradient between the right atrium and portal vein was minimal indicating that portal hypertension was not a factor in this case. This was also confirmed by the non-cirrhotic liver biopsy and lack of evidence of portal hypertension on imaging, endoscopy, or physical exam. The large size of the splenorenal shunt (18 mm) would require a large (e.g., 26 mm) closure device which is not commercially available. This type of device would carry a high risk of embolization into the pulmonary circulation if a smaller size was used. The segment of splenic vein between the portal vein and the shunt was only 12 mm. This segment was thus easier and safer to occlude. Occlusion with a 20 mm plug allowed SMV flow to be directed entirely towards the liver. The splenic vein flow was directed into systemic circulation via a more distal spleno-renal shunt but this was not clinically significant.

One interesting aspect of this case is the close proximity of the splenorenal shunt to the site of gastric bypass clips. The gastric bypass surgery was standard and there were no vascular complications. The splenorenal shunt was located in a common site and there is no reason to believe there was a mechanical cause (e.g., inadvertent clamp injury) to cause the formation of the shunt. However, gastric bypass has been rarely associated with subsequent development of hyperammonemic encephalopathy. A 2008 case series found several women with no history of liver disease who presented with mental status changes 0.3-28 years after Roux-en-Y gastric bypass[4]. All patients died despite agressive treatment and the authors hypothesized that hyperinsulinemia and zinc deficiency post-bypass decreased expression and function of ornithine transcarbamoylase (OTC), unmasking partial previously clinically silent X-linked OTC deficiencies. Another published link between gastric bypass and hyperammonemia is carnitine deficiency[5].

Only a few cases of splenorenal shunts have been reported in the absence of chronic liver disease[2,6]. One group in Japan did a nation-wide search for non-cirrhotic portal-systemic encephalopathy[1]. They found 47 cases, and five types of portosystemic shunts were identified in patients with no history of liver disease: intrahepatic, intra- to extra-hepatic, extrahepatic, extrahepatic with idiopathic portal hypertension, and congenitally absent portal vein. In this case series, 23 patients (49%) developed extrahepatic shunts such as the splenorenal shunt described here. These shunts were either clinically silent or presented insidiously as psychiatric disease, as in the case of our patient. Precipitants of encephalopathic episodes were described as similar to traditional hepatic encephalopathy and an increased incidence with age was attributed to increased ammonia sensitivity and decreased liver function associated with aging.

Treatment of splenorenal shunts has included a variety of modalities including closure with a metal coil, surgical ligation, balloon occluded retrograde transvenous obliteration, and shunt-preserving disconnection of the portal and systemic circulation[1]. Another study in 1997 by Sakurbayashi assessed 7 patients with cirrhosis and encephalopathy attributed to spontaneous splenorenal shunts and found coiling to be successful in treating the shunts when technically possible (i.e., not limited by high portal pressures)[3]. They found that a percutaneous transhepatic embolization was effective in 3 of 4 patients and a transrenal in 1 of 3 patients. To our knowledge, percutaneous embolization of the splenic vein with an Amplatzer plug through a transrenal approach in this setting has never been reported. This percutaneous retrograde technique described here thus represents another option for the treatment of splenorenal shunts. Advantages include a minimally invasive approach with minimal potential complications. Successful percutaneous closure of splenorenal shunts using Amplatzer plugs in the splenic vein can be considered a possible alternative to riskier embolization procedures in patients with large shunts and non-cirrhotic livers. Splenorenal shunts are a rare cause of debilitating encephalopathy due to hyperammonemia. This case presents a novel, minimally invasive treatment option for a confusing cause of confusion.

The contents do not represent the views of the Department of Veterans Affairs or the United States Government.

This is a 58-year-old-man with a history of roux-en-Y gastric bypass who presented with severe confusion.

He was found to severely encephalopathic with asterixis and no findings of chronic liver disease.

Laboratory testing demonstrated hyperammonemia that corresponded to his level of confusion.

He was found to have a large splenorenal shunt on computed tomography scan.

A liver biopsy demonstrated that he had no underlying liver disease.

The percutaneous placement of an Amplatzer plug into the splenic vein segment between the main portal vein and the splenorenal shunt, resulting in complete symptom resolution.

A manuscript by Watanabe et al reviews a nation-wide experience with evaluation and treatment of portosystemic shunts in non-cirrhotic patients.

An Amplatzer plug is a permanent occluding, self-expanding, flexible metallic device built with nitinol braids that is an alternative to coils or balloon occlusion.

The case represents the first report of a successful closure of spleno-renal shunt via percutaneous embolization of the splenic vein with an Amplatzer plug using a common femoral vein approach.

Though the presence of a spontaneous splenorenal shunt is not novel in and of itself, this case illustrates the effectiveness of a novel technique of a minimally-invasive cure for a debilitating condition.