Hepatitis B virus (HBV) chronically infects more than 350 million people worldwide. HBV causes acute and chronic hepatitis, and is one of the major causes of cirrhosis and hepatocellular carcinoma. There exist complex interactions between HBV and the immune system including adaptive and innate immunity. Toll-like receptors (TLRs) and TLR-signaling pathways are important parts of the innate immune response in HBV infections. It is well known that TLR-ligands could suppress HBV replication and that TLRs play important roles in anti-viral defense. Previous immunological studies demonstrated that HBV e antigen (HBeAg) is more efficient at eliciting T-cell tolerance, including production of specific cytokines IL-2 and interferon gamma, than HBV core antigen. HBeAg downregulates cytokine production in hepatocytes by the inhibition of MAPK or NF-κB activation through the interaction with receptor-interacting serine/threonine protein kinase. MicroRNAs (miRNAs) are also able to regulate various biological processes such as the innate immune response. When the expressions of approximately 1000 miRNAs were compared between human hepatoma cells HepG2 and HepG2.2.15, which could produce HBV virion that infects chimpanzees, using real-time RT-PCR, we observed several different expression levels in miRNAs related to TLRs. Although we and others have shown that HBV modulates the host immune response, several of the miRNAs seem to be involved in the TLR signaling pathways. The possibility that alteration of these miRNAs during HBV infection might play a critical role in innate immunity against HBV infection should be considered. This article is intended to comprehensively review the association between HBV and innate immunity, and to discuss the role of miRNAs in the innate immune response to HBV infection.

Core tip: Hepatitis B virus (HBV) is the leading cause of chronic hepatitis, cirrhosis, and hepatocellular carcinoma in the world. HBV could interact with the host’s innate and adaptive immune responses to establish chronic infection. HBV also interacts with Toll-like receptors (TLRs) and TLR signaling pathways, and regulates host immune responses through the regulation of microRNAs (miRNAs) to some extent. This article focuses on the involvement of miRNA in the association between HBV and TLR signaling pathways and reviews the miRNAs involved in HBV infection.

The outcome of HBV infection is the result of complex interactions between HBV and the immune system including adaptive and innate immunity[5,6]. Toll-like receptors (TLRs) are important parts of the innate immune response in hepatitis virus infections[7]. There are several reports about the important role of TLRs and TLR-mediated signaling in the pathogenesis and outcome of HBV infection[2,5-11].

MicroRNA (miRNA) is one of the endogenous noncoding small RNAs, approximately 18-22 nucleotides in size, a post-transcriptional regulator that binds to the 3′-untranslated region (UTR) of the target gene messenger RNA, usually resulting in cleavage or inhibiting translation of the target gene mRNA[12,13]. It is estimated that the human genome may encode over 2000 miRNAs, which may control about 60% of the human genome[14,15]. Physiologically, miRNAs are able to regulate various biological processes such as cell proliferation, differentiation and apoptosis, neuroprocesses, carcinogenesis and immune response[16-18]. This article is intended to comprehensively review the association between HBV and innate immunity, and to discuss the role of miRNAs in the innate immune response to HBV infection.

INNATE IMMUNITY IS IMPORTANT FOR THE ERADICATION OF HBV

Interferons (IFNs) play an important role in the innate immune response to virus infection. IFN-α and IFN-β (type I IFNs) are secreted by almost all virus-infected cells including hepatocytes and by specialized blood lymphocytes. In contrast, the production of IFN-γ (type II IFN) is restricted to cells of the immune system, such as natural killer (NK) cells, macrophages, and T cells. On the other hand, tumor necrosis factor alpha (TNF-α) primarily initiates innate immune response and triggers acquired immune responses[19]. TNF-α-induced apoptosis is important for clearance of hepatocytes infected with HBV and HCV, and IFN-γ accelerates the killing of theses hepatocytes[19,20]. The previous studies demonstrated that TNF-α and IFN-γ downregulate HBV gene expression in the liver of HBV transgenic mice by posttranscriptionally destabilizing the viral mRNA[21-23]. It has been widely believed that the cytotoxic T lymphocyte response clears viral infections by killing infected cells. However, Chisari’s group[21-24] reported that noncytopathic clearance of HBV from hepatocytes by cytokines, which abolish viral replication and HBV gene expression, is another important mechanism. Isogawa et al[24] reported that TLR3, TLR4, TLR5, TLR7 and TLR9 ligands could induce antiviral cytokines and inhibit HBV replication in HBV transgenic mice, thereby indicating TLR activation as a powerful strategy for the treatment of chronic HBV infection. HBV replication can be controlled by innate immune response, involving TLRs, if it is activated in hepatocytes[24]. Together, these facts indicate that innate immunity including TLR signaling plays an important role in the pathogenesis of HBV infection.

TLRs, germline-encoded pattern recognition receptors (PRRs), can play a central role in host cell recognition and response to various pathogens such as viruses[25]. TLR1, TLR2, TLR4, TLR5, and TLR6 are expressed on the cell surface while TLR3, TLR7, TLR8 and TLR9 are expressed within intracellular vesicles. TLR3, TLR7/8 and TLR9 are involved in the recognition of viral nucleotides such as double-stranded RNA, single-stranded RNA and DNA, respectively[26]. Other than TLRs, membrane-bound C-type lectin receptors (CLRs), cytosolic proteins such as NOD-like receptors (NLRs) and RIG-I-like receptors (RLRs), which include retinoic acid-inducible gene I (RIG-I ), melanoma differentiation antigen 5 (MDA5), and lipophosphoglycan biosynthetic protein 2 (LPG2), and unidentified proteins that mediate sensing of cytosolic DNA or retrovirus infection, are also involved in the recognition of pathogen-associated molecular patterns (PAMPs)[25].

TLRs play a crucial role in defending against pathogenic infection through the induction of inflammatory cytokines and type I IFNs by myeloid differentiation primary response 88 (MYD88)-dependent and MYD88-independent pathway. In the MYD88-dependent pathway, MYD88 recruits a set of signal cascades such as MAPK and NF-κB through receptor-interacting serine/threonine protein kinase (RIPK/RIP). In the MYD88-independent pathway, TLR3 activates NF-κB and MAPKs through RIPK. TLR3 also activates IFN regulatory factor 3 (IRF3) and IRF7 via TRIF/TICAM-1, inducing the production of type I IFN. The activated NF-κB and IRFs are translocated to the nucleus. NF-κB and MAPKs initiate the transcription of inflammatory cytokine genes, whereas IRFs initiate the transcription of type I IFN[2]. RIG-I and MDA5 pathways can also activate IRF3 to produce type I IFNs. RNA helicases RIG-I and MDA5, specific receptors for double-stranded RNA, and the downstream mitochondrial effector known as CARDIF/MAVS/VISA/IPS-1, are also major pathways for type I IFN induction.

ASSOCIATION BETWEEN HBV AND TOLL-LIKE RECEPTORS

TLRs have been recognized as playing an important role in the pathogenesis of chronic hepatitis B[8]. NF-κB is activated by three TLR adaptors, MYD88, Toll/interleukin (IL)-1 receptor (TIR)-domain-containing adaptor-inducing IFNβ (TRIF), and IFN promoter stimulator 1 (IPS-1), to elicit anti-HBV response in both HepG2 and Huh7 cells[27]. Down-regulations of TLR7 and TLR9 mRNA were observed in peripheral blood mononuclear cells (PBMC) of HBV-infected patients[28]. Chen et al[29] reported that TLR1, TLR2, TLR4 and TLR6 transcripts were also downregulated in PBMC of chronic hepatitis B patients. After being challenged by TLR2 and TLR4 ligands, cytokine production was impaired in PBMC of chronic hepatitis B patients on the basis of the levels of plasma HBsAg[29]. Xie et al[30] reported that HBV infection results in reduced frequency of circulating plasmacytoid dendritic cells (pDCs) and their functional impairment via inhibiting TLR9 expression. HBV replication suppresses the TLR-stimulated expression of proinflammatory cytokines (TNF, IL6) and the activation of IRF3[31]. It has also been reported that HBV could target RIG-I signaling by HBx-mediated IPS-1 down-regulation, thereby attenuating the antiviral response of the innate immune system[32].

The HBV precore/core region of HBV genome also encodes HBeAg as well as the HBV core. The precore stop codon prevents the formation of precore protein and HBeAg[2,33]. The existence of HBeAg in serum is known to be a marker of a high degree of viral infectivity. In Japan, the major HBV genotypes are B and C, but our previous study[34] revealed that the precore mutation A1896 and the core promoter mutations at nt1762 and 1764 were found more frequently in acute liver failure than in acute hepatitis, and HBV genotype B was predominant in acute liver failure. It has also been shown that acute liver failure occasionally occurs in persons who are negative for HBeAg[35,36]. It is well known that perinatal transmission of HBV occurs in about 10%-20% of HBeAg-negative mothers without prevention of perinatal HBV transmission by combined passive and active immunoprophylaxis, and the babies are at risk of developing fulminant hepatitis[37]. Chronic hepatitis B with high HBV DNA and ant-HBe is associated with a severe and evolutive liver disease[38]. These clinical findings could be assumed to have immune tolerance for HBeAg, although the function of HBV precore or HBeAg is unknown. Previous immunological studies[39-41] demonstrated that HBeAg is more efficient at eliciting T-cell tolerance, including production of its specific cytokines IL-2 and IFN-γ, than HBV core antigen. We also demonstrated that HBeAg expression inhibits IFN and cytokine production[2] and that HBeAg physically associates with RIPK2 and regulates IL-6 gene expression[6]. Visvanathan et al[42] reported that the expression of TLR2 on hepatocytes, Kupffer cells, and peripheral monocytes was significantly reduced in HBeAg-positive chronic hepatitis B patients. Thus, HBV seems to have evolved strategies that block the effector mechanisms induced through IFN and/or cytokine signaling pathways, similar to other viruses[19].

MIRNAS WERE DIFFERENTIALLY EXPRESSED IN HEPG2.2.15 AND HEPG2

HepG2.2.15 cells assemble and secrete HBV virion that infects chimpanzees[43,44]. We examined the expression of approximately 1000 miRNAs in the human hepatoma cells HepG2.2.15 and HepG2 using real-time RT-PCR, the most sensitive technique for mRNA detection and quantification[45,46]. 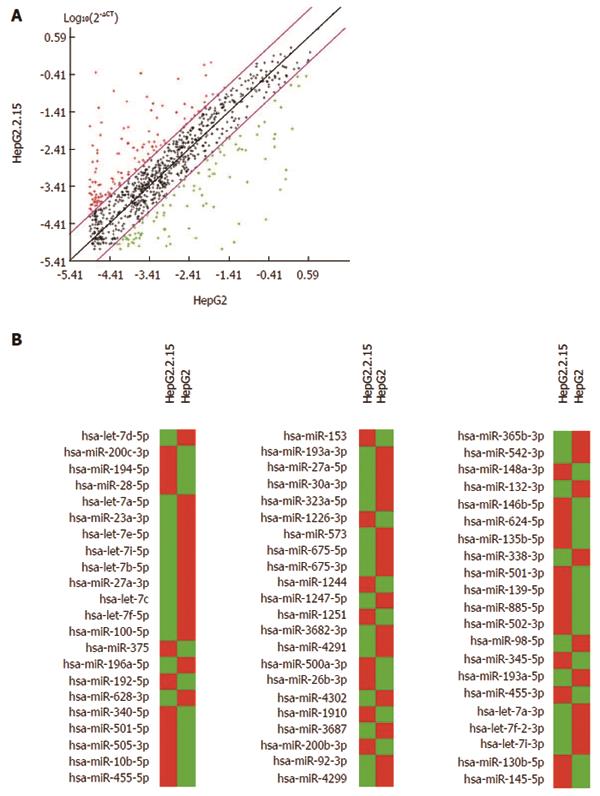 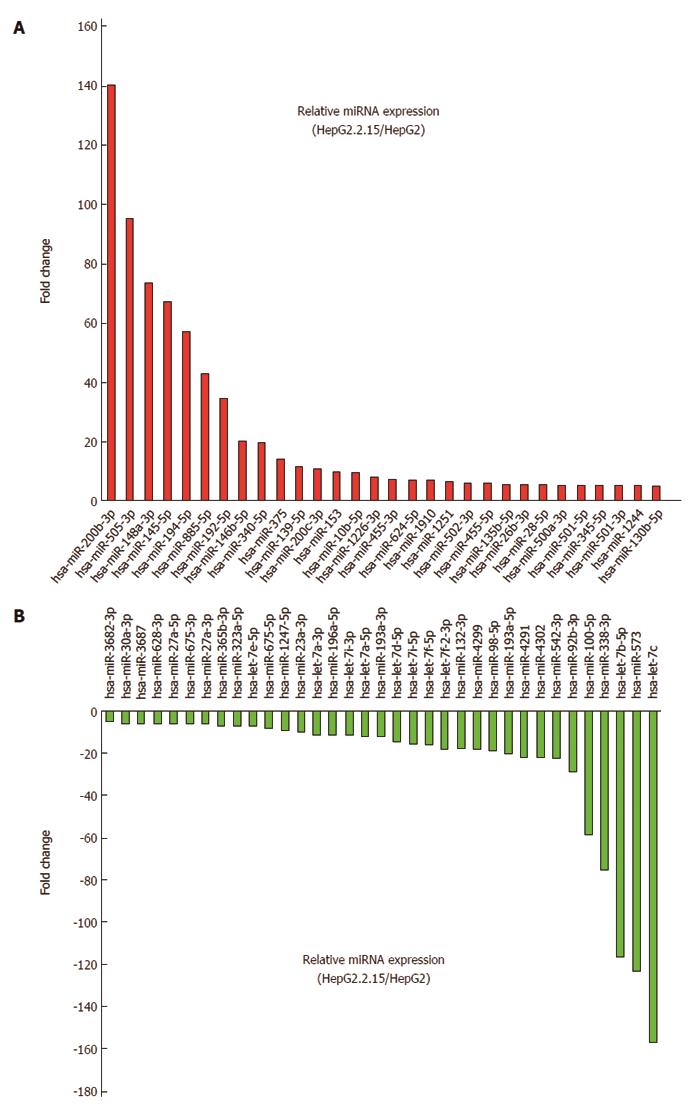 Innate immunity represents the first line of defense against HBV, and we and others have reported its importance in the persistence of HBV infection[2,5-11]. So, we focused on miRNAs related to the TLR pathway. Among miRNAs upregulated 5-fold or more in HepG2.2.15 cells, 7 miRNAs (miR-200b-3p, miR-148a-3p, miR-145-5p, miR-146b-5p, miR-200c-3p, miR-455-3p and miR-455-5p) were reported to be related to TLR pathways (Table 1). MiRNAs miR-200b and miR-200c are the factors that modify the efficiency of TLR4 signaling through MYD88 in HEK293 cells[47]. TLR3, TLR4 and TLR9 agonists upregulated miR-148/152 expression and downregulated calcium/calmodulin-dependent protein kinase II (CaMKII) in dendritic cells (DCs) on maturation[48]. Thus miR-148/152 can act as fine-tuners in regulating the innate response and antigen-presenting capacity of DCs[48]. Exogenous miR-145 promoted IFN-β induction by targeting the suppressor of cytokine signaling 7 (SOCS7), through the nuclear translocation of signal transducer and activator of transcription 3 (STAT3) and SOCS7-silencing enhanced IFN-γ induction by stimulation with TLR3 ligand, poly(I-C)[49]. MiR-146 plays a role in the control of TLR and cytokine signaling through a negative feedback regulation loop involving down-regulation of interleukin (IL)-1 receptor-associated kinase 1 (IRAK1) and tumor necrosis factor (TNF) receptor-associated factor 6 (TRAF6) protein levels[50]. MiR-455 was involved in the TLR4 signaling pathway through E2F1 transcription factor[51].

In the present study, 30 and 35 miRNAs were upregulated and downregulated, respectively, by 5-fold or greater in HepG2.2.15 compared to its parental cell line HepG2. These results indicate that miRNAs could play an important role in chronic persistent HBV infection. Su et al[57] reported that miR-155 enhances innate antiviral immunity through promoting the JAK/STAT signaling pathway by targeting SOCS1, inhibiting HBV replication. The possibility cannot be ruled out that HBV persistently infects hepatocytes through the regulation of miRNAs. 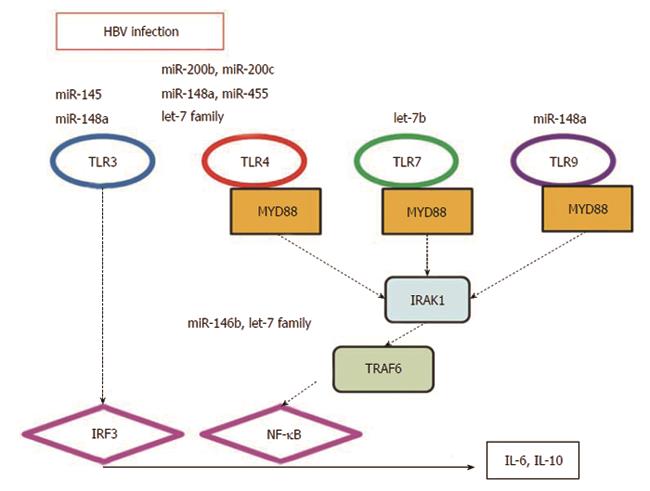