Epithelioid hemangioendothelioma (EH) is a rare tumor arising from the vascular endothelial cells of soft tissue or visceral organs. The most common visceral site is the liver, where it is often involved in a multifocal manner known as hepatic EH (HEH). Surgical resection with curative intent represents the gold standard therapy. When surgery is not feasible, or in cases of metastatic disease, no standard medical treatment is currently indicated. In small series, drugs with anti-angiogenic activity (such as bevacizumab, sorafenib, thalidomide, and lenalidomide) have been proposed with promising results. We describe a 73-year-old man with multifocal non-resectable HEH treated with lenalidomide. Disease status was evaluated by abdominal ultrasound and magnetic resonance every four months. The patient was treated for a total of 39 mo with prolonged disease stabilization and, at the time of writing, is still under treatment with a good tolerance profile. During a short period of treatment discontinuation, the disease showed slight progression that immediately resolved after the reintroduction of lenalidomide. Lenalidomide may represent a valid treatment option for HEH due to its anti-angiogenic and antineoplastic activities. This preliminary result merits further study in a large series.

Core tip: Hepatic epithelioid hemangioendothelioma (HEH) is a rare tumor. Currently, no standard medical treatment is indicated in unresectable disease. We describe the case of a patient with HEH who obtained stable disease after 40 mo of treatment with lenalidomide. Tolerance to treatment was very good. This report highlights the possibility of obtaining very long stable disease with an anti-angiogenesis drug. In recent years, the introduction of angiogenesis inhibitors has offered an interesting medical approach to this rare tumor.

Epithelioid hemangioendothelioma (EH) is a rare tumor that develops from vascular endothelial cells and involves soft tissue and visceral organs. In 1982, the literature first defined EH as a pathologic histotype, and in 1984, the first retrospective study of 34 patients with EH was published[1,2]. The incidence of this rare tumor is less than 1 per million people, and it is more frequent in females than in males, with a median age in the fifties[3-5]. The etiology is unknown[3].

EH can arise in the lung, skin, brain, spleen, heart, stomach, bones, or lymph nodes, but it is in the liver that it is most prevalent[3,4,6]; in such cases, the disease is known as hepatic epithelioid hemangioendothelioma (HEH). HEH metastases are commonly found in the lung, peritoneum, lymph nodes, and bones[3,7,8].

HEH is often asymptomatic, or patients may present with generalized signs and symptoms such as abdominal pain, jaundice, hepatomegaly, raised laboratory parameters of liver function, fatigue, weight loss, anorexia, ascites, and/or emesis[2,3,7]. At diagnosis, HEH can be a single focal disease in about 13% of cases, whereas it involves multifocal disease in the other 87%[3,4,6]. Ultrasound, computed tomography (CT), or magnetic resonance (MR) imaging can be used in diagnosis and treatment follow-up. Definitive diagnosis can only be made with histopathologic biopsy examination or by surgery[3].

Surgery (hepatic resection or orthotopic liver transplantation) would be the initial standard treatment of HEH if the disease is localized[10-13]. This approach could be curative. After surgery, the patient must undergo medical therapy, but in selective cases it is also possible to evaluate liver transplantation despite extrahepatic disease[3,12].

By comparison, a standard medical treatment is not defined for cases ineligible for surgery or where the disease is metastatic[5,6,8]. There are no treatment guidelines or large prospective clinical trials involving patients with HEH. Therapy is selected based on clinical judgment. Therefore, it is very important for patients to be evaluated in a specialized oncology center for HEH diagnosis and treatment.

Percutaneous treatment, radiofrequency or embolization of the hepatic lesion, chemotherapy, radiotherapy, immunotherapy, and hormone therapy have been evaluated[3,8,13]. For some time, fluorouracil, doxorubicin, vincristine, and interferon were used in HEH patients to obtain partial or stable disease[3,14,15].

Vascular endothelial growth factor (VEGF) is commonly expressed on vascular endothelial cells, and drugs with anti-angiogenic activity are proposed for treatment of HEH and EH[8]. Recently, thalidomide, bevacizumab, sorafenib, and metronomic cyclophosphamide have been used in patients affected with HEH or EH, with variable responses being obtained[5,6,8,16-19]. Non-steroidal anti-inflammatory drugs that have an anti-angiogenic effect have also been used alone or in combination with other drugs in the treatment of HEH[20].

The natural course of HEH is not predictable: sometimes the tumor is indolent and stable for several years, whereas in others it is aggressive and rapidly metastatic[8].

Lenalidomide is an antineoplastic drug with anti-proliferative and cytotoxic effects, immunomodulatory properties, and anti-angiogenic activity[21,22]. A few cases of patients with solid tumors treated with lenalidomide, in association with other medical therapies, are described in the literature, but in only one of these cases does the patient have EH[4,23-25]. We describe the case history of an HEH patient demonstrating a long-term durable response to lenalidomide treatment.

In December 2009, a 73-year-old man presented with elevated serum alanine aminotransferase (ALT 56 U/L, normal range < 41), aspartate aminotransferase (AST 41 U/L, normal range < 3), alkaline phosphatase (ALP 380 U/L, normal range 98-280), and gamma-glutamyl transpeptidase (GGT 168 U/L, normal range 8-61). The patient was asymptomatic. Contrast CT, abdominal gadoxetic acid-enhanced dynamic MR imaging (Figure 1A), and contrast-enhanced ultrasound of the liver showed multiple hepatic lesions (Figure 2A). An ultrasound-guided biopsy of one of the hepatic lesions was made. Histologically, the liver tissue was infiltrated by a neoplastic population composed of short strands, cords, and nests of rounded to slightly spindled eosinophilic cells, embedded in a myxohyaline stroma. At immunohistochemistry, tumor cells were CD34 and von Willebrand factor positive, negative for CD21, CD23, smooth muscle actin, epithelial membrane antigen (EMA), and cytokeratins, and showed a low proliferation index/MIB1 (< 5%). According to morphologic and immunohistochemical data, epithelioid hemangioendothelioma was diagnosed (Figure 3). Due to the multiple hepatic lesions, a liver resection was not indicated and, given the patient’s age, a liver transplant was not proposed. The decision was made to treat the patient with 25 mg of lenalidomide daily on 1-21 every 28 d due to its anti-angiogenic properties. The patient started lenalidomide treatment in January 2010 and was treated for 39 mo in total. 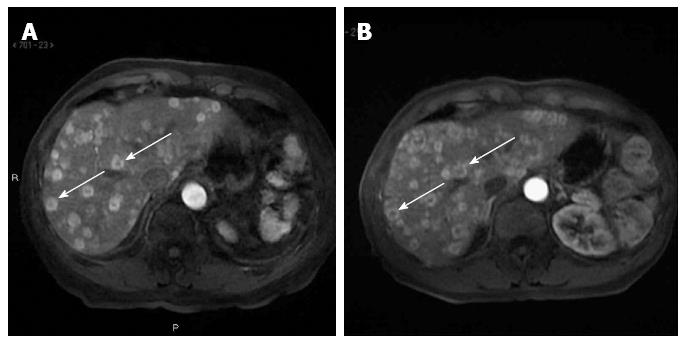 Figure 1 Abdominal magnetic resonance at diagnosis and after ten months of treatment. A: Multiple hepatic lesions with heterogeneous characteristics: central hypodensity and peripheral hyperdensity (arrows); B: Stable disease, with a greater contrast between central and peripheral parts of the lesion as colliquative necrosis (arrows). 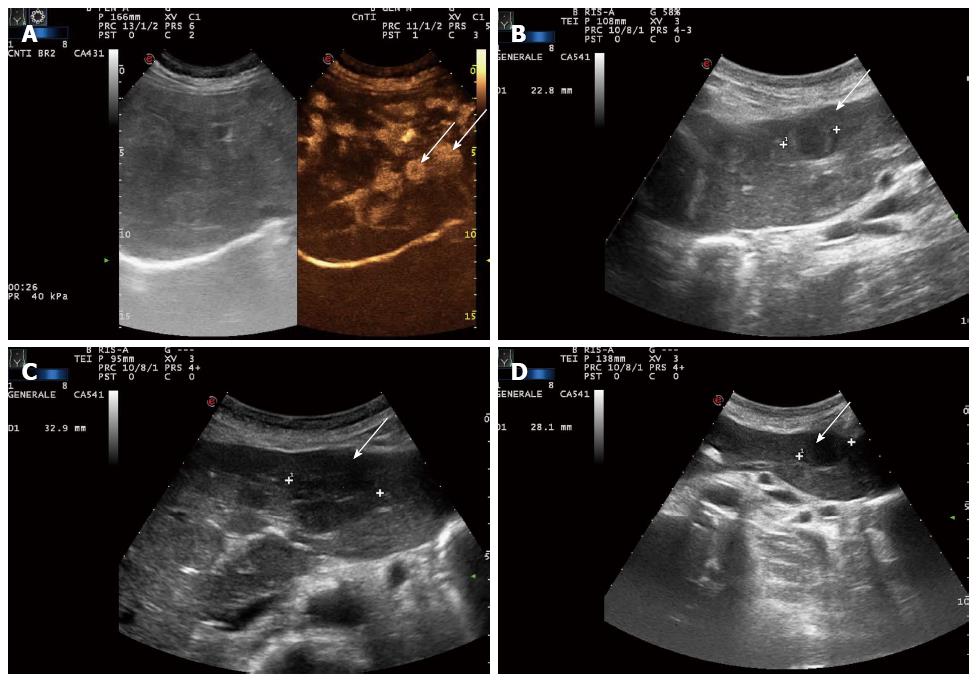 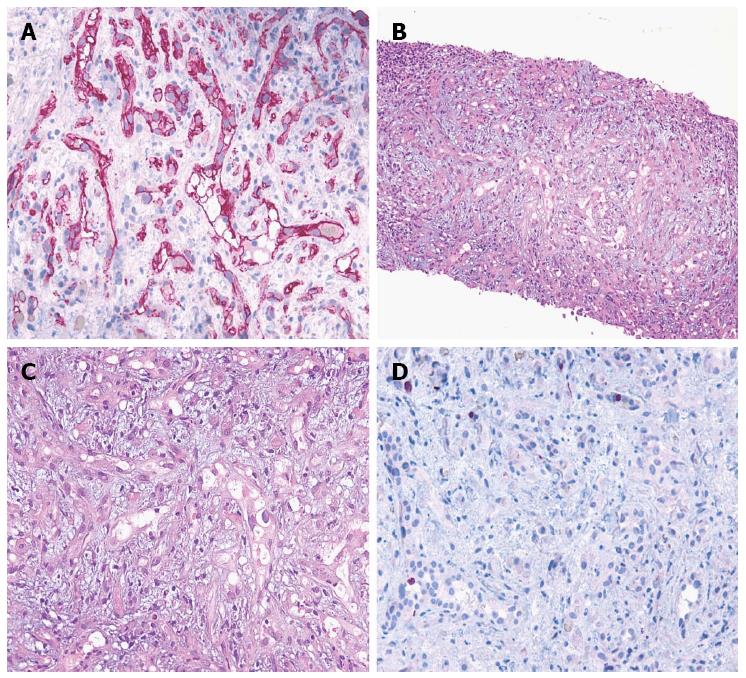 Disease was evaluated by abdominal ultrasound and MR, blood tests, and clinical evaluation every four months. After only two cycles of treatment, liver function tests (LFT) showed that AST and ALT had decreased to the normal range. The other LFT parameters (GGT and ALP) decreased, but remained above the normal range (GGT 121 U/L, ALP 163 U/L). After 6 mo, abdominal ultrasound showed stable disease (Figure 2B). MR also demonstrated an intralesional structure modification as colliquative necrosis; indirect signs of tumor response to the medical treatment (Figure 1B) after 10 mo.

In February 2012, 26 mo after starting lenalidomide, we decided to stop the treatment due to the occurrence of a comorbidity (psychological distress). After five months of treatment discontinuation, an ultrasound evidenced an increase in size of a target hepatic lesion (32.9 mm vs the previous 22.8 mm); therefore lenalidomide therapy was restarted for another six cycles (Figure 2C). A slight reduction in size of the target hepatic lesion (28.1 mm) was demonstrated by subsequent liver ultrasound (US) (Figure 2D). At the time of writing, the patient is continuing to receive treatment and is doing well.

HEH is a rare tumor that develops from vascular endothelial cells with overexpression of VEGF and its receptor[1]. Surgery is the first treatment approach for this disease. In cases of unresectable disease, no standard medical therapy is available[3]. The recent introduction of anti-angiogenic drugs (such as bevacizumab, sorafenib, thalidomide, and lenalidomide) has offered new options in the treatment of HEH[5,6,8,16-18]. Since HEH is a rare tumor, only a few patient case reports or case collections are available. A recent phase 2 study reported on 7 EH patients and 23 with angiosarcoma treated with bevacizumab[17]. Six out of the seven patients obtained stable disease or a partial response. The French Sarcoma Group also presented a phase 2 study with Sorafenib in 15 patients with progressive EH, obtaining interesting results[18].

Lenalidomide is an antineoplastic drug derived by modifying the chemical structure of thalidomide, which not only makes it less toxic, but also more active and potent[21]. It has both anti-angiogenic and antitumor activity. Lenalidomide is approved for the treatment of multiple myeloma and can be used alone or with steroid therapy[26,27]. It is also approved for the treatment of myelodysplastic syndrome with deletion of chromosome 5q [del(5q)] with lower or intermediate-1 risk. Data suggest a role for this therapy in non-Hodgkin lymphoma and chronic lymphocytic leukemia[28-32]. The drug is administered orally and is generally well-tolerated. The most frequent adverse events are fatigue, skin rash, thrombocytopenia, and neutropenia[4,21]. A promising recent study reported the combination of lenalidomide with chemotherapy or proteasome inhibitor in relapsed or refractory multiple myeloma[21].

In our patient, the antitumor activity of lenalidomide in HEH is suggested by the increased size of the target lesion during the period of treatment discontinuation and the new stability obtained after restarting treatment. In another case report of an EH patient treated with lenalidomide, a young woman with cutaneous and intracranial EH with pulmonary, liver, brain, and skill metastases after multiple local and systemic treatments was enrolled in two subsequent lenalidomide protocols that led to stable disease for six years[4].

Our patient has been treated for 39 mo and no side-effects or abnormal laboratory values have been noted.

The decision to stop treatment for a few months was taken at the patient’s request and was not related to lenalidomide. Therefore, lenalidomide appears to be well-tolerated for an extended period.

This is the second report on the potential role of lenalidomide in the treatment of HEH. Further single reports, case collections, or a phase 2 study should be encouraged.

A 73-year-old man with a diagnosis of hepatic epithelioid hemangioendothelioma.

The patient was asymptomatic.

An ultrasound-guided biopsy of one of the hepatic lesions was made. Epithelioid hemangioendothelioma was diagnosed by morphologic and immunohistochemical data. Histologically, the liver tissue was infiltrated by a neoplastic population composed of short strands, cords, and nests of rounded to slightly spindled eosinophilic cells, embedded in a myxohyaline stroma. At immunohistochemistry, tumor cells were CD34 and von Willebrand factor positive, negative for CD21, CD23, smooth muscle actin, epithelial membrane antigen, and cytokeratins, and showed a low proliferation index/MIB1 (< 5%).

The patient was treated with lenalidomide for a total of 39 months with prolonged disease stabilization and, at the time of writing, the patient is still under treatment with a good tolerance profile. During a short period of treatment discontinuation, the disease showed a slight progression that immediately resolved after the reintroduction of lenalidomide. This drug may represent a valid treatment option for hepatic epithelioid hemangioendothelioma. This preliminary result merits further study in a large series.

The authors report an interesting case which presents a conservative therapy of a rare neoplasm in adulthood - hepatic epithelioid hemangioendothelioma. The treatment option described in the article may be helpful for readers who have patients suffering the same condition.