AIM: To investigate the relationship between liver functional impairment and sodium and water retention.

CONCLUSION: Caf t1/2 is a good index to assess the degree of hepatic damage. Hepatic dysfunction may contribute to impairments in renal excretion following acute sodium and water load.

Most data to date have shown that there is a significant relationship between hepatic functional damage and sodium retention, but it remains unclear whether acute liver dysfunction results in sodium and water retention. To understand further the relationship between liver function per se and sodium retention, we investigated renal excretion following acute salt and water load in a rat model of acute hepatic damage.

Twelve hours after removing water and food, the animals received under urethane anesthesia normal saline (4 mL/100 g body wt) through the femoral vein. Urine was collected for 4 h and stored in an Eppendorf tube at -20 °C until analysis. One percent caffeine, 0.1 mL (1 mg/rat), was then administered to the femoral vein for 3 h. Four milliliters of blood were taken from the inferior vena cava and anti-agglutinated with heparin. The plasma was separated to measure caffeine, ALT, and sodium. At this time, liver tissues were taken for pathologic examination and water content calculation.

The plasma caffeine concentration was analyzed with high pressure liquid chromatography (HPLC). Plasma ALT was examined with Reitman method, and serum and urinary sodium levels were measured with flame photometry.

The Caf t1/2 was calculated using the following formula:

where D = the dosage of caffeine (1 mg in this experiment); t = time from caffeine injection to blood collection (180 min); Ccaft = caffeine concentration when blood was taken (mg/L); adv = apparent distribution volume (0.64 mL/kg). Data for each parameter were compared between two groups with a t test and among the three groups with an F test. Regression analysis was used to correlate Caf t1/2 and water content in hepatic tissue, sodium excretory rate, water excretory rate, and plasma ALT. p values less than 0.05 were considered to be statistically significant.

RESULTS
The changes of hepatic tissue

In the control group, the hepatic cells were arranged regularly, and the plates radiated from the central vein to the portal canals. Twenty four hours after CCl4 administration, the hepatic tissue exhibited extensive necrosis, hepatocyte swelling, and vacuolization under light microscopy. In the 48 h group, hepatocyte necrosis, swelling, and vacuolization were still clearly seen but to a lesser extent than the 24 h group. Consistent with the histological changes in the hepatic tissue, water content was significantly higher in both experimental groups than the control group.

Following structural damage to the liver tissue, the capability of the liver to metabolize caffeine was impaired. The Caf t1/2 was prolonged significantly in the 24 h and 48 h groups compared to that in the control group (Table 1). Caf t1/2 and water content in hepatic tissue were significantly correlated (r = 0.701, P < 0.01, Figure 1). 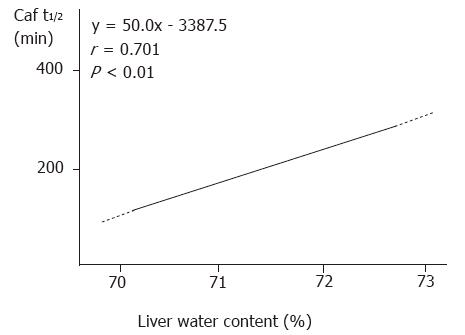 Consistent with our findings on water content in hepatic tissue and Caf t1/2 , plasma levels of ALT rose significantly in both experimental groups. There was a significant positive correlation between ALT levels and Caf t1/2 (r = 0.753, P < 0.01).

Relationship between liver dysfunction and sodium and water excretion

Following the impairment in liver function, the capability of the kidney to excrete acute water and sodium load declined significantly. Although this decline recovered somewhat in the 48 h group, it remained significantly different from that of the control (Table 2). The relationship between Caf t1/2 and renal excretory rate of sodium (Figure 2) and water was significantly correlated (r = -0.612, P < 0.01). There was no significant difference among the three groups in serum sodium level (F = 2.34, P > 0.05, Table 2). 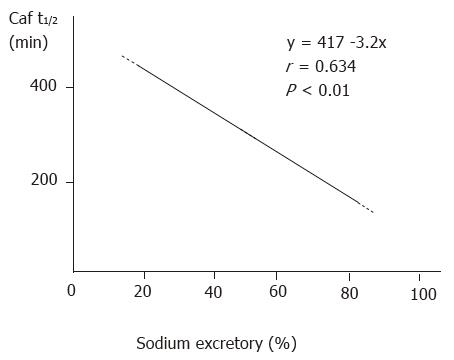 Recently, different models of hepatic damage[1-3] have demonstrated that the decline in liver function is an important cause of salt and water retention. Caffeine is metabolized by hepatic cytochrome P-450, and the ability of the body to clear caffeine reflects metabolic function of the liver. Jost et al[4] showed that the clearance rate of plasma caffeine is in significant agreement with the aminopyrine breath test (r = 0.80, P < 0.01), prothrombin time (r = 0.59, P < 0.01), indo cyanogreen test (r = 0.51, P < 0.01), and galactose clearance rate (r = 0.46, P < 0.01). Therefore, use of Caf t1/2 to quantitate liver function is reliable; HPLC is an efficient and stable means to measure caffeine. Our results found that 24 and 48 h after CCl4 administration, Caf t1/2 was prolonged significantly. Changes in ALT levels and hepatic tissue water content paralleled Caf t1/2 . There was a significant relationship between Caf t1/2 and ALT and between Caf t1/2 and water content of hepatic tissue. These results illustrate that the decrease in liver function is linked to the degree of hepatic tissue damage. Thus, Caf t1/2 may be considered a sensitive index that reflects the degree of acute hepatic tissue damage.

Importantly, following pathological damage of the liver, the plasma Caf t1/2 was prolonged significantly and the ability of the kidney to excrete acute water and sodium load was declined significantly. Caf t1/2 and renal excretory rate of sodium and water were negatively correlated. These results are consistent with the report by Wong et al[5] and identity hepatic tissue damage and liver function decline as important contributors to salt and water retention.