AIM: To determine whether the production of lower interferon gamma (IFNl) by lymphocytes in patients with liver diseases is due to defects of the lymphocytes themselves or to other cofactors, such as interleukin-2 (IL-2).

METHODS: Peripheral blood mononuclear cells (PBMCs) from patients with various liver diseases were cultured with or without phytohemagglutinin (PHA) and IL-2. The cells were harvested and counted, and the supernatants were tested for IFNl by a sensitive and quantitative ABC-enzyme-linked immunosorbent assay (ELISA).

RESULTS: IFNl was not found in serum samples from patients or normal individuals. However, IFNl was detectable in supernatants of non-induced and induced PBMCs by ABC-ELISA. In non-induced PBMCs (group 1), the content of IFNl in supernatants from control, chronic active hepatitis (CAH), chronic persistent hepatitis (CPH), and hepatocellular carcinoma (HCC) was 8.72/L, 5.03/L, 6.02/L, and 4.91/L, respectively. The production of IFNl in liver disease was significantly decreased compared to control. In PBMCs stimulated with PHA (group 2), the content of IFNl was 22.71/L, 17.12/L, 14.54/L, and 17.63/L, respectively. In PBMCs induced by IL-2 (group 3), the amount of IFNl in supernatant from control (60.67/L) was much larger than those from CAH (21.70/L), CPH (24.00/L), and HCC (19.15/L) (p < 0.01). When comparing the amount of IFNl in group 3 with that in group 1, we found that IFNl production was enhanced by nearly 4-folds in liver diseases and by over 7-fold in control. In contrast, the number of PBMCs, whether from liver diseases or from control, was increased by only approximately 3-fold.

CONCLUSION: The decreased production of IFNl in liver diseases, including HCC, is mainly due to endogenous defects of lymphocytes but may also involve a decrease in stimulating cofactors, such as IL-2.

Abnormal immune function is an important mechanism of hepatitis B virus (HBV) infection-related liver diseases and hepatocellular carcinoma (HCC)[1]. It was previously shown that disruption of cellular-mediated immune function, including defects in the production of lymphokines, is involved in HBV infection and HCC[2,3]. Interferon-gamma (IFNγ), one of the most important cytokines with various activities, plays a key role in immunoregulation. It has been suggested that IFNγ production by lymphocytes is correlated with the cause, development, and prognosis of chronic liver diseases[4]. However, it is not clear whether the decrease of IFNγ production is caused by defective secretion of IFNγ producing lymphocytes, by decreased levels of inducing cofactors, such as interleukin-2 (IL-2), or both. In the present study, we measured IL-2-induced IFNγ production in peripheral blood mononuclear cells (PBMCs) in order to evaluate the relationship between IFNγ production and liver diseases.

Five milliliters of venous blood were collected and heparinized. PBMCs were isolated from whole heparinized blood by centrifugation over Ficoll, washed three times with Roswell Park Memorial Institute (RPMI)-1640 medium (Gibco, Carlsbad, CA, United States), and then suspended at 2 × 106 cells/mL in RPMI-1640 medium containing 10% fetal calf serum. The viability of cells was higher than 95% by the trypan blue exclusive test.

Induction of IFNγ from PBMCs

Each PBMC sample was placed in a 96-well plate (2 × 105 cells/100 μL per well) in three groups. For each group, double wells were designed. In group 1, 100 μL of medium was added and cultured without any inducers. In group 2, 100 μL of 1:100 diluted phytohemagglutinin (PHA) (type M. Sigma, St Louis, MO, United States) was added. In group 3, 100 μL of IL-2 (gift from the Department of Microbiology, SMMC) with the activity of 2 × 103 U/mL was added. The cells were incubated at 37 °C in 5% CO2 for 72 h, and the culture supernatants were removed and tested for IFNγ. The cells were counted under a light microscope.

IFNγ in supernatants was detected by a quantitative ABC-enzyme linked immune sorbent assay (ELISA), as we previously described[5].

Data were analyzed by Student’s t test and F test.

The amount of IFNγ produced in non-induced supernatants was 8.72 ± 0.65 μg/L (n = 10). Stimulation with PHA and IL-2 with increasing time durations and dosages significantly enhanced the production of IFNγ (p < 0.01). The relationships between course and effectiveness and between dosage and effectiveness are indicated in Figure 1 and Figure 2. 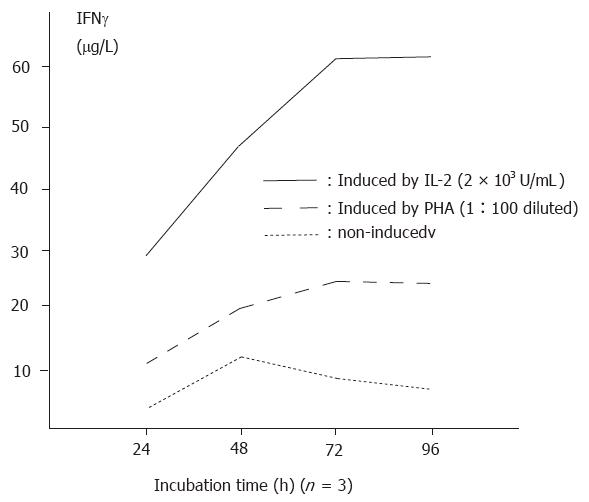 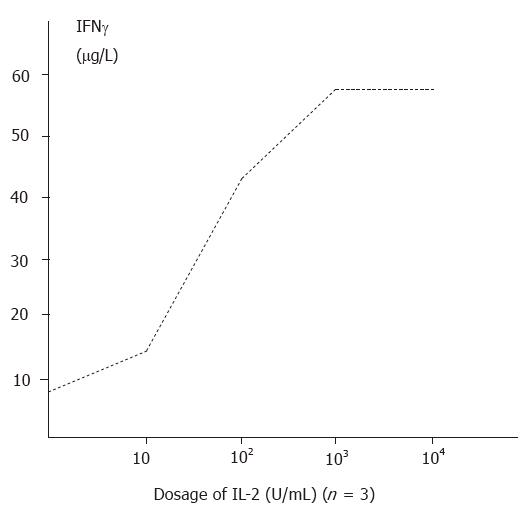 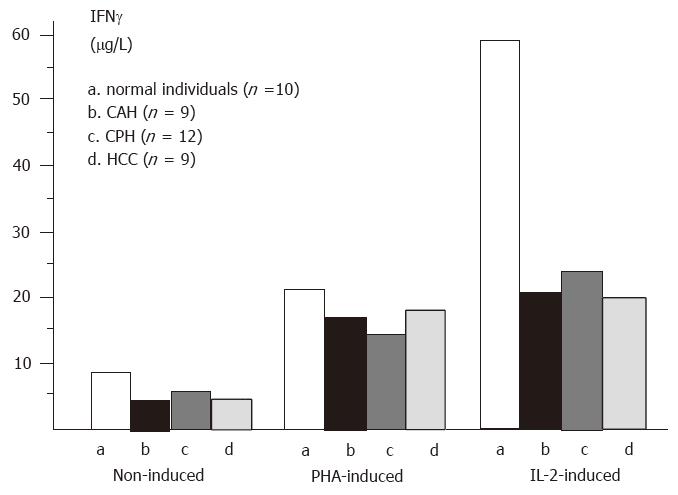 Figure 3 IFNγ production by PBMCs from patients with liver diseases and from normal individuals.
The number of IL-2 induced PBMCs

Recently, the importance of cytokines in immunoregulation has been recognized, and the correlation between cytokines and body disorders is continuing to be elucidated[6]. The dysfunction of cellular immunity is an important mechanism of HBV infection-related chronic liver diseases and is associated with persistent HBV infection[7].

Some new therapies for HBV infection, such as the application of IFNs and lymphokine activated killer (LAK) cells, are partially effective for the clearance of HBV[8]. More recently, cytokine gene transfer therapy for HBV infection and HCC has also been reported[9]. All these therapies are based on findings that the production of cytokines is decreased in hepatitis B and that the replacement of cytokines is an effective way to maintain balance of the immune system. In this study, we found that IFNγ production by non-induced and lymphoblastized PBMCs from patients with various chronic liver diseases and HCC was significantly lower than that in normal individuals, with the lowest in patients with cirrhosis. These findings suggest that IFNγ producing cells, i.e., T helper and natural killer (NK) cells, may be defective in the production of IFNγ. Among the factors that stimulate the production of IFNγ, IL-2 is the most important[10]. In this study, when PBMCs were cultured with IL-2, the secretion of IFNγ was enhanced 3.9 (in HCC) to 6.8 (in control) fold, whereas the number of PBMCs was increased by only 3 times, suggesting that the enhancement of IFNγ production was related not only to the increase in PBMC number but also to the enhancement in the IFNγ producing ability of PBMCs. It was reported that LAK cell therapy was shortly effective for suppression of HBV duplication. These authors suggested that the increase in cytokine production of LAK cells was involved in the anti-HBV mechanism[7]. Our results are consistent with these findings.

Notably, we failed to detect IFNγ directly from the sera of patients or normal individuals by a sensitive and quantitative ABC-ELISA established in our laboratory. Some other authors reported similar results by CPE. It may be concluded that the level of IFNγ secreted in serum is too small to be detected by the present methods. Moreover, the amount of IFNγ in serum may be influenced by many factors, such as the half-life of IFNγ, liver and renal function, and the time of collecting blood. Therefore, we recommend for future studies on cytokines, including IFNγ, the preparation of lymphocytes or PBMCs rather than serum.