METHODS: An animal model of superior mesenteric artery (SMA) occlusion was used. Seventy-two male Wistar rats were randomized equally to three treatment groups of 24 each. Group 1 was injected with 4 μg of bFGF in 0.15 mL of normal saline solution containing 0.1% (w/v) heparin through the jugular vein at the onset of reperfusion. Group 2 received normal saline without bFGF. Group 3 was treated was given a sham operation without SMA occlusion. Liver function, serum tumor necrosis factor (TNF)α, bacterial cultures, and pathological evaluations were carried out.

RESULTS: In group 1, alanine transaminase (ALT), aspartate transaminase (AST), and serum TNFα were significantly reduced at 6, 24 and 48 h compared with group 2. Bacterial cultures showed that the bacterial translocation from gut to liver, spleen, and mesenteric lymph nodes (MLN) was significantly lower in group 1 than in group 2. Pathological evaluation was consistent with a significant protective effect of bFGF.

CONCLUSION: Venous administration of bFGF may help reduce gut and liver ischemia/reperfusion injury through its mitogenic and nonmitogenic hormone-like effects.

Gut ischemia/reperfusion injury after serious trauma is an important problem in the clinic. Damage to gut barrier function may lead to translocation of bacteria from the gut to internal organs, resulting in organ impairment. Preservation of the gut barrier is thus a key step in preventing multiple organ failure after trauma[1]. The involvement of growth factors and their effects on ischemic injury to internal organs is an area of active research[2]. We evaluated systemic administration of basic fibroblast growth factor (bFGF) for prevention of serious gut and liver injury after occlusion of the superior mesenteric artery (SMA) and investigated its mechanism of action.

Seventy-two male Wistar rats weighing 200-250 g rams were housed in the laboratory for 1 wk prior to use in the study, and had free access to food and water. Occlusion of the superior mesenteric artery (SMA) was done under intravenous anesthesia with sodium pentothal (40 mg/kg). A midabdominal incision was made, and the SMA was identified and isolated by blunt dissection. Blood flow was completely blocked by a microvascular clamp placed on the root of SMA. The clamp was removed after 45 min, and return of blood flow to the gut was confirmed visually. The incision was then closed in two layers, animals were allowed to recover spontaneously and were observed for 3 d. All operations were performed under aseptic conditions.

A midabdominal incision was made under sterile conditions at 6, 24, and 48 h after ischemia, and swabs of the peritoneal cavity were obtained for aerobic culture. The mesenteric lymph nodes (MLN), liver, and spleen were removed, weighed, and homogenized in sterile grinding tubes. The samples were plated for quantitative culture and incubated at 37 °C for 48 h before reading.

Specimens of gut and liver tissue were taken for examination by light microscopy at 6, 24 and 48 h after ischemia.

In groups 1 and 2, serum TNFα concentrations rose and fell, with a peak at 6 h, but declined at 24 and 48 h. No significant changes in serum TN were found at all times (Figure 1). 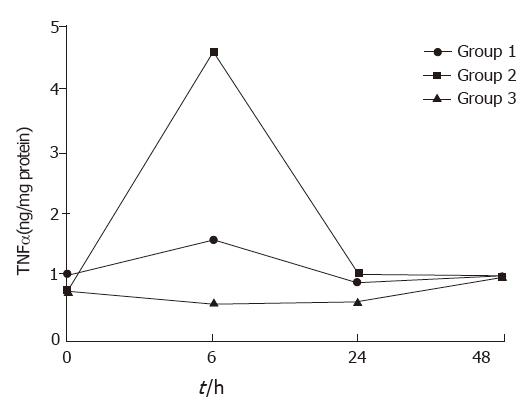 Pathologic examination found that the proportion of intestine and liver tissue samples with subepithelial edema, hemorrhage, erosion, or neutrophilic and lymphocytic infiltration was much larger in saline-treated than in bFGF-treated rats. No changes in tissue structure were observed in sham operated rats.

Mucosal injuries that lead to translocation of bacteria or endotoxins from the gut to other tissues and organs are the primary factor in the pathogenesis of multiple organ injury or failure after serious trauma[1,2]. Resuscitation and anti-oxidation treatment are effective in reducing multiple organ injury and mortality[3], but the traditional methods can only block the cycle of tissue injury. They do not accelerate the repair of damaged tissues. From what is known of the pathogenesis of multiple organ failure, we considered that the mitogenic effects and nonmitogenic hormone-like activity of bFGF, might be protective against ischemic organ injuries[4-6]. The study data showed that systemic administration of bFGF at the onset of reperfusion reduced the functional and morphological changes of the gut and liver and reduced bacterial translocation from the gut to the liver and spleen. Moreover, inflammatory factors such as TNFα were reduced by bFGF treatment. In a model of stomach ischemia, Ishikawa et al[7] observed that the administration of epidermal growth factor (EGF) reduced mucosal edema and necrosis. It follows that growth factors may be useful in promoting internal organ repair after trauma.

Possible mechanisms of bFGF’s protection against ischemic injury may its vasodilator activity, which may help open microvascular beds and ameliorate the “no reflow” phenomenon that occurs after ischemia[8]. It has been found that the longer ischemia persists, the more serious the gut and liver damage and the higher the mortality. Increased intracellular calcium and redistribution of intracellular calcium pools may result in cell injury and contribute to cell death. Because bFGF can trigger the influx and intracellular release of Ca2+, it may have a role in regulating extracellular and intracellular Ca2+ balance and modulate transduction of transmembrane signals to inhibit Ca2+-dependent ATPase and other mitochondrial enzyme activity associated with ischemia/reperfusion[9] Finally, signal transduction by bFGF and its interactions with other enzymes might also be involved in the protective effect of bFGF on ischemia/reperfusion injury. Further study is needed.