AIM: To screen the enzyme-inhibition and observe the pharmacologic effects of circulation-improving Chinese medicines on intestinal and pancreatic hemodynamics.

METHODS: In vitro screening of the amylase-and lipase-inhibiting effects of nine Chinese traditional medicines was carried out. Each extract was prepared following methods described by LIN Qi-Shou. Tests of the inhibition of trypsin and elastase activity were carried out by following methods described by ZHANG Tian-Min s and JIANG Chuan-Kui. A Modified Leslie method was used determine the effects of the best circulation-improving Chinese herb, Tao-Ren (Semen Persicae), and its extract (HHI-I), on intestinal hemodynamics. An electromagnetic flowmeter was used to measure intestinal blood flow and and a blood oxygen meter was used to measure oxygen consumption. A laser Doppler microcirculation dynamic analyzer was used for to measurement the effect of HHI-I on pancreatic microcirculation, and a tissue oxygen meter was used to measure changes of pancreatic oxygen partial pressure.

CONCLUSION: Yuan-Hu and Tao-Ren used together have the potential to become novel, effective medicines

The mortality of severe acute pancreatitis (SAP) is high, and there are no specific treatments. The development of effective SAP therapy is a worldwide priority. Inhibition of pancreatic enzymes and improving pancreatic blood circulation are are potential treatment approach. There have been many reports of successful treatment of SAP with Chinese medicines. Treating SAP with the most effective enzyme-inhibiting and circulation-improving herbs may result in decreased in SAP mortality. In this study, we screened nine enzyme-inhibiting herbs and evaluated the hemodynamic effects of the most effective circulation-improving Chinese medicinal herbs.

Method Extracts of each herb were prepared following methods previously described by Lin Qi-Shou[1]. The anti-trypsin inhibitory activity of 300 μL samples of each extract were tested and compared with control reactions that proceeded without inhibitors[2].

Results All nine herbal extracts inhibited trypsin activity, but they differed in effectiveness (Table 1), which may have been related to differences in the concentrations of active substance in each herb. Yuan Hu was the most effective followed by Da Huang (Radix et Rhizoma Rhei), and Zhi Zi ( Fructus Gardeniae ) (Table 1).

Method The in vitro test followed a method previously described by Chuan-Rui Jiang[3]. Anti-elastase activity was tested in 200 μL sample of each extract.

Results Most of the nine extracts inhibited elastase activity, but a few had an activating effect (Table 2). Yuan Hu was the most effective inhibitor, followed by Huang Qin and Hang Shao.

Effect of HHI I on intestinal hemodynamics in dogs

Method Intestinal hemodynamics were evaluated following a method previously described by Leslie[5]. Blood flow was measured in the superior mesenteric artery with an electromagnetic flowmeter. Blood samples were obtained from femoral artery and superior mesenteric vein, and the oxygen consumption of intestine was calculated. Five dogs with mean body weight of 19.2 ± 3.96 kg were used. A solution of Huoxue Huayu (HHI-I) was infused intravenously at a dose of 2.0 mL/kg of body weight.

Results HHI-I increased intestinal blood flow and oxygen consumption (Table 3, Figure 1). It also increased oxygen extraction (A-V)O2 and decreased vascular resistance. No effect of HHI-I on hematocrit was observed. No effects were observed in a control group given an intravenous infusion of saline. 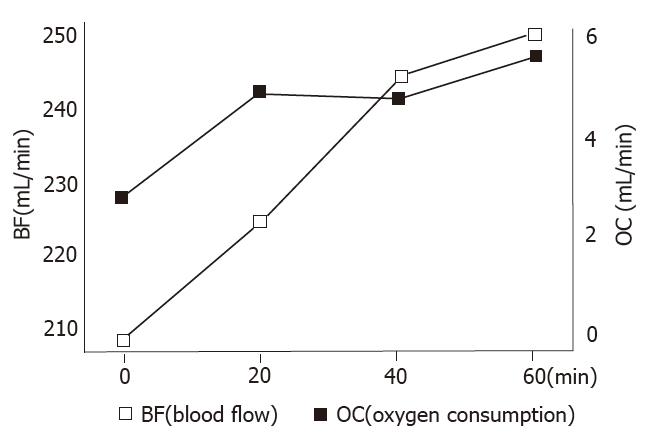 Experimental methods Five healthy male and female dogs weighing 18.9 ± 2.61 kg were anesthetized, and the pancreas was exposed. An oxygen meter (POG-5000, Japan) electrode was inserted into the pancreatic tissue to measure tissue oxygen tension, and pancreatic microcirculation was measured by a dynamic laser Doppler microcirculation analyzer (JI-200, Tianjin). The dose of HHI I used in this experiment was the same as that used to evaluate the effect on intestinal hemodynamics.

Results Blood microcirculation in pancreatic tissue significantly increased 10 min after HHI-I infusion, and the increase was maintained during the whole period of infusion. The oxygen tension of pancreas increased at the same time. The two indices did not change in control animals (Table 4, Figure 2 and Figure 3). 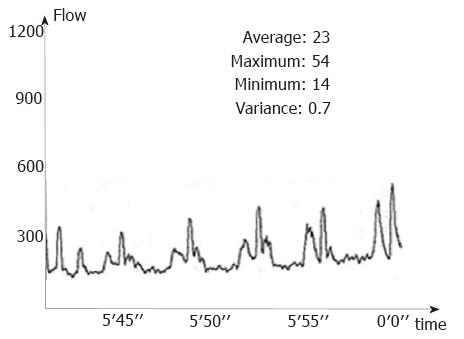 Figure 2 Effect of HHI-I on pancreatic microcirculation before administration 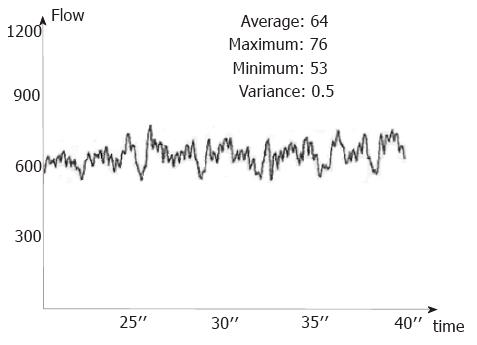 Even though aprotinin has shown disappointing results in experimental and clinical treatment of SAP, inhibition of pancreatic enzymes should not be ignored as a possible treatment. In addition to trypsin, gabexate mesilate (417 Daltons) also inhibits phospholipase A2 and has shown satisfactory therapeutic effects in the preclinical studies and clinical trials. Camostate (FOY-305, 494.5 Daltons) having a more extensive spectrum of enzyme inhibition, and has markedly increased SAP survival rates in animal models[6,7]. Because it contains agglutinin and native antiproteases, human plasma can significantly improve survival time in rats with SAP caused by 5% sodium taurocholate compared with control animals. In a rat SAP model caused by caerulein infusion (5 μg/kg of body weight per hour), urinastatin, a protease inhibitor extracted from human urine, had protective effects on serum amylase, pancreatic water content, amylase content of pancreatic tissue, lysosome distribution, and fragility of acinar cells and lysosomes[8]. ON03307, a synthetic antiprotease with low molecular weight and high activity, was effective against SAP when administered with allopurinol[9]. Combination treatment increased release of amylase and cathepsin by pancreatic juice and increased the proportion of zymogen-containing lysosomes. Combined administration of a protease inhibitor and a xanthine oxygenase inhibitor thus improved SAP treatment. In the pathogenesis of SAP, elastase digests elastin in blood vessel walls playing a pivotal role in the conversion of mild into severe hemorrhagic and necrotic pancreatitis. A synthetic, low molecular weight inhibitor of pancreatic elastase would be of great value, and glutaryl-trialanin-ethylamide a competitive inhibitor of pancreatic elastase, has been shown to slow the progress of SAP in a rat model[10].

There have been many reports of the enzyme inhibitory activity of Chinese herbs, including Ban Xia (Rhizoma Pinelliae), Da Huang, Huang Qin, Hu Lian, and Bai Shao[11]. This study found Yuan Hu to be the strongest inhibitor of trypsin and elastase; and in our laboratory, the injectable form is called YHI. It has also been found that combined treatment with YHI and HHI-I reduces the severity of experimental SAP rabbits (unpublished data).

Many experiment al studies and clinical trials have found that pancreatic ischemia in the early stage of AP is an important step in the development of necrosis[12,13]. In dogs, occlusion of small pancreatic arterioles by 8-20 μm microsphere induced hemorrhagic and necrotic pancreatitis; pancreatic edema superimposed on pancreatic ischemia can lead to necrotic pancreatitis. The effectiveness of low molecular weight dextran for prevention and treatment of pancreatic ischemia has been reported in experimental animal models of AP. Dextran has specific effects on pancreatic microcirculation, and isovolemic hemodilution with dextran 60 at a dose of 10 ± 1.3 mL/kg body weight reduced vacuolization of acinar cells and parenchymal edema compared with controls[14]. In a clinical trial including 13 SAP patients (mean Ranson score of 4.6). The average time from symptom appearance to dextran hemodilution was 38 h (range 19-90 h). Hematocrit decreased from 50% ± 6% to 34% ± 3% in the first hour an 31% ± 4% in the second hour. The volume exchanged was 750-1700 mL, and the mortality rate was only 7.7%[15]. HHI-I, Tao Ren injection, is the most effective herb selected from the HuoXue HuaYu decoction used in our hospital for improving blood circulation and increasing oxygen consumption[4]. This study provides additional evidence of the positive effect of HHI-I on intestinal hemodynamics and pancreatic oxygen supply, and microcirculation in this dog model. HHI-I has potential as an effective medicine to improving blood circulation and to treat SAP.