AIM: The aim was to investigate the clinical significance of vascular endothelial growth factor (VEGF) expression in gastric carcinoma.

METHODS: The expression of VEGF in 128 gastric carcinomas was investigated by immunohistochemical staining with an anti-VEGF polyclonal antibody. Correlations between VEGF expression and various clinicopathological factors and prognosis were studied.

RESULTS: The overall VEGF-rich expression rate was 64.1% in gastric carcinoma tissue, and was significantly higher in patients with stage III and IV disease than in those with stage I disease (P < 0.05). Significant differences in expression rate were related to growth pattern, serosal invasion, and lymph node metastasis. VEGF-rich expression was much higher in tumors with an expanding growth pattern (71.8%) or serosal invasion (73.5%) than in those with an infiltrative growth pattern (52.0%) or nonserosal invasion (53.3%) (P < 0.025, respectively). Expression was also significantly higher in patients with lymph node metastases (75.0%) than in those without such metastases (50.0%, P < 0.05). A postoperative survey of 86 patients who had been followed for at least 5 years found that the 5-year survival rate of patients with VEGF-rich tumors was significantly lower than that of patients with VEGF-poor tumors (P < 0.05).

CONCLUSION: VEGF expression may be associated with invasion and metastasis and may also be a useful indicator of gastric carcinoma prognosis.

Solid tumors require neovascularization for growth and metastasis. Experimental evidence shows that endothelial growth factors, such as basic fibroblastic growth factor (bFGF), transforming growth factor (TGF), and vascular endothelial growth factor (VEGF) secreted by tumor cells play a crucial role in tumor angiogenesis[1]. VEGF regulates microvasculature permeability and is an endothelial cell-specific mitogen[2,3], and is likely to play an important role in both tumor angiogenesis and generation of tumor stroma[4]. Results obtained with monoclonal neutralizing antibodies to VEGF have produced strong evidence that VEGF contributes to the progression and metastasis of solid tumors by promoting angiogenesis[5,6].We used immunohistochemical staining of gastric carcinoma tissue with an anti-VEGF polyclonal antibody to investigate the correlations between VEGF expression, various clinicopathological factors, and prognosis.

Resected specimens from 128 patients with gastric carcinoma who underwent gastrectomy at Ruijin Hospital were studied. The patients were 38 to 78 years of age (mean: 58.7 years), 86 were men, and 42 were women. No patient had received chemotherapy or radiation therapy before surgery. The Guidelines of National Gastric Cancer Association were used for pathologic diagnosis and classification of variables, and histologic staging was determined according to the TNM criteria (Table 1). In this study, tumors were divided into two histologic subgroups, a differentiated type including of papillary and tubular adenocarcinomas, and an undifferentiated type including poorly differentiated adenocarcinomas, signet ring cell carcinomas, and mucinous adenocarcinomas. Curative resection was performed in 109 patients, 86 of whom were followed for at least 5 years after surgery; 19 patients underwent noncurative surgical procedures.

For pathological evaluation and immunohistochemistry, tissue specimens were fixed in a 10% formaldehyde solution, embedded in paraffin, sectioned at 4 μm, and mounted on glass slides.

Immunohistochemical staining was performed by the immuno-peroxidase technique following predigestion and trypsinization. Anti-VEGF polyclonal antibodies were used at a 1:20 dilution. Normal rabbit immunoglobulin G was substituted for primary antibody as the negative control. Immunoreactivity was graded as (-), (±), (+) and (++) by the staining intensity. Tumors graded as (+) or (++) were designated as VEGF-rich and those with (-) or (±) staining were VEGF-poor. Tumors including both VEGF-positive and VEGF-negative subpopulations were graded as (+). The evaluations were done by an observer completely blinded to the patient characteristics.

The significance of relationships between VEGF expression and clinicopathological factors was tested by the chi-square method. Survival curves were calculated using the Kaplan-Meier method and analyzed by the log rank test. Statistical significance was defined as P < 0.05.

The expression of VEGF was observed mainly in the cytoplasm of tumor cells. A representative case of VEGF (++) staining is shown in Figure 1. VEGF staining was blocked by pretreatment with an antibody to recombinant human VEGF (data not shown). Weakly positive VEGF staining was seen in endothelial cells, no direct correlation was found between the staining intensity of tumor cells and that of endothelial cells. A heterogeneous distribution of VEGF-stained tumor cells was seen in tissue from several of the tumors. Of 128 tumors, 82 (64.1%) were VEGF-rich; faint staining was seen in the cells of most VEGF-poor tumors. 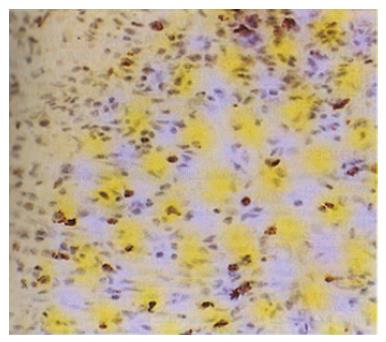 Table 2 shows the relationships of VEGF expression with various clinicopathologic factors. There was a statistically significant association between VEGF-rich expression and growth pattern, depth of invasion, and lymph node metastasis. However, expression rate was not significantly correlated with histologic type.

Of the 86 patients who underwent curative resection and were followed for at least 5 years, 42 died following tumor recurrence. Postoperative analysis demonstrated that the 5-year survival rate of patients with VEGF-rich tumors (42.8%, 24/56) was significantly lower than that of patients with VEGF-poor tumors (66.7%, 20/30; (Figure 2, P < 0.05, log-rank test). 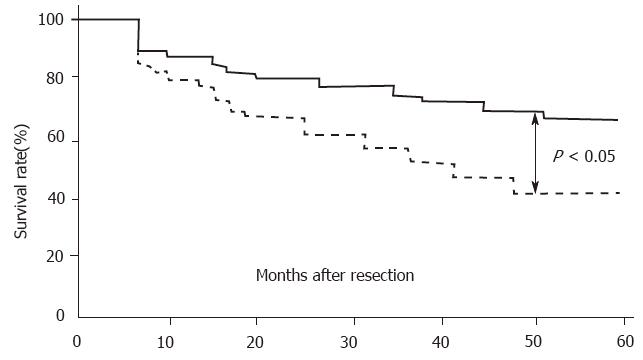 VEGF is an endothelial cell-specific mitogen and an in vivo inducer of tumor angiogenesis. It has also been purified and shown to act independently as a tumor-derived vascular permeability factor promoting the extravasation of plasma proteins, including fibrinogen[2,3]. VEGF thus has important biological significance for the generation of vascularized tumor stroma. VEGF is known to be expressed in a variety of tumor cell types and in tumor tissues that have are characterized clinically by their neovascularization. In this study, we investigated the expression of VEGF in gastric cancer and observed a significant correlation between VEGF expression and tumor growth pattern, invasion depth, and lymph node metastasis. Melnyk et al[8] investigated the effect of VEGF inhibition on growth of primary tumors and on micrometastasis in experimental animals, and found that anti-VEGF antibodies not only inhibited growth of primary tumors but also suppressed metastasis to distant sites. This suggests that VEGF may have a clinically important effect on tumor growth and distant metastasis. We noted that the VEGF expression rate in patients with stage III and stage IV gastric carcinoma was significantly higher than that in patients with stage I disease, which supports the view that VEGF has a direct effect on tumor growth and metastasis. Many studies have suggested that VEGF contributes to tumor growth and invasion by promoting angiogenesis, which increases the tumor blood supply. Moreover, newly formed tumor capillaries have fragmented basement membranes and leak, making it easier for tumor cells to enter the circulation and form metastases. VEGF expression level may thus predict the biological behavior of gastric carcinoma.

Although angiogenesis is seen as in increase in blood vessel formation, some studies have found that it is also correlated with increased lymph node metastasis. Smith and Basu demonstrated that neovascularization of rabbit corneas following injection of India ink led to the the appearance of ink particles in ipsilateral lymph nodes. These findings indicate that lymphocapillary anastomoses are present and/or that angiogenesis correlates with the formation of new lymphatic vessels. Therefore, we consider that VEGF not only promotes angiogenesis but also induces the formation of new lymphatic vessels, increasing the opportunity for tumor cells to enter lymphatic vessels and form lymph node metastases.

With regard to prognosis, Toi et al[7] have shown that VEGF expression is closely associated with early relapse after surgery for primary breast cancer. The relapse-free survival rate of patients with VEGF-rich tumors was significantly lower than that of patients with VEGF-poor tumors, and VEGF status was found to be an independent prognostic indicator. Our study confirmed these findings in gastric carcinoma. We observed a significantly worse prognosis in patients with VEGF-rich compared with VEGF-poor tumors. This result suggests that VEGF expression status is a useful prognostic indicator in gastric carcinoma. Recently, it was reported that administration of a neutralizing monoclonal antibody against human VEGF inhibited the growth and metastasis of human tumor xenografts in nude mouse[5,6]. Millauer et al[9] reported that growth of C6 rat glioblastoma cells in nude mice was suppressed after local administration of retrovirus expressing a dominant negative mutant of flk-1, the receptor of VEGF. These results provided a scientific rationale for studying the effect of VEGF on human tumorigenesis, invasion and metastasis, and for adopting treatment strategies targeting VEGF.