METHODS: A total of 128 specimens resected from patients with gastric carcinoma were investigated by immunohistochemical staining with a monoclonal antibody against F-RAg. Correlations between the microvessel count (the mean number of microvessel in the five areas of highest vascular density at 200 × magnification) and various clinicopathologic factors and prognosis were studied for 86 cases with complete follow-up data.

CONCLUSION: Microvessel count may be a useful prognostic indicator in patients with gastric carcinoma.

It has been shown by many studies that tumor growth depends on neovascularization and that there is correlation between high vascular density and the malignant potential as well as the presence of tumor metastasis[1,2]. Recently, increasing evidence has been presented to support that the intratumor microvessel count (MVC) is closely related to the clinical prognosis. Weidner et al[3] have reported a statistically significant correlation between the incidence of metastasis and MVC in histologic sections of primary breast carcinoma, with both relapse-free and overall survival rates decreasing with increasing MVC. In these studies, microvessels were usually highlighted by staining for the factor-VIII-related antigen (F-RAg).

In this study, we investigate the correlation between MVC and various clinicopathologic factors in and prognosis of gastric carcinoma by using an immunohistochemical technique with an anti F-RAg monoclonal antibody.

Resected specimens obtained from 128 patients with gastric carcinoma who underwent gastrectomy at Ruijin Hospital were studied. The patients ranged in age from 38 to 78 years-old (average age, 58.7 years-old). There were 86 males and 42 females. No patient had received chemotherapy or radiation therapy before surgery. The Rules of National Gastric Cancer Association were used for the pathologic diagnosis and classification of variables. The histologic stage was defined according to the TNM staging method (Table 1). Tumors were divided into the following two histologic subgroups: differentiated type, which included papillary and tubular adenocarcinomas; undifferentiated type, which included poorly differentiated adenocarcinomas, signet ring cell carcinomas and mucinous adenocarcinomas. A total of 109 patients underwent curative resection and 19 patients received non-curative surgical procedures, among them 86 patients were followed-up for at least 5 years after surgery.

All specimens were fixed in a 10% formaldehyde solution and embedded in paraffin, after which 4 μm thick sections were cut and mounted on glass slides.

Monoclonal antibodies F8/86 to RAg were used at a dilution of 1:100 for the LSAB technique. The secondary antibody used was biotinylated rabbit anti-mouse IgGs at a dilution of 1:400. The experiment was carried out according to the instructions provided with the LSAB kits. Normal mouse lgG was substituted for primary antibody for the negative control.

Slides were interpreted for antigen expression by two investigators without knowledge of the corresponding clinicopathologic data. Any single brown-stained cell or cluster of cells, clearly distinguishable from background was counted as a vessel. Branching structures were counted as a single vessel, unless there was a break in the continuity of the structure. MVC was obtained in five areas of the highest vascular density within the tumor at 200 × magnification (× 20 objective and × 10 ocular, 0.739 mm2 per field), and the mean number in these areas was calculated.

All values were expressed as x-± s. The relationship between MVC and clinicopathologic factors was examined by the Wilcoxon test. Survival rates were calculated using the Kaplan-Meier method. Statistical significance was defined as P < 0.05.

Microvessels can be distributed anywhere within the tumor, but those in the sclerotic areas and areas adjacent to benign tissues and non-tumor tissues were not counted. Individual tumors demonstrated considerable heterogeneity in MVC. MVCs of the 128 patients with gastric carcinoma ranged from 3 to 50, with a mean of 16.5 ± 8.5. Table 2 shows the correlations between MVC and various clinicopathologic factors. There was no statistically significant difference found between MVC and histological type, growth pattern or depth of invasion. However, the MVC in patients with lymph node metastases was significantly higher (P < 0.01) than in those without lymph node metastases.

Relationship between MVC and prognosis

Among the 86 patients who underwent curative resection and were followed-up for at least 5 years, 42 died of recurrence; the mean MVC of these patients was 15.9 ± 8.2. To evaluate the relationship between MVC and the overall survival, tumors were separated on the basis of the mean values for MVC (16) as follows: hypervascular group having MVC ≥ 16 and hypovascular group having MVC < 16. As shown in Figure 1, the 5-year survival rate was 58.7% (27/46) for the patients with low MVC, but only 42.5% (17/40) for the patients with high MVC; the difference was significant between the two groups (P < 0.05). 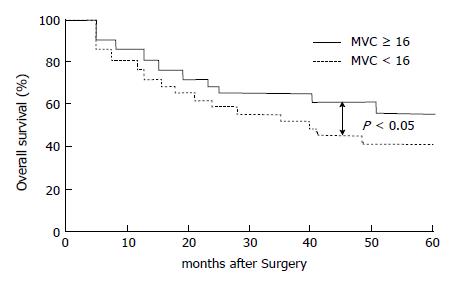 It has been demonstrated by much experimental data that malignant tumors depend on neovascularization for their growth, invasiveness and metastasis[4]; in addition, it has been shown that tumors produce several angiogenic factors, such as bFGF, VEGF, etc[5]. Recently, it has been suggested that the degree of tumor angiogenesis plays an important role in clinical outcome, indicating that angiogenic properties may be correlated with tumor aggressiveness[2]. In our study, there were no significant correlations found between MVC and histological type, depth of invasion, or growth pattern. However, MVC increased with histologic stage and was significantly higher in patients with lymph node metastases than in those without lymph node metastases. In other tumors, some studies have shown a significant correlation between MVC and the presence of metastatic disease in invasive breast cancer. All these investigations suggested that angiogenesis reflects an increased malignancy.

Chemotherapy, radiation therapy and other adjuvant therapies have been given to patients with advanced gastric cancer to prevent recurrence after surgery. However, Miwa[8] reported that 50% of the patients with advanced gastric cancer survived after curative resection without need for any post-operative treatment. Therefore, patients who will need adjuvant therapies should be selected by some indicators reflecting the probability of recurrence. Although little is known about the strong indicators for recurrence of gastric carcinoma, we think that MVC in resected specimens may be a better index for identifying patients who will need adjuvant therapy post-operatively.

In summary, this retrospective study showed that intratumor MVC may be one of the useful prognostic indicators of patients with gastric carcinoma. If this result was further confirmed in larger samples, it might be possible to add along with other prognostic factors to the strategy for identifying patients at high risk of metastasis and tumor recurrence and to guide decisions on application of adjuvant therapy after operation.