RESULTS: Following DSA, histological analysis identified 6 cases with 100% necrosis, 14 cases with 30%-95% necrosis, 19 cases with 0%-5% necrosis after TAE and 11 cases without necrosis. The presence of necrosis was related to the pathological type, encapsulation and vasculature injury, but not to the histological grade, times of treatment or lymphocyte infiltration of the liver neoplasms.

CONCLUSION: TAE is an effective therapy for late-stage HCC. Encapsulated HCC is a preferable indicator for TAE.

In the first half of the 20th century, no remarkable progress was made towards advancing the clinical aspect of hepatocellular carcinoma (HCC) and the average survival of patients with HCC was around 2.5 mo. Between the 1970s and 1980s, alpha-fetoprotein (AFP) serosurvey was adopted for use in high-risk populations and the practice of small HCC resection opened a new era in clinical research of HCC, resulting in marked improvement of the 5-year survival. In the 1980s to 1990s, with the rapid progress of medical imaging and regional cancer therapies, substantial advances were made in the diagnosis and treatment of both small and large HCC. Surgical resection is still the first choice for treatment of HCC, but this operation is not always possible in cases with large mass of HCC. In addition, HCC frequently recurs after surgery. Among various chemotherapeutic modalities, transcatheter arterial chemoembolization (TAE) has demonstrated great potential for improving survival rate[1,2].

In China, HCC has been reported as the second most prevalent cancer killer in rural areas and as the third in cities, with 110000 patients killed annually and accounting for 40% of the HCC deaths in the world. In China, HCC deaths will probably surpass those of gastric cancer in the 21st century. The major clinical obstacle in further prolonging survival of HCC patients is recurrence and metastasis after resection, and re-resection is an effective approach to prolong survival. However, TAE might be useful for preventing and treating the recurrence.

TAE was initially applied to cases of unresectable HCC as a palliative treatment[3], but recently it has been used as a preoperative modality in operable cases. However, few reports present a significant number of resected HCC cases after TAE using histological methods[4-6], and it is not clear which type of HCC patients respond well to TAE.

From 1988 to 1995, 307 patients with resectable HCC underwent hepatic resection in the Department of Surgery, Chinese PLA General Hospital. TAE was performed for 39 of these patients and digital selective angiography (DSA) was performed in 11 patients as control.

Angiographic studies of the selective celiac and superior mesenteric arteries were made before TAE. Subsequently, the following TAE procedure was performed before surgery. Chemoembolization with gelatin sponge particles soaked in contrast medium was conducted immediately after injection of 4-20 mL of iodized oil mixed with 12-36 mg of mitomycin C and/or 10-60 mg of amycin or adriamycin through the hepatic and collateral arteries supplying the tumors. The injection was made under fluoroscopic control, permitting it to be slowed or discontinued if retrograde flow occurred.

All resected specimens were cut into slices 10-mm thick, after fixation in 10% formaldehyde solution. After macroscopic observation of the slices, each slice containing the tumor was sectioned for histological examination, and all lesions that differed in size or color from the surrounding parenchyma were sampled. All paraffin-embedded sample blocks were used for routine staining with hematoxylin and eosin.

Tumors were classified according to the following 7 features: presence or absence of a surrounding fibrous capsule; necrosis rate as an indicator of TAE response; histological type; differentiation of the tumors; time of TAE; damage of vasculature; lymphocyte infiltration. The extent of necrosis of tumors was measured for the largest cut surface area and expressed as a percentage. The tumor was assessed pathologically according to Peter’s guidelines. The degree of lymphocyte infiltration was classified as follows: “+”, a few lymphocytes; “++”, moderate lymphocytes; “+++”, dense lymphocytes. 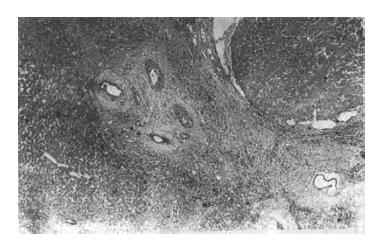 The relationship between necrosis and related factors is shown in Table 2. No necrosis was found in 2 cases of cholangiocarcinoma, 5 cases of metastatic neoplasm, 9 cases without encapsulation (Figure 2), and 16 cases without vascular damage (Figure 3); moreover, the necrosis was not related to the differentiation of tumors, times of TAE or lymphocyte infiltration. 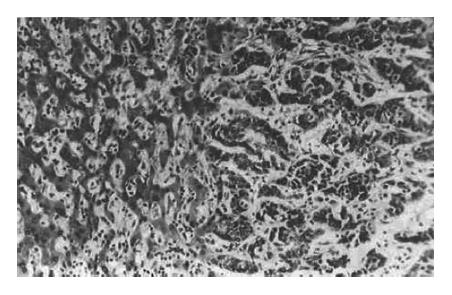 Figure 2 No necrosis of hepatocellular carcinoma without encapsulation. HE, × 50. 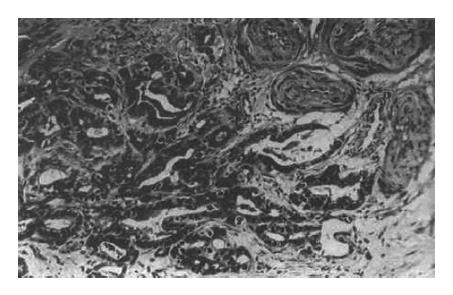 Figure 3 No necrosis of hepatocellular carcinoma even though obvious vascular damage is present. HE, × 50.
DISCUSSION

Since the initial report of TAE treatment for liver neoplasm was published in 1976[1], TAE has been considered a useful therapeutic procedure for HCC[2,3]. However, what happens in the carcinoma tissues after TAE and how to explain recurrence are questions that remain unclear and TAE alone does not constitute a sufficient therapy for HCC. Thus, histological investigation after TAE would be more beneficial for the evaluation of TAE in liver tumors.

It has been proposed in the previous studies that necrosis is related to encapsulation, invasion, satellite nodules, and portal vein blood supply of the tumor[4,5]. Our study has demonstrated that TAE produces a significant necrotic effect, as compared with the non-TAE treated group. All encapsulated HCC with vascular damage after TAE showed obvious necrosis (Figure 4). Conversely, HCC without encapsulation and vascular damage did not show sufficient necrosis after TAE. The main cause of tumor necrosis is related to vascular damage. Histologically, vascular damage presents as endothelium thickened by fibrous tissues, narrowed lumen, increased collagenous tissue in interstitium and occlusive vessels (Figure 5). These morphological changes are considered a result of TAE. Therefore, causing vascular damage in each case after TAE is the key point of TAE therapy for HCC. 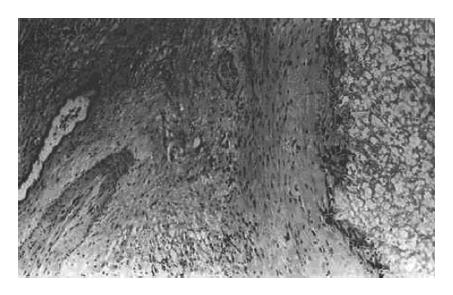 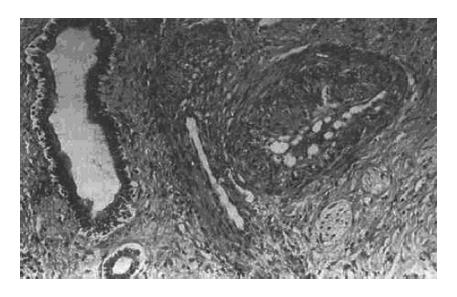 In our study, 5 cases of metastatic neoplasm and 2 cases of cholangiocarcinoma did not show any necrosis; therefore, these types of liver tumor are not indicators for TAE therapy.