Corresponding Author of This Article

AIM: To analyze the relationshio between p53 gene mutations and these parameters including DNA ploidy in Chinese primary gastric cancers.

RESULTS: Mutations were detected in 8 (40%) cases: 2 cases in exon5-6, 2 cases in exon7, 4 cases in exon8. These mutations were detected from stage 0 to stage III. No significant association was found between p53 gene mutations and the clinicopathological parameters such as macroscopic classification, degree of histological differentiation, depth of tumour invasion and lymphonod metastasis. In addition, 66.7% (6 of 9) of aneuploidy tumours had p53 mutations and only 18.2% (2 of 11) of diploid tumours had mutations.

CONCLUSION: These results suggest that p53 gene mutations are related to DNA ploidy alterations and that p53 gene is one of the important tumour suppressor genes in human gastric cancer.

Human gastric cancers represent some of the most frequently occurring tumors worldwide. In China, cancer mortality is the highest among cases of gastric cancers and research on this topic is prevalent, with the latest studies focusing on the genetic changes that support gastric cancer development and progression. Studies of gastric tumors have revealed several genetic alterations. Besides mutations in known oncogenes, such as ras and cerb B2, mutations in tumor suppressor genes, such as p53, have also been reported. However, the relationship between p53 mutations and the histopathological parameters of gastric tumors, such as macroscopic classification, stage, degree of differentiation and depth of tumor invasion, remain unknown. In addition, the role of p53 mutations that are related to gastric tumor parameters within the upcoming integrative approach to patient care involving traditional Chinese and Western medicine has not been investigated.

This study was designed to investigate structural alterations in exons 5 though 8 of the p53 gene in 20 cases of gastric cancer by using PCR-single strand polymorphism (SSCP) analysis, a rapid and sensitive method for detecting mutations and polymorphisms in a given sequence[1]. Ultimately, the SSCPs that were detected were compared with the histopathological parameters of the patients’ gastric tumors and spleen Qi status to understand how to adopt p53 molecular data to the integrative care approach.

Fresh tumor tissues and adjacent normal gastric mucosa were by surgical resection from patients treated for gastric cancer at the Fourth Affiliated Hospital of Hebei Medical University, Shijiazhuang, China. All samples were immediately snap-frozen in ice-cold ethanol upon excision and stored at -80 °C until use in analysis.

Each excised tissue specimen was prepared as a single-cell suspension. After filtration, the nuclei were treated with 0.1% RNase and stained with ethidium bromide. DNA ploidy was determined by DNA flow cytometry using a FACS 420 (Becton-Dickinson Co., United States). The DNA index (DI) was calculated as the relative DNA content using the following formulas: for diploid tumors, DI = 1.0 ± 2cv; for aneuploid tumors, DI ≠ 1.0 ± 2cv (cv ≤ 5%).

Genomic DNA was extracted from each tumor and patient-matched normal gastric mucosa specimen, respectively, by treating with sodium dodecyl sulfate Pronase K and phenol chloroform. PCR-SSCP analysis. Exons 5-6, 7 and 8 of the p53 gene were amplified individually by PCR and presence of mutations was analyzed by the SSCP method. The reaction mixture (total volume, 20 μL) consisted of 300 ng of genomic DNA, 0.5 μL Taq polymerase (Promega, United States), 3.70 MBq (2.5 μCi) 32 PdCYP, exon-specific primer pair (50 pmol/L each; see below), and 125 mmol/L of each deoxynucleotide triphosphate. The PCR amplification was carried out in 30 cycles of 90 s at 94 °C, 90 s at 55 °C, and 120 s at 72 °C. Each completed reaction mixture was diluted 10-fold with formamide-based dye solution (95% formamide, 20 mmol/L EDTA, 0.05% bromophenol blue, and 0.05% xylene cyanol). A 10 μL aliquot of the diluted reaction mixture was then heated for 5 min at 90 °C and resolved by electrophoresis using a 6% neutral polyacrylamide gel containing 5% glycerol (13) and 30 W for 4-6 h at room temperature. The resolved amplicons in the gel were visualized by exposure to X-ray film at -80 °C for 12-24 h.

PCR-SSCP analysis detected p53 gene mutations in gastric cancer specimens from 8 (40%) of the patients (Figure 1; Table 1), with 2 of the mutations located in exons 5-6, 2 in exon 7, and the remaining 4 in exon 8. The 8 tumors represented stages 0 to III. There was no significant correlation found between the PCR-SSCP detected p53 mutations and the clinic-pathological parameters of these tumors, including for the macroscopic classification, degree of differentiation, depth of tumor invasion, and lymph node involvement (Table 2). 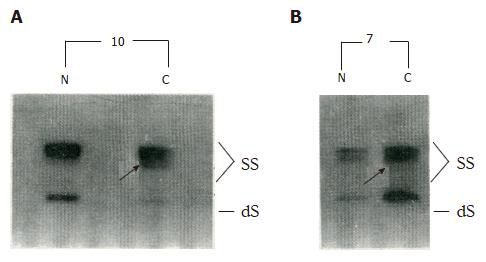 The p53 gene is located on chromosome arm 17p13, and mutation and loss of heterozygosity (LOH) in this genetic sequence have been reported for many types of cancers[2], including colon, brain, ovary, breast, lung and esophagus. The original reports of p53 gene abnormalities generally regarded this event in gastric cancer as a late event[3,4]; however, recent research has suggested involvement at much early stages in tumorigenesis[1,5]. In our current study, p53 gene mutations were commonly detected in gastric cancer specimens of stage 0 to III. Intriguingly, case 10 of our series that presented with a mucinous adenocarcinoma arising from ulcer showed p53 gene mutation. Thus, alterations of the p53 gene may play an important role in the development of gastric cancer, including canceration of an ulcer.

The frequency of p53 mutations in our case series was 40%. This result may be lower than the real figure, however, because we did not attempt to detect mutations in other parts of the p53 gene sequence (i.e. outside of exons 5-8), partly as a limitation of the procedure used, for which the relatively short length of genomic DNA (approximately 200 bp) produces the best effect for observing SSCP. This limitation also represents a particular challenge for the exonic region encompassing exons 5-6, for which the genomic DNA is longer (374 bp) and detecting point mutations may be more difficult and risk of false negative results is higher.

It has been reported that p53 mutation is detected frequently in cases of metastatic gastric cancer but rarely in the primary tumors of gastric cancer[6,7]. However, in the present study, no correlation was found between the presence of p53 mutations and the clinic-pathological parameters, including lymph node metastasis[1,4], so that our data agree with the previous reports. In addition, our study found that p53 mutations mainly occurred in aneuploid tumors, similar to the data reported by Tamura et al[4]. Therefore, we concluded that the p53 gene may fit within the polygene model of gastric cancer and play an important role in regulating the cell cycle during tumorigenesis.

Furthermore, our study found no instance of LOH of the p53 gene, which does not agree with other reports[1,8]. The possible reason for this discrepant finding is that LOH may only be detected by PCR-SSCP when the genomic DNA is strongly heterozygous (3) and the rate of heterozygosity of the p53 gene is reportedly very low. Finally, because the types and loci of p53 gene mutations are not able to be determined by PCR-SSCP analysis, we are preparing to perform sequencing in the next phase of our research on this important topic.