A 70-year-old woman was found to have 2 cystic lesions in the head of the pancreas on abdominal ultrasonography during a routine medical examination. Endoscopic ultrasonography (EUS) and magnetic resonance cholangiopancreatography showed multilocular cysts in the head of the pancreas without dilation of the main pancreatic duct. The patient was followed-up semiannually with imaging studies for suspected branch duct-type intraductal papillary mucinous neoplasm (IPMN). At 3 years after initial presentation, hypoechoic lesions were observed around each pancreatic cyst by EUS. Diffusion-weighted imaging showed high-intensity regions corresponding to these lesions. Therefore, a diagnosis of invasive carcinoma derived from IPMN could not be excluded, and subtotal stomach-preserving pancreaticoduodenectomy was performed. The macroscopic examination of the surgical specimen showed whitish solid masses in the head of the pancreas, with multilocular cysts within each mass. Microscopically, each solid mass consisted of inflammatory cells such as lymphocytes and plasma cells. Furthermore, immunochemical staining revealed immunoglobulin G4-positive cells, and many obliterating phlebitides were observed. The cysts consisted of mucus-producing epithelial cells and showed a papillary growth pattern. Based on these findings, we diagnosed multiple localized type 1 autoimmune pancreatitis occurring only in the vicinity of the branch duct-type IPMN.

Core tip: We herein report a case of localized type 1 autoimmune pancreatitis (AIP) superimposed upon preexisting multifocal intraductal papillary mucinous neoplasms (IPMNs) of the branch duct. Although few reports have shown AIP associated with IPMN, in our case, AIP had developed only around the IPMN, which was under progressive observation. Therefore, the IPMN may have influenced the pathogenesis of AIP.

Autoimmune pancreatitis (AIP) is classified into 2 groups according to the International Consensus Diagnostic Criteria reported in 2011[1]. Type 1 AIP is characterized by the pathological condition termed lymphoplasmacytic sclerosing pancreatitis, whereas type 2 AIP is characterized by idiopathic duct centric pancreatitis. Although the pathogenesis of AIP remains unknown, it is considered to involve certain immune mechanisms. Typical parenchymal imaging features of AIP include diffuse enlargement with delayed enhancement and occasional segmental or focal enlargement. Given these imaging characteristics, distinguishing AIP with focal enlargement (f-AIP) from carcinoma of the pancreas is particularly difficult.

Although intraductal papillary mucinous neoplasm (IPMN) is recognized as a cystic mucus-producing tumor, its association with AIP has not been reported thus far. Herein, we report a rare case of AIP occurring only in the vicinity of IPMN, which was diagnosed during the follow-up examinations for IPMN.

A 70-year-old woman was found to have cystic lesions in the head of the pancreas on abdominal ultrasonography (US) during a routine medical checkup in December 2008. She had no symptoms, and the blood test results were essentially normal. Endoscopic ultrasonography (EUS) and magnetic resonance cholangiopancreatography (MRCP) showed multilocular cysts in the head of the pancreas without dilation of the main pancreatic duct (Figure 1). Diffusion-weighted imaging (DWI) showed no uptake in the pancreas (Figure 2A and B). The patient was followed-up by semiannual imaging studies for suspected branch duct-type IPMN. 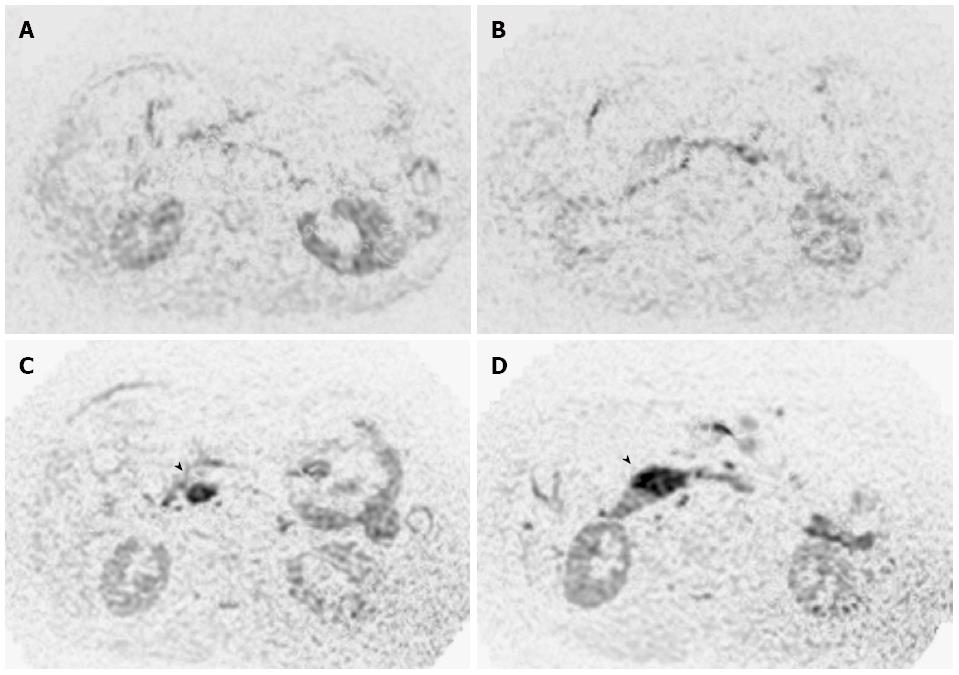 In December 2011, solid lesions were observed in or around both the IPMNs on EUS (Figure 3A and B). DWI showed high-intensity signals corresponding to these lesions (Figure 2C and D), and MRCP showed a reduction in the diameter of the IPMNs (Figure 3C). Contrast-enhanced computed tomography (CT) revealed that these lesions had a lower density than the surrounding pancreatic parenchyma during the pancreatic parenchymal phase and showed iso-density in the equilibrium phases (Figure 4). ERP revealed a normal main pancreatic duct and no communication between the main pancreatic duct and the cystic lesions. The pancreatic juice cytology was negative for malignancy. 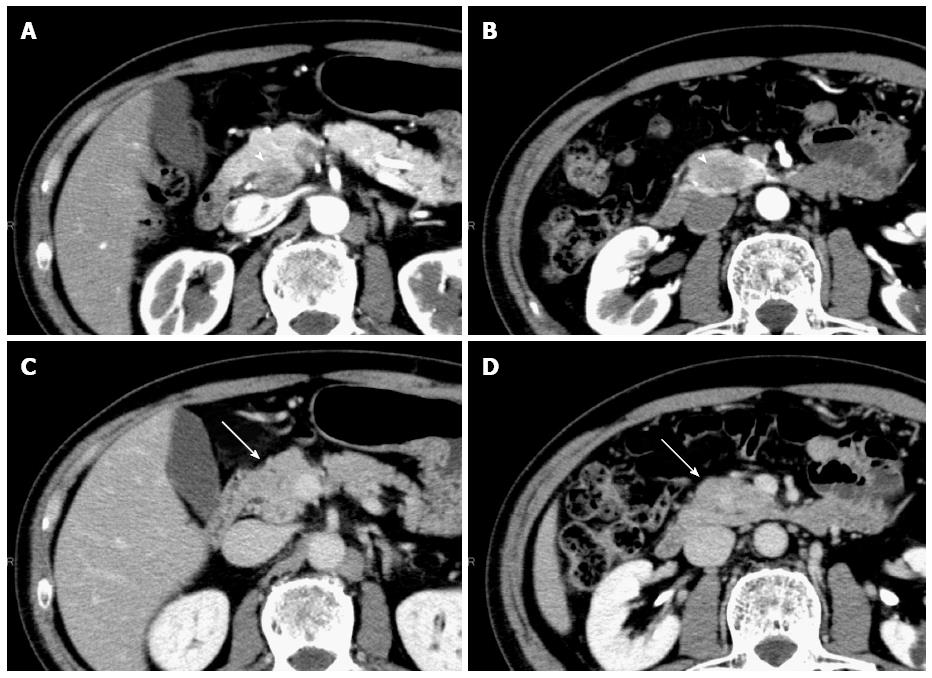 Based on these results, our principal differential diagnoses included inflammatory pseudo-tumors such as AIP; however, the possibility of invasive carcinoma derived from IPMN could not be excluded.

We performed a subtotal stomach-preserving pancreaticoduodenectomy after fully explaining the possibility of malignancy and the risks of the surgery to the patient.

The macroscopic examination of the surgical specimen showed multilocular cysts with 2 whitish solid lesions (Figure 5). The 2 lesions were solitary and indicated no gross continuity with each other. Microscopically, each solid lesion presented a striform pattern consisting of fibroblasts/myofibroblasts mixed with lymphoid follicles and inflammatory cells (Figure 6A), particularly lymphocytes and plasma cells that tested positive for immunoglobulin IgG4 on immunochemical staining (Figure 6B). In addition, many obliterating phlebitides (Figure 6C) were observed. The multilocular cysts demonstrating periductal inflammation consisted of mucus-producing epithelial cells and showed a papillary growth pattern (Figure 6D). The epithelial cells were MUC2-negative and MUC5AC-positive on immunochemical staining. We therefore diagnosed multiple localized type 1 AIP involving only the vicinity of branch duct-type IPMN. 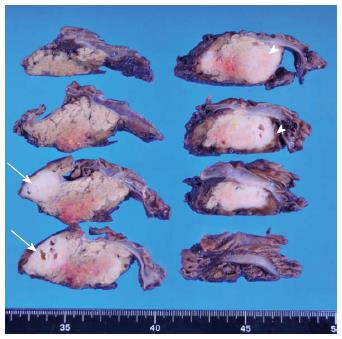 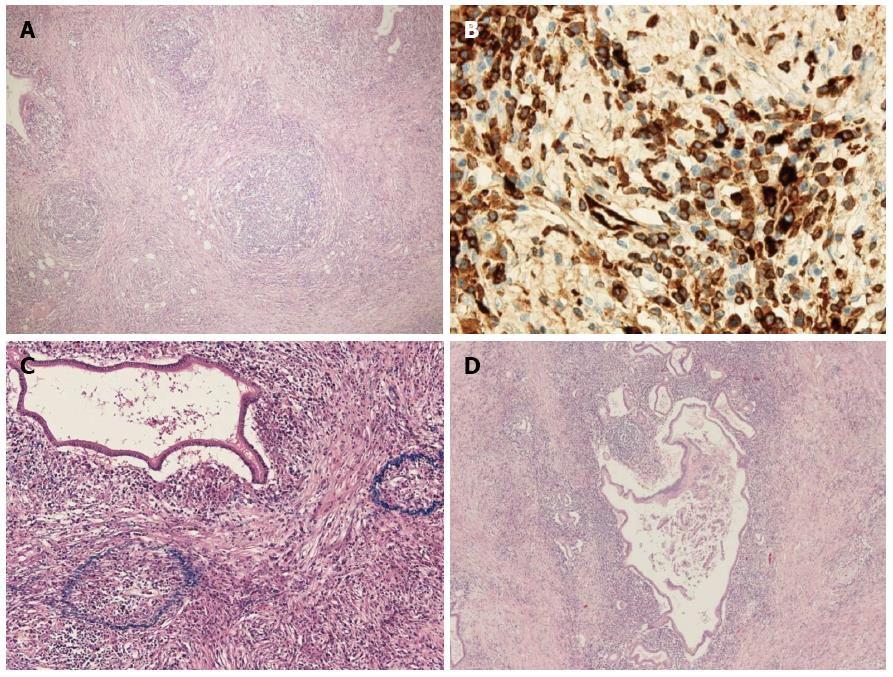 Type 1 AIP is histologically characterized by the following 4 characteristic features: (1) Dense infiltration of plasma cells and lymphocytes, particularly in the periductal regions; (2) Peculiar storiform fibrosis; (3) Venulitis with lymphocytes and plasma cells often leading to obliteration of the affected veins; and (4) Abundant [> 10 cells per high-power field (HPF)] IgG4-positive plasma cells[1]. Our case fulfilled all of these histological features, indicating a diagnosis of AIP.

In diagnostic imaging, typical AIP is characterized by the diffuse enlargement of the pancreas with stenosis of the main pancreatic duct. However, at times, AIP can present as segmental or focal enlargement in the pancreas, and differentiating such cases of f-AIP from pancreatic carcinoma is rather difficult[2]. Although US and EUS show hypoechoic masses in both f-AIP and pancreatic carcinoma, the characteristic findings of f-AIP include hyperechoic foci and lobularity, reflecting an inflammatory tumor environment. In the Rosemont criteria[3], the EUS-based major criteria for the diagnosis of chronic pancreatitis (CP), including AIP, comprise hyperechoic foci with shadowing, calculi in the main pancreatic duct, and lobularity with a honeycomb appearance. The minor criteria for CP include the presence of cysts, dilated ducts ≥ 3.5 mm, irregular pancreatic duct contours, dilated side branches ≥ 1 mm, a hyperechoic duct wall, the presence of strands, non-shadowing hyperechoic foci, and lobularity with noncontiguous lobules. Our case revealed features similar to CP, as the hypoechoic tumor observed within the vicinity of the cystic lesions demonstrated certain characteristic findings of CP, including hyperechoic foci and the presence of strands. However, distinguishing between f-AIP and PC on other imaging modalities may be difficult[2,4-7]. In the present case, the tumor showed high-intensity signals on DWI and delayed enhancement on dynamic CT, although both f-AIP and PC may present similar findings in these types of imaging studies[7,8]. However, simultaneous carcinomatous changes in 2 IPMN lesions are very rare; in such a case, the possibility that such lesions are inflammatory rather than carcinomatous is rather high.

Among other diagnostic methods, Kanno et al[9] reported that EUS-guided fine-needle aspiration (EUS-FNA) with a 22-G needle may provide adequate tissue for histological examination. However, many reports have suggested that the material required to perform a confirmed diagnosis of AIP cannot be obtained with this approach, although EUS-FNA in cases of AIP can eliminate the possibility of carcinoma[10-12]. In our case, we could not perform EUS-FNA because the cyst was located near the puncture site.

The pathogenesis of AIP has not yet been clarified. The involvement of certain immunological mechanisms is suspected due to the presence of autoantibodies, the predominant infiltration of CD4 and CD8 T cells, and the expression of HLA-DR antigens in the pancreas in such cases[13]. In our patient, AIP was restricted to the vicinity of the IPMNs and did not develop in the remaining pancreatic parenchyma. Although this finding suggests that IPMN is related to the pathogenesis of AIP, proving a causal relationship is difficult because few studies have reported an association between these 2 clinical conditions[14]. According to previous reports, Naitoh et al[14] supported the hypothesis in which IPMN appears in the background of AIP. However, in our case, because AIP developed during the progressive observation of IPMN, IPMN may have influenced the pathogenesis of AIP. However, the further examination of such cases of AIP and IPMN for an improved understanding of the relationship between these clinical entities is necessary.