METHODS: Studies and relevant literature comparing the effects of LFT and LCC for colorectal malignancy were identified in MEDLINE, the Cochrane Central Register of Controlled Trials and EMBASE. The complications and re-admission after approximately 1 mo were assessed.

CONCLUSION: LFT for colorectal malignancy is safe and efficacious. Larger prospective RCTs should be conducted to further compare the efficacy and safety of this approach.

Core tip: Fast-track rehabilitation in laparoscopic colorectal resection has become the most fashionable way to treat colorectal malignancy. Complications after fast-track rehabilitation protocol and laparoscopic surgery (LFT) and conventional care strategies and laparoscopic surgery (LCC) of colorectal resection have generally been discussed in China, as well as in other countries. This study clarified that compared with LCC, LFT has fewer complications and has a similar incidence of re-admission after approximately 1 mo.

Fast-track rehabilitation in laparoscopic colorectal resection has become the most fashionable way of treating colorectal malignancy. During the mid-1990s, fast-track rehabilitation, involving dieticians, nurses, surgeons and anesthesiologists, was developed by Kehlet et al[1,2], Wilmore et al[3] and Basse et al[4]. Common to the other enhanced recovery rehabilitations, it is an attempt to reduce the stress response, decrease complications, speed up recovery, shorten the hospital stay and reduce health costs, all without compromising patient safety. The laparoscopic approach to colorectal surgery has been shown to accelerate dietary intake and return of bowel function[5], to facilitate postoperative mobilization[6], to reduce the length of stay in hospital[5,7] and to have a positive effect on postoperative mortality[5,7-9].

Recently, laparoscopic surgery has been generally applied in the treatment of gastrointestinal cancer, which can significantly attenuate trauma and accelerate the rehabilitation of patients after surgery. It was reported that the hospital stay time is shorter and the complication and readmission rate are lower after laparoscopic surgery[10,11].

Despite all the major benefits of laparoscopy, elective colorectal resection is still associated with a morbidity rate between 20% and 30% and a postoperative hospital stay of 7-10 d[12]. Both laparoscopic surgery and FT perioperative care have been reported to be safe and effective, and to result in a shorter hospital stay with earlier recovery of gastrointestinal function[13-16] and lower morbidity than open colorectal surgery and standard care[17-19]. Many recently published randomized controlled trials are available that have compared fast-track rehabilitation to conventional care in laparoscopic colorectal resection for colorectal malignancy. The safety after fast-track rehabilitation protocol and laparoscopic surgery (LFT) of colorectal resection has generally been discussed; therefore, this study analyzed and compared the complications and re-admission between LFT and conventional care strategies and laparoscopic surgery (LCC). The primary aim of this meta-analysis was to evaluate LFT vs LCC; the secondary aim was to assess LFT.

PubMed, the Cochrane Central Register of Controlled Trials and EMBASE were searched for all relevant literature, including articles referenced in the publications. The medical subject headings (MeSH) and keywords collected for individually and in combination were as follows: “laparoscopic surgery”“open surgery” and “fast track” or “enhanced recovery” and “colorectal”. The last search was done on May 10th, 2013. References, lists of retrieved articles, reviews and meta-analyses were then scanned for additional articles. Internet search engines were also used to perform a manual search for abstracts from international meetings, which were then downloaded and studied.

The inclusion criteria were as follows: (1) randomized controlled trials; (2) studies that provided information on at least one of the outcome measures; (3) studies published in English. When a study reporting the same patient cohort was included in several publications, only the most recent or complete study was selected; and (4) detailed patient information provided. The exclusion criteria were as follows: (1) case reports; (2) articles that were not full text, or non-comparative studies; and (3) open operations, not by laparoscopic surgery.

The inclusion criteria were met in studies if they involved LFT for colorectal malignancy in adult patients (i.e., those 18 years and older) and used LCC as a control. All studies that used chemotherapy, or a rehabilitation protocol had to include less than seven of the seventeen FT items among the interventions in the FT group (programs using epidural or local anesthesia, minimally invasive techniques, optimal pain control and aggressive postoperative care) to achieve early recovery after colorectal surgery; and more than two of the conventional care strategies were included, were excluded. Studies that could not provide actual frequencies of complications or re-admission after approximately 1 mo were also excluded. Both full-length publications and abstract publications were selected. Letters, reviews without original data, non-English papers and animal studies were excluded. If any doubt regarding the suitability remained after the abstract was examined, the full manuscript was obtained.

All included studies were assessed for the quality of their methodology and relevance to the objective of our meta-analysis. Conduct and reporting were in accordance with the QUOROM statement. Data on complications or re-admission approximately 1 mo from each trial were extracted and compared independently by the two investigators.

In statistical analysis, Review Manager (RevMan) software version 5.0.0 was used (The Nordic Cochrane Centre, The Cochrane Collaboration, Copenhagen, Denmark). A pooled RR and a pooled Mean Difference with 95%CI were used to assess the outcomes of the studies. Statistical heterogeneity was tested by the χ2 test. According to the forest plot, heterogeneity was limited, so the Mantel-Haenszel fixed effect model was adopted. The significance of the pooled RR was determined by the Z test and statistical significance was considered at P < 0.05. Publication bias was estimated by the use of a funnel plot with an Egger’s linear regression test, and funnel plot asymmetry on the natural logarithm scale of the RR was measured by a linear regression approach.

A total of 439 references were identified from medical journal databases. Upon examination of the abstracts, 409 articles were rejected based on the rejection criteria outlined in Figure 1. A study of the complete manuscripts for the 30 remaining articles led to elimination of 14 papers that contained no data pertaining to the outcome of LFT for colorectal resection, four papers not in English and six papers explaining the effect of analgesia. The remaining six non-duplicated randomized controlled trials (RCTs) that compared LFT with LCC were included in the meta-analysis. 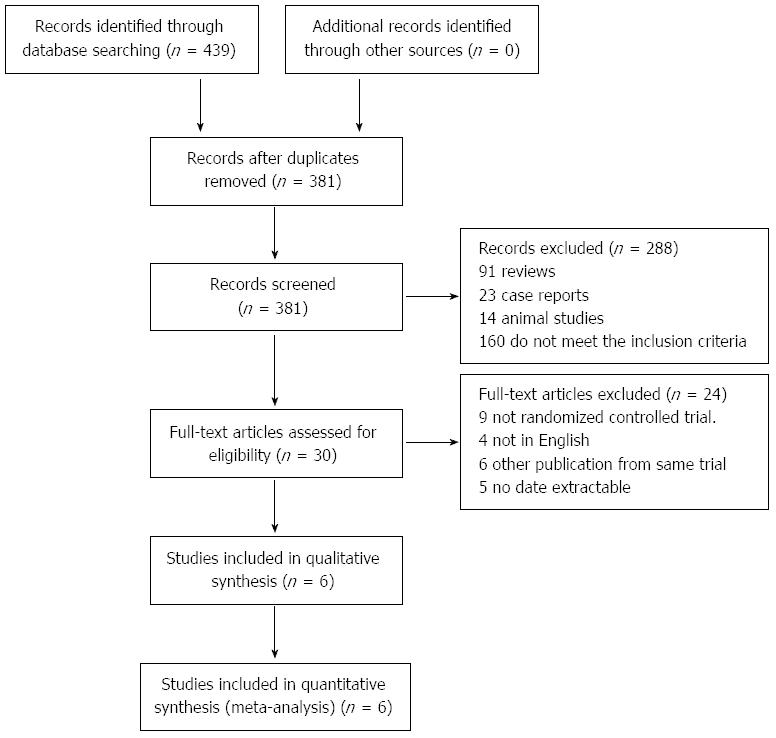 Figure 1 Selection of studies.
Characteristics of the selected RCTs

Characteristics of the six RCTs[20-25] included in the meta-analysis are summarized in Table 1. These studies were published between 1985 and 2013 and investigated a total of 665 patients: 323 received LFT and 332 received LCC. 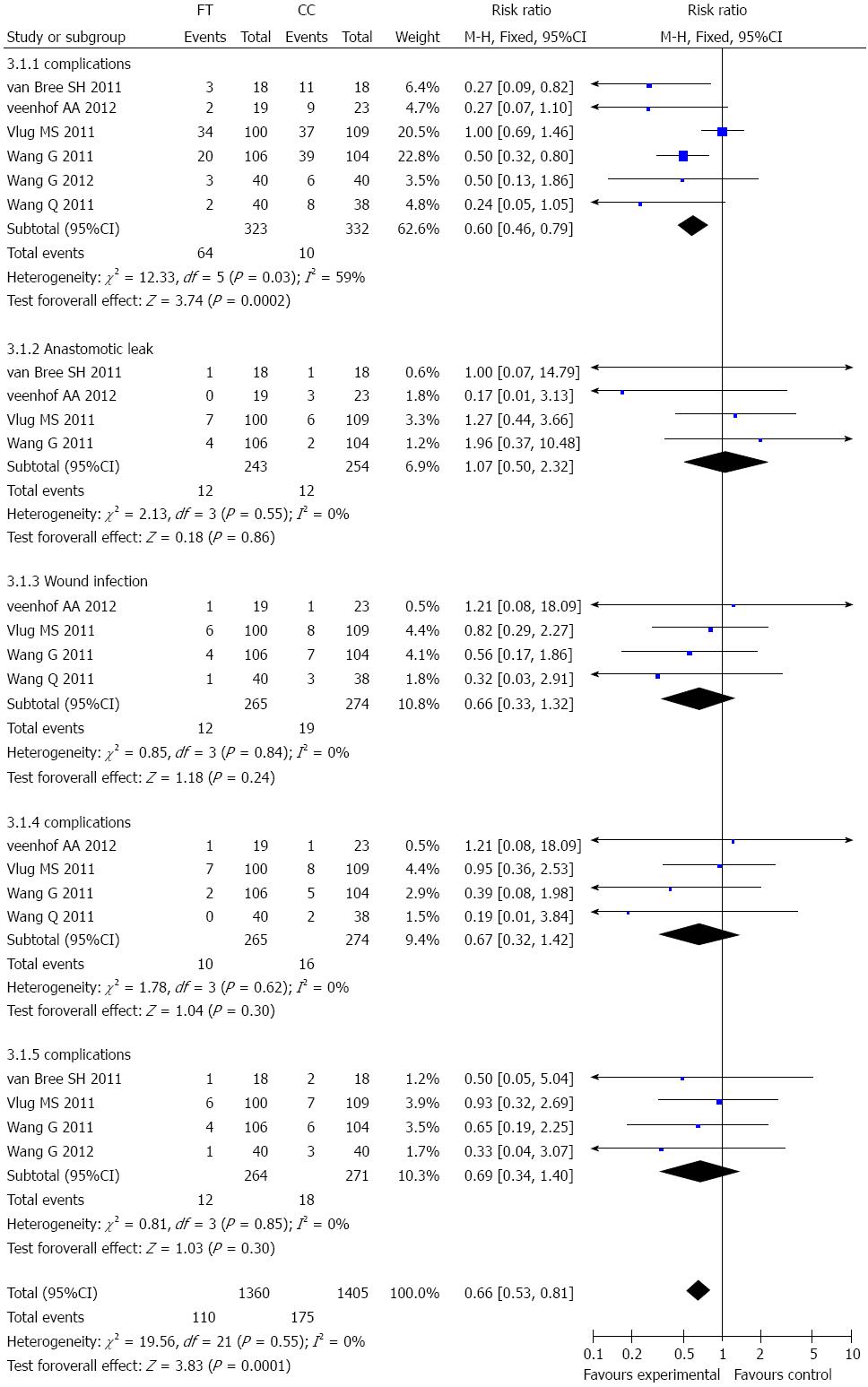 Funnel plots were created to access the publication bias of the literature. The shapes of the funnel plots did not show any obvious asymmetry (Figure 3). 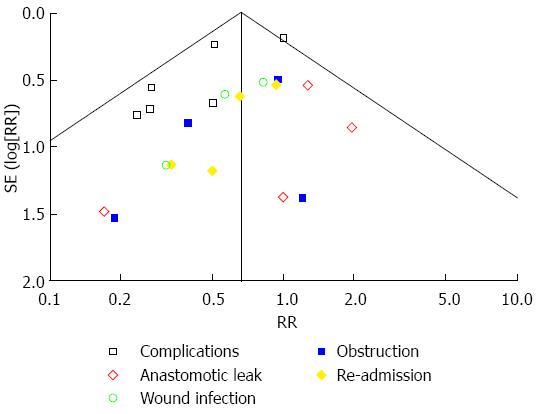 The straightforward conclusion from the six included studies is that LFT is a more reliable treatment for colorectal malignancy, compared with LCC. LFT reduced complications, but carried similar risks of anastomotic leak, wound infection, obstruction and re-admission.

Complications after LFT and LCC of colorectal resection have generally been discussed in China, as well as in other countries. A recently published multivariate analysis identified male gender[26], preoperative education, anesthesia[27] and early postoperative oral nutrition[28] as potential risk factors for complications after colorectal surgery. In addition, some studies have found an increased risk of anastomotic leaks in males, which is consistent with the results of this study (10.1% of the men required re-operation for anastomotic leak vs 3.3% of the women)[29-32].

Better cooperation of patients can bring better outcomes of LFT. Generally, since the gastric emptying time of solid meal and fluid are 6 and 2 h, respectively[33], the patients should be encouraged to have liquid meal 2 h before the operation instead of fasting. It has been shown that preoperative oral carbohydrate is safe and can efficiently reduce complications[34-36].

The role of epidural anesthesia or regional anesthesia in LFT should be stressed. Postoperative epidural analgesia can avoid stress-induced neurological, endocrinological and homeostatic changes or the blocking of sympathetic nerve-related surgical stress response, reduce complications such as nausea, vomiting and enteroparalysis after operation, promote early ambulation, improve the intestinal function and shorten the hospital stay time of patients after resection of colorectal cancer[26,37-42].

Early postoperative oral nutrition is regarded as an essential part of LFT. Food intake can stimulate gastrointestinal peristalsis, and early feeding during the first 24 h after surgery promotes the recovery of an obstruction. It has been illustrated that early postoperative oral nutrition attenuates catabolism and potentially decreases infectious complications[27,43].

Several studies have shown that American Society of Anesthesiologists grade III or higher is associated with increased postoperative morbidity[44-46].

LFT can improve the rehabilitation of patients after resection of colorectal cancer better than LCC, thus benefiting their surgery, anesthesia, pain management, physical therapy and social work. The primary work of LFT is the preoperative education of patients to make them understand the whole plan and the aim of each stage. Therefore, it is vital to obtain cooperation from the nursing staff.

However, we should still regard these outcomes with caution and evaluate them critically for the following reasons. Firstly, although there was no detectable publication bias, as tested by the funnel plots, the overall methodological quality and reporting of the included studies were poor. Secondly, the number of studies found was relatively low, and the aforementioned quality issues may have biased the results signiﬁcantly. Therefore, more large trials with better separation between LFT and LCC for colorectal malignancy seem necessary. Furthermore, in light of current evidence, LFT should not yet be considered the new standard for colorectal malignancy. Long-term data on outcome, as well as important other factors in making a decision for an intervention, are also lacking. Quality of life data and data on physiological performance after 5 years have never been described, nor have data on cost-effectiveness or economic evaluations of LFT. These parameters may play an important part in recommending LFT treatment in colorectal resection. However, we believe that, with greater awareness and the increasing popularity of LFT, more long-term follow-up reports will eventually be published.

There have been eight previously published systematic reviews, including meta-analyses on this topic[16,17,47-52]. These included three reviews of controlled clinical trials and randomized controlled trials[17,47,49], and five reviews of randomized controlled trials only[47,50-52]. The present study is the first meta-analysis to compare fast-track rehabilitation with conventional care in laparoscopic colorectal resection for colorectal malignancy. This also the first meta-analysis of patients undergoing elective colorectal surgery to demonstrate that LFT is associated with a significant reduction in postoperative complications, but no significant reduction in readmission rates. The increased number of included studies supported the quality of the evidence from the present study.

In conclusion, this meta-analysis demonstrated that LFT is safe and feasible for colorectal surgery. As LFT comes into even wider use, additional large, prospective RCTs should be conducted to further compare the efficacy and safety of this approach.

Over the past three decades, many studies have assessed the performance of LFT. However, comparisons of LFT and LCC have not been published.

Based on this meta-analysis, LFT for colorectal malignancy is safe and efficacious. Similar associations were indicated in subgroup analyses of East Asian, Western, cohort, and high-quality studies. These findings were not presented clearly in previous systematic reviews.

LFT appears to be neither directly nor indirectly associated with risk. Further studies should seek to clarify this conclusion.

LFT is rapidly becoming the focal point of attraction for specialists worldwide. This article shows the advantages of the procedure. This analysis has great practical value for clinicians.