METHODS: Patients admitted to our tertiary center due to suspected acute appendicitis constituted the study group. Patients were divided into two groups. appendicitis group (Group A) consisted of patients who underwent appendectomy and were histopathologically diagnosed with acute appendicitis, and non-appendicitis group (Group N-A) consisted of patients who underwent negative appendectomy and were diagnosed with pathologies other than appendicitis and patients that were followed non-operatively. The operative findings for the patients, the additional analyses from follow up of the patients and the results of those analyses were recorded using the follow-up forms.

CONCLUSION: The Ohmann and RIPASA scoring systems had the highest specificity for the diagnosis of acute appendicitis.

Core tip: Several scoring systems have been devised to aid decision making in doubtful acute appendicitis cases, including the Ohmann, Alvarado, Eskelinen, Raja Isteri Pengiran Anak Saleha Appendicitis and several others. These scores utilize routine clinical and laboratory assessments and are simple to use in a variety of clinical settings. However, differences in sensitivities and specificities were observed if the scores were applied to various populations and clinical settings, usually with worse performance when applied outside the population in which they were originally created.

Acute appendicitis is a common surgical condition that requires prompt diagnosis to minimize morbidity and avoid serious complications. Accurate identification of patients who require immediate surgery as opposed to those who will benefit from active observation is not always easy[1].

Several scoring systems have been devised to aid decision making in doubtful cases, including the Ohmann, Alvarado, Eskelinen, Raja Isteri Pengiran Anak Saleha Appendicitis (RIPASA) and several others[2-5]. These scoring systems utilize routine clinical and laboratory assessments and are simple to use in a variety of clinical settings. However, differences in sensitivities and specificities were observed if the scores were applied to various populations and clinical settings, usually with worse performance when applied outside the population in which they were originally created[2,3,6]. Additionally, geographic variation of the incidence and clinical pattern of the differential diagnosis of acute abdominal pain may impair their applicability[7]. Accurate diagnosis of acute appendicitis is especially difficult in women, where the inaccuracy of available diagnostic methods leads to an unacceptably high negative appendectomy rate due to gynecological disorders that frequently mimic appendicitis[8].

This study aimed to assess the reliability and practical applicability of the widely used Alvarado, Eskelinen, Ohhmann and RIPASA scoring systems in patients with suspected acute appendicitis.

This prospective study was approved by the local Institutional Review Board (ANEAH 2011/2). Written informed consent was obtained from all subjects. Patients admitted to our tertiary center due to suspected acute appendicitis between October 2011 and March 2012 constituted the study group.

Patient data including age, gender, height, weight, the duration of hospital stay, accompanying disease history, operation or follow-up findings, and laboratory and imaging findings were recorded. Parameters from the Alvarado, Eskelinen, Ohmann and RIPASA scoring systems were combined in this form[2-5]. Decisions regarding operation and follow up were given according to the preferences of the surgeon, not the scoring results.

The scores were calculated using an automated Microsoft Excel sheet after the patients were discharged. Calculated values were recorded as having a low, medium or high probability for acute appendicitis (Table 1). Operative findings, additional analyses of follow-up patients and the results of those analyses were recorded using the follow-up forms. A diagnosis of appendicitis was given macroscopically during the operation (purulent formations, and edematous- necrotic changes on the appendix wall). The results were confirmed with histopathological findings.

The data were analyzed using the Statistical Package for Social Sciences 19.0 for Windows (SPSS Inc., Chicago, IL, United States) and Medcalc (Mariakerke, Belgium) for Windows. The results for all of the items were expressed as the mean ± SD, assessed within a 95% reliance and at a level of P < 0.05 significance. The sample size calculation was based on a significance level of 0.05. We needed a sample of 103 patients to achieve 80% power. A normal distribution of the quantitative data was checked using the Kolmogorov-Smirnov test. Parametric tests were applied to the normally distributed data and non-parametric tests were applied to data with a questionably normal distribution. An independent sample t test and Mann-Whitney U test were used to compare the independent groups. Receiver operating characteristic curves were used to identify the optimal cut-off points. Cross tables were prepared for sensitivity, specificity, positive predictive value (PPV), negative predictive value (NPV), and the diagnostic accuracy values of the scoring systems. We used a χ2 test to compare categorical measures regarding the diagnosis of acute appendicitis.

Regarding patient symptoms, there was no similar pain history among the 64 patients that were diagnosed with acute appendicitis, while 13 patients had a similar pain history. It was found that not having a similar pain history was statistically significant for acute appendicitis (P < 0.001). The studied groups differed significantly from each other with regard to the starting point of pain (P = 0.021) and relocalization of the pain to the lower right quadrant (P = 0.020). As for the examination findings, the defense-rigidity, rebound, and Rowsing findings differed significantly between the groups (P < 0.001, P < 0.001, and P = 0.034, respectively). Fever was also significantly different between the groups (P = 0.015). As for the laboratory results, the neutrophil rate, leukocyte count, and urine analysis results differed significantly between the groups (P = 0.001, P = 0.009, and P < 0.001, respectively) (Table 2). The operative and follow-up results for the patients were as follows: phlegmonous in 45 patients, catarrhal in 15 patients, gangrenous in 11 patients, vermiformis (negative appendectomy) in 11 patients, and perforated in six patients. 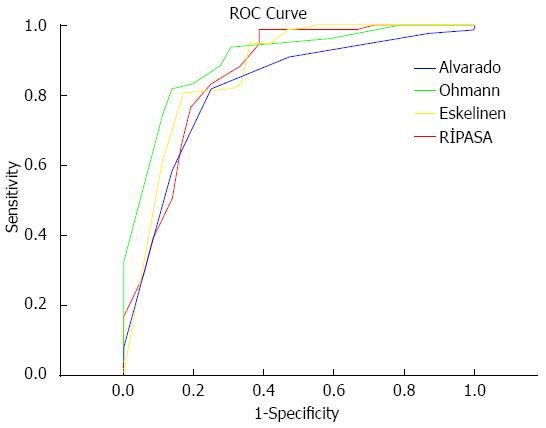 According to previous publications, the criteria for diagnostic quality have been postulated as a 15% rate of negative appendectomies, a 10% rate of negative laparotomies, a 35% rate of potential perforations, a 15% rate of overlooked perforations and a 5% rate of overlooked acute appendicitis[9,10]. Although the negative appendectomy rate reported by surgeons advocating early surgical intervention in suspected cases to prevent perforation varies between 20% and 40%, the generally accepted negative appendectomy rate is approximately 15%-20%[11-13]. Furthermore, misdiagnosis and late surgical intervention leads to complications with high morbidity and mortality, such as perforation and peritonitis. In the present study, 83.2% of the patients underwent surgery, while 16.8% were followed non-operatively. Of the patients who underwent surgery, 81.9% were histopathologically diagnosed with acute appendicitis, 6.38% were diagnosed to have pathologies other than appendicitis, and 11.71% underwent a negative appendectomy.

Non-surgical pathologies can be found on physical examination and laboratory analyses in 20%-25% of the cases presenting with acute pain in the lower right quadrant, and these cases can be followed using conservative methods[16,17]. Furthermore, 5%-15% of cases with suspected acute appendicitis cannot be diagnosed despite an aggressive work-up[18]. In the present study, the rate of patients who could be followed non-operatively was 21%. The rate of patients with symptoms that receded clinically was 5%.

The idea of improving the diagnostic accuracy simply by assigning numeric values to defined signs and symptoms has been the goal of some of the scores that were previously described[1-5]. The parameters comprising the score usually include general signs of abdominal illness (e.g., type, location and migration of pain, body temperature, signs of peritoneal irritation, nausea, vomiting, etc.) and routine laboratory findings (leukocytosis)[19]. Ohmann et al[3] performed a multivariate analysis, and of the initial 15 parameters, eight were included in a regression model, resulting in different values being attributed to each parameter. Originally, it was proposed that patients with scores less than six should not be considered to have appendicitis. However, patients with scores of six or more should undergo observation, and those with scores of 12 or more should proceed to immediate appendectomy[3]. The Eskelinen score delivered acceptable clinical results after calibration to a cut-off value of 57[5]. The Alvarado score is widely used for the diagnosis of acute appendicitis. The score is calculated over 10 points, and a score higher than six is indicative of acute appendicitis. On the other hand, a score of less than four indicates that it is unlikely that the patient has appendicitis. For scores of 4-6, follow-up or imaging with computerized tomography is recommended[4]. Chaudhuri et al[20], in their series of 175 patients with a mean age of 30 years, reported a negative cut-off point of five. The RIPASA score is a relatively new diagnostic scoring system and has been shown to have a significantly higher sensitivity, specificity and diagnostic accuracy[2,21]. The RIPASA score is easy to apply and includes several parameters that are absent in the Alvarado score, such as age, gender and the duration of symptoms prior to presentation[22,23]. Our study calculated the sensitivity and specificity of the Alvarado scoring system as 82% and 75%, respectively, and calculated the sensitivity and specificity of the RIPASA scoring system as 100% and 28%, respectively. Although the diagnostic accuracy levels of these two scoring systems were comparable, the RIPASA scoring system is considered less accurate because of the higher negative appendectomy rates. The negative appendectomy rate calculated in our study was 12%. When the accuracy measures of all of the scoring systems included in our study were analyzed, they performed better, especially if the cut-off values were increased. A higher cut-off value leads to 100% sensitivity and a negative predictive value for the RIPASA and Eskelinen methods and leads to 96% sensitivity with an 83% negative predictive value for the Ohmann method. When these values are assessed, it is found that the Ohmann and Eskelinen methods are one step ahead in terms of detecting appendicitis, although they fail to meet expectations in terms of specificity. The disadvantage of the Eskelinen scoring system is the practicality of calculations because values in this system are decimals, and in other systems they are integers.

The main limitation of our study is the relatively small number in our series. In addition, some details regarding the history and factors that may influence the outcome may not have been completely documented. Due to these restrictions, associations should be interpreted with caution.

In conclusion, the Ohmann and RIPASA scoring systems have the highest specificity for the diagnosis of acute appendicitis.

To assess the reliability and practical applicability of the widely used Alvarado, Eskelinen, Ohhmann and RIPASA scoring systems in patients with suspected acute appendicitis.

The Ohmann and RIPASA scoring systems have the highest specificity for the diagnosis of acute appendicitis.

Accurate identification of patients who require immediate surgery as opposed to those who will benefit from active observation is always useful.

The Alvarado, Eskelinen, Ohhmann and RIPASA are common scoring systems that are used in patients with suspected acute appendicitis.

This study is a prospective one and was conducted over 5-mo period and managed to recruit 113 patients (62 males and 51 females); 94 patients underwent surgery. This could be the first study comparing the four scoring systems in term reliability in diagnosing appendicitis.