CONCLUSION: EUS elastography is a valuable method for the differential diagnosis between PDAC and PIM. And a preferable diagnostic standard should be explored and improvements in specificity are required.

Core tip: Pancreatic inflammatory masses (PIM) are easily confused with pancreatic ductal adenocarcinoma (PDAC). Endoscopic ultrasound (EUS) elastography is a promising noninvasive method for differentiating between PDAC and PIM and may prove to be a valuable supplemental method to EUS-guided fine-needle aspiration.

Pancreatic cancer is a highly lethal disease, and approximately 90% of pancreatic tumors are pancreatic ductal adenocarcinoma (PDAC) which has an extremely poor prognosis[1,2]. The 5-year survival rate of PDAC is as low as 0.2%[3]. The only potentially curable treatment which is surgical resection, relies on early diagnosis[4]. Pancreatic inflammatory masses (PIM) are confused with PDAC[5]. The differential diagnosis between PDAC and PIM is currently still difficult due to non-specific symptoms, signs or imaging presentations[6].

Endoscopic ultrasound (EUS) elastography is a recently developed technique for the differential diagnosis of benign and malignant pancreatic masses and measures the mechanical properties of tissues[7-14]. The tissue elasticity modulus is represented by a transparent color superimposed on the conventional gray-scale B-mode scans. The nature of the tissue is analyzed either by a qualitative method where blue-predominant represents malignancy or a quantitative method where a value of more than 175 represents malignancy.

Studies were selected according to the inclusion and exclusion criteria which were delineated prior to the literature search. The inclusion criteria were: (1) diagnostic clinical trials assessing the accuracy of EUS elastography for differentiating between PDAC and PIM; (2) cytology of EUS-guided fine-needle aspiration (FNA) samples, histopathology of surgical specimens or a follow-up period of at least 6 months as a reference standard; and (3) sufficient data to construct a 2 × 2 table for true-positive, false-positive, false-negative and true-negative findings.

Studies were excluded if they met the following criteria: (1) studies without complete data available for constructing a 2 × 2 table for true-positive, false-positive, false-negative and true-negative findings; (2) studies updated or duplicated; (3) studies which did not report their own data such as editorials, reviews, corresponding letters; and (4) case reports.

Using the Medline, Embase, Web of Science, and Cochrane Central Trials databases up to Dec. 2012, a systematic literature search was conducted. The search strategy was (“elastogram” or “elastography” or “elastosonoendoscopy” or “sonoelastography”) and (“pancreatic” or “pancreas” or “adenocarcinoma” or “inflammatory mass”). To expand the search, we also performed a manual search of abstracts presented at the United European Gastroenterology Week (UEGW) congresses and the American Digestive Disease Week (DDW) from 2000 to 2012. The bibliographies of each peer-reviewed paper were screened for other potentially relevant studies. If missing data were needed, we contacted the appropriate authors by mail.

Data on the differentiation between PDAC and PIM were extracted. The Cochrane Q test was used to assess heterogeneity with a P value < 0.10[15]. I2 was used to describe the percentage variability attributable to heterogeneity rather than sampling errors. I2 > 25% indicated the presence of heterogeneity. The Spearman ρ between the logit of sensitivity and logit of 1-specificity was calculated to assess the presence of a threshold effect. A strong correlation (Spearman ρ < -0.4) suggested the presence of a threshold effect[16]. The source of heterogeneity, with the exception of the threshold effect, was explored by meta-regression analysis[17,18]. The subgroups were predefined, and included diagnostic standard (color pattern vs hue histogram), blind (yes vs unclear), sample size (≥ 50 vs < 50), type of publication (full text vs abstract), and design of study (single center vs multicenter). A P value < 0.05 indicated significance. Pooling was only conducted within the homogeneous groups using the fixed-effect model (Mantel-Haenszel method[19]). Pooling the results with corresponding 95%CI included sensitivity, specificity, positive likelihood ratio (LR), negative LR and diagnostic odds ratio (DOR).

In order to analyze the presence of publication bias, funnel plots were constructed using the Harbord[20] and Egger indicator and Begg[21] and Mazumdar indicator. Asymmetric funnel plots or a P value < 0.1 suggested the presence of publication bias. The quality of the selected studies was assessed using the Quality Assessment of Diagnostic Accuracy Studies (QUADAS) questionnaire[22]. Items were rated as yes, no, or unclear.

The initial literature search identified a total of 147 studies (Figure 1). Of these 147 studies, 25 potentially relevant studies were retrieved for further evaluation. Ten studies involving 781 patients were finally included in this meta-analysis. The baseline characteristics of the selected studies are listed in Table 1. Nine studies were published as full texts, and 1 as an abstract. Seven studies used the color pattern as the diagnostic standard, while the other three used the hue histogram value. 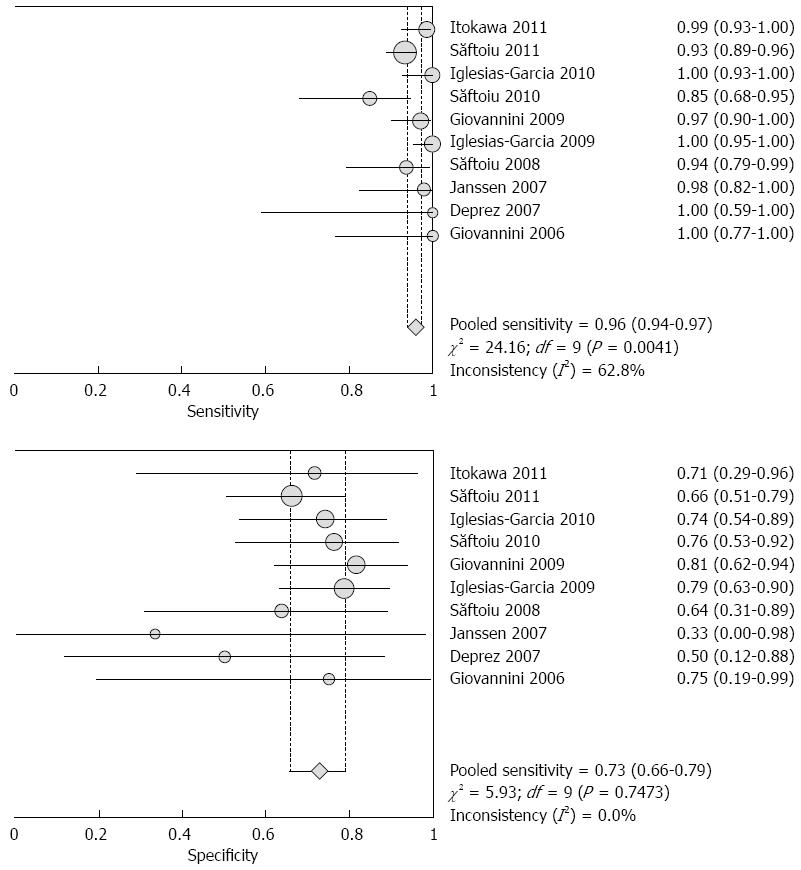 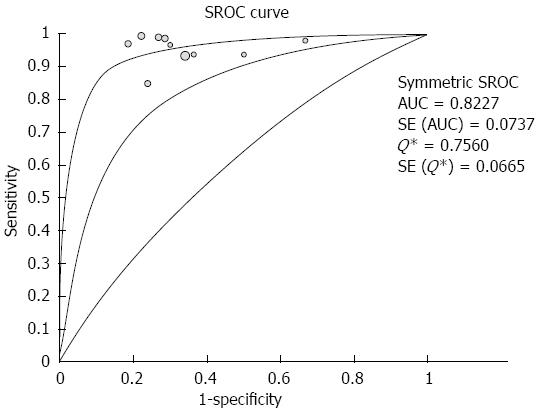 Meta-analysis based on diagnostic standards

The quality of the selected studies according to the QUADAS questionnaire is shown in Figure 4. The overall quality of the studies was good. Eight studies were rated as “yes” in all items. In the study by Janssen et al[9] all selected patients were referred for EUS-guided FNA or surgery and one of the selected patients was diagnosed with lipoma by CT densitometry without histological proof. As a result, QUADAS question 1, 5 and 6 were rated as “no”. In addition, Jassen et al[9] and Itokawa et al[24] did not mention whether blinding was used in their study. As a result, QUADAS question 11 was rated as “unclear”. 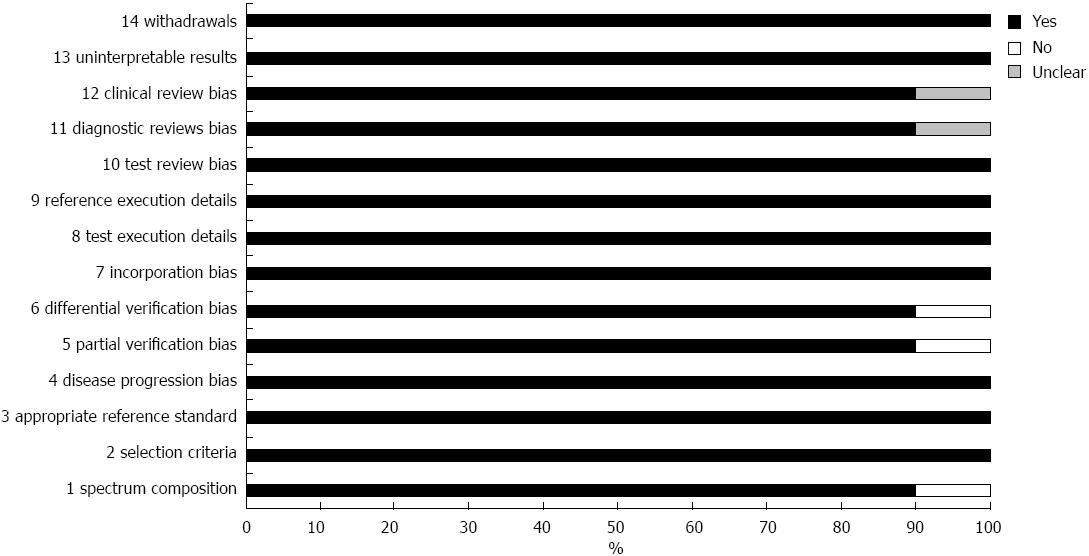 Figure 4 The Quality Assessment of Diagnostic Accuracy Studies scores of the selected studies are summed up per item and presented in a bar chart.
Publication bias 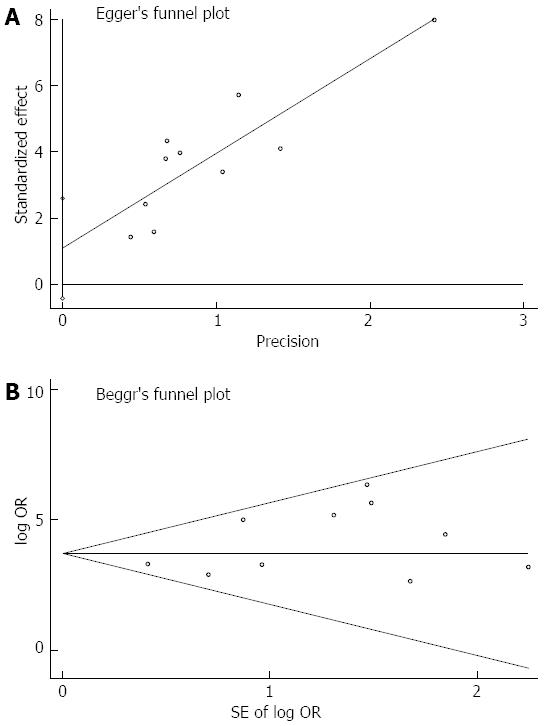 Pancreatic cancer is the fourth leading cause of cancer-related death in the USA, and the second among gastrointestinal tumors[25]. Early diagnosis may allow patients to receive the only potentially curable treatment which is surgical resection. PDAC is found in more than 90% of patients with pancreatic cancer and most of the lesions confused with PDAC are benign PIM[5]. PDAC is frequently associated with secondary inflammatory changes caused by obstruction of the pancreatic duct. In addition, chronic pancreatitis can markedly increase the risk of PDAC[26]. As a result, the differential diagnosis between PDAC and PIM is essential for clinical decision-making.

Despite considerable advances in imaging techniques, the diagnosis of PDAC, particularly in the setting of chronic pancreatitis, remains a challenge. There are no characteristic findings to differentiate pancreatic masses on transabdominal ultrasound (TAS) and its accuracy is very low[27]. Computed tomography (CT) and magnetic resonance imaging (MRI) may be used for staging and detecting metastasis, however, these techniques have limited ability in differentiating between PDAC and PIM[28,29]. Endoscopic retrograde cholangiopancreatography (ERCP) has an increased risk of complications, the most important being pancreatitis[30].

EUS, which provides high-resolution images of the pancreas, has become an indispensable tool in the management of pancreatic diseases. However, an important limitation of EUS examination is its low capacity to determine the exact nature of pancreatic masses[31]. EUS-FNA allows pathological diagnosis. It is currently considered an accurate and safe method for the diagnosis of pancreatic disease. However, EUS-FNA is an invasive procedure and the sensitivity of EUS-FNA is less than 75% in the presence of coexistent chronic pancreatitis or “pseudotumoral” pancreatitis[32,33].

EUS elastography is a newly developed technique which assesses the mechanical properties of tissues during conventional EUS examination. In this meta-analysis, no significant publication bias was detected using the Harbord-Egger and Begg-Mazumdar indicators. The meta-regression analysis demonstrated that the different diagnostic standards used in the included studies may be the source of heterogeneity. This meta-analysis indicated that EUS elastography could achieve a very high sensitivity and a moderate specificity for differentiating between PDAC and PIM. As EUS elastography showed good sensitivity it may be an appropriate method for monitoring patients with PIM in whom malignancy has been excluded. In addition, it could also be used to follow patients with PDAC after surgery.

The pooled specificity of EUS elastography may not be satisfactory for differentiating between PDAC and PIM compared with the 100% specificity of EUS-FNA. This may be due to the following reasons: first, diagnostic studies preferred maximal sensitivity in order to reduce the false negative rate when setting up the cutoff value. This reduced the specificity of individual studies. Second, this study focused on the differentiation between PDAC and PIM. The data from normal controls and chronic pancreatitis patients without focal masses, which could easily be excluded from malignancy by EUS elastography, were excluded from this study. This would markedly reduce the number of true negative cases, and thereby decrease specificity.

As an imaging method with moderate specificity, EUS elastography could not replace EUS-FNA which provides a pathological diagnosis. However, it may be a valuable supplemental method to EUS-FNA. EUS elastography and FNA could be performed sequentially during the same EUS procedure. It could be used to guide FNA to reduce the number of false negative cases, especially in patients with coexisting pancreatitis. Moreover, EUS elastography may provide additional information for differentiating between PDAC and PIM when a negative EUS-FNA result is obtained or the patients are unsuitable for FNA.

There were some limitations in this meta-analysis. One of the selected studies was published as an abstract, and some details were not available. A small number of studies were included in this study which may have reduced the power of the analysis.

In conclusion, EUS elastography is a valuable method for the differential diagnosis between PDAC and PIM. And a preferable diagnostic standard should be explored and improvements in specificity are required.

Endoscopic ultrasound (EUS) elastography is a recently developed technique for the differential diagnosis of benign and malignant pancreatic masses and measures the mechanical properties of tissues. The overall accuracy of EUS elastography in differentiating between pancreatic ductal adenocarcinoma (PDAC) and pancreatic inflammatory masses (PIM) has not been assessed.

Previous studies have mainly focused on the differential diagnosis of benign and malignant pancreatic masses. This analysis suggested that EUS elastography could achieve a very high sensitivity and a moderate specificity for differentiating PDAC from PIM. Such findings were not presented clearly in previous studies.

This is a well-performed meta-analysis of currently available studies on the accuracy of EUS elastography in the differential diagnosis between PDAC and PIM. The authors found that EUS elastography is a promising noninvasive method for differential diagnosis of PDAC and PIM and may prove to be a valuable supplemental method to EUS-guided fine-needle aspiration. This is a good meta-analysis and the authors have included many relevant issues missed by other research groups.