Barrett’s esophagus (BE) is a condition of the esophageal mucosa where the esophageal squamous epithelium is replaced with columnar epithelium because of prolonged reflux of gastric acid and bile acid into the esophagus. However, the definition of the esophageal gastric junction (EGJ) is different between Japan and other countries and remains controversial. In Japan, EGJ is defined as the distal limit of the lower esophageal palisade vessels, but as the proximal margin of the gastric folds (Prague criteria). The japanese criteria may be more suitable for the definition of EGJ and for the diagnosis of endoscopic BE than other criteria[1]. Moreover, pathologically, the need to identify goblet cells in esophageal biopsies of BE is also controversial. Morphological evaluation of EGJ biopsies cannot distinguish whether the columnar epithelium comes from the distal esophagus or the proximal stomach[2,3]. There is also some controversy with regard to the definition, classification and histological findings and grading of dysplasia on BE[4]. The consensus indication for the treatment of BE are histological findings of high-grade dysplasia (HGD) by biopsies. After diagnosis of intestinal metaplasia of specific columnar epithelium and HGD, radio frequency ablation (RFA) or cryotherapy is performed because of the increased risk of Barrett’s adenocarcinoma (BAC) associated with HGD[5]; however, the recurrence rate of BE is 5% within a year[6-9]. This indicates that even patients who underwent RFA require closer endoscopic surveillance. As a complete radically curable treatment, we performed entire circumference resection by endoscopic submucosal dissection (ESD) and subsequent steroid treatment. The application and permeation with balloon dilatation were performed to prevent stenosis[10]. We report two cases of en bloc resection of BE and BAC with ESD, in which the patients showed a complete recovery of normal squamous epithelium without recurrence.

A 40-year-old man, whose mother died of BAC associated with BE, underwent screening with esophagogastroduodenoscopy and was diagnosed with circumferential short segment BE (SSBE), which was the same condition that caused his mother’s death (Figure 1A and C). We could not detect severe dysplasia by biopsies before ESD. However, the patient insisted upon radical resection of SSBE. Moreover, narrow band imaging magnified endoscopy revealed irregular microvascular and microsurface patterns, which prompted us to recommend ESD. The patient underwent en bloc resection with ESD because he chose to undergo excision of SSBE with ESD to prevent BAC. For the resection line, the distal side was the border of the palisade vessel and the adoral fold, and the proximal side was 10 mm proximal to the columnar epithelium. Circumferential resection was performed with ESD. On days 5, 8, 12, 15 and 20 after ESD, steroid application and permeation with balloon dilatation were performed to prevent stenosis. We used triamcinolone acetonide (TA) gel as the steroid application. The TA gel was made and applied as follows: total of 10 mL TA (100 mg) was mixed with 7.5 mL Endolubri jelly (Olympus Medical Systems, Tokyo, Japan) to make 17.5 mL of gel. Beginning at the distal side of the artificial ulcer, steroid gel was applied to the ulcer floor while pulling the scope out spirally to the proximal side of the ulcer, using a spraying tube to apply the steroid gel precisely. Subsequently, 5 min of balloon dilatation (12-15 mm in diameter) was performed immediately to allow the steroid gel to permeate into the artificial ulcer. Three months after ESD and steroid treatment, squamous epithelium without stenosis was recovered at the excision site. The site returned to normal stratified squamous epithelium, which was confirmed by a biopsy of the regenerating squamous epithelium after resection (Figure 1B and D). This patient received only a proton pump inhibitor and has not relapsed for 4 years. 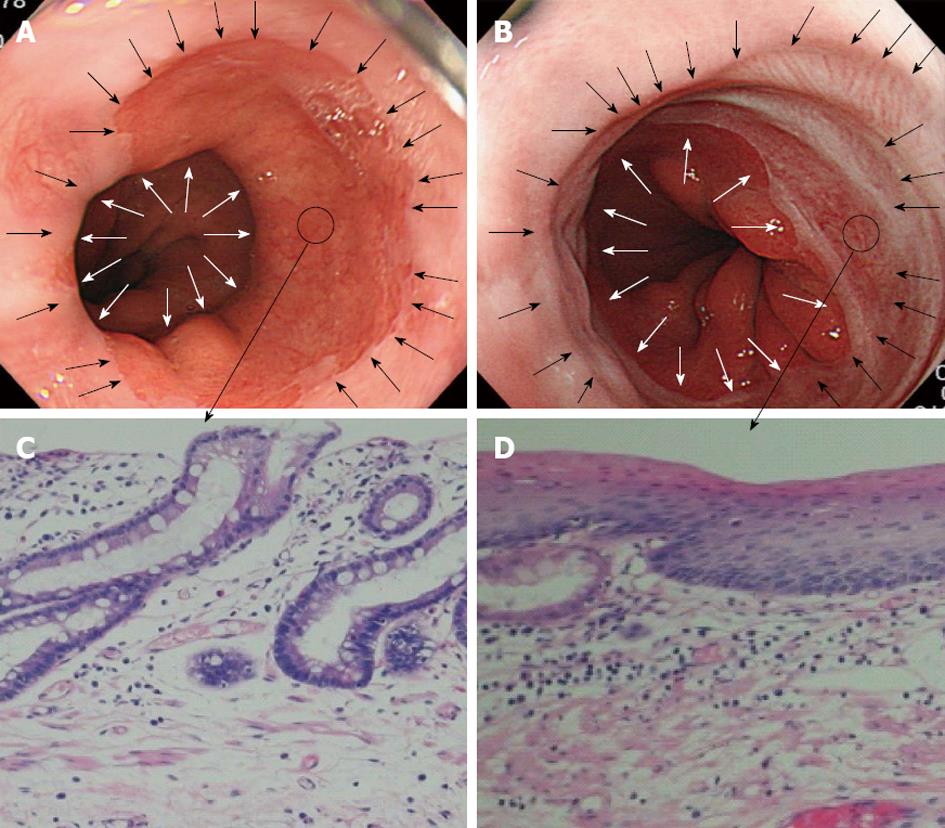 A 65-year-old woman presented with a 20-year history of dysphagia associated with reflux esophagitis. BAC with HGD and severe stenosis of the lower esophagus was diagnosed (Figure 2A). The patient underwent ESD resection of BE and BAC and circumferential resection of the site of the stenosis. After ESD, steroid application and balloon dilatation were performed to prevent stenosis (Figure 2B). BAC was excised and BE was replaced with squamous epithelium (Figure 2C). The normal stratified squamous epithelium was observed at the excision site 6 mo after ESD, which was confirmed by a biopsy (Figure 2D). Narrow band imaging magnified endoscopy also showed a normal intraepithelial papillary capillary loop (IPCL type I). The patient has had no recurrence for 5 years. In addition, high-grade stenosis of the lower esophagus almost disappeared. 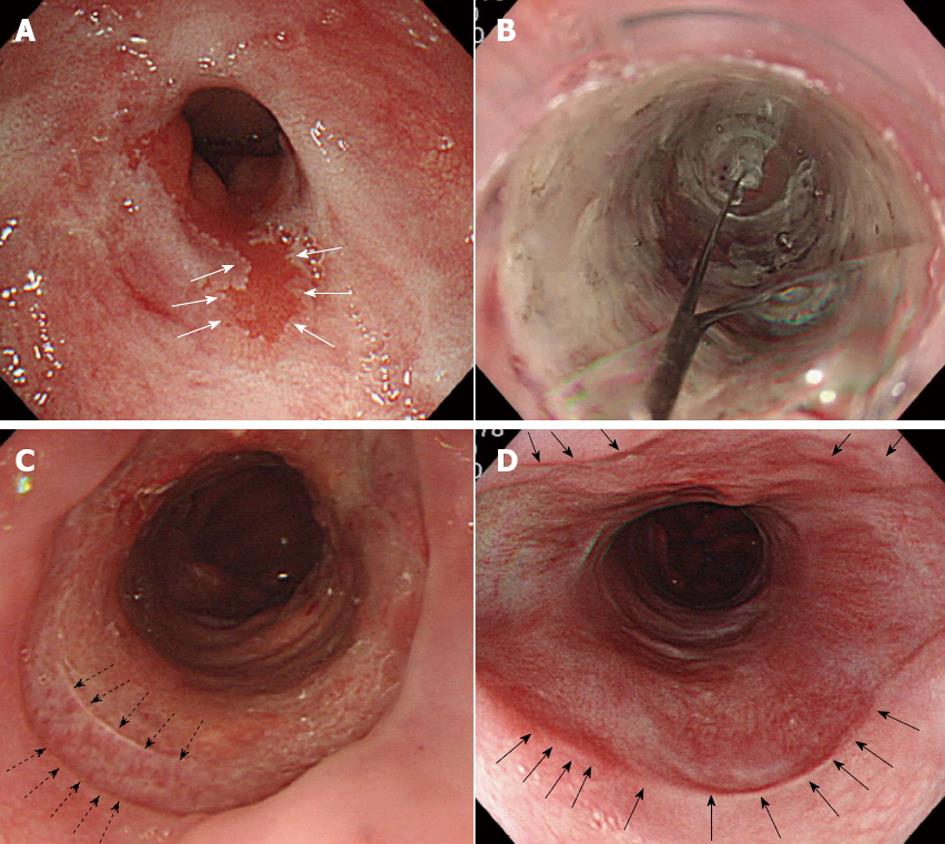 Figure 2 Barrett’s adenocarcinoma with high-grade dysplasia and severe stenosis. A: Barrett’s adenocarcinoma (white arrows) with high-grade dysplasia and severe stenosis of the lower esophagus; B: On days 5, 8, 12, 15 and 20 after endoscopic submucosal dissection, steroid application and balloon dilatation were performed to prevent stenosis; C: The base of the artificial ulcer on day 12 after surgery. Regenerating squamous epithelium can be seen from the resection margins of the proximal side indicated by the dotted arrows; D: On day 60, the base of the artificial ulcer is thoroughly covered with regenerating squamous epithelium (black arrows). No recurrence has been observed for 5 years.
DISCUSSION

The cancerization rate and therapy of BE are still controversial[6,7]. Some researchers have reported lower incidences of dysplasia and BAC among patients with non-dysplasic BE, and most patients were cancer free after a long-term follow-up. Therefore, endoscopic surveillance intervals should be lengthened[8]. Others reported that the incidence of BAC in patients with BE was 30 times more frequent than in the general population[9]. Although closed endoscopic random biopsy is recommended for BE including HGD to detect BAC at an early stage, cancer detection is impossible unless BAC is at the site of biopsy[10,11]. RFA is an established treatment for BE with dysplasia. Although the short-term results of RFA have been determined, there have been concerns about recurrence of BE after RFA. It is reported that for BE treated by RFA, 56% were in complete remission after 24 mo. However, 33% of these patients had disease recurrence within the next 2 years[12,13], which is a very high recurrence rate. Therefore, we hypothesized that radical excision by ESD without recurrence and stenosis is best and most complete radically curative treatment procedure for BE with dysplasia, intestinal metaplasia and BAC. In Japan, ESD is recommend for Barrett’s esophageal cancer after accurate diagnosis using narrow band imaging with magnifying endoscopy because of its high curative rate. However, the esophagus is a narrow organ and healing of an artificial ulcer that occupies two thirds or more of the circumference of the esophagus may result in the formation of a significant stricture. Recently, several studies have demonstrated the effectiveness of local injection or oral administration of steroids for preventing strictures[14,15]. We developed and reported a new method for preventing post-ESD stricture by steroid application and permeation with balloon dilatation[7]. The proximal side of the lower esophageal sphincter has a lumen with a relatively high expansion ability, and is resectable circumferentially without stenosis by steroid application and permeation with balloon dilatation, even if BE with HGD is subjected to circumferential resection with ESD. In the ESD procedure, recurrence does not occur because the procedure involves en bloc resection and the regenerating epithelium returns to normal squamous epithelium. Thus, ESD seems to be effective in the treatment of BE associated with HGD.

We thank Dr. Makoto Oryu for technical and editorial assistance.