A 72 year-old female developed a herpetic esophagitis after 3 d of oral corticotherapy for an acute exacerbation of chronic obstructive pulmonary disease, presenting as odynophagia and total dysphagia. Biospies were taken during a first esophagogastroduodenoscopy (EGD) and the patient was referred to the thoracic surgery service with a presumptive diagnosis of esophageal cancer. A second EGD was planned for dilatation, but by that time the stenosis was completely resolved. The biopsies taken during the first EGD revealed multiple herpetic viral inclusions and ulcerations without any dysplasia or neoplasia. In front of a severe esophageal stenosis, one must still exclude the usual differential diagnosis peptic stenosis and cancer. Visualization of endoscopic lesions can suggest the diagnosis but must be promptly confirmed by biopsy, viral culture or polymerase chain reaction. Although immune systemic effects of corticotherapy are well known and herpetic esophagitis occurs most frequently in immunocompromised individuals, this case emphasizes the importance of clinical awareness concerning short courses of corticotherapy for immunocompetent individuals. This article discusses the reactivation process of herpetic infection in this context and addresses its diagnostic and therapeutic issues.

Core tip: This article reports the case of a 72 year-old female who developed a herpetic esophagitis after 3 d of oral corticotherapy for an acute exacerbation of chronic obstructive pulmonary disease, presenting as odynophagia and total dysphagia. Although immune systemic effects of corticotherapy are well known and herpetic esophagitis occurs most frequently in immunocompromised individuals, this case emphasizes the importance of clinical awareness concerning short courses of corticotherapy for immunocompetent individuals.

The most frequent causes of infectious esophagitis are candida, cytomegalovirus and herpes simplex virus type 1 (HSV-1). Although typically these esophagitis occurs in the immunocompromised patients, it has been seen also in immunocompetent patients. We report a case of a 72 year-old female who developed a herpetic esophagitis presenting as odynophagia and total dysphagia after three days of oral corticotherapy for an acute exacerbation of chronic obstructive pulmonary disease (COPD).

A 72 year-old female was referred to the thoracic surgery department following the finding of a impassable stenosis of lower esophagus during an esophagogastroduodenoscopy (EGD). Her pertinent past medical history included repair of a hiatal hernia via right thoracotomy several years ago, gastroesophageal reflux and coronary artery disease (CAD) with a spastic component (Takutsubo). The patient also reported a history of caustic injury without subsequent dysphagia in her childhood. She does not recall having had oral or genital herpes, nor cutaneous lesions that would suggest a prior herpetic infection. Three months prior to this event, the patient had received a course of oral prednisone 15 mg daily for ten days, without any complication for her COPD.

The patient had been discharged nine days prior to this event for an acute exacerbation of COPD. During that hospitalization, she was discharged with a prescription of oral prednisone 30 mg daily with standard tapering doses. She decided to interrupt on her own the medication on the third day of this regimen since she presented sudden retrosternal pain, odynophagia and dysphagia to solids and liquids. She reported a slight tenderness at palpation in the epigastric region, but otherwise her complete physical examination was normal.

An EGD was performed by the gastroenterologist on day 4 of her present hospitalization and an impassable esophageal stenosis was discovered in the mid esophagus at 25 cm EGD (Figure 1). Biospies were taken and the patient was referred to the thoracic surgery service with a presumptive diagnosis of a mid esophageal cancer. We planned to repeat the EGD and proceed to a dilatation. But on day 8, the EGD was repeated by another gastroenterologist and by that time the patient reported a slight improvement of her dysphagic symptoms. Hyperhemia concordant with oesophagitis of the mid oesophagus was found, without any stenosis (Figure 2). At this moment, the patient still had some retrosternal pain but she reported improvement in swallowing liquids. 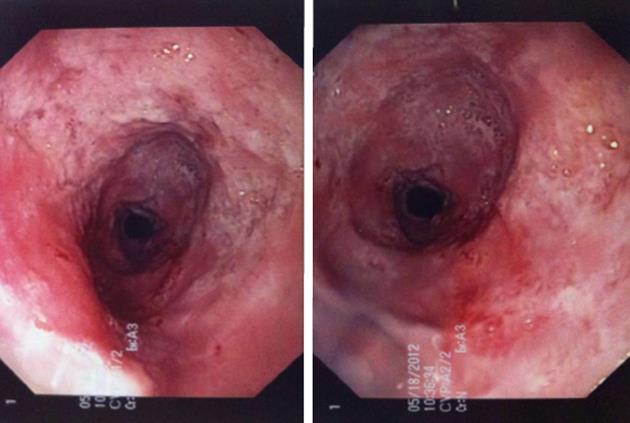 Figure 1 Stenosis of the esophagus, day 4. 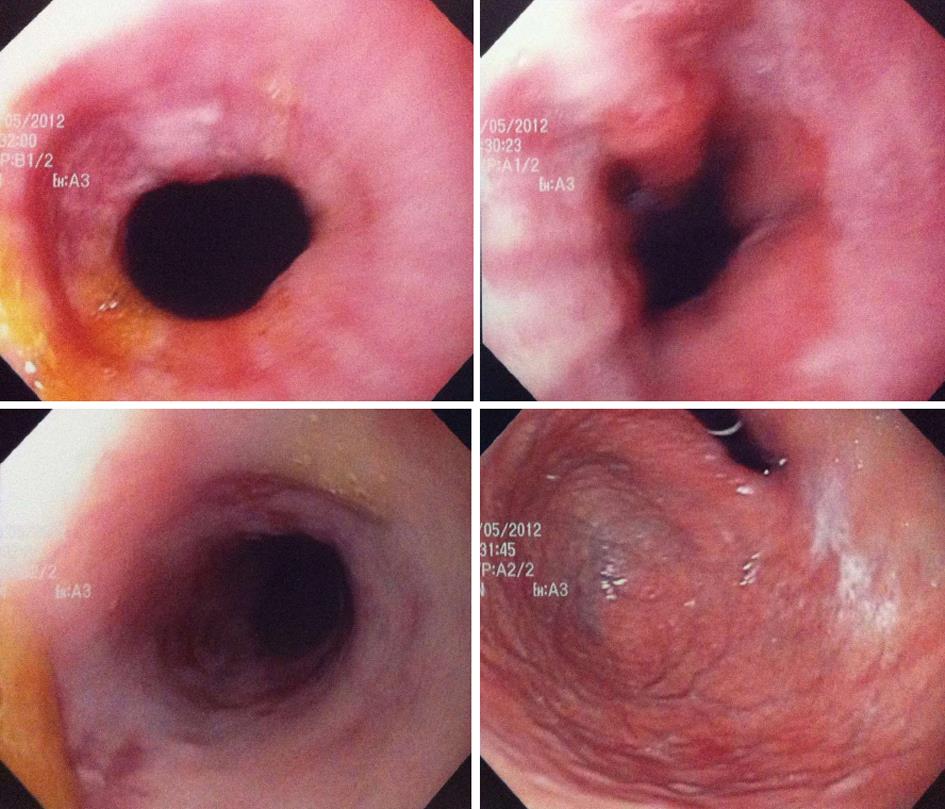 Figure 2 Hyperhemia consistent with esophagitis with complete resolution of the stenosis of the esophagus, day 8.

The biopsies taken during the first EGD revealed multiple herpetic viral inclusions and ulcerations without any dysplasia or neoplasia (Figure 3). A viral isolation on Vero cells and diploid human fibroblast cells demonstrated the presence of HSV-1. Acyclovir (5 mg/kg iv each 8 h for a total of 10 d) was started along with xylocaine 2% (15 mL po qid prn) for symptomatic relief. The patient rapidly improved and was discharged on day 6 with valacyclovir 1 g po bid for a total of 16 d. 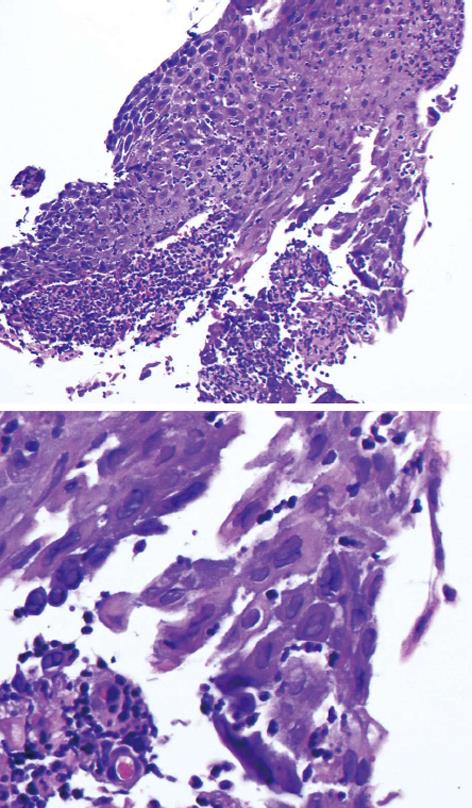 Herpetic esophagitis occurs mostly in immunocompromised hosts such as organ transplant recipient (solid organ and bone marrow) or patients with human immunodeficiency virus (HIV) infection[1]. The main complaints in immunocompetent patients are fever and retrosternal chest pain[2]. In this case, there is occurrence of a complication not frequently described in the litterature: reversible esophageal stricture associated with herpes simplex esophagitis in immunocompetent host following short-term systemic corticotherapy.

Reflux disease and long-standing inflammation are well known causes of benign esophageal stricture. Malignancy must always be ruled out by endoscopy and biopsy. In the setting of herpetic oesophagitis, stenosis secondary to edema have been described in immunocompromised host with HIV[3]. Early endoscopic findings include vesicles, ulcerations and cobblestoning secondary to cluster lesions. The mucosa is friable and exudates are frequently present. Mucosal necrosis can also be seen in late stages[4].

Diagnosis is made by histopathology and virus isolation. The pathognomonic alterations include multinucleated cells with ground-glass, nuclear inclusions with chromatin margination. The cellular inclusions are surrounded by an inflammatory cell infiltrate. Pathologists use peroxidase-conjugated antibodies against HSV-1 and HSV-2. Virus isolation in tissue culture and nucleic acid amplification techniques are sensitive but may give false positive results from colonize oral mucosal surface.

Triggers known of HSV-1 recurrent labial infection are multiple, from immunosuppression to fatigue and stress[5]. In our case, the patient had an acute exacerbation of COPD and a subsequent short-term corticotherapy at low doses. Both of these events could have triggered HSV-1 reactivation, which will be discussed separately.

First, infections represent a major stress, especially in COPD disease. Viral infections have been identified as a causative factor of COPD exacerbation[6]. Although the role of bacterias during acute exacerbations is still under investigations, studies describe immunomodulatory effect of antibiotics as a mecanism leading to reduction of exacerbation rate and severity, addressing the bacterial chronic infection in COPD[7]. It is also important to mention abnormal Th1 responses among the various disruptions of immune system occuring in COPD[8]. Th-1, the main immune response to HSV infection, is then impaired. These evidences could partly explain HSV-1 reactivation in our case.

Second, a common side effect of corticotherapy is secondary infections. Topical corticosteroids have been a proven factor of bovine herpes virus reactivation in intranasal rabbit model[9]. No clinical evidence shows that systemic corticoids reactivate HSV, although topical application on active HSV infection can lead to expansion of lesions. However, glucocorticoids induced a polarization of Th2 over Th1 profile[10]. Th1, the main immune response to HSV infection, is then inhibited. It has not been proven however that reactivation of prior infection can be triggered by these mechanisms. Of interest, it is known that sudden cessation of glucorticoids can be a risk factor of HSV reactivation[11]. Two other case reports of HSV reactivation associated with corticotherapy have been published. One fatal HSV infection under corticotherapy in a patient with Darrier disease[12]. A case of fatal HSV hepatitis following eight days of prednisone 40 mg DIE given for ulcerative colitis has also been reported, in an otherwise immunocompetent patient[13]. In both cases, authors concluded that high clinical suspicion and prompt diagnosis are crucial.

Furthermore, it is interesting to remember that our patient also had a previous COPD exacerbation treated by corticotherapy three months before. HSV-1 esophagitis could have been triggered by the additional burden of the last exacerbation and corticotherapy.

Herpetic esophagitis is usually self-limited in immunocompetent patients, but Acyclovir therapy has been used successfully in many cases. Most authors suggest hasten symptomatic relief and subsequent shortening of clinical course with medical treatment[1,2,4,13-15]. For immunocompetent patients, suggested dosage is 5 mg/kg iv every 8 h for 7-14 d that can be then completed orally as the patient swallowing returns. Oral viscous lidocaine solution (15 mL of 2% solution) can also be administered to lessen the odynophagia.

To conclude, clinicians must be aware that reactivation of herpetic infection can occur following a course of low dose corticotherapy and can cause herpetic esophagitis also in immunocompetent patient. In front of a severe esophageal stenosis, one must still exclude the usual differential diagnosis peptic stenosis and cancer. Visualization of endoscopic lesions can suggest the diagnosis but must be promptly confirmed by biopsy, viral culture or polymerase chain reaction. Acyclovir is considered to be the treatment of choice, with oral xylocaine for pain relief.