Core tip: We report an extremely rare case of mucocele of the appendix due to endometriosis. Although it is uncommon, preoperative diagnosis of the mucocele is important; however, diagnosis is difficult using imaging modalities. We report a more accurate diagnostic possibility using preoperative imaging modalities, such as colonoscopy, ultrasonography, computed tomography, and magnetic resonance imaging. Furthermore, this report is important because it is the first review of the literature for mucocele of the appendix due to endometriosis.

A 43-year-old woman was admitted to the hospital because of recurrent right lower abdominal pain during her menstrual periods. On physical examination, she presented with mild right lower abdominal tenderness without rigidity. Her blood and urine tests were normal. Abdominal computed tomography (CT) revealed low-density lesions near the appendix. Colonoscopy revealed submucosal tumor-like elevations of the appendiceal orifice. A biopsy was performed and result was negative. Subsequent magnetic resonance imaging (MRI) revealed hyperintensity on T2-weighted imaging (WI) (Figure 1). Consequently, mucocele of the appendix was diagnosed preoperatively. Her recurrent right lower abdominal pain during menstrual periods suggested the involvement of endometriosis. Our patient was offered open surgical resection because malignancy could not be ruled out. During surgery, several cystic lesions were observed around the appendix. Features of endometriosis were not observed in the pelvis, the uterus, or the rest of the abdominal cavity. An open ileocecal resection was performed. Multiple cystic lesions were observed around the appendix. The contents of the cystic lesions consisted of mucus (Figure 2). Histopathological examination indicated that the cysts were a simple type of mucocele and that endometriosis and smooth muscle hypertrophy were present in the muscle layer of the appendix around the mucocele (Figure 3). Consequently, we reached a diagnosis that the mucocele of the appendix was due to endometriosis. The postoperative course was uneventful. 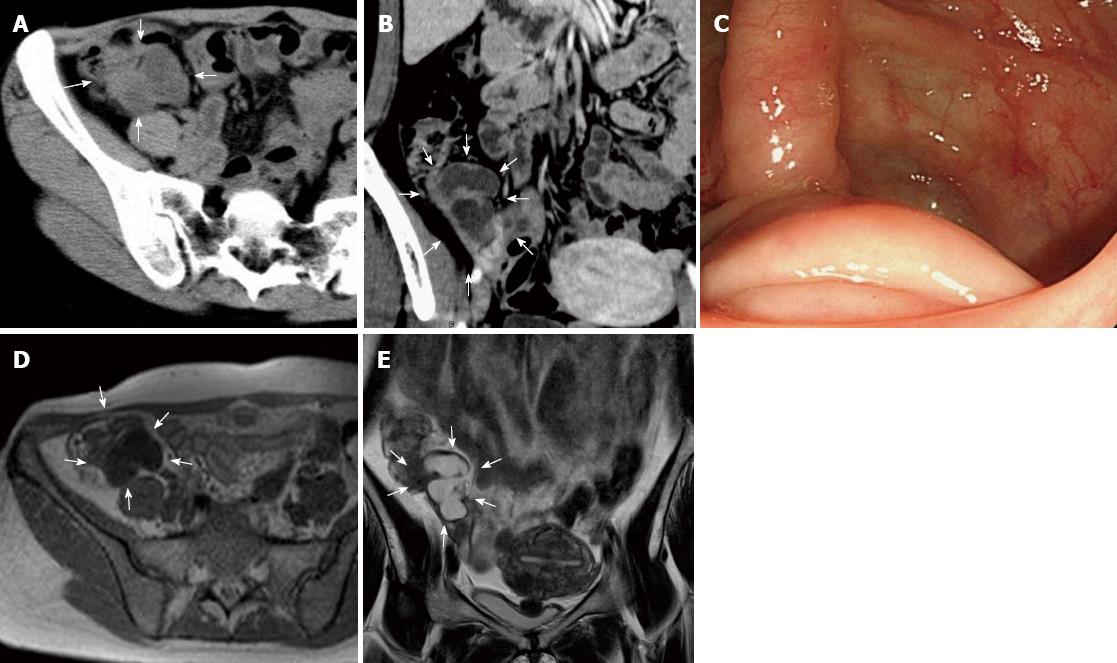 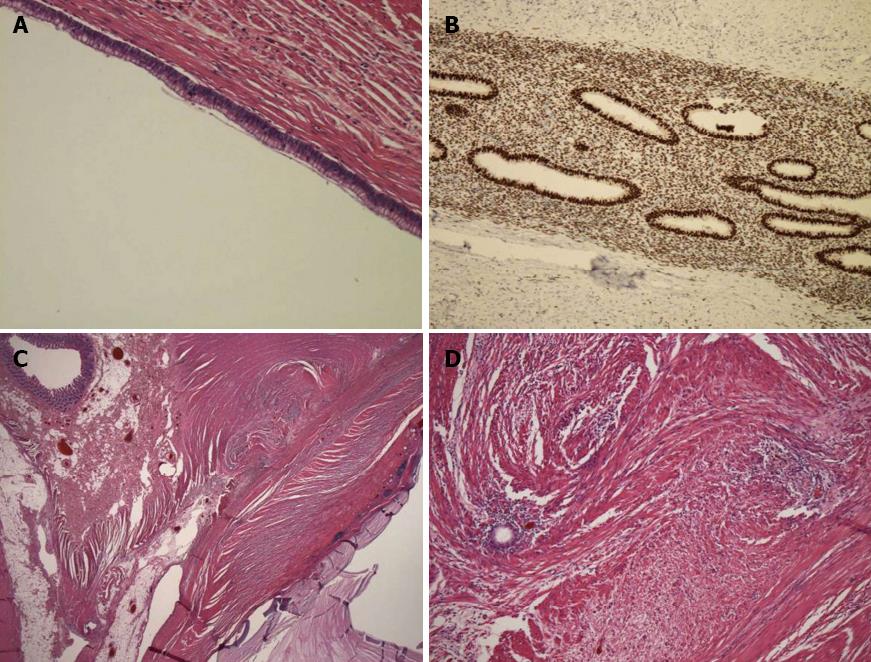 According to the modern classification[2,3], mucocele of the appendix includes four histological groups: simple mucocele, mucosal hyperplasia, mucinous cystadenoma, and mucinous cystadenocarcinoma. A simple mucocele is characterized by degenerative epithelial changes due to obstruction and distention of the appendix. This type represents 20%-30% of cases. A simple mucocele is caused by mucus distention secondary to an obstruction of the appendix due to fecaliths, post-inflammatory scarring, or rarely, endometriosis. Mucosal hyperplasia is similar to a hyperplastic colon polyp histologically. This type represents 20%-30% of cases. Mucinous cystadenoma is a neoplasm that presents with a tubular or papillary pattern, with mucus production and adenomatous epithelium. This type represents 30%-50% of cases. Mucinous cystadenocarcinoma differs from cystadenoma because glandular and stromal invasion is involved. Previously, it was believed that only mucinous cystadenocarcinoma could cause pseudomyxoma peritonei (PMP), but it has recently been reported that other types of mucocele can cause PMP. Ruiz-Tovar et al[3] presented a case of simple mucocele that was apparently not perforated and developed PMP.

Consequently, the preoperative diagnosis of mucocele of the appendix is crucial. Colonoscopy, ultrasonography (USG), CT and MRI are used for diagnosis. On colonoscopy, the appearance of the appendiceal orifice at the center of the mound has been called the “volcano sign”. USG can be used to differentiate between acute appendicitis and mucocele. Dilatation of the appendiceal lumen to ≥ 15 mm suggests mucocele with 83% sensitivity and 92% specificity. CT offers better specificity in establishing a diagnosis of mucocele. The typical features are cystic masses that are well circumscribed with low attenuation. Wall calcifications are observed in 50% of cases, and they strongly suggest mucocele. In addition, enhancing nodules in the mucocele wall suggest cystadenocarcinoma. MRI is also useful in establishing a diagnosis of mucocele. On MRI, mucocele appears as a cystic mass with low to intermediate signal intensity on T1-WI and high signal intensity on T2-WI. These findings can be attributed to the high protein content of a mucocele[16]. In our case, the CT, MRI and colonoscopy imaging results were compatible with these findings.

When mucocele of the appendix is diagnosed preoperatively, open surgery is favored over laparoscopy to prevent rupture of the mucocele, which may induce PMP. If mucocele is detected during a laparoscopic procedure, the patient must undergo conversion to open surgery.

Hapke et al[5] noted that the progression of mucocele of the appendix due to endometriosis consists of the following steps. Endometriosis results in smooth muscle hypertrophy of the appendix, including the muscularis mucosa, with obstruction of some of the gland crypts. These obstructions lead to local increased mucin production from multiple small cysts. Ultimately, several of these small cysts coalesce, resulting in a single layer cyst that can be dissected through the submucosa proximally. In our case, multiple small cysts were observed surrounding the appendix. These findings confirm the proposal of Hapke et al[5].

There are only 10 previously reported cases of a similar condition in the English literature[4-12]. We reviewed these reported cases and the present case. The mean age at presentation was 34 years (22-56 years). The patients presented various symptoms: four had recurrent abdominal pain during menstrual periods; three had chronic pelvic pain; two had acute abdominal pain with vomiting; one had increasing menorrhagia (she had complicated uterine myomas); and another had no symptoms. Preoperative diagnosis of mucocele was made in five cases; diagnostic laparoscopy was performed in five cases; and in one case, it was found by chance during surgery. Open surgery was performed in six cases, and two experienced rupture during surgery. The mean tumor size was 2.5 cm (1.3-5.5 cm). Nine cases had a single cyst, and two had multiple cysts. One case was complicated with intussusception and another with ureteric obstruction.

In summary, we report a rare case of mucocele of the appendix due to endometriosis and provide the first review of the literature.