Core tip: This paper reported three cases of laparoscopic cholecystectomy successfully performed in patients with anesthetic problems that included cardiopulmonary disease, severe kyphosis, and ankylosing spondylitis. This study demonstrates that regional anesthesia can be considered as a valid option for patients with gallbladder disease who are poor candidates for general anesthesia due to cardiopulmonary problems.

A 71-year-old, American Society of Anesthesiology (ASA) physical status III male patient (168 cm, 56 kg) underwent laparoscopic cholecystectomy due to acute cholecystitis with cholelithiasis. The patient had undergone a right pneumonectomy nine years previous to this procedure (Figure 1). A standard pulmonary function test revealed a moderate obstructive and restrictive pattern. Hypokinesia of the apical anterior and septum segments was observed on echocardiography. Pulmonology consultation reported a moderate postoperative risk that could be fatal if postoperative pneumonia developed. Cardiology consultation reported a postoperative risk of 1%-5% based on modified Goldman cardiac risk criteria[1]. Because severe postoperative complications were anticipated, segmental spinal anesthesia was performed and CO2 inflation to an intra-abdominal pressure of 8 mmHg. Laparoscopic cholecystectomy was performed; the procedure was smooth and uneventful. The patient was discharged 3 d after surgery. 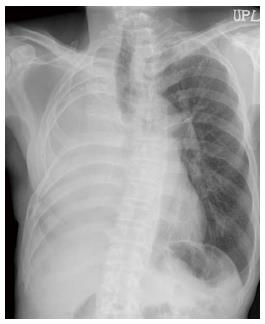 Figure 1 Chest posterior to anterior of case 1. The patient had undergone a right pneumonectomy.
Case 2

A 42-year-old male patient (173.6 cm, 68.9 kg) suffering from ankylosing spondylitis was admitted to our hospital presenting with right upper quadrant pain. Abdominal ultrasound revealed a 2 cm sized cholelithiasis for which he was scheduled to undergo laparoscopic cholecystectomy. The patient was ASA III and Mallampati grade IV on airway examination. The patient had fixed rigidity of the cervical spine and could not lie supine (Figure 2A) and his mouth opening was restricted. Accordingly, he was placed in a supine position with three pillows under his head. The anesthesiology team decided to perform fiberoptic intubation through the nasotracheal tree while the subject was conscious (Figure 2B). The patient was informed of an anticipated difficult orotracheal intubation. Laparoscopic cholecystectomy was performed without any complication. There were no perioperative complications related to airway management, and the patient was discharged 3 d after surgery. 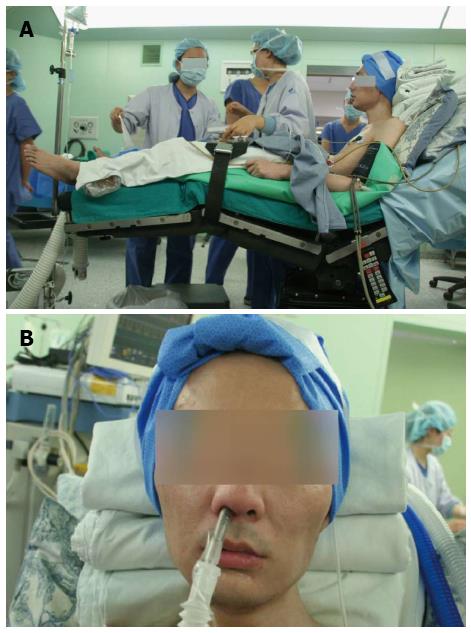 Figure 2 A 42-year-old male patient suffering from ankylosing spondylitis was admitted to our hospital presenting with right upper quadrant pain. A: Operating position used for case 2; B: Awake fiberoptic intubation through the nasotracheal tree used for case 2.
Case 3

A 54-year-old female patient (140 cm, 45.6 kg) with ASA physical status III suffering from severe thoracolumbar kyphosis (Figure 3) presented with right upper quadrant pain. The patient was diagnosed with acute cholecystitis on abdominal ultrasound and was scheduled to undergo laparoscopic cholecystectomy. Moderate restrictive pattern was found following a pulmonary function test. The patient could not lie supine and needed thick pillows beneath her head for support. Her thoracic cage was tilted anteriorly resulting in a low-lying costal margin and narrow abdomen. It was difficult to insert trocars because of narrow abdomen (Figure 4). CO2 was used to inflate her intra-abdominal pressure to 8 mmHg. The patient underwent laparoscopic cholecystectomy successfully and discharged from hospital at 5 d after surgery. 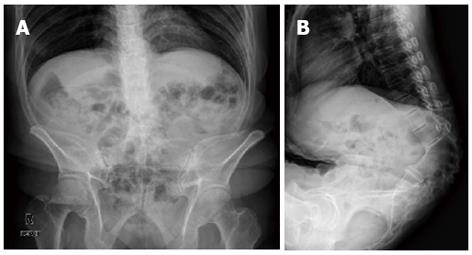 Figure 3 Thoracolumbar spine image for case 3. The anteroposterior (A) and lateral (B) views are shown. 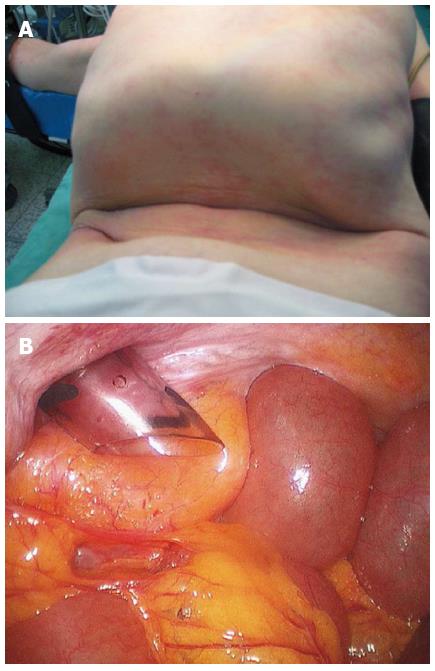 Considerable difficulties in anesthetic management are encountered during laparoscopic surgery. Hemodynamic instability in patients with cardiopulmonary dysfunction may develop due to pneumoperitoneum and position changes during the operation. While laparoscopic cholecystectomy is usually performed under general anesthesia, regional anesthesia has been used in special high-risk cases[2]. However, laparoscopic cholecystectomy under general anesthesia has been reported as safe and feasible even in high-risk patients[3]. Here, we show that carbon dioxide pneumoperitoneum with an intra-abdominal pressure of 8-12 mmHg for high-risk patients can be safe if the patients are well monitored and hemodynamic instability is actively treated. However, the patient in case 1 was at risk of post-operative death if pneumonia developed in the remnant lung, and was scheduled for the regional anesthesia. Due to the harmful effects of high intra-abdominal pressure, it is recommended that the lowest pressure possible that allows adequate exposure of the operative field be used[4]. A laparoscopic cholecystectomy was successfully carried out by maintaining CO2 pressure < 8 mmHg during the operation with the active participation of the attending anesthesiologists.

Ankylosing spondylitis is a chronic and progressive inflammatory disease involving articulations of the spine and adjacent tissue. Oral intubation is difficult in ankylosing spondylitis patients with cervical spine rigidity. Recently, awake fiberoptic intubation has been increasingly used, and considered to be the safest option for patients with anticipated airway difficulties[5,6]. To secure the airway, we used awake fiberoptic intubation in case 2 with written informed consent of the patient. In addition to airway management, anesthesiologists need to be concerned with restrictive ventilator defects and airway problems associated with ankylosing spondylitis. Therefore, preoperative examination for cardiovascular and pulmonary function is required[7].

Kyphosis is a deformity of the spine. Anesthesia for kyphosis in common with ankylosing spondylitis is often challenging. There is usually secondary involvement of the respiratory, cardiovascular, and neurologic systems. A detailed pre-anesthetic assessment and optimization of the respiratory and cardiovascular systems should be done[8]. It is desirable to maintain the lowest intra-abdominal pressure to prevent the adverse hemodynamic effect of pneumoperitoneum in restrictive lung disease. Another concern for the laparoscopic surgeon for a patient with kyphosis is positioning of the patient and surgical approach to the abdomen. Increasing numbers of older patients are presenting with benign gallbladder disease with senile kyphosis caused by aging or osteoporosis. Laparoscopic surgery is minimally invasive, and in severely kyphotic patients the procedure may prove difficult in approaching the narrow abdomen. In the third case, we performed this difficult surgery because the chest of the patient was tilted anteriorly and the abdominal cavity was narrowed by low-lying costal margin. Abnormalities of the spine can alter the contour of the pelvic vessels. Kyphosis, scoliosis, and the other skeletal abnormalities can affect vascular anatomy and must be considered during trocar insertion[9]. Severe senile kyphosis is not a contraindication for laparoscopic surgery[10].

Patients with spinal deformity such as ankylosing spondylitis and kyphosis form a challenging group to anesthesiologists and laparoscopic surgeons because of difficulties in intubation, positioning, and abdominal approaches. Careful preoperative anesthetic assessment for respiratory dysfunction, cardiac impairment, difficult airway, and associated specific problems in patients with ankylosing spondylitis or kyphosis is imperative. In patients with severely compromised respiratory function the final surgical plan should be a joint decision between surgeon and anesthesiologist. The patient and family should be warned about the possibility of postoperative ventilation and prolonged respiratory weaning and support.

In conclusion, we successfully performed three cases of laparoscopic cholecystectomy in patients with anesthetic problems including cardiopulmonary disease, severe kyphosis, and ankylosing spondylitis.