We report a case of pancreatic hemolymphangioma. Hemolymphangioma is a malformation of both lymphatic vessels and blood vessels. The incidence of this disease in the pancreas is extremely rare. To the best of our knowledge, only seven cases have been reported worldwide (PubMed). A 39-year-old woman with a one-day history of abdominal pain was admitted to our hospital. There was no obvious precipitating factor. The preoperative examination, including ultrasonography and computed tomography, showed a cystic-solid tumor in the pancreas, and it was considered to be a mucinous cystadenoma or cystadenocarcinoma. Pancreatic body-tail resection combined with splenectomy was performed. After the operation, the tumor was pathologically demonstrated to be a pancreatic hemolymphangioma. Although pancreatic hemolymphangioma is rare, we believe that it should be considered in the differential diagnosis of cystic-solid tumors of the pancreas, particularly when there is no sufficient evidence for diagnosing cystadenoma, cystadenocarcinoma or some other relatively common disease of the pancreas.

Core tip: This article reports an extremely rare case of pancreatic hemolymphangioma, which is a cystic-solid tumor. The imaging findings are different from those reported in the literature. Although it is rare and the definitive diagnosis depends on histological evidence, it should be considered preoperatively in the differential diagnosis of cystic-solid or cystic tumors of the pancreas, particularly when there is no sufficient evidence for diagnosing cystadenoma, cystadenocarcinoma or some other relatively common disease of the pancreas.

Hemolymphangioma is a malformation of both lymphatic vessels and blood vessels. The incidence of pancreatic hemolymphangioma is extremely rare. To the best of our knowledge, only seven cases have been reported worldwide (PubMed)[1-7]. Macroscopically, it is a multilocular cystic mass with endothelium covering the connective septa[2,3]. The tumor typically presents as a mass with heterogeneous enhancement on computed tomography (CT)[1,6,7]. Here, we report a case of pancreatic hemolymphangioma with different imaging findings.

A 39-year-old woman was admitted to our hospital with a complaint of abdominal pain for one day. There was no obvious precipitating factor, no weight loss and no family history of cancer. A physical examination showed mild tenderness in the left hypochondrium. Laboratory tests, including serum tumor markers, were normal.

The ultrasonography and CT findings of the tumor were as follows: (1) Location: the tumor was located at the body and tail of the pancreas; (2) Shape: it was irregular, approximately 10 cm × 7 cm in size, and had a clear border (Figures 1 and 2); (3) Composition: it was a cysticsolid tumor. The cystic area, with a mean CT attenuation value of 30 Hounsfield units (HU), comprised the main part. There was a cord-like septum in the center of the cystic area (Figure 2A, arrow). The solid part was located at the back of the tumor, with a mean CT attenuation value of 68 HU (Figure 2E, arrow); (4) Enhancement: it showed almost no change on contrast-enhanced CT images (Figure 2B-D, Figure 2F-H) compared with pre-contrast images, as assessed with the CT attenuation value; and (5) Neighborhood: the adjacent organs were compressed, and no enlarged lymph nodes were found. Based on these findings, mucinous cystadenoma or cystadenocarcinoma was initially considered. 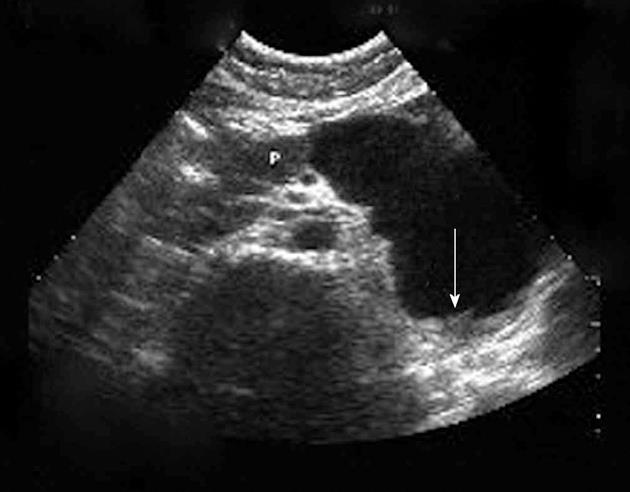 Figure 1 Ultrasonography. The tumor is located at the body and tail of the pancreas and is irregularly shaped. The cystic part has a low-intensity echo level, and the solid part (arrow) displays an isointense echo. 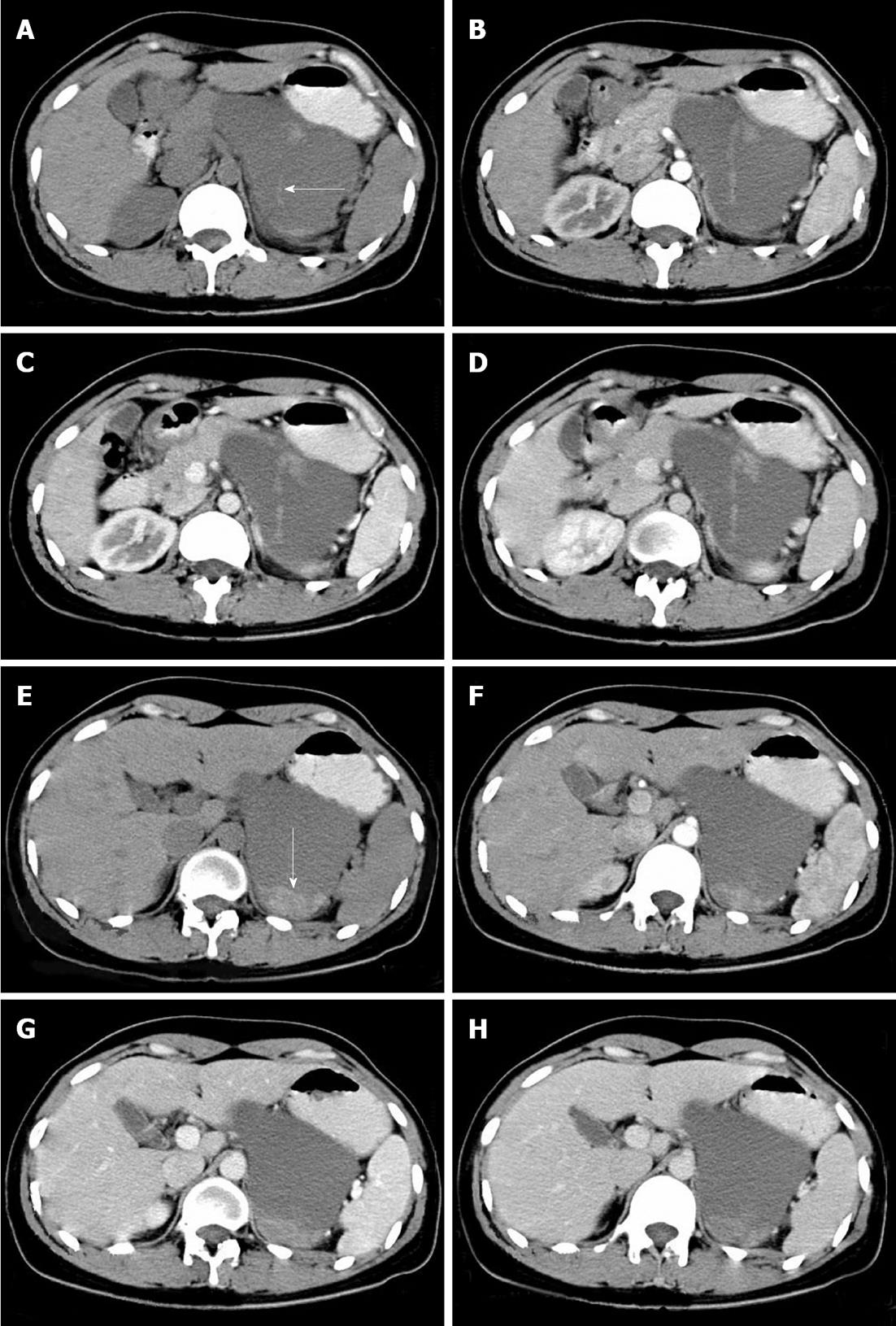 The patient underwent an exploratory laparotomy. During the operation, the mass was identified as a large dark red mass located at the body and tail of the pancreas, slightly adhering to the gastric wall, posterior peritoneum and left kidney, with bloody fluid inside. Pancreatic body-tail resection combined with splenectomy was performed. Microscopically, some dysplastic lymphatic vessels and blood vessels were observed in the tumor (Figure 3). The pathological diagnosis was hemolymphangioma. Her postoperative course was uneventful. She is currently enjoying a normal life without signs of recurrence.

Figure 3 Pathological sections. Some dysplastic lymphatic vessels (A) and blood vessels (B) can be observed in the tumor. Hematoxylin and eosin stain, × 100.
DISCUSSION

Hemolymphangioma is a congenital malformation of the vascular system. The formation of this tumor may be explained by obstruction of the venolymphatic communication between dysembryoplastic vascular tissue and the systemic circulation[1-3]. Only seven cases have been reported previously[1-7]. Most of these cases were women (6 of 7), and most of the tumors were located at the head of the pancreas (6 of 7). A patient with pancreatic hemolymphangioma can be asymptomatic for a long time. Abdominal pain and awareness of an abdominal mass are the most common symptoms[7].

The imaging findings of pancreatic hemolymphangioma typically show a mass with heterogeneous enhancement[1,6,7]. In our case, the tumor showed different imaging findings. It presented as a cystic-solid tumor (a single large cyst and a small solid part), with no enhancement in the three-phase contrast scan. We believe that the cystic part might be due to the rupture and fusion of the vascular cavity and that the solid part represented the residual and compressed vascular tissue. The lack of enhancement in the three-phase contrast scan may be related to the relatively small number of blood vessels in the tumor and slow-moving blood flow in the dysplastic blood vessels.

The differential imaging diagnosis for this case includes other cystic-solid or cystic lesions of the pancreas. A mucinous cystadenoma typically shows a single large cyst with a smooth contour, fine septa, even wall, and potentially, small nodules. A thick wall and large nodules might suggest the diagnosis of cystadenocarcinoma. Both mucinous cystadenomas and cystadenocarcinomas can present septa, walls, and nodule enhancement. A solid pseudopapillary tumor of the pancreas is typically found in young women presenting a cystic-solid mass with enhancement of the solid part. A pancreatic pseudocyst typically shows a unilocular lesion with a history of pancreatitis. However, the definitive diagnosis of this tumor was made using histological evidence[1,3].

An operation is required to treat this tumor. Two operative methods are available: tumor enucleation and partial pancreatectomy[2]. Because the diagnosis is made postoperatively, pancreatoduodenectomy is typically used for the suspicion of malignancy or invasion[1,6].

Although rare, pancreatic hemolymphangioma should be considered in the differential diagnosis when a cystic-solid tumor of the pancreas is found, particularly when there is no sufficient evidence for diagnosing cystadenoma, cystadenocarcinoma or some other relatively common disease.

We thank Min-Ming Zhang, a responsible Professor and the Director of our department, who provided us with support during the work.