Core tip: The occurrence and development of type 2 diabetes mellitus (T2DM) is accompanied by an inflammatory response. Monocyte chemoattractant protein (MCP)-1 is a member of the CC chemokine subfamily, and is a key mediator of inflammation. MCP-1 also belongs to the chemokine superfamily. T2DM subclinical vascular lesions are a type of mild inflammation. Endothelial cell MCP-1 can be increased markedly. Danzhijiangtang capsule is a traditional Chinese medicine compound preparation. The technique can restrain mononuclear cell chemotactic activity by supplementing qi, nourishing yin and invigorating blood circulation, thereby preventing and treating subclinical vascular lesions.

The occurrence and development of type 2 diabetes mellitus (T2DM) is accompanied by an inflammatory response, which then promotes the process of T2DM. Monocyte chemoattractant protein (MCP)-1 is a member of the CC chemokine subfamily, and is a key cytokine mediator of the inflammatory response. MCP-1 also belongs to the chemokine superfamily[1]. As shown in a large number of experimental studies, MCP-1 is a risk factor for the occurrence and development of insulin resistance (IR), T2DM and related vascular complications[2].

A total of 62 outpatients and inpatients with T2DM in the Department of Metabolism and Endocrinology, First Affiliated Hospital of Anhui College of Traditional Chinese Medicine were enrolled in this study from 2009 to 2011. All patients conformed to the diagnostic criteria of diabetes according to World Health Organization (1999), without clinical manifestations of heart, brain or kidney vascular lesions. Color Doppler ultrasound showed that the intima-media thickness of the common carotid, femoral and iliac arteries was > 0.6 cm. The exclusion criteria were as follows: patients with diabetes duration > 1 year; pregnant or lactating women; patients with metabolic disorders (e.g., ketoacidosis) and complicated severe infection in the preceding month; patients complicated with a vascular lesion of the heart, brain, kidney or other region, or other severe primary diseases; patients taking anticoagulant, antiplatelet or antifibrinolytic drugs during the preceding month. 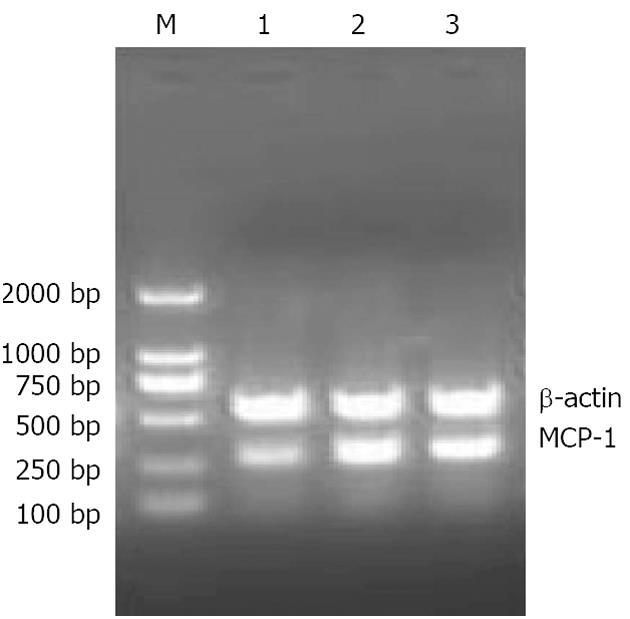 In recent years, TM has been confirmed as a molecular marker of endothelial cell injury[9,10]. In addition, it can be used as a marker for judging the severity of atherosclerosis of peripheral arteries and coronaries, and a sensitive detection index for the occurrence of vascular complications[11]. As found in prospective studies, vWF is involved in blood coagulation, and can promote platelet adhesion[12]. It is an important marker for predicting early subclinical endothelial cell injury in T2DM and development of urinary albumin excretion rate[13]. In addition, it is an important risk factor for new microvascular lesions. P-selectin has been a research hotspot for vascular lesions in recent years. It is an important marker of endothelial cell injury and platelet activation, and is considered to be an important factor in the initial pathological process of atherosclerosis[14].

MCP-1 is one member of the CC chemokine subfamily, and is a key cytokine mediator of the inflammatory response[15]. In T2DM, high-level blood glucose, non-enzymatic glycated protein, angiotensin, oxidative stress, interleukin-1, and tumor necrosis factor-α can all upregulate MCP-1 expression[16-19]. MCP-1 can specifically induce blood monocytes to enter the endothelium of the lesion. This is an important mechanism in the occurrence and development of T2DM vascular lesions[20]. MCP-1 mainly attracts monocytes and T lymphocytes, and induces monocytes and endothelial cells to express adhesion molecules. It can promote various inflammatory cells, especially monocytes, to aggregate in the lesion sites, and respond to stimulation of the inflammatory cytokines[21]. In addition, MCP-1 can promote peripheral blood mononuclear cells to adhere, chemoattract and migrate to the intima, and then phagocytose lipids and transform into foam cells[22]. The activated leukocytes and vascular wall cells can release a variety of growth factors, which promote vascular smooth muscle cell proliferation, stimulate inflammation[23], and participate in the occurrence and development of atherosclerosis. It has been found that MCP-1 plays an important role in atherosclerosis in diabetes, and can be used as a useful index for predicting T2DM subclinical atherosclerosis[24]. At the same time, MCP-1 is considered to be a potential biochemical marker for reflecting early atherosclerotic changes and prognosis[25].

TCM believes that the prethrombotic status of T2DM is similar to the blood stasis syndrome of emaciation-thirst disease. The pathogenesis of emaciation-thirst disease is that the dryness-heat, impairment of yin, and body fluid scorching will cause blood viscosity and blood stagnation. The long-term yin deficiency injures the healthy qi, leading to qi and yin deficiency and weakness, which aggravate the blood stasis. Deficiency of yin affects yang, and insufficiency of yang brings about cold syndrome. The cold coagulation causes blood stasis. The blood stasis is present throughout the disease course, and is a common pathological product and pathogenic factor of emaciation-thirst disease. In the treatment of this disease, supplementing qi, nourishing yin, invigorating blood circulation and dissolving stagnant blood should be carried out, and the treatment emphasis should be focused on regulating qi-blood circulation and improving blood circulation. DJCs are composed of Radix Pseudostellariae, Radix Rehmanniae, Cortex Moutan, Dodder, Alisma, leech and others. Radix Pseudostellariae can invigorate the qi of the spleen and kidney. Radix Rehmanniae can nourish the yin of the spleen and kidney. Dodder can tonify the kidney to arrest spontaneous emission. Cortex Moutan and leech can promote qi circulation, invigorate blood circulation, dissolve stagnant blood, and resolve kidney collateral obstruction. Alisma can clear heat and purge phlegm. The whole prescription can supplement qi and nourish yin, invigorate blood circulation and dissolve stagnant blood, thus achieving the efficacy of balancing yin and yang, dispelling blood stasis, and making the kidney pulse unobstructed. Modern pharmacological research shows that Radix Pseudostellariae, Radix Rehmanniae and Alisma have certain antidiabetic and antihypertensive effects. Moutan bark can inhibit a cyclo-oxygenase reaction, thus inhibiting platelet aggregation. The hirudin contained in leech can inhibit the effect of thrombin on fibrinogen, impede blood coagulation, and prevent thrombus formation. In addition, Leech also secretes a histamine-like substance, which can directly expand the blood vessels, activate plasmin, and inhibit collagen synthesis, thus reducing the blood viscosity and improving the hemorheology.

Results of this study have shown that, after treatment with DJCs, FINS and IRI levels are significantly lower than those obtained from basic treatment, with an increase in HDL level. In addition, after treatment with DJCs, the whole blood high shear specific viscosity, plasma specific viscosity and hematocrit, as well as TM, vWF and P-selectin expression levels are significantly reduced, with downregulated peripheral blood MCP-1 mRNA expression. This indicates that DJCs can alleviate lipid metabolism disorders, downregulate expression of TM, vWF, P-selectin and MCP-1 mRNA, lower whole blood viscosity and plasma specific viscosity, reduce hematocrit, antagonize platelet activation, inhibit platelet aggregation, and protect vascular endothelial cells, thus intervening in the newly diagnosed T2DM subclinical vascular lesions. It is believed that this therapy, by supplementing qi, nourishing yin and invigorating blood circulation, can enhance the anticoagulant and fibrinolytic activity, intervene in the hypercoagulable state, and improve the function of impaired endothelial cells. This has important significance in delaying vascular complications associated with T2DM.

The occurrence and development of type 2 diabetes mellitus (T2DM) is accompanied by an inflammatory response, which in turn promotes the process of T2DM. Monocyte chemoattractant protein (MCP)-1 is a member of the CC chemokine subfamily, and is a key cytokine mediatior of the inflammatory response. MCP-1 also belongs to the chemokine superfamily. As shown in a large number of experimental studies, MCP-1 is a risk factor for the occurrence and development of insulin resistance, T2DM and related vascular complications.

This study has important significance for comprehensive understanding of the efficacy of Danzhijiangtang capsules (DJCs) and illuminating the multichannel and multitarget regulating effects of traditional Chinese medicine on newly diagnosed T2DM subclinical vascular lesions.

In recent years, thrombomodulin has been confirmed as a molecular marker of endothelial cell injury. In addition, it can be used as a marker for judging the atherosclerosis severity of peripheral arteries and coronaries, and a sensitive detection index for the occurrence of vascular complications.

This manuscript describes a traditional Chinese medicine DJCs for treatment of T2DM subclinical vascular lesions, and it has significant research interest.