Cathelicidins, are host defense peptides synthesized and stored in circulating leukocytes and numerous types of epithelial tissues in particular the gastrointestinal (GI) tract and skin. They have been known for their antimicrobial activities against a variety of microbes. Recently it was discovered that they have other significant biological functions and produce appealing pharmacological actions against inflammation and cancer in the GI tract through defined mechanisms. Experimental evidence shows that these actions could be tissue and disease specific and concentration dependent. This article reviews some of the physiological functions of cathelicidins and also their therapeutic potential in the treatment of inflammation and cancer and also the delivery system for this peptide as targeted therapy for various disorders in the GI tract both in animals and humans.

Core tip: Cathelicidin is one of the most important host defense peptides known today. It carries multiple and yet unique biological functions against pathogens which contribute to the induction and also progression of infection, inflammation and cancer, the three major types of diseases in mankind. Deficiency of such peptide would cause multiple dysfunctions in the body. In this review we highlight the physiological role and therapeutic potential of cathelicidin in inflammation and cancer and also mucosal repair in the gut. All these information would shed new lights on the development of cathelicidin as therapeutic agent for different disorders in the gastrointestinal tract.

Cathelicidins are innate immunity peptides. They are antimicrobial peptides (AMPs) that are produced by organisms as part of the defensive mechanism against various pathogenic microbes in humans and animals[1,2]. This class of pleiotropic peptides provides the first-line defense against infection by eliminating pathogens. Each AMP is encoded by a distinct gene. They show a great diversity in structures but have some common features, including: (1) relatively small molecular sizes (usually less than 50 amino acid residues); (2) cationic nature; (3) amphipathic helix structure; and (4) a substantial portion of hydrophobic amino acids[2,3]. Human cathelicidin (LL-37) consists of a long amphipathic helix spanning residues 2-31 with the C-terminal residues 32-37 unstructured. Another feature is that the structure is curved with a train of hydrophobic side chains. Such a cationic structure is perfect to associate with anionic micelles[4]. Indeed the cationic cathelicidin reacts electrostatically with anionic membrane components in particular cancer cells and microbes to disrupt cell membranes and induce cell death, while normal cells are neutral[5,6]. This specific property would enable cathelicidins directly and selectively attack membranes of microbes and cancer cells but spare the normal cells[7]. This uniqueness would make these peptides naturally exist and relatively non-toxic to normal mammalian system and have significant clinical implications as therapeutic agents for various diseases in particular those bacterial-related inflammation and cancer in the gastrointestinal (GI) tract[1,4,8].

CATHELICIDIN IN THE GI TRACT

Cathelicidins, a family of host defense peptides naturally expressed by cells of the GI tract. LL-37 is the mature form of human cathelicidin. It is produced constitutively by differentiated surface and upper crypt epithelial cells in the colon and by the Brunner glands in the duodenum[9]. In normal stomach, the expression of the peptide is restricted to differentiated surface of various types of cells including epithelial cells, chief cells and parietal cells and is also present in the gastric secretion. They are upregulated during infection, inflammation and wound healing both in animals and humans[9-12]. These biological responses to external challenges could have significant implications as a host defense in protection against different disorders in the GI tract.

Wound repair is a crucial adaptation to tissue damage. Based on the above information it comes to no surprise that soluble peptides like cathelicidins could evolve to orchestrate wound healing in response to mucosal damage in the GI tract. Along this line, LL-37 and mouse cathelicidin (mCRAMP) are strongly expressed in skin epithelium during wound healing in humans and mice[13]. In addition, the expression of LL-37 is low or absent in chronic ulcers, and antibodies to this peptide inhibit post-wounding re-epithelialization[14].

Induction of angiogenesis by cathelicidin further highlights its potential role in wound repair[15]. In this context, it has been proposed that the healing-promoting effect of the peptide may be mediated through modification of growth factor and receptor interactions[16,17]. However the exact mechanisms by which cathelicidins promote wound healing have not yet been fully clarified. A recent study conducted by Yang et al[11] in 2006 showed that rat cathelicidin can promote gastric ulcer healing in rats through induction of cell proliferation and angiogenesis. The same peptide stimulates cultured gastric epithelial cells through a transforming growth factor α-dependent transactivation of epidermal growth factor and its related pathway to induce proliferation of gastric cells[11].

Experimental evidence shows that cathelicidin can modulate inflammation by altering cytokine response and chemoattraction of inflammatory cells in diseased tissues[1,18,19]. A recent study demonstrates that bacterial DNA upregulates cathelicidin expression via a Toll-like receptor and mitogen-activated protein kinases/Erk pathway in colonic murine mucosa[20]. Clinical study also showed that cathelicidin expression was altered in inflammatory bowel diseases (IBD) patients. It was increased in both inflamed and non-inflamed mucosa in ulcerative colitis (UC) patients but not in Crohn’s disease patients. The distribution of cathelicidin was also changed. Cathelicidin mainly expressed in the upper crypt of colons in healthy people in contrast to the basal part in IBD patients[21]. In another study, deficiency of cathelicidin in mCRAMP-knockout mice present more severe symptoms and mucosal disruption than the wild-type mice in response to dextran sulfate sodium challenge to induce UC. The inflammatory cytokines and the number of apoptotic cells are increased together with mucus secretion and gene expression are impaired. All these abnormalities are reversed by intrarectal administration of mCRAMP or mCRAMP-encoding plasmid[22]. On the other hand the increase of endogenous cathelicidin by agents such as butyrate and vitamin D has been suggested to modulate inflammatory responses either induced by chemical or bacteria in colonic cells[21,23-26]. Indeed butyrate treatment has been demonstrated to improve rectal histopathology in humans and eradicate Shigella in vitro[23,24] and vitamin D can prevent mucosal injury in chemical-induced acute colitis in mice[25].

The peptide also significantly reduces the increased number of fecal microflora in UC animals[27]. Indeed exogenous cathelicidin modulates Clostridium difficile (C. difficile) colitis. In addition, C. difficile-induced colitic mice treated with cathelicidin inhibits toxin A-associated intestinal inflammation[28]. In view of the current UC therapies mainly focus on relieving the inflammatory responses or reducing the pathogenic microbes, cathelicidin would have both actions, and it further promotes the mucosal defensive mechanism through mucus secretion via a MAP kinase pathway[29]. All these actions would provide us a better therapeutic option in the treatment of inflammation in the colon. In this context, Cho and his group develop a new form of transporting system for this peptide by combining a probiotic Lactococcus lactis with cathelicidin gene into a single preparation. This preparation given orally instead of intrarectal administration[22] produces similar protection against UC in mice[30]. In a similar approach, we have applied the same mCRAMP-secreting strain of Lactococcus lactis to reduce H. pylori density in the stomach as well as the associated inflammatory cell infiltration and cytokine production[31]. These findings show the feasibility of using the transformed food-graded probiotic to deliver cathelicidin to the diseased organs and exert targeted therapy. This new biological preparation would have significant clinical applications in the future as potential therapeutic agent to alleviate inflammation induced by H. pylori infection in the stomach and bacteria overgrowth in the colon.

Although studies have demonstrated that LL-37 could promote tumorigenesis in some cancers including lung and breast cancers as well as epithelial ovarian cancer[32-34]. Other reports have shown that LL-37 may induce cell death in many tissues. In human airway epithelial cells, LL-37 has been shown to result in apoptotic TUNEL positive cells in a caspases-dependent manner[35]. Analogue of LL-37 could induce the caspase-independent apoptosis in an oral squamous cell line SAS-H1 but not normal cells[36]. The anti-tumorigenic effect of LL-37 is dependent on its ability to induce DNA break and mitochondrial damage in Jurkat T leukemia and A549 cells which are independent of caspase activation[37]. It is likely that low tissue expression of LL-37 could promote tumor formation. Indeed downregulation of LL-37 in cancer tissues has also been reported in the GI tract. In normal gastric mucosa, LL-37 is expressed in surface epithelial cells and chief cells as well as parietal cells in the fundic glands. Immunochemical staining of LL-37 has revealed that the expression of LL-37 is down-regulated in gastric hyperplastic polyps, tubular adenomas, and adenocarcinomas[12]. After H. pylori infection, LL-37 is markedly up-regulated in the epithelium and gastric secretions. Such upregulation could not be detected in patients with H. pylori-independent gastric inflammation. Moreover, a higher level of LL-37 expression has been demonstrated in wild-type H. pylori infection of cultured gastric epithelial cells and this higher production of LL-37 requires an intact type IV secretion system[4,12]. Therefore, it is indicated that expression of LL-37 may be in a tissue- and disease-specific manner.

Our recent study shows that LL-37 may function as a putative tumor-suppressing gene in gastric carcinogenesis. We found that exogenous LL-37 inhibits proliferation and induces G0/Gi-phase cell cycle arrest through a defined signal pathway in gastric cancer cells (Figure 1). Furthermore depletion of endogenous LL-37 stimulates gastric cancer cell DNA synthesis suggesting that the antiproliferative effect of LL-37 occurs at physiological concentrations. The direct anti-cancer action has also been confirmed in a gastric xenograft cancer model in nude mice[38]. In the lower GI tract, it has been shown that LL-37 is strongly expressed in the human normal colon mucosa but downregulated in colon cancer tissues. In both settings it is correlated with the number of apoptotic cells in colonic mucosa. To this end, the pro-apoptotic activity of LL-37 is confirmed in colon cancer cells in which the peptide activates a GPCR-p53-Bax/Bak/Bcl-2 signaling cascade that triggers off the AIF/EndoG-mediated apoptosis in colon cancer cells[39]. All these findings suggest that cathelicidin could be a tumor suppressor gene in the stomach and colon. Supplementation of which would have a great potential as a therapeutic agent for gastric and colon cancers. 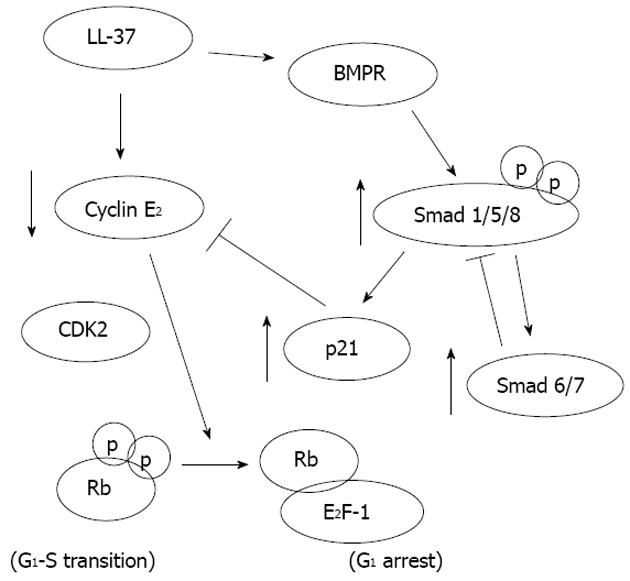 The host defense peptide cathelicidin is highly expressed in the GI mucosa. This peptide and its recombinant protein in a deliverable preparation represent an appealing option for the treatment of inflammation and cancer and also promotion of mucosal repair in the GI tract (Table 1). This is especially true for those diseases associated with bacteria including gastritis and UC. Depletion of cathelicidin by unknown epigenetic mechanisms in the gastric and colonic tissues could be one of the causative factors in the promotion of inflammation and carcinogenesis in both organs. Supplementation with this host defense peptide orally through an effective delivery system seems to be a promising approach to treat different disorders in the GI tract.