Turner syndrome (TS) is a female chromosomal disorder caused by the lack of an X chromosome. The loss of this chromosome may result in the deficiency of tumor-suppressive or DNA repair genes, leading to tumorigenesis. Recombinant human growth hormone (GH) has been popularly used for treatment in TS patients for growth promotion. Although treatment with GH has been correlated with precancerous and cancerous lesions in TS children, its associations with gastric or colonic tumors, especially ileal tubular adenomas, have not been reported frequently. We here report a case of a 16-year-old patient with TS and tubular adenoma of the small intestine. Whether the ileal adenoma was caused by TS itself or GH therapy was discussed.

Turner syndrome (TS) is a female chromosomal disorder in which all or part of the X chromosome is missing. Clinically, it is not uncommon for patients with TS to develop tumors from various tissues. In adults with TS, gastric or colonic tumors have been reported. However, these tumors are rarely reported in children, and the occurrence of ileal tubular adenoma in pediatric TS patients has not been described. In this case report, ileal tubular adenoma was detected in a 16-year-old girl with TS after receiving growth hormone (GH) therapy for three years. Whether the ileal adenoma was caused by TS itself or GH therapy was discussed.

A 16-year-old girl first admitted to the hospital in July 2009 because of short stature. On admission, she was 127.5 cm in height and 25 kg in weight. Her bone age was 9 years. Ultrasonography revealed a small uterus and right ovary and possible absence of left ovary. A chromosomal analysis showed genetic mosaicism of the X chromosome, namely 46Xi (45X, 46XX). Diagnosis of TS was made and daily nocturnal GH injections were initiated. In 2 years, the patient gained 10 cm in height.

In the patient’s health history, she experienced per rectal bleeding at the age of 9 mo that had subsided spontaneously and no definitive diagnosis was made. The patient also had recurrent abdominal cramping associated with loose bowel movements, although the pain usually subsided spontaneously. In August 2009, an ultrasonogram was performed when the abdominal pain became more severe, and an abdominal mass on the right side was noted and suggested intussusception. The pain and mass disappeared spontaneously and no further treatment was undertaken.

The patient again developed abdominal pain on January 27, 2012. The pain was para-umbilical, colicky and associated with bloody stool. There was no tenesmus, and the abdominal colic dissipated after bowel movements. The blood in the stool appeared bright red in color. The patient vomited twice and the vomit contained no blood. She also had a fever of 38 °C and was admitted to the hospital for investigation of gastrointestinal bleeding in February 2012.

On admission, her general condition was normal. There was developmental delay in height and no secondary sexual characteristics were noted. Intellectually, her development was normal. Other features of TS were not evident.

On admission, her blood test revealed a hemoglobin level of 79 g/L, positive stool occult blood, white blood cell 10-15/high power, red blood cell 3-5/high power, and no macrophages. Stool culture was negative. Coagulation function was normal. The patient had several dark-colored, bloody bowel movements after admission and abdominal pain that was relieved after bowel movement. She also vomited several times after admission, and the vomit consisted of ingested food. No coffee-ground material was noted. A radionuclide scan for Meckel’s diverticulum was negative.

Since she has a history of administration of GH, both insulin-like growth factor-1 (IGF-1) and IGF binding protein levels were checked and both were within normal limits (119 ng/mL and 3.05 μg/mL, respectively). Gastroscopy revealed gastritis and a positive rapid urease test for Helicobacter pylori. In ileocolonoscopy, the ileocecal valve was petulant and a large polyp was seen in the terminal ileum (Figure 1A). The polyp shifted in position and was soon noted to have retracted to a more proximal position. It was not seen again until the colonoscope had advanced to more than 10 cm proximally. 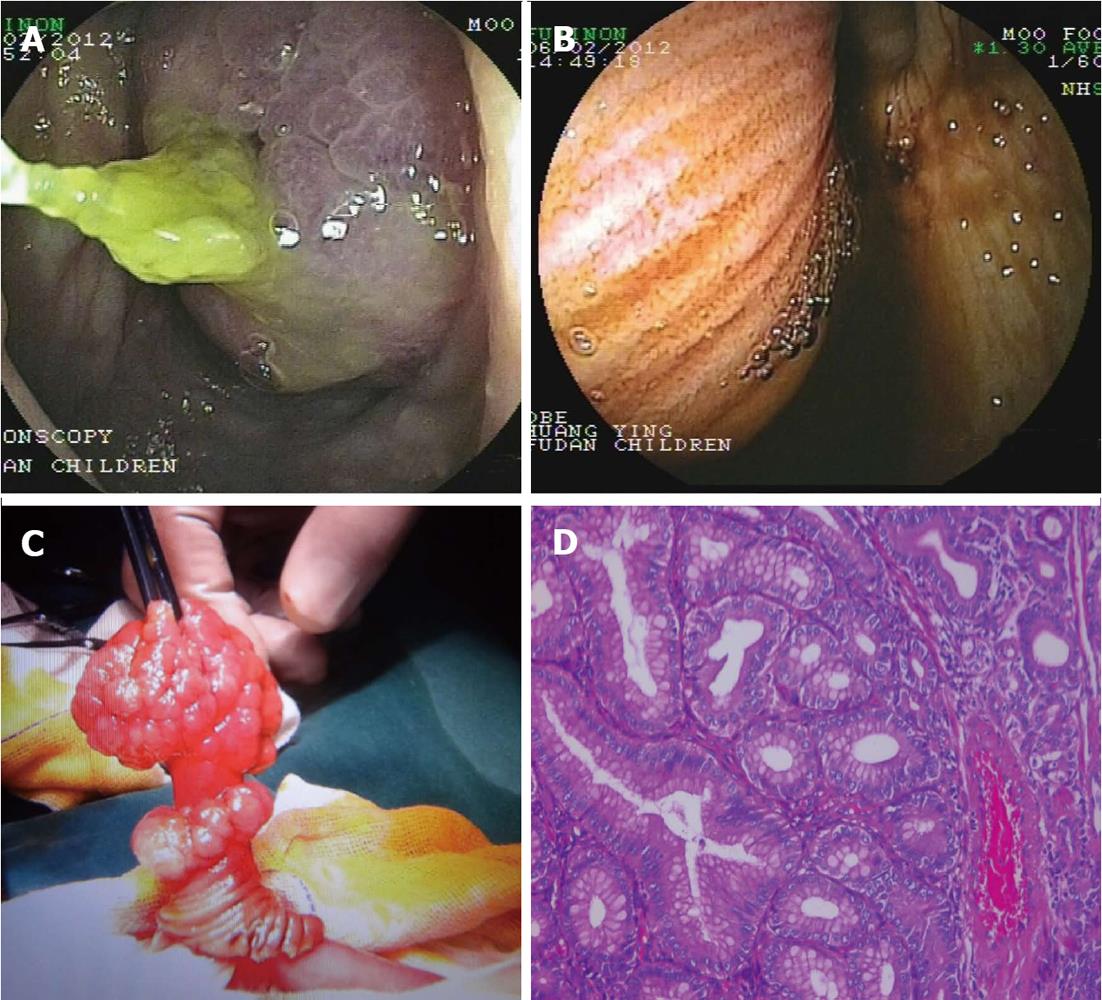 Figure 1 The image of the polyp. A: A large polyp was seen in the terminal ileum when ileocolonoscopy was performed. The tumor appeared hyperemic; B: Double balloon enteroscopy was performed through the anus. The enteroscope was advanced to the ileocecal region and a mass covered with small intestinal mucosa was seen protruding through the ileocecal valve. The appearance was indicative of intussusception; C: A polyp of about 2 cm × 4 cm in diameter and 55 cm from the ileocecal region was seen during operation, with a wide base and multi-nodular appearing surface. The pedicle also appeared nodular; D: Histopathological section of the polyp showing pleomorphic glandular hyperplasia with formation of nodules. The polarity of cell was well presented (hematoxylin and eosin stain, original magnification, × 200).

Enhanced computed tomography and ultrasound of the abdomen were both suggestive of intussusception of the small intestine with a focal segmental increase in the thickness of the bowel wall. A double-balloon enteroscope was advanced through the anus to the ileocecal region. There a mass covered with small intestinal mucosa was seen protruding through the ileocecal valve (Figure 1B). The appearance was indicative of intussusception of the ileum into the colon and an operation was performed to reduce the invagination. Further examination of the small intestine found a mass of about 2 cm × 4 cm in diameter 55 cm from the ileocecal region. The intestinal segment was decompressed and opened. A small bowel polyp with a wide base and multi-nodular appearing surface was observed (Figure 1C). The pedicle also appeared nodular. The whole segment of small intestine was resected with the polyp in situ.

TS is a female chromosomal disorder and is caused by the lack of an X chromosome. It causes delays in both general growth and sexual development. TS is characterized by physical abnormalities such as short stature, swelling of the hands and feet, a broad chest, low hairline, low-set ears, and a webbed neck. Girls with TS typically experience gonadal dysfunction, which results in primary amenorrhea and sterility.

Many tumor-suppressive and DNA repair genes are located on the X chromosome; the lack of one or many genes may result in chromosomal instability and the deficiency of critical DNA repair mechanisms. Therefore, TS may be associated with oncogenesis in some patients[1]. Clinically, TS has been associated with some tumor types[2-4] with the most common tumors arising in the sex glands. However, other reports have found that patients with TS have a higher incidence of tumors of the central nervous system (including ophthalmic tumors) and of the bladder and urethra. Some reports indicated that adults with TS have a higher incidence of gastric or colonic tumors, although the mechanism is not clear[5] and the association was not common in children[6-8]. Importantly, ileal tubular adenoma in patients with pediatric TS has not been described. The reported and present pediatric cases in the literature are summarized in Table 1.

Recombinant human GH has been popularly used in TS patients for growth promotion. GH exerts its action through binding and activation of its receptor (hGHR), which is ubiquitously expressed in the human body. In TS patients, GH is therapeutically used for growth enhancement, especially for height. GH also influences many metabolic processes, and its association with tumorigenesis has been the subject of intensive research. In patients with acromegaly, the incidence of precancerous (adenomatous polyps) and cancerous lesions in the colon is increased[9]. Carroll et al[10] reported that GH deficiency in mice reduced the incidence of colonic tumors. Likewise, hGHR expression in patients with colonic cancer is upregulated, and its expression level is positively correlated with the stage and differentiation of the tumor[11]. A cohort study by Swerdlow et al[12] that followed 1848 patients receiving GH treatment determined that the incidence and mortality of both rectal and colonic tumors were increased compared with the non-treated patients. These studies suggest that GH may be related to the pathogenesis of gastrointestinal tumors. Moreover, IGF-1 is an important mediator of the action of GH and has been implicated in the pathogenesis, development, invasion and metastasis of many human tumors. In China, studies have demonstrated that IGF-1 mRNA expression level was higher in gastric cancer tissues in contrast to non-tumorigenic tissues[9]. Other studies have also demonstrated that IGF-1 receptor expression in colonic cancer is elevated and that this over-expression results in tumor cell growth, independent of other growth factors such as platelet-derived growth factor, basic fibroblast growth factor, and epidermal growth factor[13].

Conversely, insulin-like growth factor binding proteins (IGFBPs), particularly IGFBP-3, can inhibit IGF-stimulated growth of tumor cells, facilitating apoptosis[14]. Although the role of the GH-IGF-1 axis in gastrointestinal tumors has not been well defined, evidences from both basic and clinical studies[15] indicate that it may play an important role in the pathogenesis of these tumors because GH enhances tumorigenesis through the action of IGF-1; IGF-1 induces tumorigenesis in the absence of GH; and IGFBP-3 inhibits tumorigenesis.

In conclusion, a small intestinal tumor was detected in a 16-year-old TS patient who had received GH therapy for three years. The patient had a history of per rectal bleeding, recurrent abdominal pain, and intussusception, which indicated the presence of an intestinal polyp. Although neither IGF-1 nor IGFBP-3 levels were elevated, their effects on tumorigenesis could not be ruled out. As the concentration of free IGF is proportional to the ratio of IGF-1/IGFBP-3, and IGF-1 impacts both growth and tumorigenesis, these factors shuld be closely monitored in patients receiving GH treatment. Future studies should address the relationship between GH therapy, the IGF-axis, and incidence of intestinal carcinomas.