AIM: To investigate the expressions of leptin and peroxisome proliferator-activated receptor γ (PPARG) in relation to body mass index (BMI).

METHODS: We evaluated leptin and PPARG expression in 30 adenomas over 1 cm in size by immunohistochemical staining. In addition, clinicopathologic features including BMI were assessed.

CONCLUSION: BMI has influenced on the leptin expression of colorectal adenoma. The exact mechanism underlies the strong correlation between leptin and PPARG expression needs further study.

Colorectal cancer is a major cause of cancer-related mortality and morbidity[1]. Many Asian countries, including South Korea, China, Japan, and Singapore, have experienced an increase of 2 to 4 times in the incidence of colorectal cancer during the past few decades[2]. Obesity is a risk factor of colorectal cancer and colorectal adenoma, and is an independent poor prognostic variable in colorectal cancer survivors[3-5]. Although mechanism by which obesity increases the risk of colorectal cancer is not clearly understood, obesity-induced changes in hormonal metabolism are known to distort the normal balance between cell proliferation, differentiation, and apoptosis[3]. Circulating levels of insulin, insulin-like growth factor, and leptin are increased in obesity and may mediate the increased risk of colorectal cancer[6,7]. Leptin plays a central role in mammalian feeding behavior and energy expenditure[8]. In addition to its neurohormonal action in the brain, several in vitro studies have shown that leptin can act as a mitogenic, antiapoptotic, and tumorigenic factor for different cancer cell lines[9,10]. Moreover, leptin is overexpressed in human colorectal cancer[11], and its expression gradually increases during the transition from normal adenoma to adenocarcinoma, suggesting that it is associated with colorectal carcinogenesis[12]. Interestingly, however, high leptin expression in colorectal cancer is an indicator of favorable tumor features and better survival in colorectal cancer patients[12]. One interesting fact revealed in our previous study was that there was a linear trend between leptin expression of colorectal adenomas and patients’ body mass index (BMI)[13]. This suggests that obesity postulated from high BMI can affect tumorigenesis through local leptin activity.

Peroxisome proliferator-activated receptor γ (PPARG) is a member of the nuclear hormone receptor PPAR superfamily[14]. PPARG plays an important role in adipose cell differentiation, modulation of metabolism, modulation of the inflammatory response, and cellular apoptosis[15,16]. Unlike leptin, PPARG is involved in cell cycle regulation and cellular differentiation in colonic epithelium, supporting its antineoplastic effect[15,17,18]. Therefore, some researchers have tried to use PPARG agonists as chemotherapeutic agents for malignancy[19]. Moreover, the overexpression of PPARG in colorectal cancer is independently correlated with longer survival of patients, so PPARG expression appears to mark an indolent subset of colorectal cancers as dose leptin expression[20].

Thirty patients with colorectal adenomas of over 1 cm in size were enrolled in this study. All patients, less than 55 years old, were diagnosed and treated by polypectomy or endoscopic mucosal resection at the Seoul Paik Hospital (Seoul, South Korea) between August 2007 and August 2008. We excluded adenomas, which had carcinomatous components. All tissue samples were formalin fixed and paraffin embedded. Hematoxylin and eosin (HE) slides, pathologic reports, and medical records were retrospectively reviewed to confirm the diagnosis and clinicopathologic parameters including age, gender, BMI, adenoma location, adenoma size, pathologic type, and dysplasia grade. We followed the guidelines for human studies and animal welfare regulations. Subjects had given their informed consent, and the study protocol had been approved by the institutional review board on human research.

The most representative area of each adenoma was carefully selected and marked on a HE stained slide. Core tissue biopsies (2 mm in diameter) were taken from the corresponding donor blocks and arranged in a new recipient paraffin block (tissue array block) using a trephine apparatus (SuperBioChips Laboratories, Seoul, South Korea). Duplicate tissue cores were taken from each donor block to minimize the limitations of identifying a representative area of the tumor. 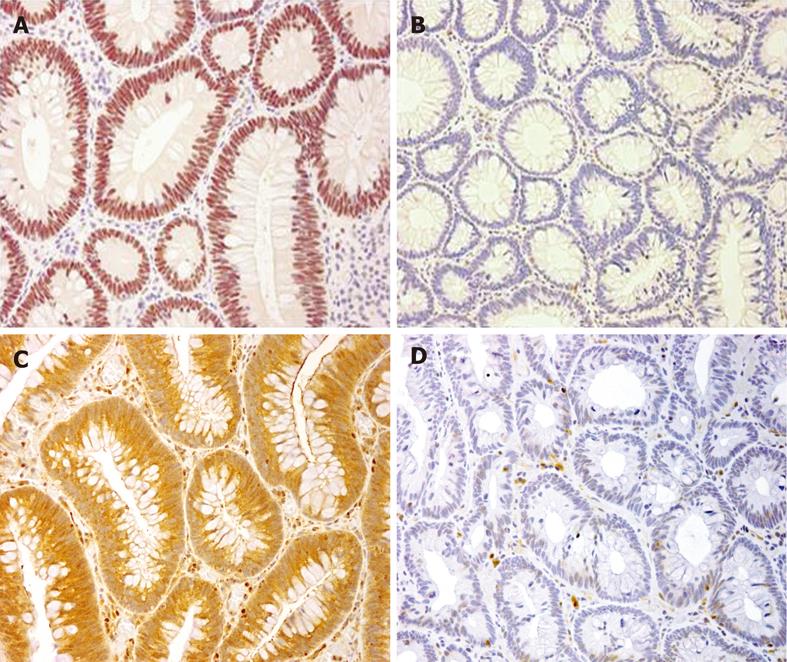 Statistical analysis was performed using the Statistical Package for the Social Sciences (SPSS) software (version 12.0, SPSS, Chicago, IL, United States). The relationship between PPARG and leptin was evaluated using the Fisher’s exact test. The relationships of PPARG or leptin with clinicopathologic features were investigated by the Fisher’s exact test and t test. Two tailed P values less than 0.05 were regarded as statistically significant.

The study sample included 23 male and 7 female patients. Patient age ranged from 29 to 53 years (44.6 ± 6.5 years). Tumors consisted of 25 tubular adenomas and 5 villotubular adenomas. Seventeen adenomas located in the left colon: transverse, descending and sigmoid colon and rectum, and 13 adenomas located in the right colon: cecum and ascending colon. The sizes of adenomas ranged from 1 to 2.5 cm (1.2 ± 0.3 cm). The number of polyps ranged from 1 to 5 (2.2 ± 1.4). Thirteen adenomas showed low grade dysplasia. Seventeen adenomas had intermediate grade dysplasia or high grade dysplasia. There were no polyps containing carcinoma-in-situ. These results were described in Table 1. 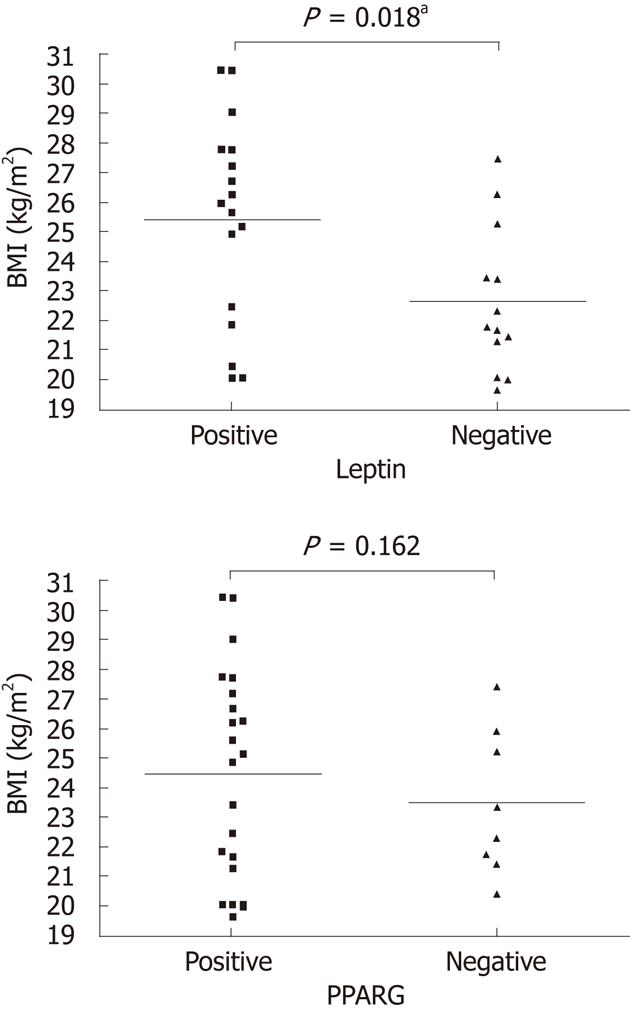 Several studies of leptin expression in cancers have suggested that local rather than endocrine leptin might play a significant role in breast tumorigenesis[21]. More specifically, both leptin and leptin receptor were found in breast tumors, indicating that leptin could influence cancer cells through autocrine or paracrine mechanisms[21-23]. However, given the induction of leptin overexpression by obesity-related stimuli, it is reasonable to also consider systemic effects on leptin expression[23].

When we divided adenomas into low and intermediate/high dysplasia grade groups, leptin was expressed more frequently in the intermediate/high grade dysplasia group. Interestingly, the ratio of overexpressed leptin was gradually increased from normal mucosa, to adenoma, to carcinoma[11,12]. Therefore, increased leptin expression ratio from low grade to intermediate/high grade dysplasia appears to follow the pattern of increased leptin expression from normal mucosa to adenoma, to carcinoma by stages. Moreover, this may connote that as dysplasia progresses, autocrine or paracrine mechanisms of leptin may thus be progressively enhanced in colorectal adenomas.

In our study, PPARG expression was positively correlated with leptin expression in colorectal adenomas, but was not correlated with high BMI or adenoma dysplasia grade. PPARG and leptin functionally intersect via the Janus-activated kinase/signal transducers and activators of transcription (JAK/STAT) pathway. Leptin signaling is transmitted mainly by the JAK/STAT pathway[27] and terminated by the induction of suppressor of cytokine signaling-3[28]. In contrast to leptin, PPARG agonists inhibit cytokine-induced activation of the JAK-STAT pathway[29] and STAT-3[30]. These findings show that leptin and PPARG clearly affect the JAK/STAT pathway in different ways and possibly interact each other by unrevealed feedback mechanisms[31]. Regarding 2 molecules, several recent studies revealed that leptin might exert an inhibitory effect on PPARG protein expression. Zhou et al[32] suggested leptin induced extracellular signal-regulated kinases (ERK) 1/2 activation, which cause the subsequent decline in PPARG expression in hepatic stellate cells. In addition, leptin could inhibit the PPARG expression in TallyHo/Jng mouse[33]. On the other hands, PPARG ligands has the inhibitory effect on leptin induced hepatic stellate cells proliferation through the reversion of ERK 1/2 activation[33,34]. However, molecules may interact via different mechanism or interact with each other differently depend on cells or organs. Therefore, to clarify the exact mechanism between leptin and PPARG in colorectal adenomas, we think that additional in vitro studies are needed.

There were several limitations in our study. First of all, enrolled numbers in this study was relatively small. We wanted exclude the age factor which strongly influence on development of colorectal adenoma and carcinoma. Indeed, the prevalence of colorectal adenoma in Korea revealed that most colorectal adenomas were detected in aged group[35]. To determine the pure effect of obesity on leptin and PPARG expression in colorectal adenomas, we enrolled the patients who were under age of 55. However, information from 30 cases was enough to generate appropriate statistical values. Second, limitation was that we were able to investigate the only one indicator of obesity, BMI. Other variables accessing obesity such as wait circumference and waist-hip ratio were not investigated due to lack of information. Third, we did not investigate a control group. If we had evaluated leptin and PPARG expression in hyperplastic polyps or normal mucosa, we would establish specific criteria for the overexpression of 2 molecules in the present study. Fourth, there was no in vitro study about the interaction of PPARG and leptin. These two molecules may affect the JAK/STAT or ERK 1/2 pathways in different ways and possibly interact each other by unrevealed mechanisms. In this study, however, we did not evaluate the mechanism regarding the relationship of leptin and PPARG expression in the development of colorectal adenoma. Our study suggested the correlation between PPRAG and leptin expression but could not explain the causal relationship. For understanding the causal relationship, in vitro study should be performed in the near future.

Colorectal cancer is a major cause of cancer-related mortality and morbidity. Leptin regarded to be associated with colorectal carcinogenesis. Unlike leptin, peroxisome-proliferator-activated receptor γ (PPARG) is involved in antineoplastic effect. Despite the antagonistic effects on the development of neoplasm, the expressions of PPARG and leptin are related with favorable prognosis respectively. This phenomenon suggests that the possible interaction of PPARG and leptin in the development of colon cancer and adenoma.

The study is the first to evaluate simultaneous leptin and PPARG expression in colorectal adenomas in relation to BMI and characteristics of adenomas. Based on the strong correlation between leptin expression and high BMI, we postulated that energy accumulation might induce overproduction of leptin in colorectal adenomas. The correlation between leptin and PPARG expression suggests a possible interaction between these 2 molecules during the development of adenomas, likely mediated by the janus-activated kinase / signal transducers and activators of transcription or extracellular signal-regulated kinase 1/2 pathway.