Endosonography was applied using ultrasound endoscopes [the Olympus GF-UM200, GF-UCT240-AL5 and GF-UE260-AL5 (7.5 MHz; Olympus Optical Co. Japan)]. EUS scanning showed many features that were evaluated, including the following: presence or absence of mucosal ulceration; the regularity of the marginal border (regular or irregular); the presence of lobulation of the surface; the shape of the tumor (oval to round or non-oval distorted); the presence of a marginal halo, echogenicity (hypoechoic or hyperechoic); homogeneity (homogeneous or heterogeneous); presence of internal echogenic or cystic foci; and presence of exophytic development (tumor development outside the gastric wall). Computed tomography (CT) images and radiological reports were retrospectively reviewed. The CT features were analyzed with the pattern of contrast enhancement.

Follow-up data were obtained from clinical records and from the treating doctors.

The clinicopathological characteristics of the patients and the surgical data and outcomes are summarized in Table 1. All 4 cases were female (age ranged from 32 to 50 years). One patient was asymptomatic, and the schwannoma was accidentally discovered in this patient by ultrasonic examination in the follow-up of a hysteromyoma. Three patients had symptoms including ructus, bloating and epigastric pain, weight loss, melena and hematemesis.

The patients underwent multiple examinations before surgery, but none had a correct preoperative diagnosis of schwannoma. They were misdiagnosed as having GISTs. Upper endoscopy revealed that one patient had a submucosal tumor with a central ulcer and that the other patients did not have ulceration. All the tumors were located in the gastric body (2 in the greater curvature and 2 in the lesser curvature).

The CT images showed rounded masses in the stomachs, with homogeneous (n = 3) (Figure 1A) or heterogeneous (n = 1) (Figure 1B) internal contrast enhancement. One of the masses was accompanied by enlargement of the lymph nodes. 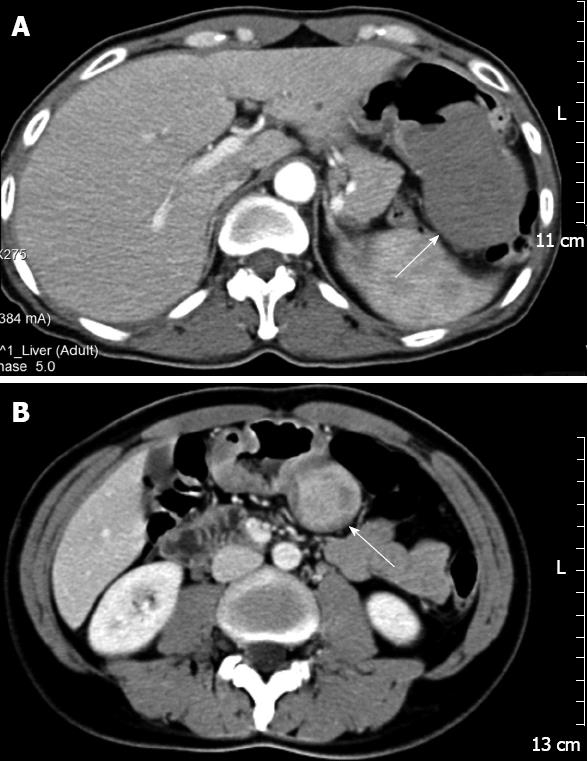 The EUS evaluation revealed that all the tumors were hypoechoic, with a connection between the tumor and the muscularis propria. The echogenicities of the tumors were heterogeneous with an internal high-echo region (Figure 2A). Two of the patients had tumors with marginal hypoechoic regions (Figure 2B). The shapes of all tumors were oval, with well-demarcated margins, and the growth patterns of the tumors were exogastric. The tumors had smooth surfaces, except one which had an ulcer. None had internal cystic lesions, lobulations, or calcification (Table 2). Endoscopic ultrasound-guided fine needle aspiration was performed in one patient, but failed to confirm the diagnosis because of insufficient tissue biopsy for immunohistochemistry.

GI schwannomas are benign, slow growing tumors regarded as tumors distinct from conventional schwannomas. These tumors arise from the nerve sheath of the gut wall, rather than from the central nervous system and from soft tissues[6]. The stomach is the most common site of origin of GI schwannomas[2]. The tumors are most commonly located in the body of the stomach[3]. The tumors predominantly occur in older adults (mean age is 58 years) with a marked female predominance[6,7]. Gastric schwannomas are usually asymptomatic or associated with non-specific abdominal discomfort. They are accidentally discovered or when complications, such as GI bleeding, arise. Endoscopically, gastric schwannomas appear as elevated submucosal masses, with or without central ulcers. Endoscopic biopsies always yield false-negative results. The definitive diagnosis of gastric schwannomas is determined by pathological and immunohistochemical examination of surgical specimens. The tumors are typically negative for CD117, desmin, α-SMA and positive for S100. They stain variably with CD34[2].

Presently, reports on the EUS features of gastric schwannomas are extremely limited, due to the rarity of these tumors. The EUS features of gastric schwannomas have been described as round submusosal masses with marginal haloes, and homogeneous internal echogenicity without internal echogenic foci[5,11]. One study indicated that the echogenicities of gastric schwannomas were much lower than the normal surrounding muscle layers. Therefore, the authors considered that these findings may be useful for differentiating schwannomas from GISTs[5]. Nevertheless, EUS findings of gastric schwannomas revealed a hypoechoic mass, with some hyperechoic foci, in some other case reports[12,13]. According to our results, the internal echogenicity of gastric schwannomas was heterogeneous and low, but slightly higher than that of muscularis propria, with internal patch high echo. They were not homogeneous and extremely low. CT imaging showed that the tumors showed homogeneous or heterogeneous contrast enhancement. This meant that these tumors were hypervascular. The blood within the schwannomas was very slow-flowing. It is usually not possible to demonstrate flow with color or power Doppler sonography. The slow flow of blood, in spite of the hypervascular nature, can be explained by the observation that the internal echoes of the four tumors appeared similar to or slightly higher than those of muscularis propria, with some patchy hyperechoic areas. Although a lymphoid cuff was observed in each patient, it was not always continuous, which may explain why the marginal hypoechoic halo was only found in two cases. All 4 gastric schwannomas in our study lacked a cystic change, indicating that cystic changes are uncommon in this type of tumor. Only 2 cases with cystic changes on CT examinations have been reported in the literature[8]. Another clinicopathogical study found no cases of cystic change or gross necrosis in 51 cases[3]. No calcification within gastric schwannomas was reported in previous reports. However, cysts, hemorrhagia, and necrosis were common in GISTs, and calcification was seen in 6% of GISTs[14]. The differential diagnosis of gastric schwannomas and GISTs in EUS images are summarized in Table 3.

In conclusion, gastric schwannomas are rare benign mesenchymal tumors of the stomach. However, it is necessary to differentiate these tumors from other submucosal tumors of the stomach, particularly GISTs. The EUS features of gastric schwannomas are varied. On EUS evaluation, heterogeneous hypoechogenicity or isoechogenicity, a well-demarcated margin, fourth-layer origination, and lack of cystic change and calcification may be considered to be helpful findings for the diagnosis of gastric schwannoma. A marginal halo was perhaps the characteristic feature, but not an essential one. Ulceration may be seen in large tumors. More EUS studies should be conducted to delineate the characteristic features that can help differentiate these mesenchymal tumors.