AIM: To investigate the role of prophylactic antibiotics in the reduction of mortality of severe acute pancreatitis (SAP) patients, which is highly questioned by more and more randomized controlled trials (RCTs) and meta-analyses.

METHODS: An updated meta-analysis was performed. RCTs comparing prophylactic antibiotics for SAP with control or placebo were included for meta-analysis. The mortality outcomes were pooled for estimation, and re-pooled estimation was performed by the sensitivity analysis of an ideal large-scale RCT.

RESULTS: Currently available 11 RCTs were included. Subgroup analysis showed that there was significant reduction of mortality rate in the period before 2000, while no significant reduction in the period from 2000 [Risk Ratio, (RR) = 1.01, P = 0.98]. Funnel plot indicated that there might be apparent publication bias in the period before 2000. Sensitivity analysis showed that the RR of mortality rate ranged from 0.77 to 1.00 with a relatively narrow confidence interval (P < 0.05). However, the number needed to treat having a minor lower limit of the range (7-5096 patients) implied that certain SAP patients could still potentially prevent death by antibiotic prophylaxis.

CONCLUSION: Current evidences do not support prophylactic antibiotics as a routine treatment for SAP, but the potentially benefited sub-population requires further investigations.

Acute pancreatitis (AP) is still a common pancreatic disease, with an increasing incidence rate during the past two decades[1]. In the United States, AP accounts for more than 220 000 hospital admissions annually[2]. Severe acute pancreatitis (SAP) composes about 20% of AP, with a high mortality rate around 20%[3]. For several decades, the administration of prophylactic antibiotics has been one of the great controversies worldwide about the management of SAP.

Totally, the mortality rate for SAP is 10% with sterile and increased to 25% with infected pancreatic necrosis[4]. Hospitalization for patients with SAP may frequently extend beyond 2 wk and often involves an intensive care unit stay and increased infection rate[4]. Up to the late period of last century, complications of infection account for 80% of deaths from AP[5]. Currently, 30%-50% of the dead cases were due to infectious complications for 2 wk from onset[6]. Therefore, theoretically, no antibiotics are indicated in mild cases, but antibiotics were considered to play an important role in either therapeutic or prophylactic intention for SAP. The recognition and exploration of antibiotic prophylaxis for SAP experienced more than a half of a century. However, there was still a gap between theory and truth, and the proper role of antibiotics in SAP remains controversial[7].

Why pancreatologists keep dwelling on this controversy? In this review, we critically estimated the currently available evidence to find out the gap between theory and clinical practice. Moreover, through our hypothesis and calculation, we predicted what would occur in antibiotic prophylaxis for SAP if robust evidence was available in the future.

The currently available meta-analyses and randomized controlled trials were analyzed by meta-analysis. The patients were all diagnosed as having SAP. The intervention group received prophylactic antibiotics. The control group received placebo or none-treatment. All potentially eligible meta-analyses or trials should report the mortality rate of each group. There were no limitations for race, age or gender. If any conditions did not conform to the above criteria or the essential data could not be extracted, the meta-analyses of trials were excluded.

All procedures were reviewed by two independent reviewers: (1) for descriptive review of available meta-analyses, the publication year, the number of included trials, and the effect sizes of mortality or infected necrosis were extracted. The effect sizes involved risk ratio (RR), odds ratio (OR), absolute risk reduction (ARR) and their 95% confidence interval (CI); (2) for updating meta-analysis, the general information including publication year, sample size, study design, general characteristics of patients, and intervention details were extracted. The dichotomous data for the mortality were extracted, including total number of participants and events for each group. The number of events was calculated by the reported percentage if possible; and (3) For the predication of the future meta-analysis, the synthesized mortality rate of each group was extracted by our updated meta-analysis.

Meta-analysis: Outcomes of eligible studies were statistically synthesized by Reviewer Manager 5.0 (The Nordic Cochrane Center, Cochrane Collaboration, Copenhagen, Denmark). The statistical method was referred to the Cochrane Handbook for Systematic Review of Intervention. The pooled statistics were calculated using a fixed effects model initially. The RR was reported for dichotomous data. The 95% CI was also calculated. The Mantel-Haenszel method was used to test significance of dichotomous data. P value less than 0.05 was considered statistically significant. Heterogeneity between comparable studies was tested in all analyses using a standard χ2 test for between-study statistical heterogeneity and considered significant at P < 0.1. If heterogeneity existed, the random effects model was used for analysis.

Sample size calculation: The format for equivalency estimate of rates between two arms is shown below. 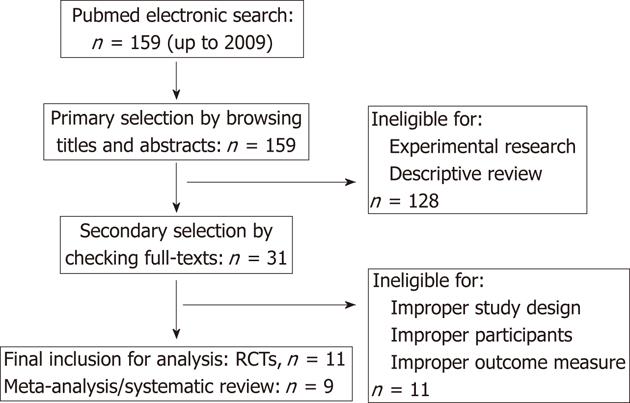 Figure 1 The flow chart of literature search and selection in PubMed.

Update on meta-analysis: To improve the robustness of evidence, the meta-analysis was updated in present review. We comprehensively searched the PubMed database to identify available RCTs on the comparison between prophylactic antibiotics and placebo/none-treatment for SAP. There were 11 eligible RCTs (Figure 1)[8-14,24-27], which were re-pooled to update the meta-analysis (Figure 2). There were two newly published RCTs in 2009[13,14], which was different from previous meta-analysis[15]. 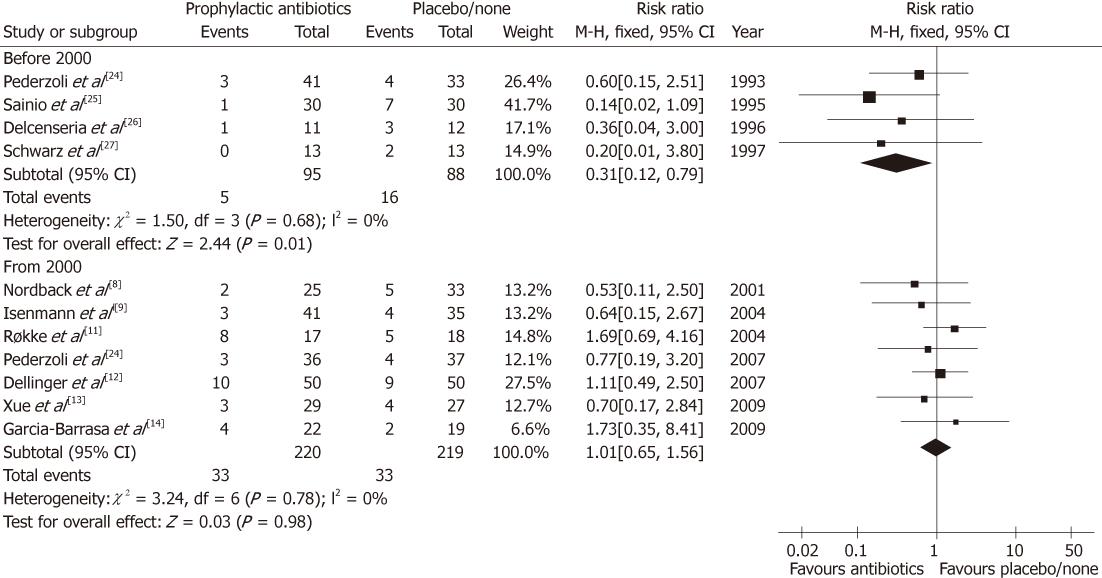 Figure 2 Updated meta-analysis of antibiotic prophylaxis vs placebo/none-treatment. The meta-analysis was stratified into two periods, i.e., before 2000 and from 2000. In the later period, no benefit was obtained from prophylactic antibiotics (RR = 1.01, P=0.98; Mantel-Haenszel test, fixed effect model, two-sided). 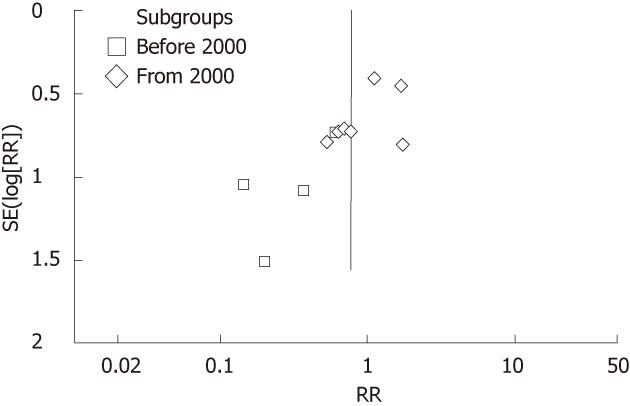 Figure 3 Funnel plot of the meta-analysis. Apparently asymmetrical distribution was found in the period before 2000.
How long a way to end the controversy?

What a scale does a trial require? To the best of our knowledge, the key to end the controversy is to conduct a large-scale RCT so as to control the random sampling error. To perform an ideal RCT, we have to calculate the required sample size by statistical approach. The mortality rates were calculated based on the pooling estimate from 2000, and the results of calculation are shown in Table 3.

In practice, it is hard to conduct a single-center randomized trial of such large scale in the study of SAP treatment. A multi-center trial might be a way out of this corner, but difficulties in quality control and possible performance bias might occur. Among the included RCTs in the above updated meta-analysis, the absolute value of difference between mortality rates |p1-p2| was 6.7% ± 5.9% (range, 2.0%-19.3%), and the mean was more than 5%. Therefore, the threshold of 10% and the sample size of 544 patients could be rational. It would take more than two years to complete a large-scale multi-center RCT.

The above meta-analysis showed a minor difference between mortality rates, |p1-p2| = 0.0007. Thus, we have to choose the lower threshold 5% to calculate the required accumulated sample size, and the calculation result indicated that the overall accumulated sample size need 3230 patients. The linear regression test showed the accumulated sample size is positively correlated with the time period (year by year from 2000) (Figure 4). If there were no larger-scale RCTs, it would take a long time to achieve the statistical goal, and the controversy would continue. 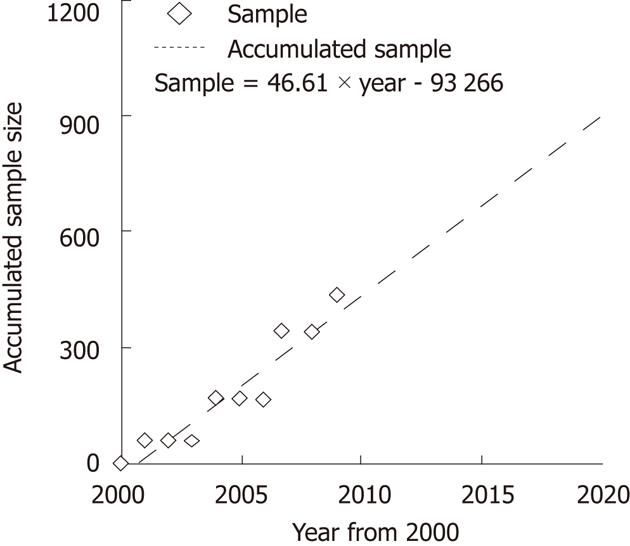 An assumed large-scale trial (sensitivity analysis): If years later a large-scale RCT is completed, how will it contribute to addressing the controversy on prophylactic antibiotics for SAP? Thus, we carried out a sensitivity analysis to estimate the margin of potential benefit from prophylactic antibiotics (Table 4). It was performed by re-pooling both the 7 RCTs from 2000 and an assumed large-scale RCT containing 544 patients for meta-analysis[8-14]. The theoretical mortality rates of assumed RCT were evaluated as follows.

Given there was obvious random sampling error, the best-worst method was used to calculate the best marginal benefit (Table 4). Since there was between-study heterogeneity (P = 0.0003), the meta-analysis was performed by random effect model. The result of sensitivity analysis showed no significant benefit of antibiotic prophylaxis for SAP (RR = 0.76, P = 0.44), which was similar with the previous meta-analyses (forest plot not shown).

If there was no random sampling error, the mortality rates would be equal to the pooling data from above updated meta-analysis (Table 4). The heterogeneity of repooling estimate was not significant (P = 0.86), so fixed effect model was used. The result of sensitivity analysis showed nearly equivalent efficacy between antibiotic prophylaxis and non-antibiotic treatment (RR = 1.00, P = 0.99) (forest plot not shown).

Therefore, we can assume that even if a large-scale RCT was completed, the RR of the mortality rate would only range from 0.77 to 1.00 with a relatively narrow confidence interval (P < 0.05). It means, as a whole, that antibiotic prophylaxis is not effective for SAP patients. Moreover, by the sensitivity analysis, the NNT ranged from 7 to 5069 patients.

As the mortality of SAP is obviously associated with the complications of infection, prophylactic antibiotics have been administrated for SAP patients for several decades, which seemed to play an important role in the treatment of SAP. However, currently, its role is highly questioned by more and more RCTs and meta-analyses, and the controversies continue due to insufficient evidence.

Practice of evidence-based medicine is a procedure of integrating the best available external clinical evidence with clinical expertise and patient needs[28]. There should be a balance among these three aspects. If the power of current available evidence is not robust enough, the influence of clinical expertise will be inevitably enhanced. Thus, physicians are quite cautious to the available evidence due to the weakness in the meta-analyses. Firstly, the eligible RCTs are fairly small-sized and the accumulated sample size is also limited. Secondly, the validity of some RCTs in earlier period is affected by the absence of blinding method.

In the funnel plot of our updated meta-analysis, the asymmetric distribution of RCTs before 2000 implied that there might be apparent publication bias. At that period, the positive results of trials tended to be accepted for publication more easily. Therefore, most of the scholars believed that the evidence before 2000 would be weak to validate. Another critical reason is that blinding method was not used in these trials, which may result in performance and observation biases. Thus, positive results might be more easily to reach under that condition. Since the year of 2000, the improved methodology of RCTs has made the pooling estimate non-significant.

The mortality of severe acute pancreatitis (SAP) is obviously associated with the infectious complications, so prophylactic antibiotics have been administrated for SAP patients for several decades. However, the role of prophylactic antibiotics in reduction of mortality of SAP patients has been highly questioned by more and more randomized controlled trials (RCTs) and meta-analyses.

Evidence-based medicine is frequently used in clinical practice. Although there have been several meta-analyses on the administration of prophylactic antibiotics for SAP, the conclusion is still not confirmed. By now, some new reports on this topic have become available for updated review and analysis.

An updated meta-analysis on the mortality of SAP patients was performed. Prophylactic antibiotics for SAP was compared with control or placebo. Subgroup analysis showed that there was significant reduction of mortality rate in the period before 2000, while no significant reduction in the period from 2000. Sensitivity analysis by assuming an ideal large-scale RCT was performed to prove the results, and found that SAP patients did benefit from prophylactic antibiotics. In addition, current evidences do not support administration of prophylactic antibiotics as a routine treatment for SAP.

Prophylactic antibiotics, is administrated to the sterile SAP patients to prevent the potential and even fatal complications, involving both peri-pancreatic and systematic infection.

The paper investigates the role of prophylactic antibiotics on mortality of severe acute pancreatitis. The statistical analysis used in the study is appropriate and the results are reliable.