AIM: To investigate the significance of the surgical approaches in the prognosis of hepatocellular carcinoma (HCC) located in the caudate lobe with a multivariate regression analysis using a Cox proportional hazard model.

METHODS: Thirty-six patients with HCC underwent caudate lobectomy at a single tertiary referral center between January 1995 and June 2010. In this series, left-sided, right-sided and bilateral approaches were used. The outcomes of patients who underwent isolated caudate lobectomy or caudate lobectomy combined with an additional partial hepatectomy were compared. The survival curves of the isolated and combined resection groups were generated by the Kaplan-Meier method and compared by a log-rank test.

CONCLUSION: The caudate lobectomy combined with an additional partial hepatectomy is preferred because this approach is technically less demanding and offers an adequate surgical margin.

The caudate lobe is generally divided into three regions: the left Spiegelian lobe, the process portion and the paracaval portion. As these regions are supplied by different vasculobiliary branches of the portal triad and they are drained separately by branches of the hepatic veins, each region can be resected independently, thus making partial caudate lobectomy possible[5].

Thirty-six patients with HCC underwent caudate lobectomy at the Department of Hepatobiliary Surgery and Liver Transplantation Surgery, Navy General Hospital between January 1995 and June 2010. Informed consent was obtained from each patient. Surgical outcomes for patients who underwent isolated caudate lobectomy or caudate lobectomy combined with an additional partial hepatectomy were compared. The data were collected prospectively and analyzed retrospectively.

The surgeries of this series were completed over the past 15 years. The choice of approach mainly depended on the prevailing conditions and surgeon’s experience. Surgery was performed through a bilateral subcostal incision in eight patients, while a Mercedes-Benz incision was used in 28 patients. After an exploratory laparotomy, the liver was fully mobilized from all its peritoneal attachments. The liver was then assessed with intraoperative ultrasound. We carefully searched the abdominal cavity for the extent of local disease, extrahepatic metastases and peritoneal seedings. In this series, three approaches were used[8,9]: (1) a left-sided approach for tumors situated mainly in the Spiegelian lobe, or when a caudate lobectomy was combined with a left hepatectomy; (2) a right-sided approach for tumors situated mainly in the caudate process or paracaval portion, or when a caudate lobectomy was combined with a right hepatectomy; and (3) a bilateral approach for tumors situated in the whole caudate lobe. Although we started with one particular surgical approach in most patients, we had to combine different approaches to facilitate the caudate lobectomy. The suprahepatic and infrahepatic IVC was slung with vascular loops. Resection began with a pringle maneuver in cycles of 15/5 min of clamp/unclamp times. Total vascular exclusion was used only when patients had excessive bleeding from a lacerated IVC or hepatic vein. Liver resection was carried out by a clamp crushing method.

The survival curves of the isolated and combined resection groups were generated by the Kaplan-Meier method and compared with a log-rank test. To investigate the prognostic significance of the operative procedure, we performed a multivariate regression analysis with a Cox proportional hazard model, using a variable-selection method by a backward-elimination procedure. P < 0.15 was set as the cutoff for elimination. In the multivariate analysis, we chose 12 factors as potential confounders, considering their clinical significance and the results of previous reports[10,11]. Because any factors that are of potential importance can be incorporated into a multivariate analysis, whether or not they are statistically significant[12], we entered some nonsignificant factors in the univariate analysis into the model of the multivariate analysis in the present study. The 12 factors included: age (older vs younger than 65 years), sex, preoperative serum total bilirubin level (more vs less than 1 mg/dL), Child-Pugh class (A vs B), background liver status (cirrhosis vs noncirrhosis) as assessed histologically, tumor size (larger vs smaller than 30 mm), cancer spread (present or absent), tumor cell differentiation (well vs moderate or poor), serum-fetoprotein level (more vs less than 100 ng/mL), history of red blood cell transfusion (yes vs no), surgical margin (greater vs smaller than 5 mm) and tumor exposure (yes vs no). The Mann-Whitney U test and χ2 test were used for the continuous and categorical data, respectively. All statistical analysis were performed using statistical software (SPSS 11.5 for Windows, SPSS, Inc., Chicago, IL). P < 0.05 was considered to be statistically significant.

The operative procedures are listed in Table 2. Sixteen patients (44.4%) received an isolated complete or partial caudate lobectomy, whereas 20 (55.6%) underwent a complete or partial caudate lobectomy combined with an additional partial hepatectomy. Five patients required a partial resection and repair of the IVC because of tumor invasion into the anterior wall of the IVC. The left-sided, right-sided and bilateral approaches were used in 6, 4 and 26 patients, respectively. 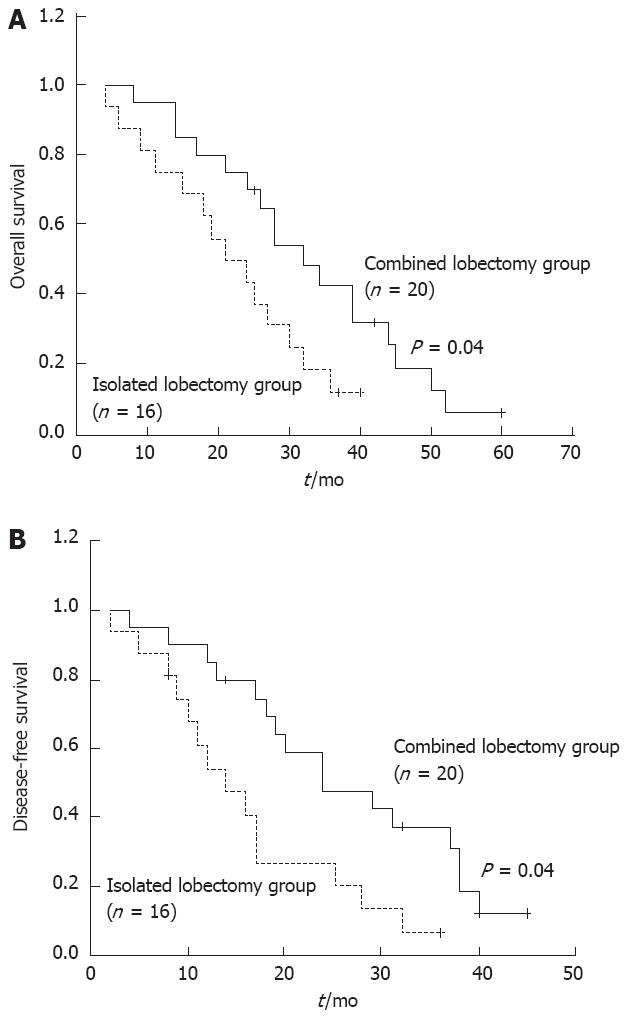 Although studies on caudate lobectomies have been increasingly reported, most of them were single case reports or small series reports[13-15]. Some series contained cases of caudate lobectomy carried out for microscopic involvement of hilar cholangiocarcinoma[16]. Comparative studies are very rare.

We found that the isolated resection group had a worse long-term prognosis than the combined resection group. The main reasons were related to the following factors. First, the caudate lobe HCC was very close to the other lobe with limited growth space. Especially when the tumor was located in the paracaval part, it often infiltrated the other lobe, such as segment IV, V, VI, VII or VIII. Due to the unclear boundary, an isolated resection of the tumor could not achieve a complete resection. Second, the caudate HCC was often close to the main branch of the main portal and hepatic veins, which increased the likelihood of vascular invasion leading to an inadequate surgical margin. A caudate lobe resection combined with the other lobe could obtain a clear exposure and acquire a more adequate surgical margin. Third, from the no-touch point of view, repeated over-turning and pulling on the caudate lobe can cause HCC cells to transfer to other locations along the portal vein and hepatic vein, increasing the possibility of metastasis in the isolated resection. Although the anterior approach can avoid this problem, its application is limited by varying degrees of liver cirrhosis. The anterior approach required segment IV resection, which prolonged the operation time and increased the amount of bleeding[21]. Obtaining a negative margin may not be easy particularly in large and very large HCC, especially for those located in the caudate lobe[22-24]. Therefore, the style of the combined resection can solve the above problem, which is an optimal method. We advocate that the caudate lobe should be ablated from the combined adjacent lobe to get an adequate margin and reduce the stretching and compression of the tumor, thereby achieving a good long-term prognosis.

If confounders in a multivariate analysis are limited only to the significant factors in a univariate analysis, some factors, which are not significant despite their potential importance, may be excluded. Therefore, according to Tralhão et al[25], we chose 12 factors as confounders, after weighing their clinical importance, whether or not they were significant in the univariate analysis. Indeed, this method was also adopted in a previous study[26,27]. The present study indicated that anatomic resection would be a suitable option of choice for HCC. Our multivariate analysis showed that liver function was an important prognostic factor for the overall survival, though the Child-Pugh class between the two groups showed no difference. In the other study, we found that segmentectomy or lobectomy might be recommended as an initial treatment for patients with good hepatic function and a solitary hepatic nodule because such patients have a chance of achieving long-term survival and wider surgical resections could minimize the chance of microscopic residual tumors or occult metastases[28-32].

The caudate lobe is a segment of the liver that is surgically difficult to approach because of its location deep in the hepatic parenchyma, which is surrounded by branches of the porta hepatis, the hepatic veins and the inferior vena cava (IVC). Caudate lobectomy is commonly indicated for hepatocellular carcinoma (HCC). Currently, caudate lobectomy remains a technical challenge, even for experienced hepatic surgeons. This study gives some instructions for hepatectomy for HCC located in the caudate lobe, with the choice of isolated or combined lobectomy.

This study showed that, in patients with sufficient liver functional reserve, a caudate lobectomy combined with an additional partial hepatectomy is preferred because such an approach is technically less demanding and achieves adequate surgical margin. However, for patients with marginal liver functional reserve, the viable surgical option is an isolated caudate lobectomy.

This manuscript emphasizes the optimal surgical approach for HCC in the caudate lobe. The manuscript sections are very clearly described and the conclusion is an opened door for further investigation. They observed that the 16 patients who underwent isolated lobectomy had longer operative times, greater blood loss, a higher complication rate, longer hospital stays and higher mortality. They concluded that, in patients with adequate functional reserve, combined hepatectomy is the preferred choice.